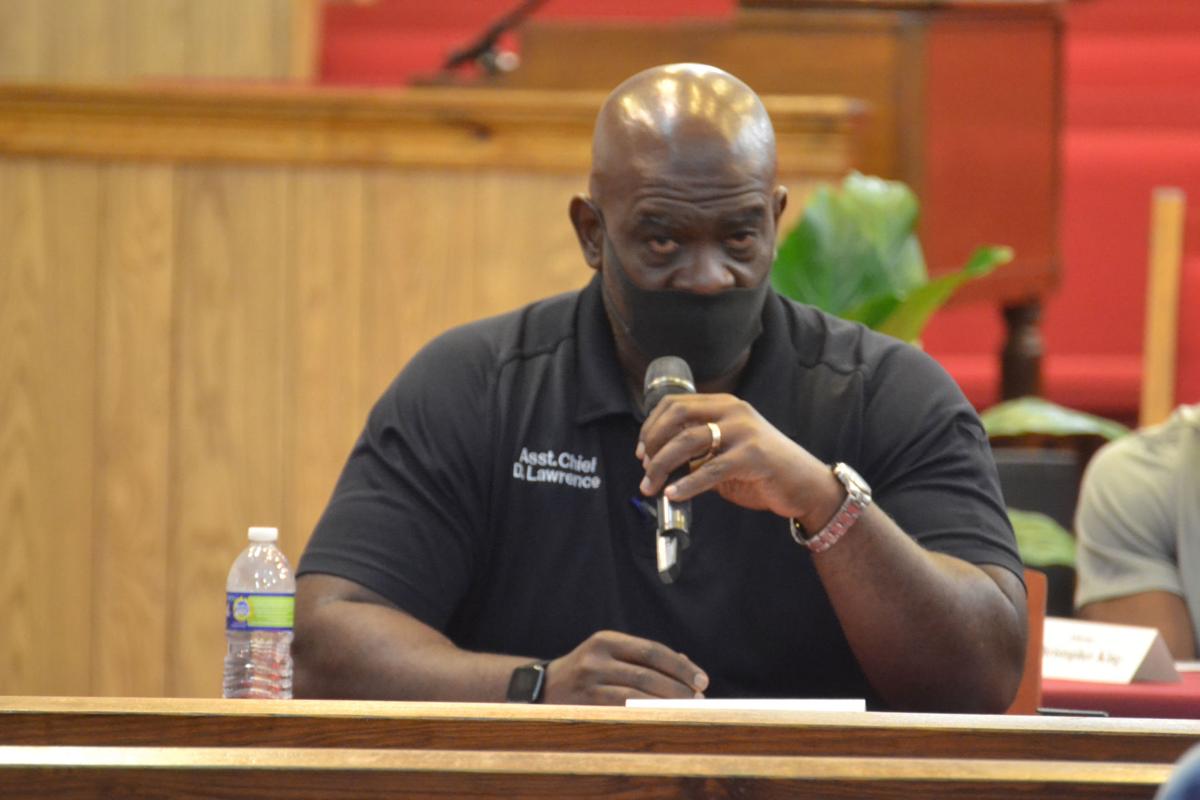 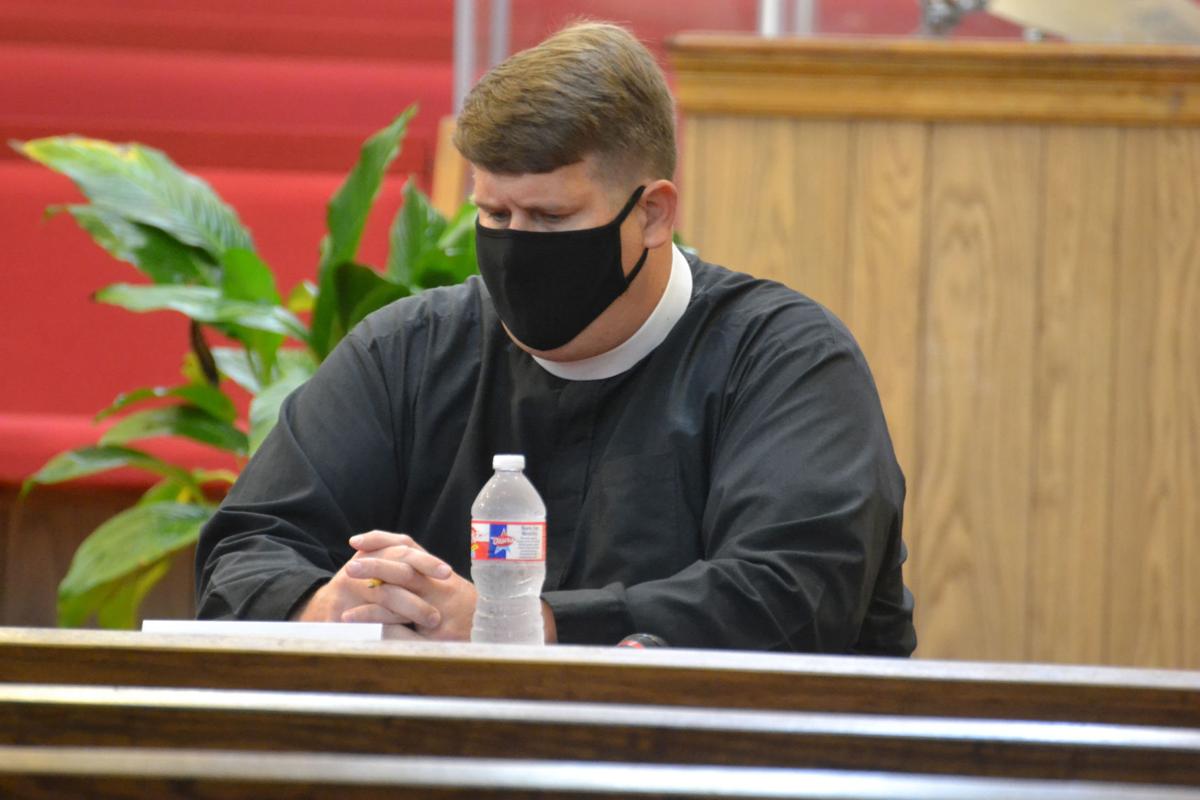 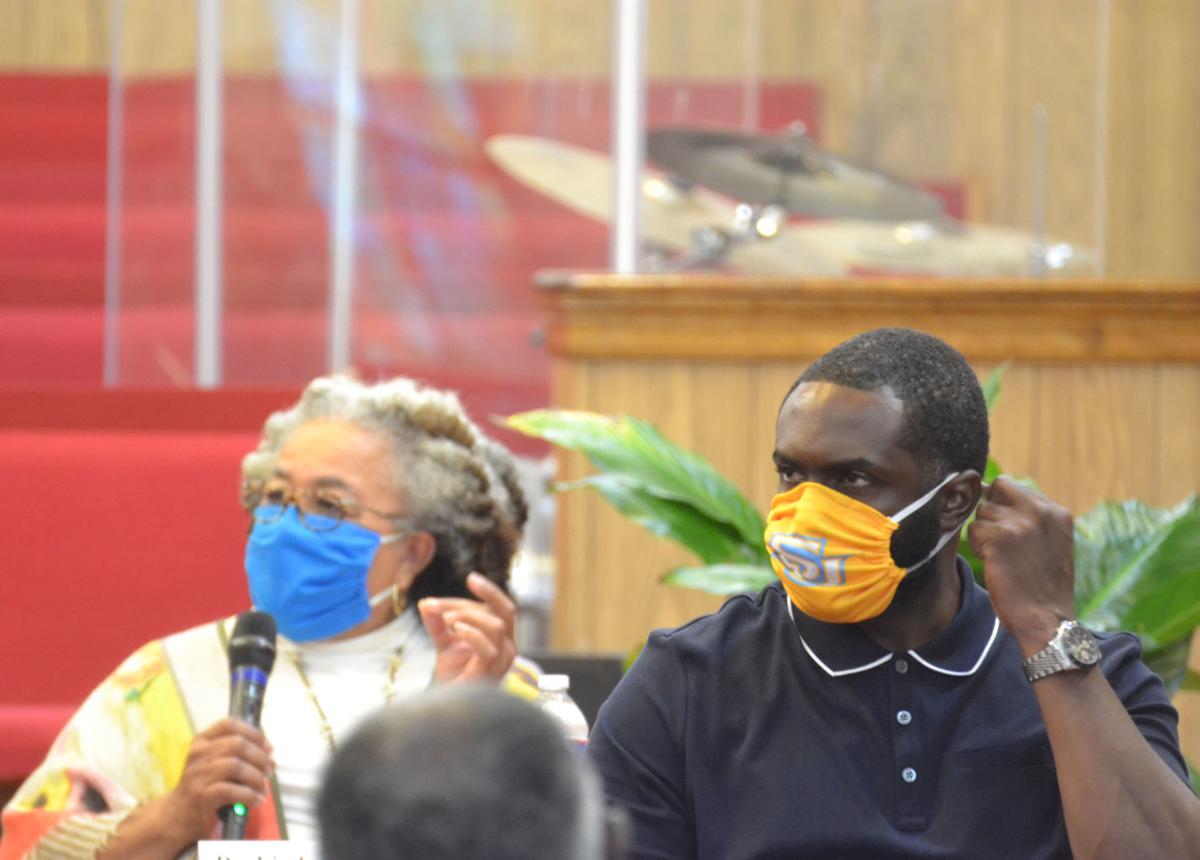 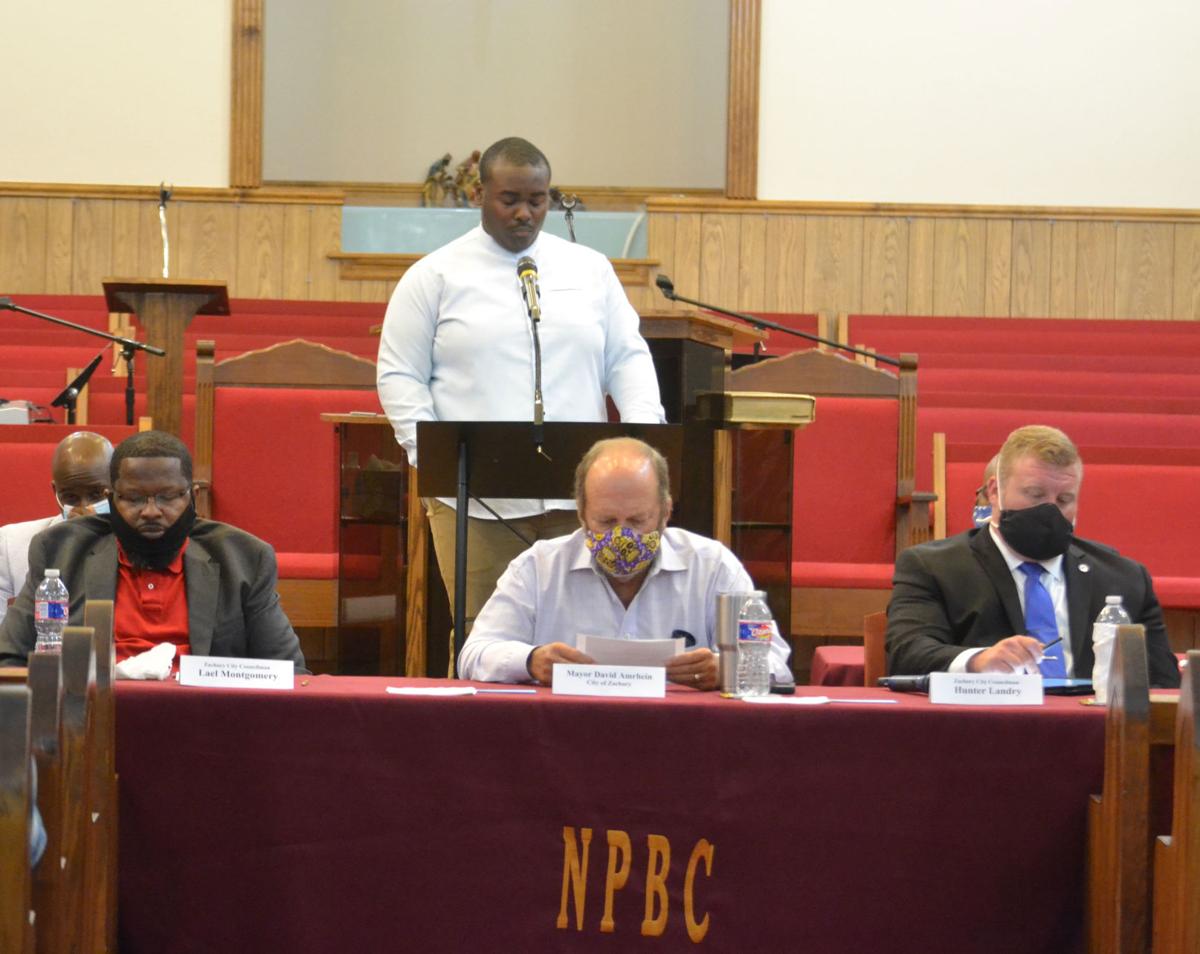 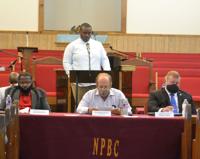 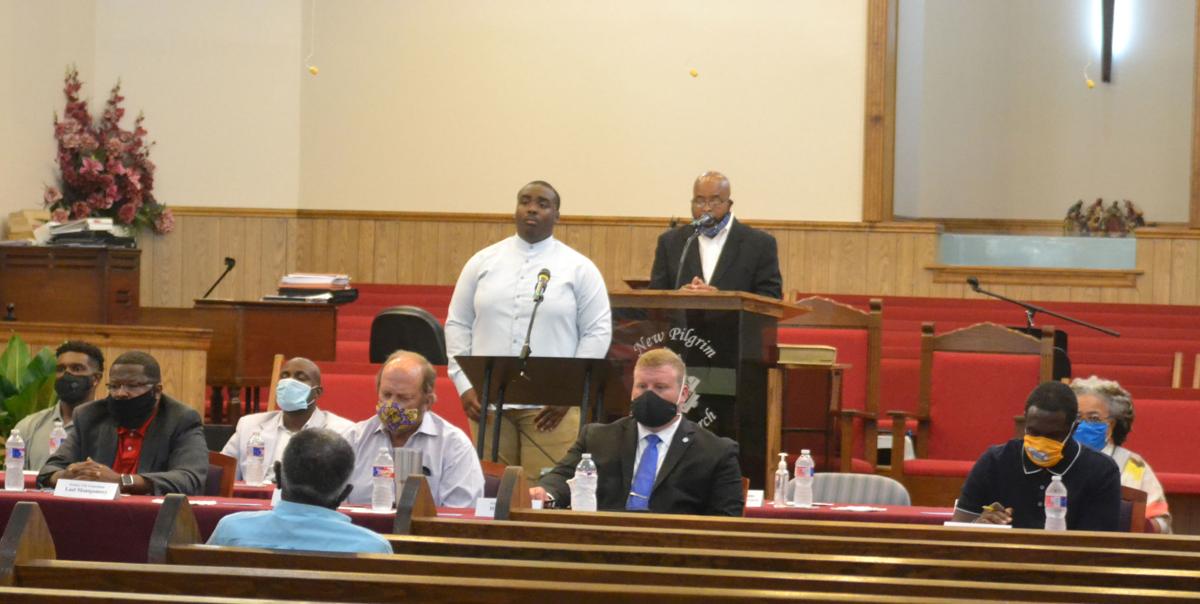 Area officials shared their thoughts about race relations, social justice and police reform in Zachary in a panel discussion on June 26.

Part of that group grew up in Zachary. David Amrhein was elected to the City Council and has been the city's mayor for about a decade. Darryl Lawrence spent 30 years on the Zachary Police Department rising to the position of assistant chief. Lael Montgomery left Zachary to serve in the Navy, returned to work as a substance abuse counselor, and was elected to the City Council. Hunter Landry became a teacher and serves on the City Council. Myles Snowden, a recent graduate of Zachary High, represents a new generation and Zachary’s future.

Snowden and a group of young people organized the panel discussion that proceeded the recent March of Solidarity in response to the racial unrest sparked after George Floyd was killed at the hands of Minneapolis police officers.

Snowden’s first question involved steps to ease racial division and address systemic racism. The panelists agreed that racism should not be tolerated but differed on next steps.

“I believe that bias and racism are two totally different things,” Amrhein said.

The mayor was encouraged by the city’s record of improving the number of African American and female department heads in the last decade and in his three terms as mayor. “The changes are slow; I was born and raised here, and I’ve seen the bad times in Zachary, but I have also witnessed some good times in Zachary,” he said. “I made a commitment and I promised that I would have a diverse administration and I would have an inclusive administration.”

Amrhein admitted that advances don’t mean there’s no room for improvement. He said he thought adversity has often brought out the best in Zachary. “It’s a shame that it takes a tragedy to pull the community together,” he said. “After the 2016 shooting in Baton Rouge and the 2016 flooding in Zachary, it didn’t matter if you were Black or White, people just came to help you.”

Fontenot applauded the mayor for the diversity on his staff but said those external appearances of diversity don’t always eliminate the internal environments of bias. She said problems stem from “where you have internal biases, which forms into hate and disparity among people. Until we actually address that, we can have equality in terms of numbers or gender or races, but if we have a concern when the person is passed up for a promotion and it looks like or appears it is done because of that person’s qualification other than color, the problem becomes who was most qualified and what were the underlying factors that prompted this kind of movement.

“Those are the kind of things that we call ‘systemic’ because it’s been around for so long and we have never really addressed it because we can get away or get by with being kind or accepting of people of different colors in our fellowships and in our congregations,” Fontenot said. “Those are the types of things that need to be addressed or we will still be at the point that we have been for the last 500 or so years.”

Moving forward on social justice issues can’t happen until all segments of society can admit that there’s a problem, said Montgomery. The “good old days wasn’t good for us” he said reflecting on his childhood and being taunted, verbally abused, and made to feel different and unwelcomed as he hit 39th Street as the sun went down. “Race relation needs to improve, but before it can improve, we have to first admit that we have problems, and America has not fully admitted she has a problem,” he said.

Lawrence, several years Montgomery’s senior, said he could not hit 39th Street any time of the day. “There have been some changes,” Lawrence said. “I live in an area I could not have lived in when I was a kid.”

“Is it perfect?” Lawrence asked. “No, but is it getting better and is it better than it was? Yes, it is.”

After systemic racism, a major topic was the Black Lives Matter Movement and the calls for police reform and to prevent police brutality. “(The) Black Lives movement stems from the murders of Black people by police officers,” Johnson said, adding Black lives must include trans, queer, gay and lesbian lives for the movement to complete and effective.

Councilman Landry said Freeman helped him understand the significance of defending Black Lives Matter. “If my mother calls me and tells me she’s having a bad day, I’m not going to say ‘oh, mom,’ everybody has bad days,’” he said. “In the same regard, I do try to understand why it’s insensitive or dismissive to say ‘all lives matter.’ We should be working toward simply being better human beings to other human beings and there’s no way you can do that until you have the uncomfortable conversations that enable to figure out what is it that is wrong with me that I can address to be a better person.”

Montgomery said he feels the most disrespectful response to Black Lives Matter is “Blue Lives Matter.” “You’re a police, but you just put on a blue uniforms,” Montgomery said, referring to Lawrence seated next to him. “Your life is not blue; blue is a job.”

The exchange prompted an immediate response from Williams who is both a pastor and a retired police officer. Williams, while sympathetic to the victims of police brutality did not think the term “blues lives” should be seen as disrespectful. “We are here to make inroads into what it would take that we would recognize,” he said. “Cause every morning that I got up and put on that uniform, cause what, I was Black and I retired Black and I am still Black and every life matters.”

The Zachary assistant police chief responded, “I want to explain that I am 100% Black male,” he said. “I am probably one of the most proud Black male you want to meet. What I do for a living is a calling. Deep down in my heart, I am a protector.”

“Now, do Black lives matter? Yes,” he said adding “Blue lives matter too, and it’s not a disrespectful term.”

Later in the panel discussion, Lawrence laid out policies and training procedures in the Zachary Police Department to prevent hiring problem candidates and to address internal complaints against officers. Williams offered to help create a committee of private citizens that could serve as mediators between residents and the police department during the complaint process.

A small committee of young people were recognized for their work in organizing and facilitating during the panel discussion. Snowden, the moderator was a member of the 2018 Zachary High football State Championship team, a 2019 graduate of Zachary High, and is a mechanical engineering major at Southern University.

He said it is important for young people to take lead because eventually they will be in positions of power. “Soon the decisions being made will fall in our hands, and it is important that we have the right people in those positions so that everyone is impartially represented,” Snowden said. “We have gotten the blueprint from our uncles and aunts, and even parents, who were some of the first people to integrate the high school and integrate society. They have done their part and it is our turn to continue the fight for change, so one day our children won’t have to worry about being discriminated against in every aspect of their lives.”