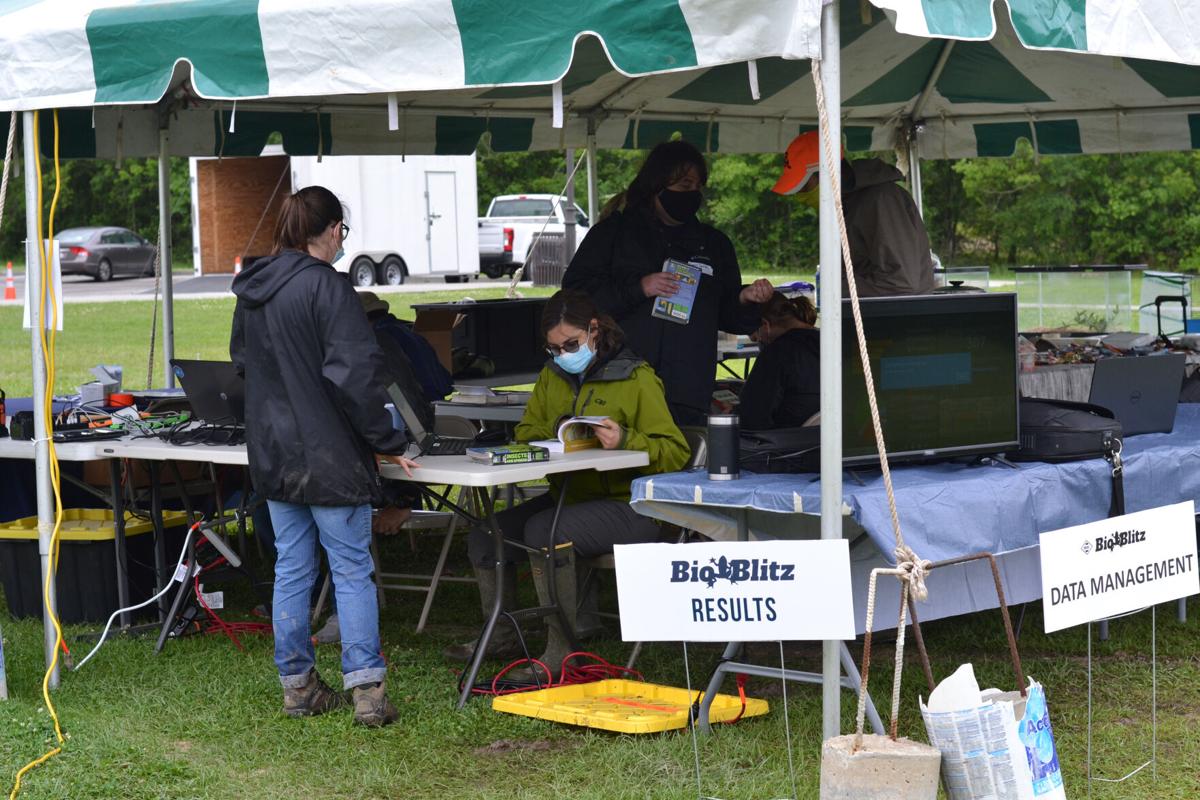 BREC’s Conservation division held its 5th annual Bioblitz Saturday, April 17 at the Zachary Community Park. A Bioblitz is an intense period of biological surveying to record all of the living species within a designated area. 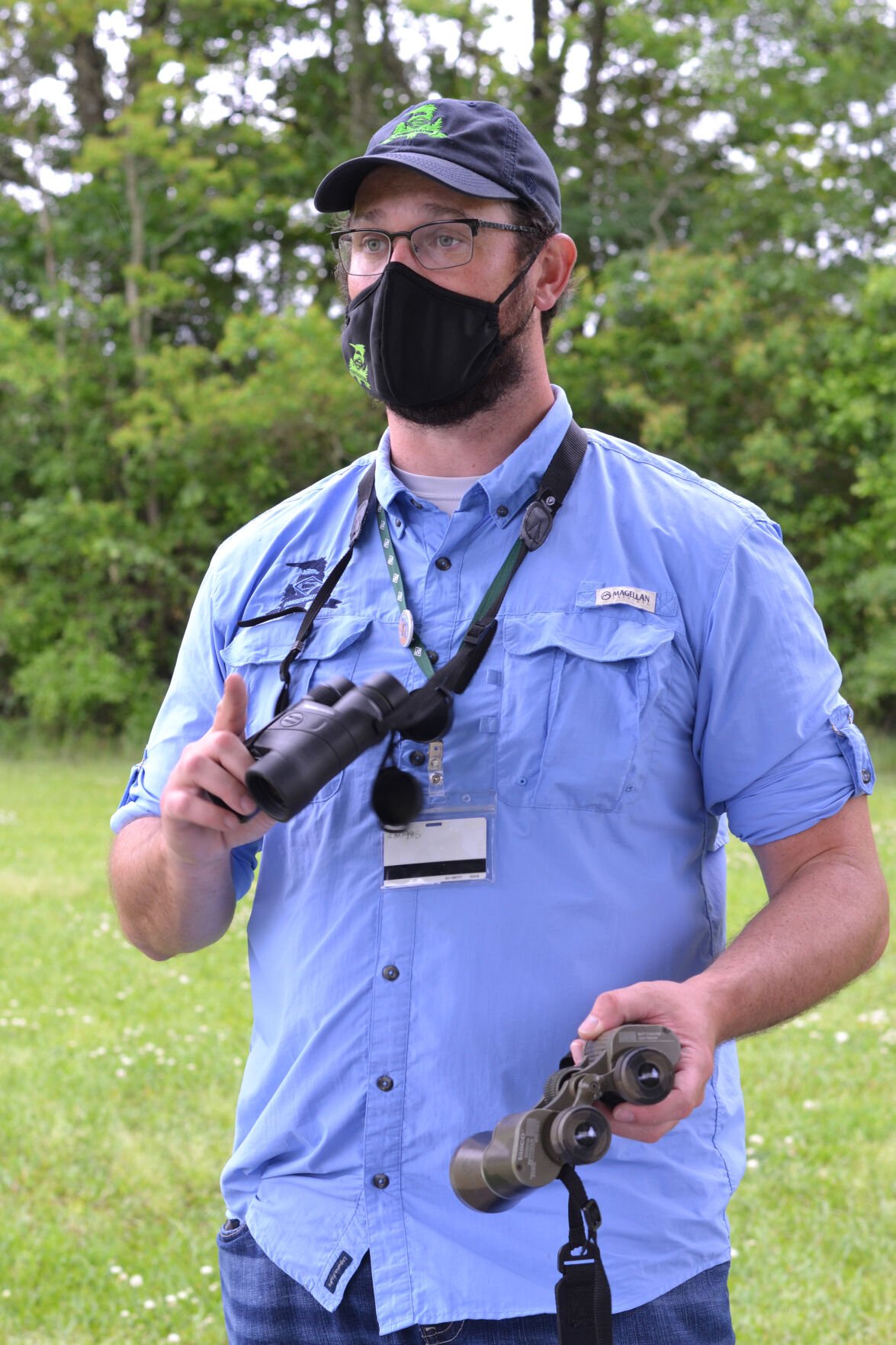 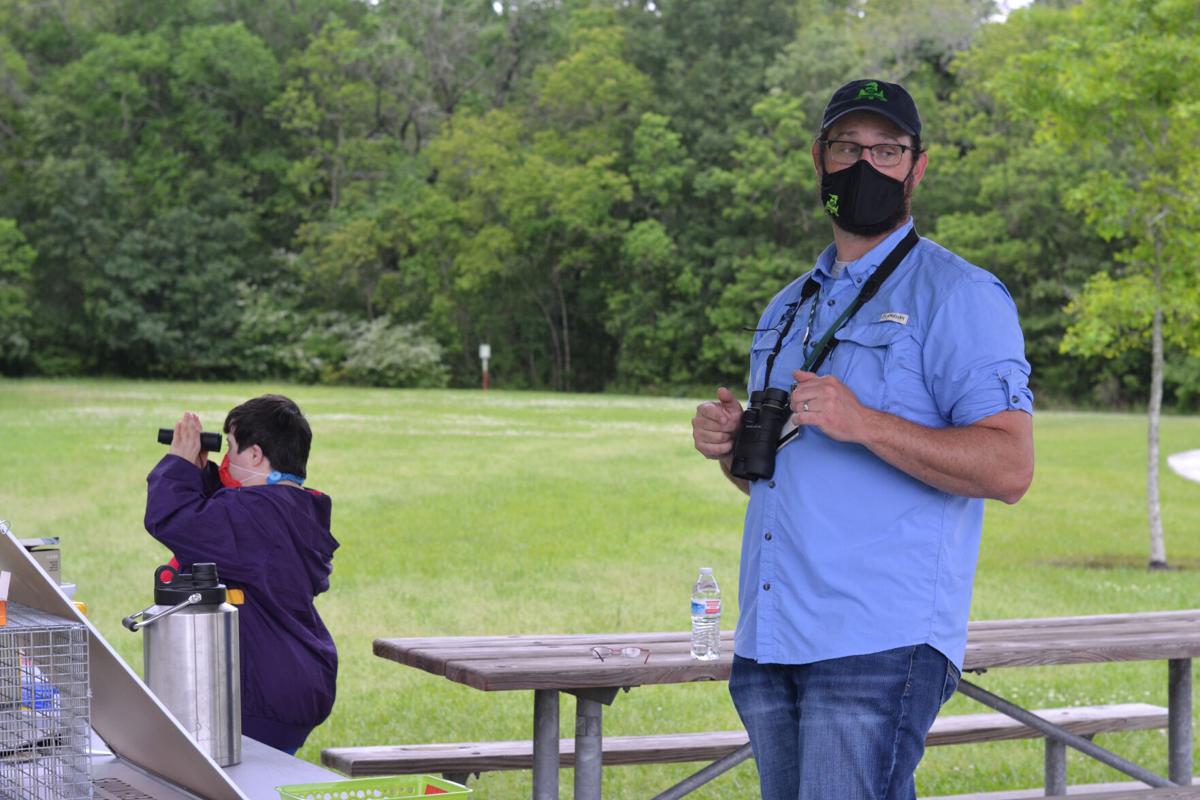 Kenneth LeCroy, right, a naturalist and conservation manager with BREC, gives Gia Gervais tips on using her binoculars to watch and identify birds Saturday, April 17 during the 5th annual BioBlitz held at the Zachary Community Park. 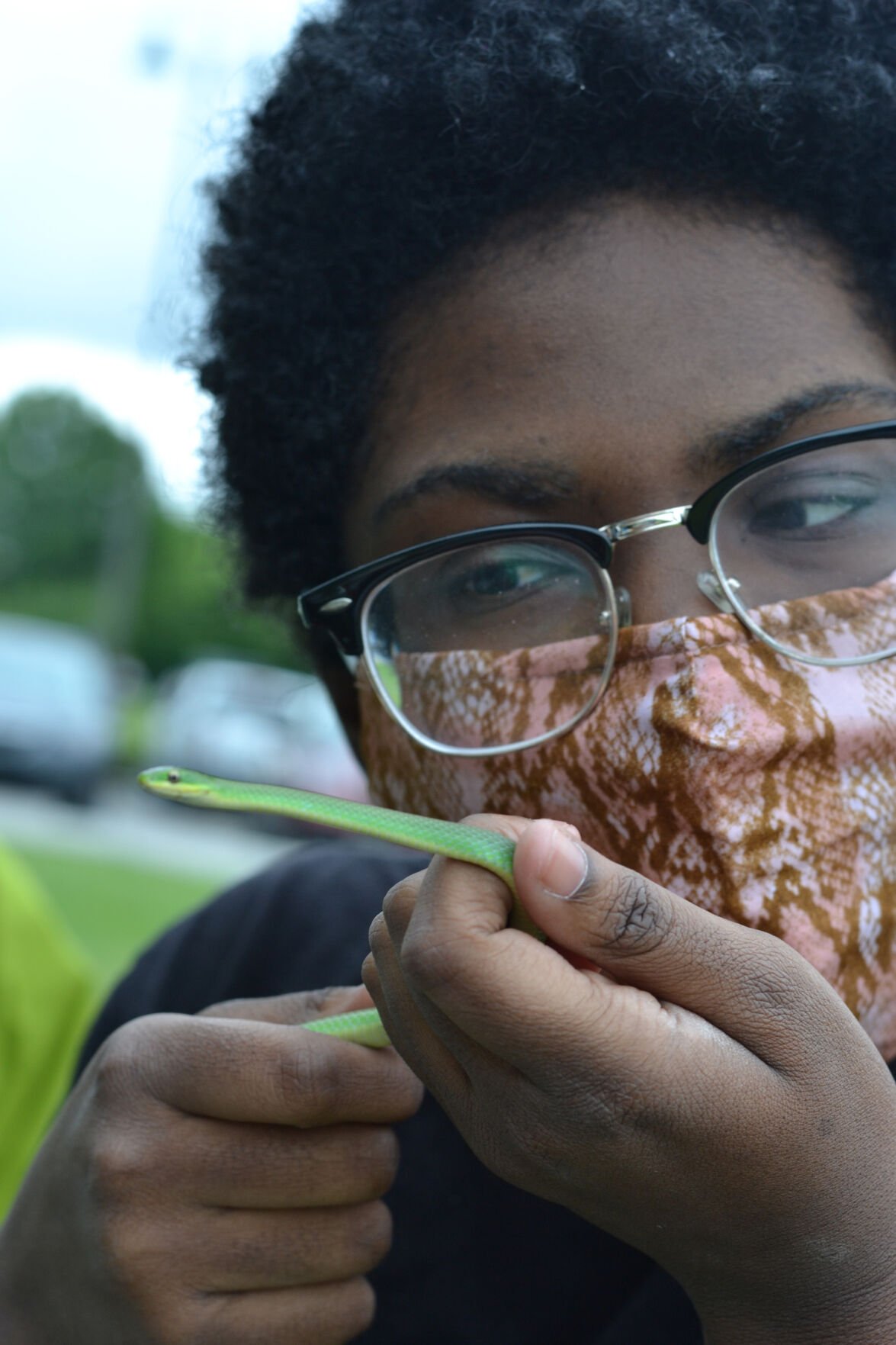 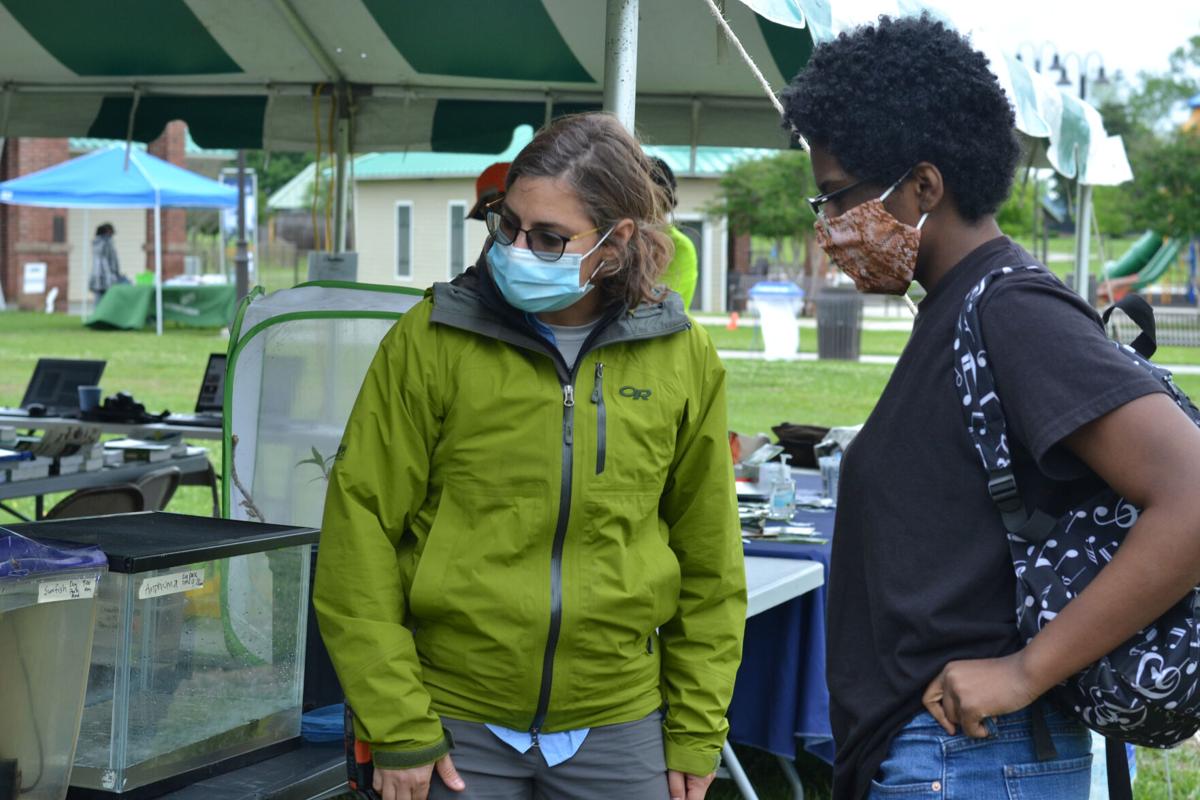 BREC’s Conservation division held its 5th annual Bioblitz Saturday, April 17 at the Zachary Community Park. A Bioblitz is an intense period of biological surveying to record all of the living species within a designated area.

Kenneth LeCroy, right, a naturalist and conservation manager with BREC, gives Gia Gervais tips on using her binoculars to watch and identify birds Saturday, April 17 during the 5th annual BioBlitz held at the Zachary Community Park.

A walk in the park proved to be more about science and nature than about swings and sliding boards. Naturalists and citizen scientists gathered April 17 for Bioblitz, the annual weekend dedicated to recording as many species within a designated location and time period as possible.

BREC’s fifth Bioblitz was held at Zachary Community Park and included workshops, species identification, and a series of nature walks in the trails on the perimeter of the park. Activities planned were canceled April 16 when storms brought heavy rain to the region, but participants equipped with slickers and rain boots took part in the Saturday events and workshops.

Bioblitzes are a national trend that engage the public to connect to the environment while generating useful data for science and conservation. They are also an opportunity for naturalists, scientists and area residents to meet in the great outdoors.

Command Central was set up near the park’s entrance and housed a mini zoo of bio specimens found in the parish and stations for participants to submit data and results. Amanda Takacs, BREC’s assistant director of Natural Resource Management, said the exhibits and finding held to provide a bio snapshot of the surrounding area.

Snakes on display in the mini zoo were popular with the citizen scientists, including children and teenagers, who were able to observe and sometimes hold the slithering samples. Takacs said those snakes and other samples on display tell an important story about biosphere that surrounds this community. “Most of them are native and we obviously want people to have a better understanding of the native plants and animals that we have in the parish, she said. “At the same time, we do have exotics here and we want to document those as well so that we understand what potential management strategies we need to move forward with.”

Not all species found will be beneficial. BREC Conservation is playing an important role in finding and controlling invasive plants, animals and insects that can be harmful to native species.

“This event is not only about just highlighting the good stuff, but it gives us data that we can use moving forward to maybe help get rid of bad stuff and it gives us a baseline,” Takacs said. “Maybe there's something happening out here that is causing a decrease in native species and we need to figure out what it is.”

Guided survey hikes were held during the Bioblitz that gave participants an opportunity to meet scientists and learn about various groups of species on the Zachary nature trail. The four types of hikes focused on plants, aquatics, insects and spiders, and reptile and amphibians. Nature hikers used the iNaturalist phone app to document findings on the trail.

The Bioblitz workshops offered a classroom-like study (in a tent) of the areas covered in the nature hikes, but in specific detail. Naturalist Kenneth LeCroy, Conservation manager at BREC, led workshops that explored bird call identification and “Binoculars and Birding,” a workshop that both covered the proper use of binoculars and how to recognize common bird species found in the area.

LeCroy had paper samples of birds set out in trees to help participants learn to use the binoculars, but a lifelike paper cardinal even fooled a real cardinal that seemed upset by the invasion into his territory. LeCroy offered general categories like size, color, and features to help pin down bird identification.

“What you want to do first is get the general size of the bird,” he said. “And you can do comparisons from that — bigger than a robin, but it's not as big as a as a hawk. You can kind of adjust the size from there.”

Other categories to help in identification included body form, beak appearance, and color. “So, with the cardinal, red narrows down your list, but there's other birds that are red,” LeCroy said. “The next thing we got the crest. The crest is going to be the big giveaway because a lot of the red birds don't have the crests on them.”

Takacs and LeCroy’s work highlights an evolution in parks and recreation services. The BREC Conservation Department paired with Natural Resource Management has joined efforts to protect local habitats and biodiversity. “So, we manage the trails, we collect data, we do invasive species control and we kind of do a lot of like the behind-the-scenes science stuff,” Takacs said. “And then Kenneth’s group does the programming side.”

The Conservation staff develops programming — nature walks, bird watching and fishing — that engages patrons across the parish. “We take their information and develops it into something where you all can use it,” LeCroy said.