Zachary High's 5A state basketball champs take the mound as they through out the first pitch. 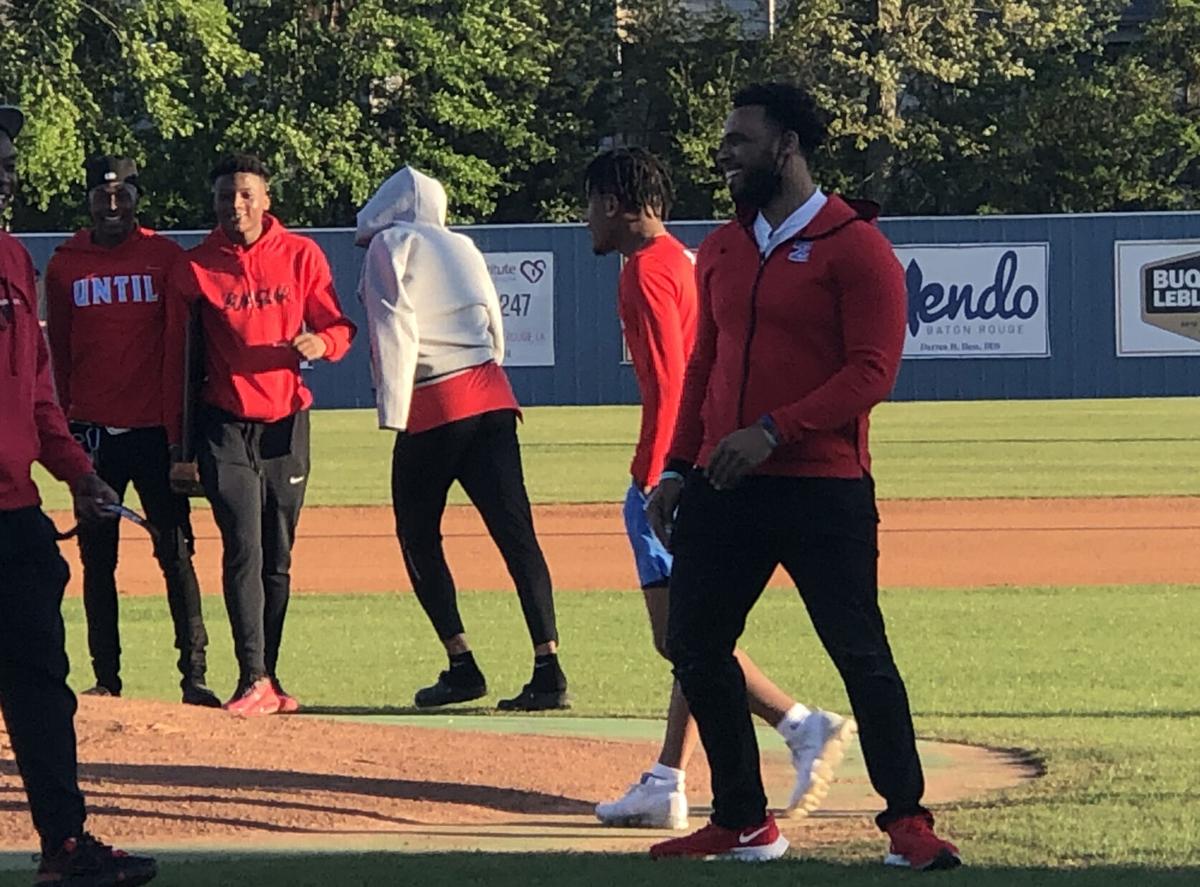 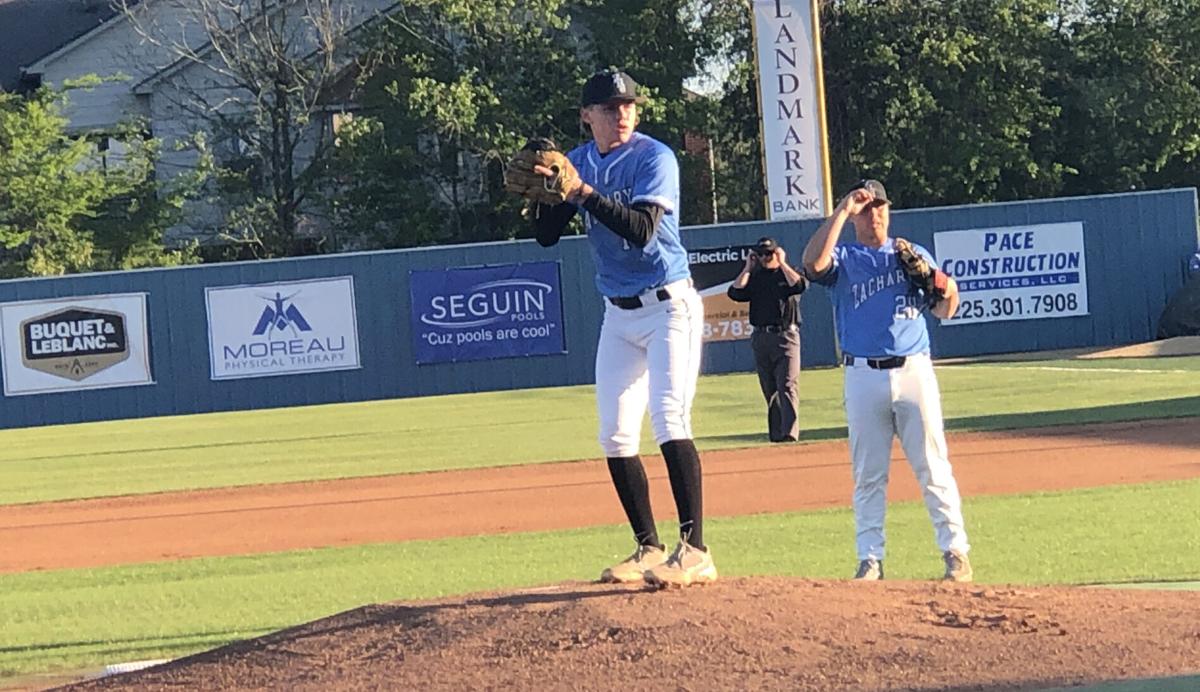 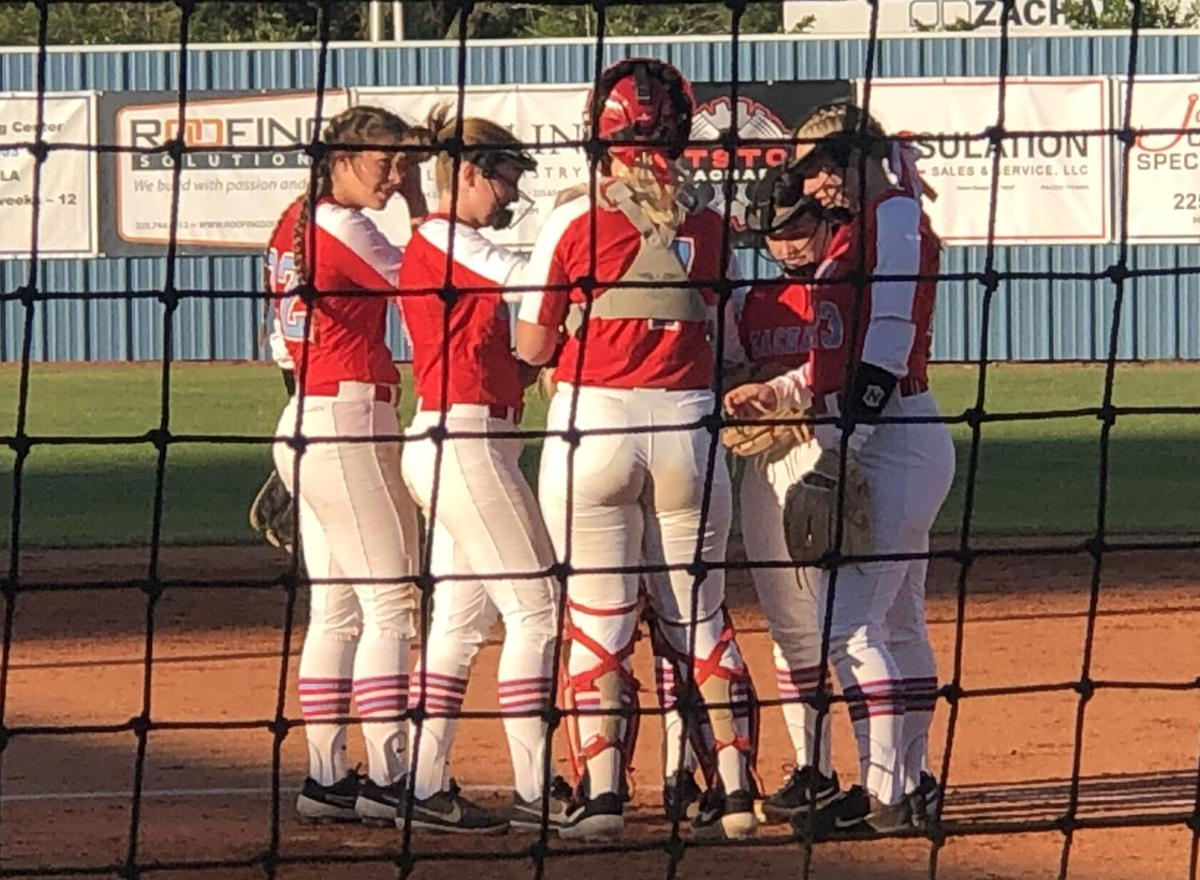 ZHS softball team with a huddle at the mound during a recent game. 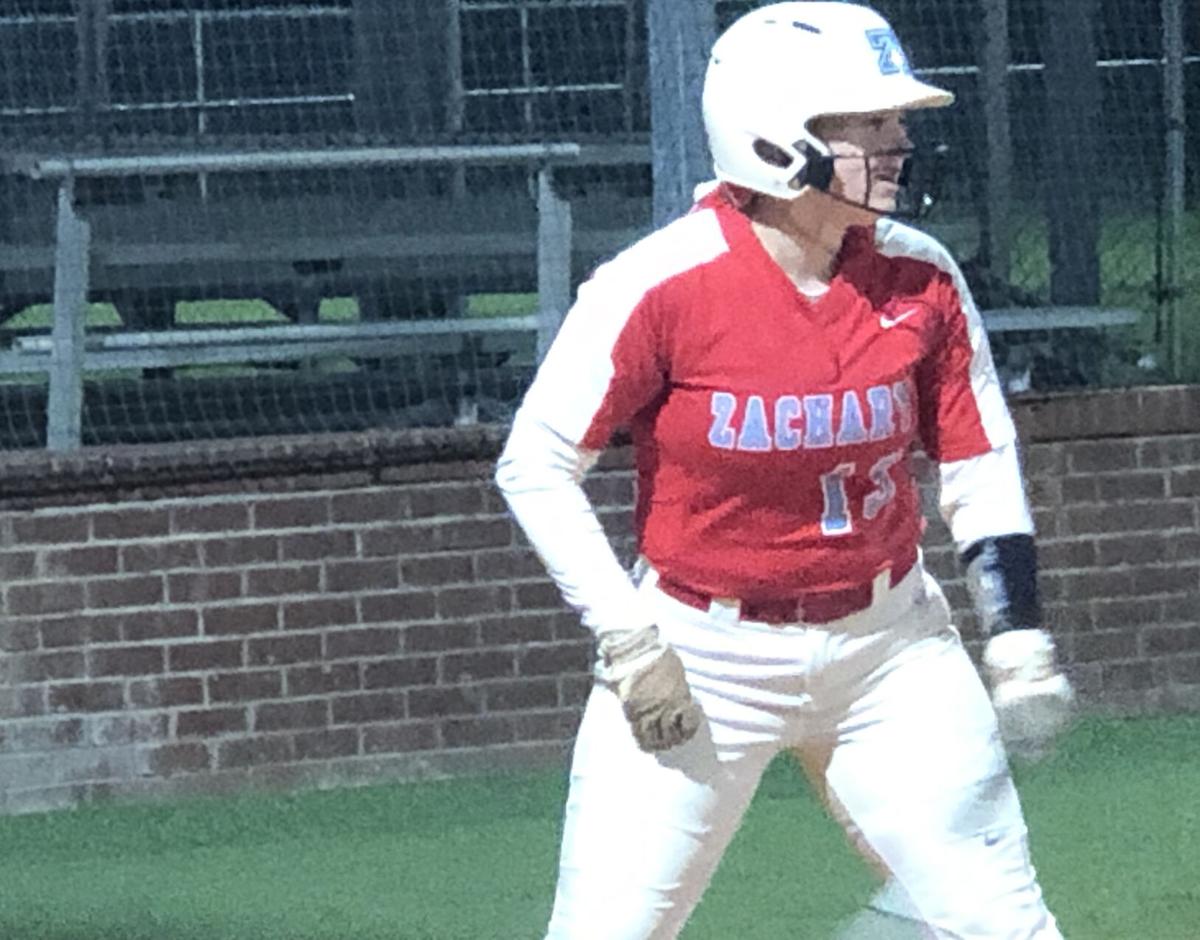 Anna Lewis prepares to swing during a recent outing. 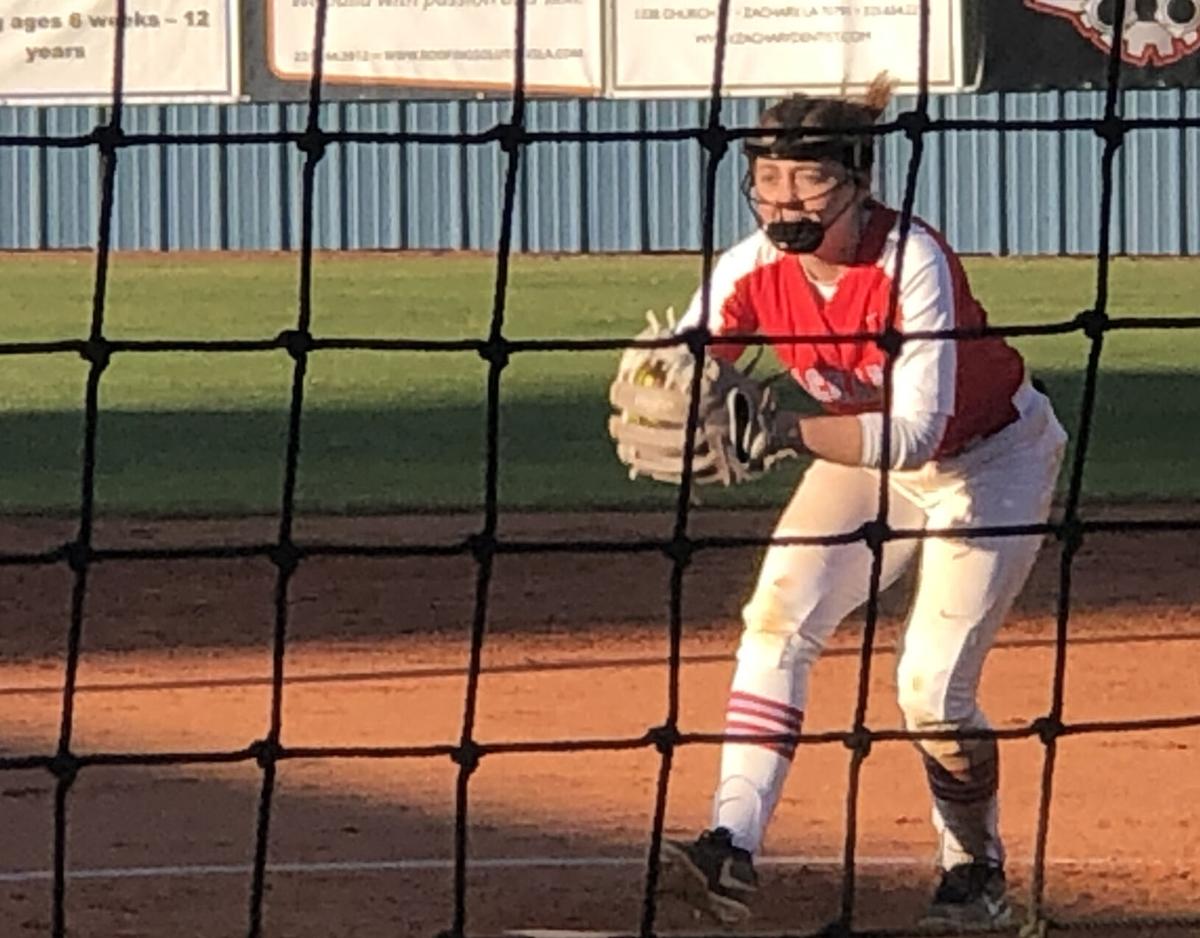 Zachary High's 5A state basketball champs take the mound as they through out the first pitch.

ZHS softball team with a huddle at the mound during a recent game.

Anna Lewis prepares to swing during a recent outing.

The first day of April provided a smorgasbord of Zachary High School sports. Within a half-mile radius, there was a celebration of the 2021 5A State Basketball Champions at Walk-On's, a home district 4-5A softball game between Zachary and Denham Springs and, across the parking lot at the Zachary Youth Park, a home 4-5A district baseball game where the Broncos would take on former coach Jesse Cassard and the Live Oak Eagles.

The basketball celebration, which included a parade through town, extended to the baseball game where the 5A state champions were recognized and coach Jon McClinton and his five seniors threw out the game’s first pitch. That is definitely the first time I have seen six people throw out the first pitch or pitches.

The Zachary baseball team had a 12th power ranking at the time of writing with a record of 12-9. After a tough series against top-ranked Barbe on March 18 and 20, the Broncos rebounded the following week to take two of three from Catholic High on March 26-27. Their opponent, Live Oak, has rolled out to a 20-4 record and a four power ranking.

In the 4-5A opener for both teams, scoring was slow early on and the score was 0-0 at the end of three, with Zachary pitcher Braden Clark holding the Eagles batters to two hits.

Trying to catch as much sports as possible to officially kick off April 1 with a bang, I walked across the parking lot to check on the softball game. The Lady Broncos came into the Denham Springs game with a 11-11 record, looking for their first win over a district 4-5A opponent.

The Lady Broncos have a 18 power ranking, which would put them in the playoff but on the road for the opener. Denham Springs would come into the game with a 10-9 record, power ranking of 25 and a previous win over the Lady Broncos (12-6) on March 16.

The Zachary softball game started before the basketball team recognition and start of the baseball game. When I walked across the parking lot earlier to watch the festivities, the Lady Broncos were down by a score of 0-4. When I returned three baseball innings later, the Lady Broncos had a commanding, or so I thought, 10-6 lead over the Lady Yellow Jackets in the fifth inning on the strength of two Anna Lewis home runs.

Denham Springs then rallied to score three runs to narrow the score to 10-9 on a home run with no outs in the fifth. Pitcher Bailee Avants got the next two batters to pop up and, after giving up a single, got the third out of the inning on a fly ball.

The Lady Broncos were unable to score in the bottom of the fifth inning and clung to a one-run lead.

In the top of the sixth inning, the Lady Broncos retired the first two batters before Denham Springs got a two-out base hit. Avants walked the next two batters to load the bases and a base hit tied the score before Avants was able to strike out the next batter to retire the side.

The Lady Broncos erupted again in the bottom of the sixth. Lewis was the leadoff batter, and Denham Springs smartly gave her a free pass to first base on a walk. Madison Martin followed with a drive to left field that turned into a double and put Lewis on third base.

Carly Fudge’s grounder resulted in an out but scored Lewis from third to give the Lady Broncos an 11-10 lead. Martin’s stole second to give Zachary runners on second and third base with no outs. Another walked batter and the bases were loaded for Taylor Palmer, who proceeded to crush a double to left field to score two more runs.

The Lady Broncos picked up two more runs including an RBI on a single by Kayden Labouliere to extend the lead to 15-10 going into the seventh. Deep fly balls that appeared to leave the park on a cold night were caught by the Lady Broncos oftentimes on the warning track to close the game out in the top of the seventh and secure the victory.

“I’m so proud of our athletes for persevering and getting a big district win. Denham competed until the very end, but I could tell our ladies were hungry for that victory and were going to make the plays and score the runs to come out on top,” coach Courtney Barbour said.

Barbour further noted that “Some of our veterans really came up big. Anna Lewis had two home runs and Bailee Avants throwing a great game in the circle. But we also had a sophomore, Hailey Gleason, start a huge rally for us as a pinch hitter.”

The Lady Broncos will close out the home regular season with a district game against Central on April 8 and non-district games against Parkview Baptist on April 9, and East Ascension on April 10.

“It’s so fun to see them all work together like that. Now our focus is to keep this energy rolling into the rest of our schedule and deep into playoffs” Barbour said.

On the other side of the park, things went south for the Zachary baseball team as it fell behind 2-0, fought back to get another run but fell just short and lost its district opener 2-1. The Broncos will finish the home district schedule against Scotlandville on April 13, Central on April 15 and Walker on April 22 to end the regular season.