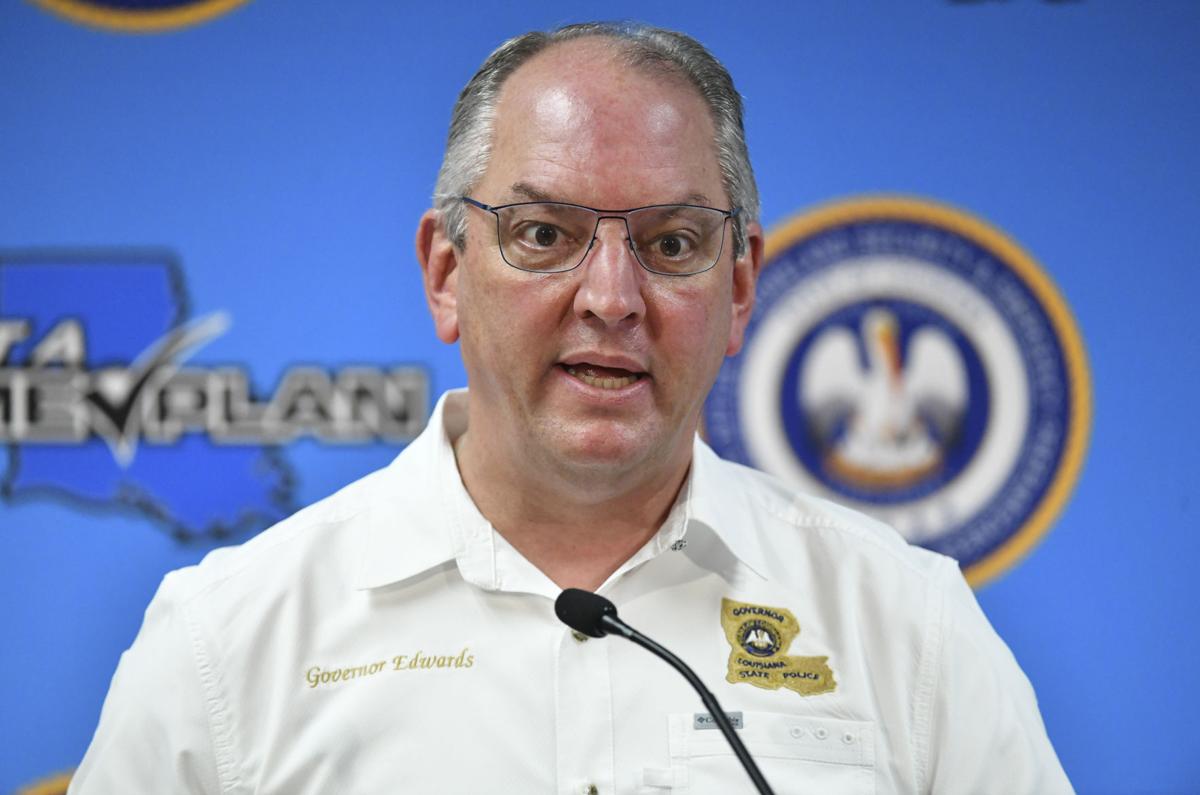 Governor John Bel Edwards speaks during a press conference, Saturday, July 11, 2020, at GOHSEP in Baton Rouge, La. Edwards announced that beginning Monday at 12:01 am, bars would be closed to on-premises consumption and there would be a statewide mask mandate across Louisiana. 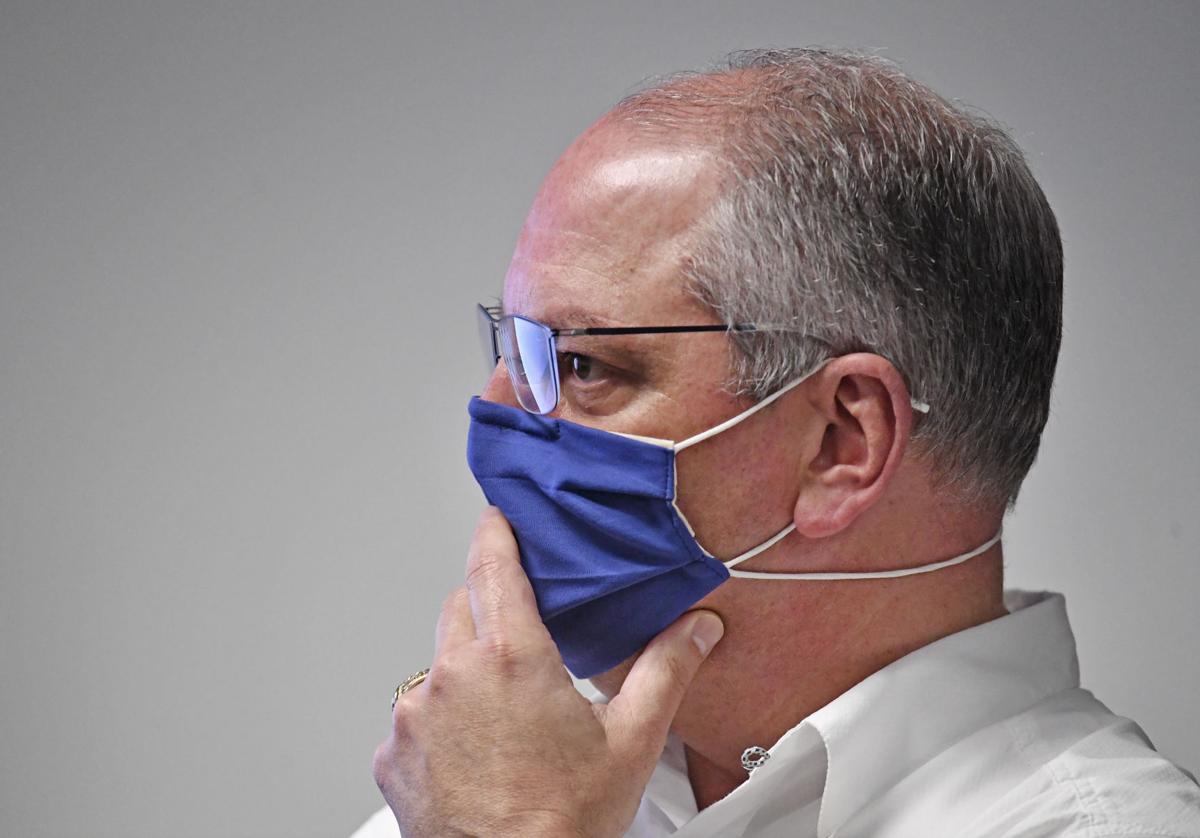 Governor John Bel Edwards listens intently as Dr. Joseph Kanter speaks during a press conference, Saturday, July 11, 2020, at GOHSEP in Baton Rouge, La. Edwards announced that beginning Monday at 12:01 am, bars would be closed to on-premises consumption and there would be a statewide mask mandate across Louisiana.

Governor John Bel Edwards speaks during a press conference, Saturday, July 11, 2020, at GOHSEP in Baton Rouge, La. Edwards announced that beginning Monday at 12:01 am, bars would be closed to on-premises consumption and there would be a statewide mask mandate across Louisiana.

Governor John Bel Edwards listens intently as Dr. Joseph Kanter speaks during a press conference, Saturday, July 11, 2020, at GOHSEP in Baton Rouge, La. Edwards announced that beginning Monday at 12:01 am, bars would be closed to on-premises consumption and there would be a statewide mask mandate across Louisiana.

Louisiana neared 80,000 coronavirus infections Monday following a rapid rise in cases and hospitalizations this month, a trend that has raised alarms for state and federal leaders, prompting a statewide face-covering order and which comes ahead of a Tuesday visit from Vice President Mike Pence.

Gov. John Bel Edwards’ order requiring people wear face coverings in businesses and other public areas went into effect Monday for most of the state, but it was met by a steady drumbeat of parish and city leaders who expressed discomfort with the new requirement.

Meanwhile, one of the three parishes that was allowed to opt out of the mandate because of low incidence levels of the virus decided to adhere to Edwards’ order. West Feliciana Parish President Kenny Havard said his parish will go along with the mandate.

Watch: 'If you don't like the mask mandate,' John Bel Edwards says, 'wear it anyway'

State leaders have been troubled by the growth in new cases that saw Louisiana surpass its previous high for new weekly cases since late-March. The month of April saw some of the deadliest weeks of the outbreak, but also a dramatic drop in hospital admissions and overall cases as the state flattened the curve of infections following a stay-at-home order.

“Look at the numbers for yourself and see the resurgence of this virus here in Louisiana and elsewhere,” Edwards said at a news conference Monday with FEMA Administrator Peter Gaynor.

Louisiana logged more than 13,000 new coronavirus cases this past week, shattering the previous weekly record of 11,047 cases set in the first week of April. The hotspot Acadiana region for the fifth day in a row led the state with the most daily cases and accounted for a quarter of the state’s hospitalizations in the past two weeks.

The Acadiana region on Monday led Louisiana’s nine administrative in new coronavirus cases for the fifth day in a row. The region also recorde…

The state is testing far more now than in April. But the share of tests coming back positive has risen from under 5% in the Phase 1 of reopening in May to nearly 10% over the past week. That means the rise in cases cannot be explained entirely by more tests being conducted.

And while young people are contracting the virus at a higher rate as of late, hospitalizations have marched steadily upwards. The number rose again Monday to more than 1,300, the highest point since May 11.

The spike in new cases, particularly in Baton Rouge, also drew concerns from the White House coronavirus task force, which tapped the Capital City to roll out at least 5,000 free tests each day.

The vice president plans to discuss the state’s response to the pandemic when he comes to Baton Rouge and meets with the governor on Tuesday, as well as holds a roundtable with higher education leaders at LSU to promote colleges resuming in the fall.

Vice President Mike Pence is scheduled to visit Baton Rouge next week to address Louisiana's fight against the coronavirus, according to a pre…

The governor has urged people to comply with the face mask rule and not force the state to write citations to businesses for violating it. According to his executive order, citations would be written only to businesses or organizations — excluding religious organizations — if they fail to require patrons and staff to wear face coverings.

That task of issuing citations falls largely on state Fire Marshal Butch Browning’s office. But local law enforcement would become involved if a person refused to wear a face covering and then refused to leave a business when asked, at which point the person could be cited for trespassing.

Though state agencies like the department of health and state fire marshal’s office lack the ability to require municipalities and parishes to fall in line with the mask order, they can enforce the governor’s order within businesses and public areas.

“If a business is either not providing a response, or outright saying they're not going to be doing this, that will come into our venue,” said Fire Marshal spokeswoman Ashley Rodrigue.

Browning’s office, along with Health Department and Office of Alcohol and Tobacco Control officials, visited nearly 4,000 businesses before the mask mandate went into effect, checking on things like social distancing and sanitation. The agencies only issued warnings, however, and did not dole out any citations.

Despite the uptick in new cases, the governor’s face-mask mandate was met with opposition from some local governments, some of whom say they won’t ask local law enforcement to crack down on the requirement.

Livingston Parish President Layton Ricks, a Republican, said Monday his parish won’t support “strict enforcement” of the governor’s order, but he acknowledged businesses and the public still have to follow the state mandate.

Municipalities that have added face covering requirements but haven’t issued citations essentially have taken a similar approach to Livingston Parish, Ricks said. “I’m in no way telling people to not wear a mask,” he said.

Livingston Parish will not penalize people people who don't wear a mask in public, local leaders said Monday, even though the parish's coronav…

The rate of infection in Ricks' parish is just more than 400 cases per 100,000 residents, or more than four times the rate needed to gain an exemption from the state order. A recent rise brought its total cases to more than 1,550 after recording 384 new infections in the past week.

The Ouachita Parish Sheriff’s Office, in northeast Louisiana, also said it would not enforce the mandate at the local level, according to the Ouachita Citizen, though the bulk of enforcement falls on the fire marshal.

Edwards said people need to “do what’s right,” which is wearing a mask, which he called a “very minor adjustment” to avoid going back into Phase 1 of reopening or even another stay-at-home order.

“We need that from leaders at all levels,” Edwards said. “We need it from business leaders, faith leaders, political leaders. And obviously there is a mandate now because quite frankly we weren’t getting the compliance we needed before.”

Only three parishes — West Feliciana, Grant and Red River — were given the ability to opt out of the governor's order because their caseloads fell under a threshold of fewer than 100 cases per 100,000 people over two weeks. That list of parishes will be updated every two weeks.

Havard, the Republican president of West Feliciana Parish and longtime friend of Gov. Edwards, said the parish will follow the state’s guidelines, noting it’s largely up to the state fire marshal to enforce it. He added that transfers of infected parish prisoners to Angola, which is in his district, has masked the low number of cases in the community.

“We’re going to let the state fire marshal enforce whatever they’d like to enforce,” Havard said, adding he has met with business owners and that most people in his parish wear masks in businesses anyway.

The mayor of Baker also said its police force won’t enforce the governor’s mask mandate, while also stressing that people should wear face coverings while around others, among other precautions. Baker, along with other Baton Rouge suburbs, declined to enforce a similar mask order Mayor-President Sharon Weston Broome issued earlier this month.

Baton Rouge has taken a light-touch approach to carry out its face-covering mandate after joining New Orleans and Jefferson Parish, which have mainly issued warnings to businesses and those not following local rules.

Public health officials and the governor's office have stressed the importance of wearing face coverings, especially in indoor areas where keeping a 6-foot distance from others is difficult.

The U.S. Centers for Disease Control says wearing a face covering reduces the chances of spreading respiratory droplets carrying the virus that can spread to others from coughing, talking or even breathing. The precaution is especially important, they say, because people can infect others without showing symptoms of the coronavirus-born illness, COVID-19.

While Louisiana's top school board meets Tuesday to approve emergency health safety rules for the reopening of public schools, the panel is ex…