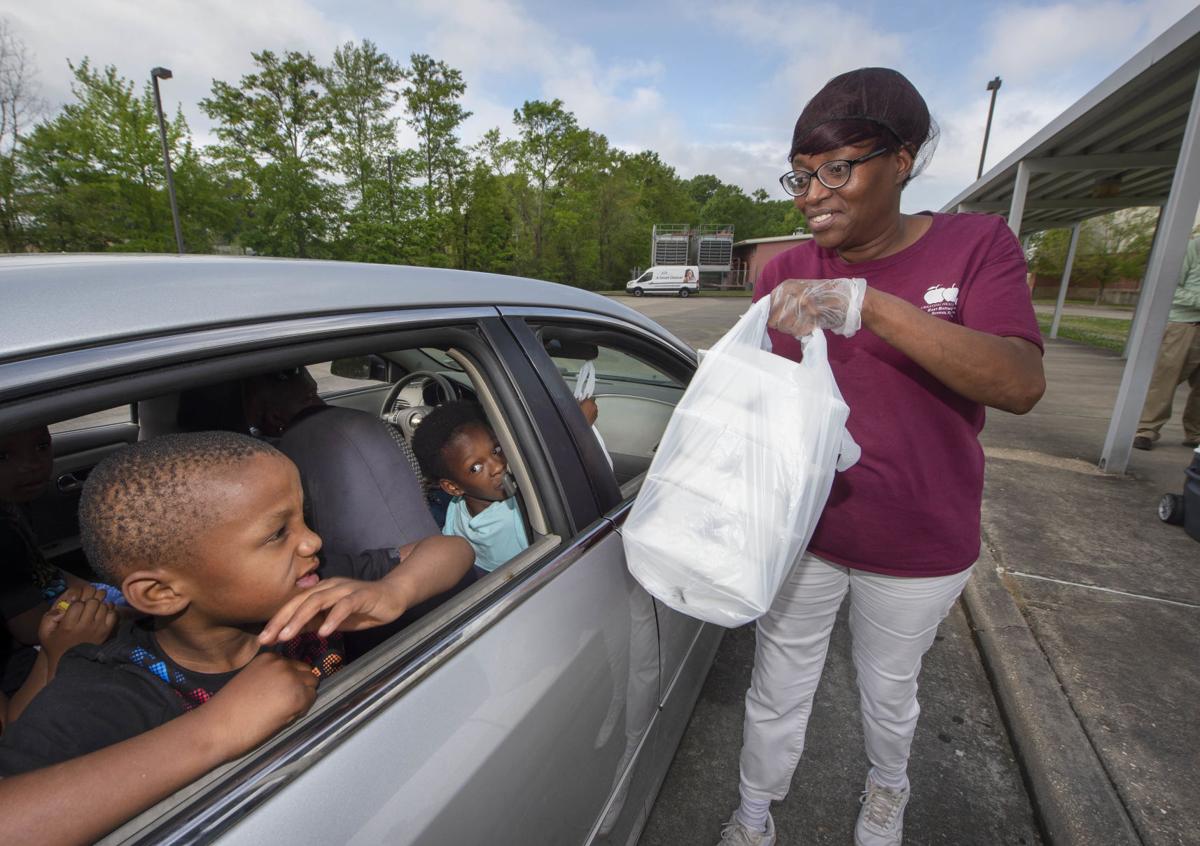 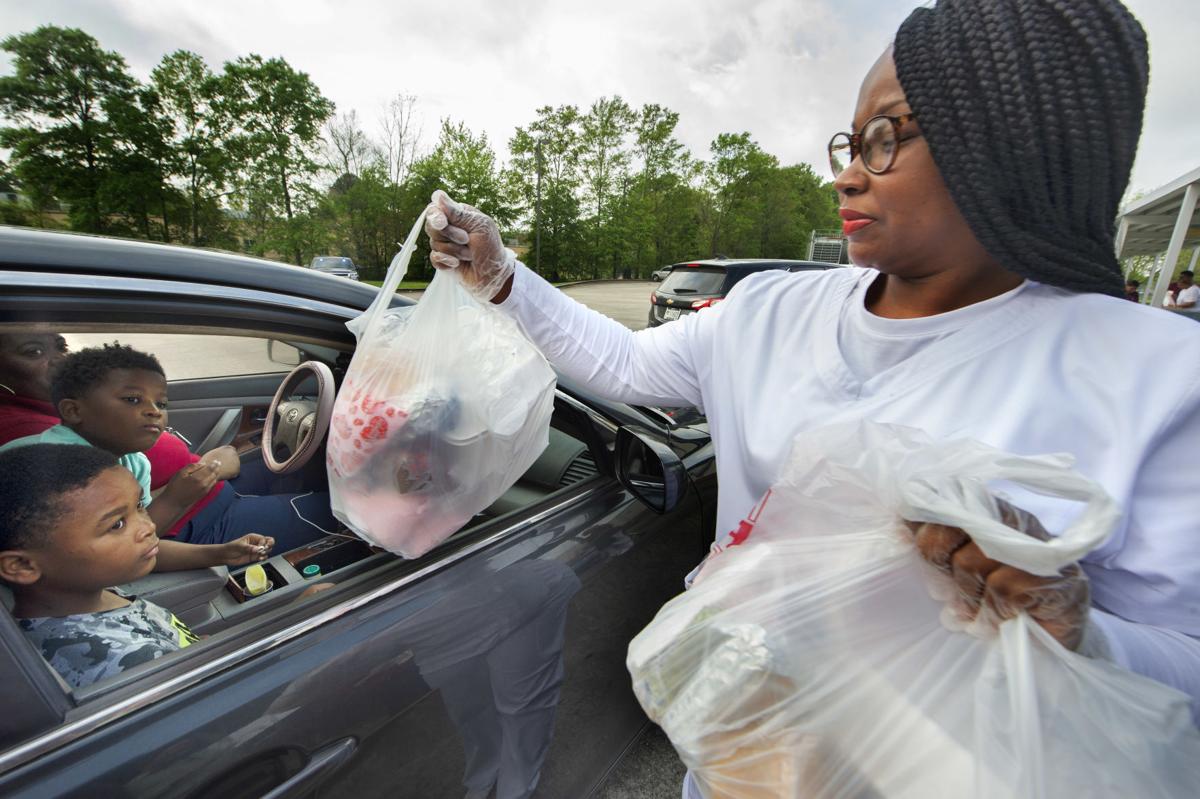 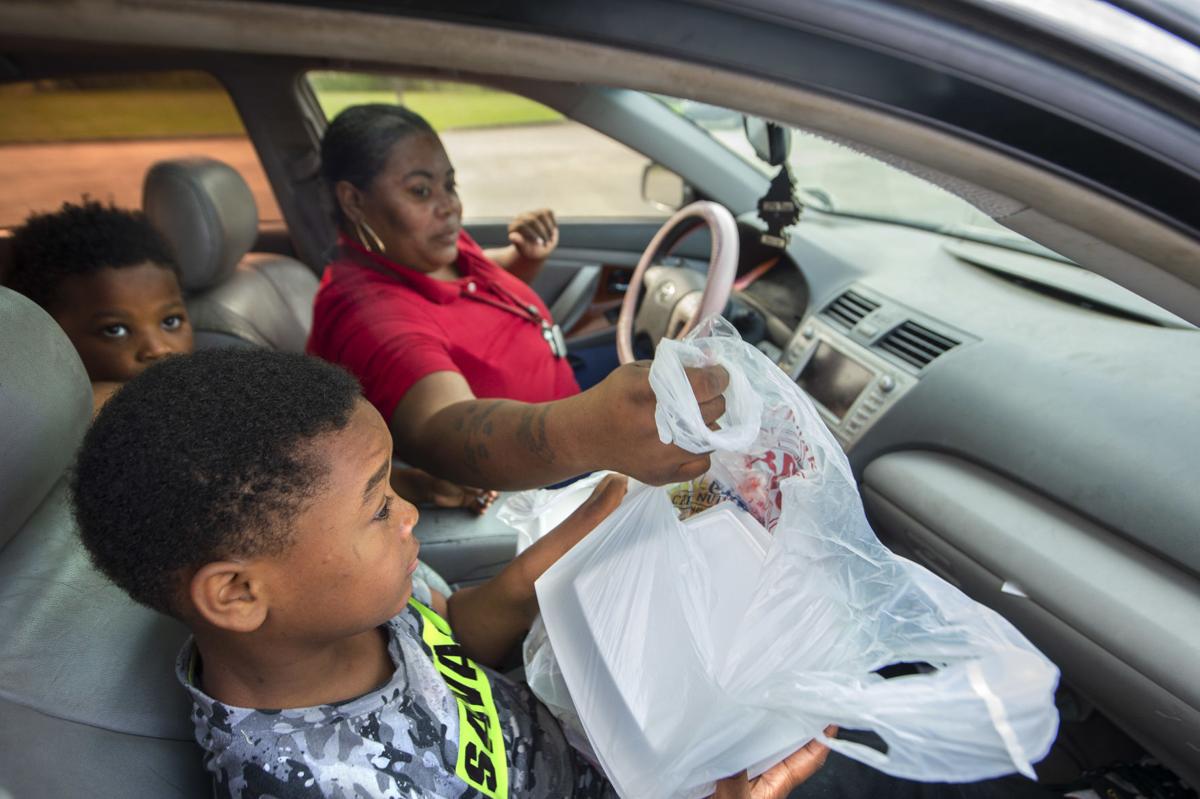 Lunches and breakfast are handed to, front to back, Karvin Floyd, 11, Kameron Floyd, 9, and their mom Kedra Floyd, at an East Baton Rouge Parish Schools drive-through Grab-N-Go School Meal site at Capitol Middle School, Wednesday, March 18, 2020, prompted by the school closures because of the novel coronavirus threat. 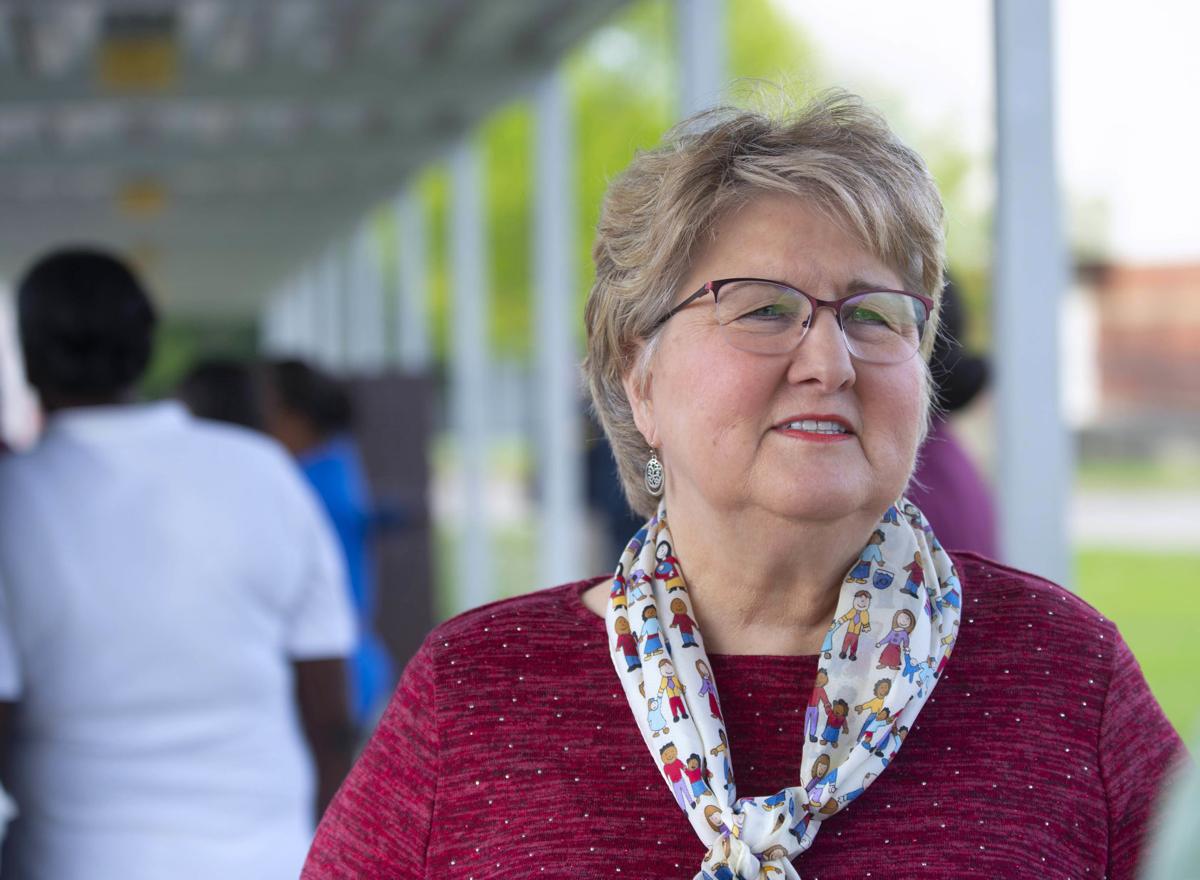 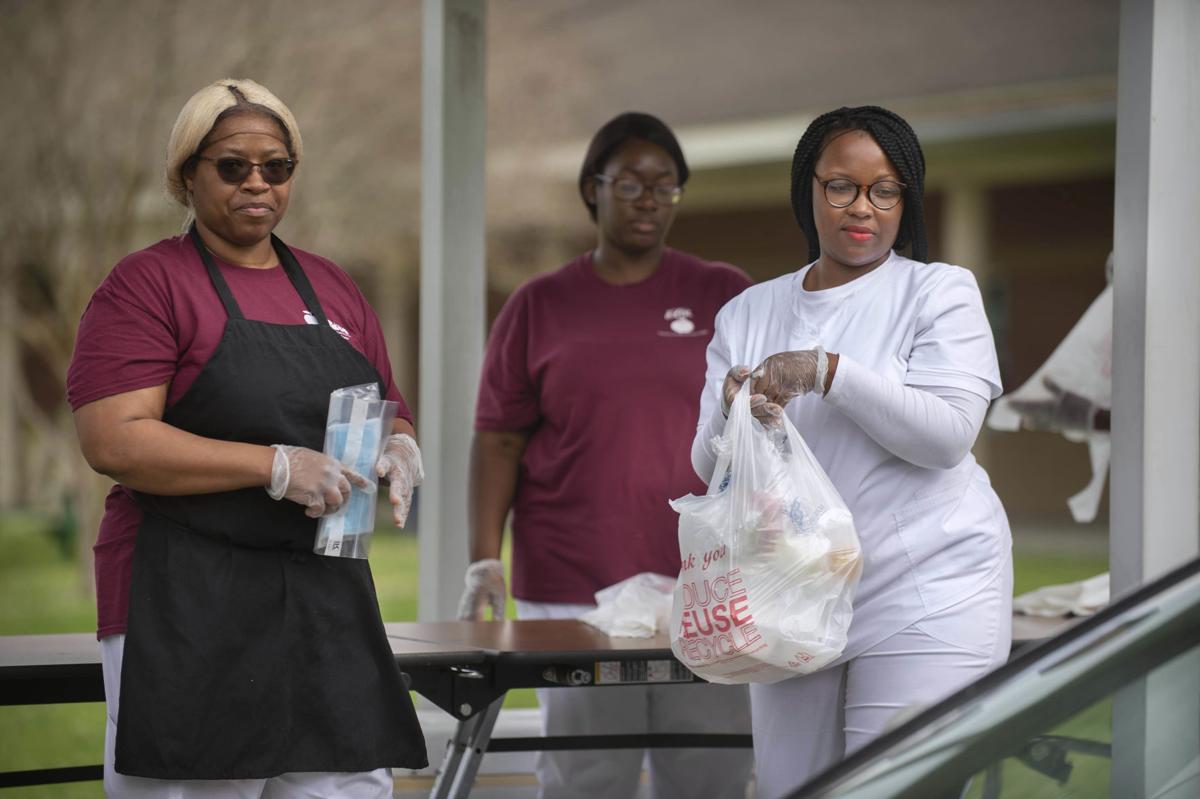 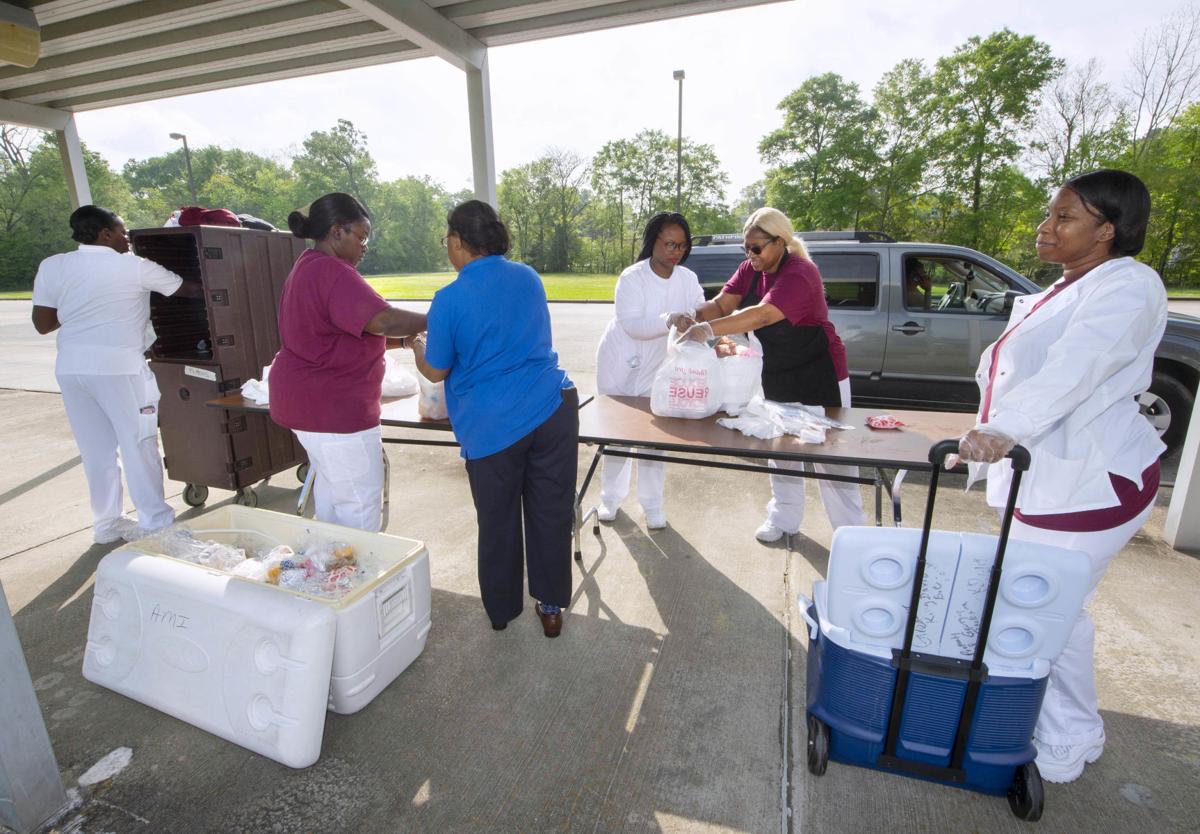 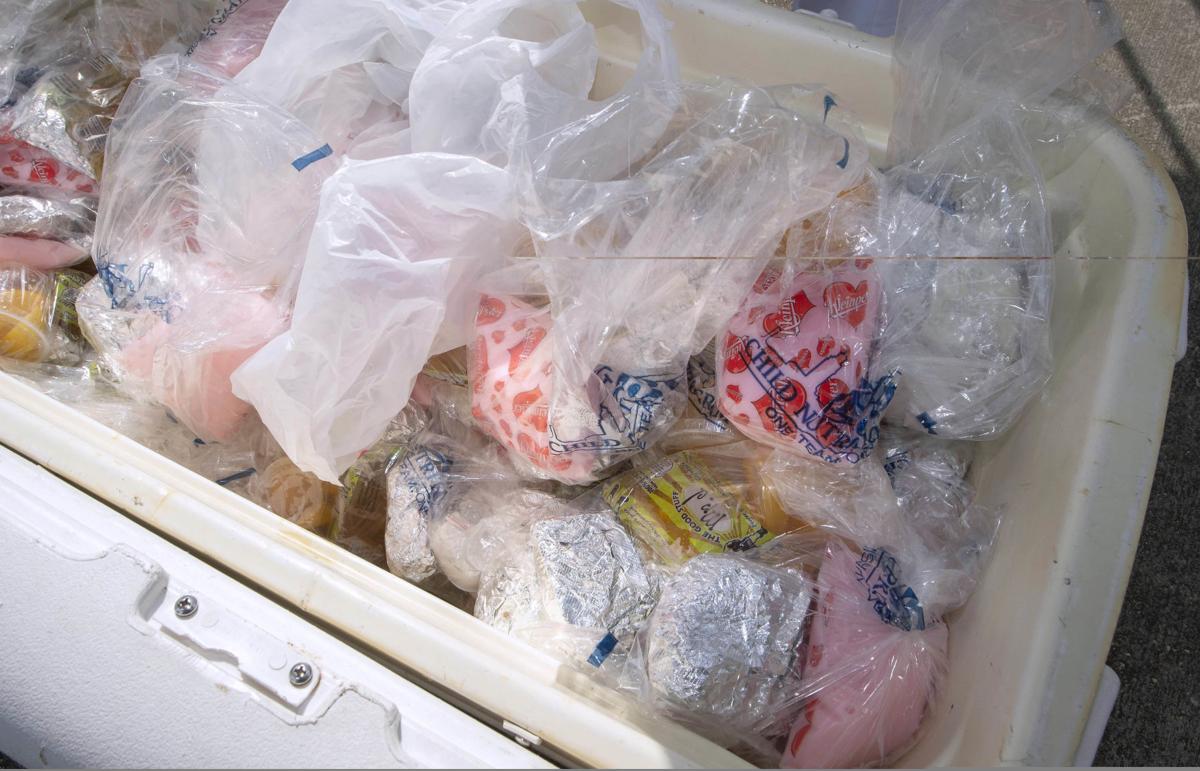 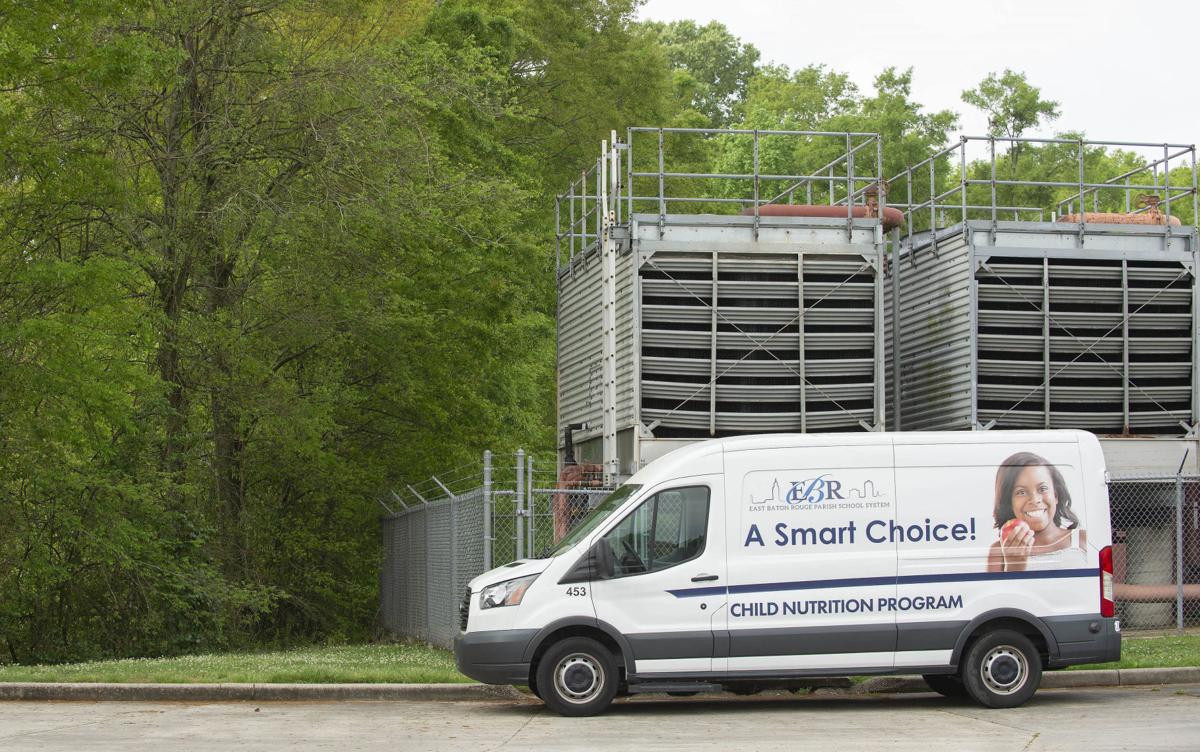 Lunches and breakfast are handed to, front to back, Karvin Floyd, 11, Kameron Floyd, 9, and their mom Kedra Floyd, at an East Baton Rouge Parish Schools drive-through Grab-N-Go School Meal site at Capitol Middle School, Wednesday, March 18, 2020, prompted by the school closures because of the novel coronavirus threat.

While cafeterias are closed at schools throughout East Baton Rouge Parish, many school kitchens have reopened and are striving to feed thousands of needy families marooned in their homes because of the coronavirus outbreak.

Kedra Floyd joined a small line of cars Wednesday morning in the rear of Capitol Middle School, waiting to pick up breakfast and lunch. This trip will be part of her daily routine until schools reopen.

Like many parents, Floyd was surprised last week by the order to close schools throughout Louisiana until April 13. Now she's at her Eden Park home with seven children and she’s been having trouble feeding them all.

“It’s getting tough,” she acknowledged.

So she was happy to learn that nearby Capitol Middle would be a feeding site. The middle school is one of seven feeding sites set up by the East Baton Rouge Parish school system and one of dozens in the Capital region. More sites are opening in the days to come.

Floyd ended up taking with her several plastic bags filled with breakfasts — French toast sticks and fruit — as well as lunch — hamburger, fruit cocktail, baked beans — plus milk and apple juice to wash it all down.

It’s what students at Capitol Middle would normally have received if they’d had school.

Floyd brought two children with her in the car Wednesday.

She noted two of her other children were busy at home with schoolwork.

“They’ve got online classes they’ve got to take at the school they go to, so they’re home doing that,” Floyd explained.

Why feeding schoolchildren homebound due to coronavirus is so important

Nadine Mann, director of the Child Nutrition Department, explains why it was so important to her to once again feed meals to children who were…

Traffic was light early in the day, but each car left with a lot of meals.

“Each one has seven, six, five, four … four was the least,” said Nadine Mann, director of child nutrition for the East Baton Rouge Parish school system, as she watched the first cars come and go.

Mann said school meals are central to the well-being of many children in Baton Rouge.

“At least 80% of our kids are in poverty and we know without this meal, without school lunch or breakfast, they may not have a meal at home,” Mann said. “We just don’t know. So we’re trying to fill that gap.”

Venecia Brown collected seven plastic bags full of meals Wednesday — one for her daughter in the back seat and six more for other, waiting children. She said the last few days have been hectic.

“It’s been a bunch of organized chaos,” Brown said. “It’s a learning experience for everybody. It’s the unknown.”

She said she’s been able to feed her children for the past few days — “bread and all kinds of sandwiches" — though it’s been hit or miss finding food at the grocery store. Nevertheless, she was happy when she noticed on social media that Capitol Middle would be coming to the rescue.

“I’m just blessed that they have this option to come and get the kids a meal,” Brown said.

While the meals she received aren’t necessarily her kids’ favorite, it doesn’t matter.

Similar to summer feeding programs, the school meals being served now are available to all children 18 years old and younger, regardless of their income and where they live. Capitol Middle is one of the schools in Baton Rouge that stays open in the summer to feed children.

In the summer, though, children get to eat inside in the cafeteria. And there’s another difference.

Felecia Barnes, an area supervisor with the parish school system’s Child Nutrition Department, said, thanks to a federal waiver, schools can hand out food based on the parent’s word about how many children they have. In the summer, the rules are more strict.

“We’ve got to put eyes on them in the summertime,” Barnes said.

Afterward, Mann said she was pleased with how Wednesday went. All the meals prepared were handed out, she said, though in some cases she had employees bring them home to families they knew needed meals. She expects demand to grow as word gets around.

“Some of the managers that do summer feeding, they know it takes a couple of days to pick up,” she said.

On Monday, she’s planning to open new feeding sites at Glen Oaks High and Scotlandville Middle. She also has two vans and may deliver meals to churches and community groups.

She worries, though, about food supplies in the future, especially for staples such as milk and bread. And styrofoam clamshells are in short supply, so short that the school system is accepting donations via it’s charitable Foundation for East Baton Rouge School System.

“We’re vying for the same plates that the restaurants are all now using,” Mann said.

Coronavirus cases in Louisiana jump to 280, with 703 tests completed; death toll at 7

The number of coronavirus cases in Louisiana has jumped to 280 in a matter of hours, impacting 13 parishes, according to new health department…