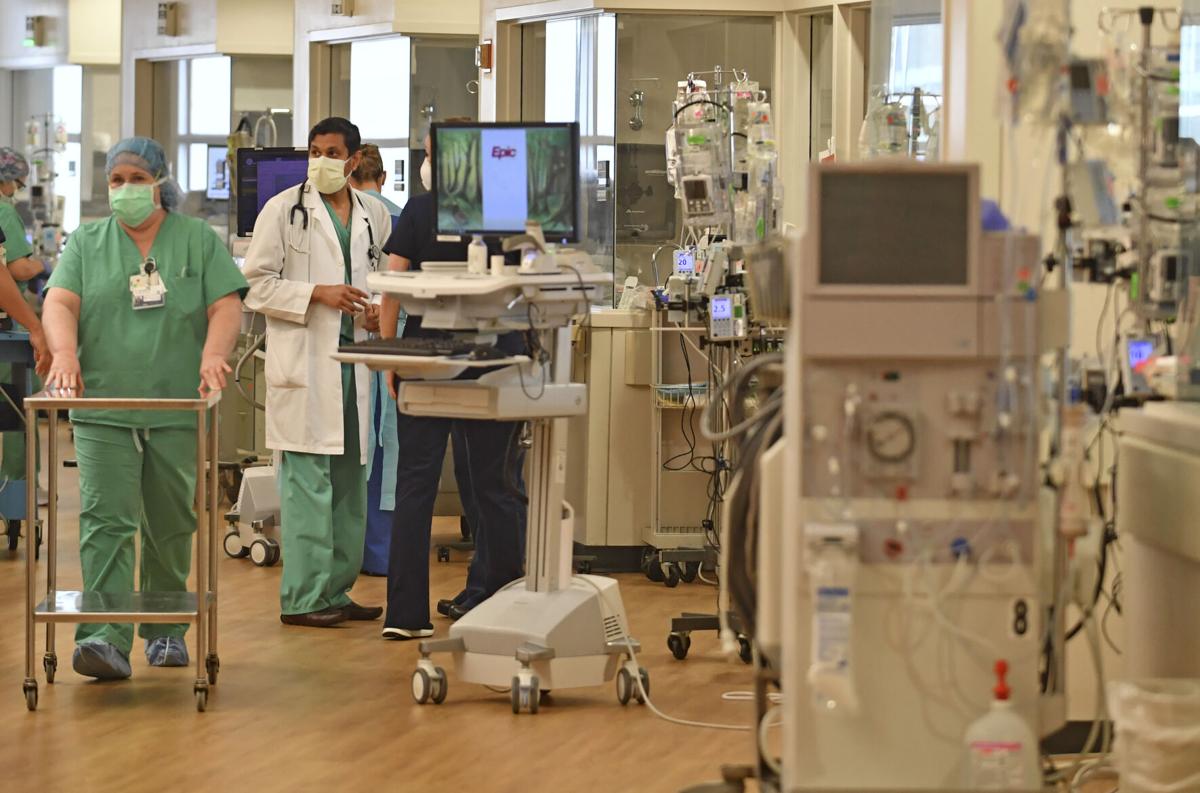 Staff inside one of the covid units at North Oaks Hospital monitor patients, Wednesday, August 4, 2021, in Hammond, La. 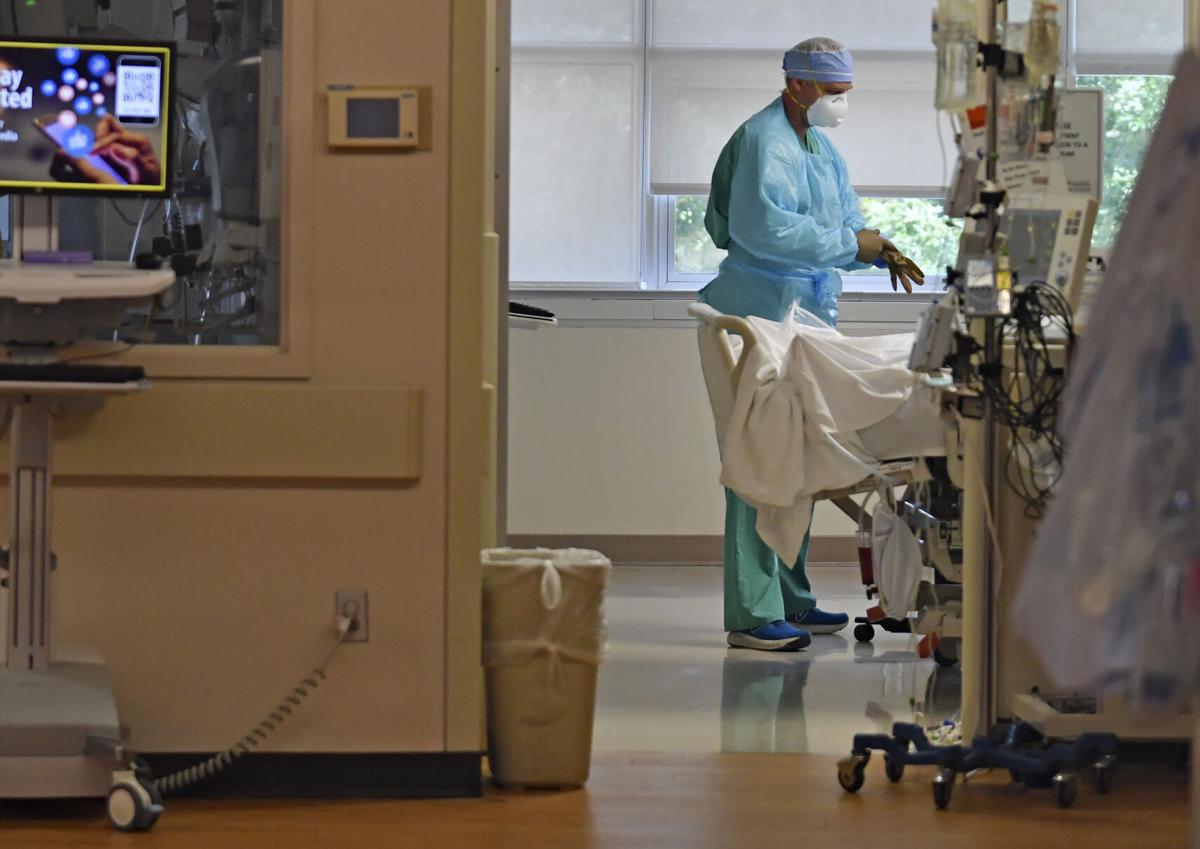 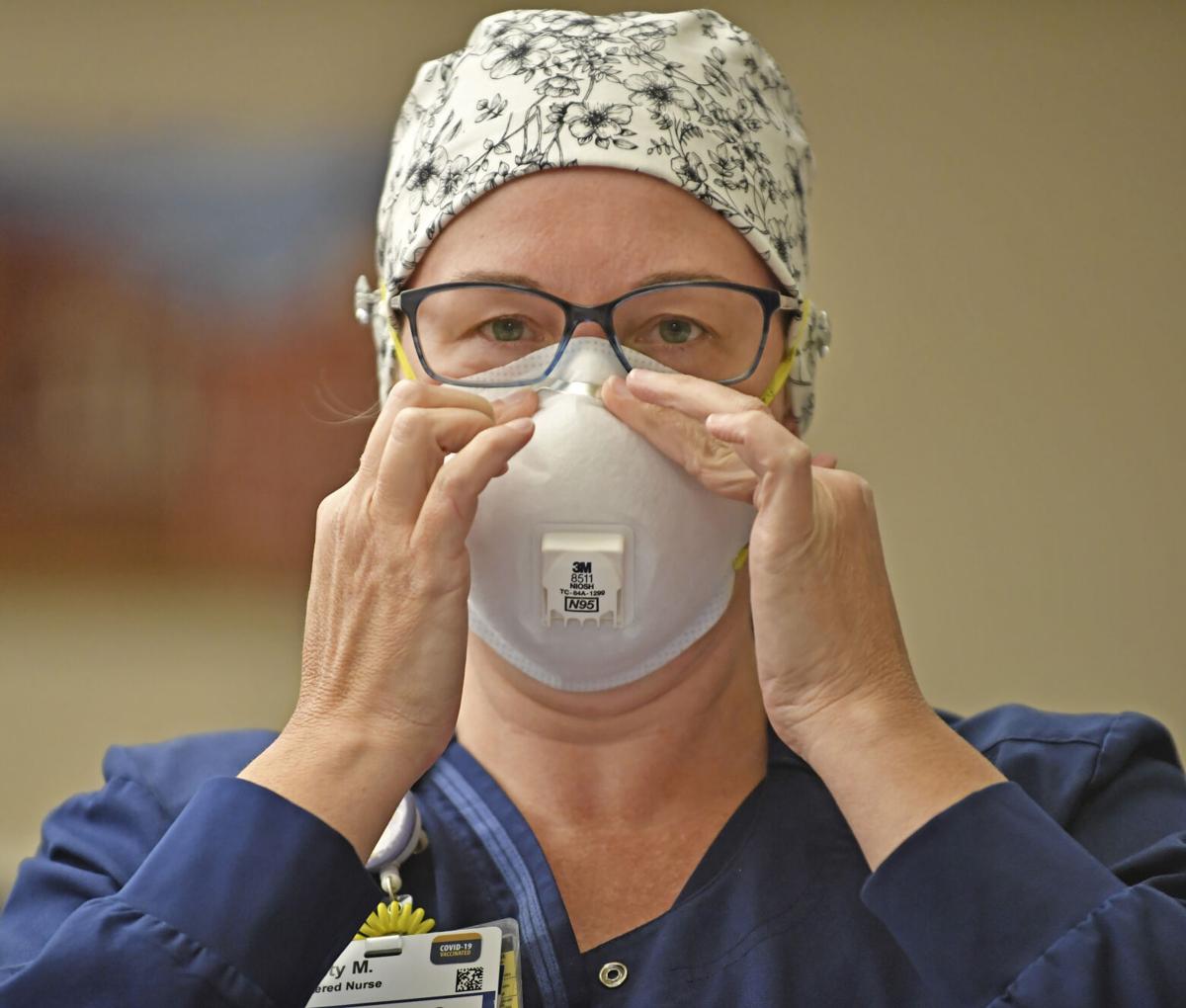 Charge nurse Christy Michel ensures a tight fit of her N95 masks before checking on a patient inside one of the covid units at North Oaks Hospital, Wednesday, August 4, 2021, in Hammond, La. 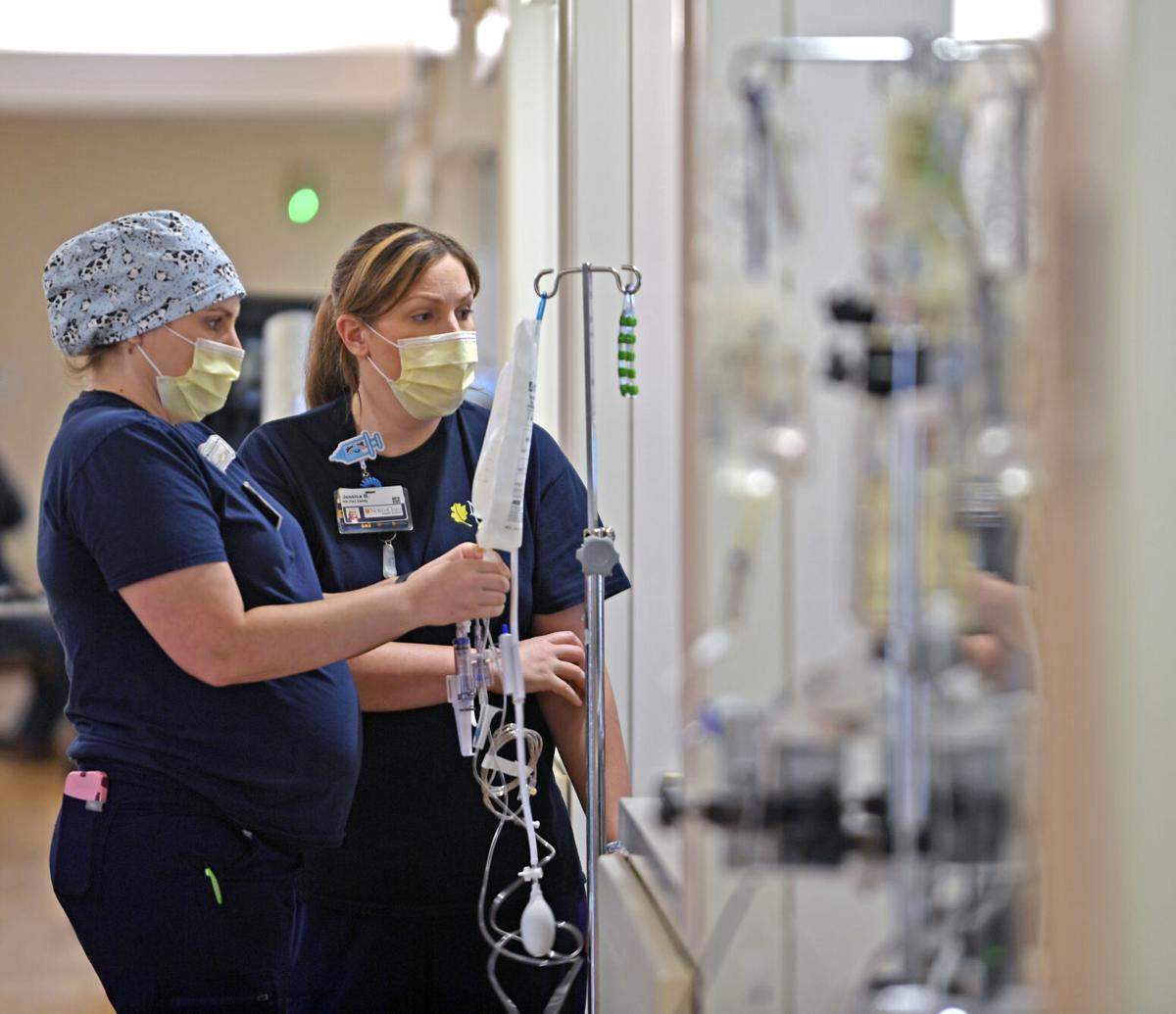 Staff inside one of the covid units at North Oaks Hospital check a patient's IV, Wednesday, August 4, 2021, in Hammond, La. 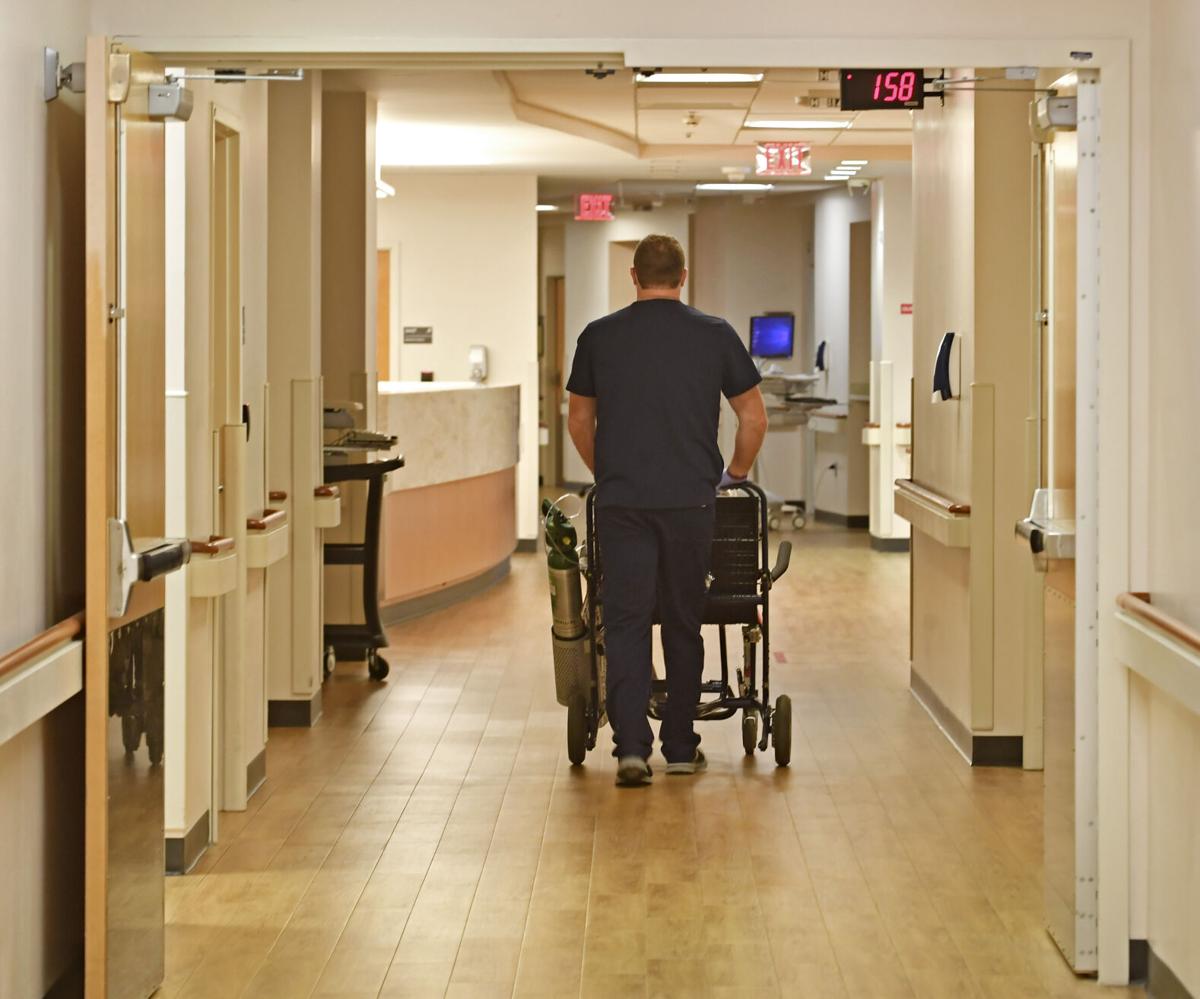 A staff member wheels a patient back to their room inside one of the covid units at North Oaks Hospital, Wednesday, August 4, 2021, in Hammond, La. 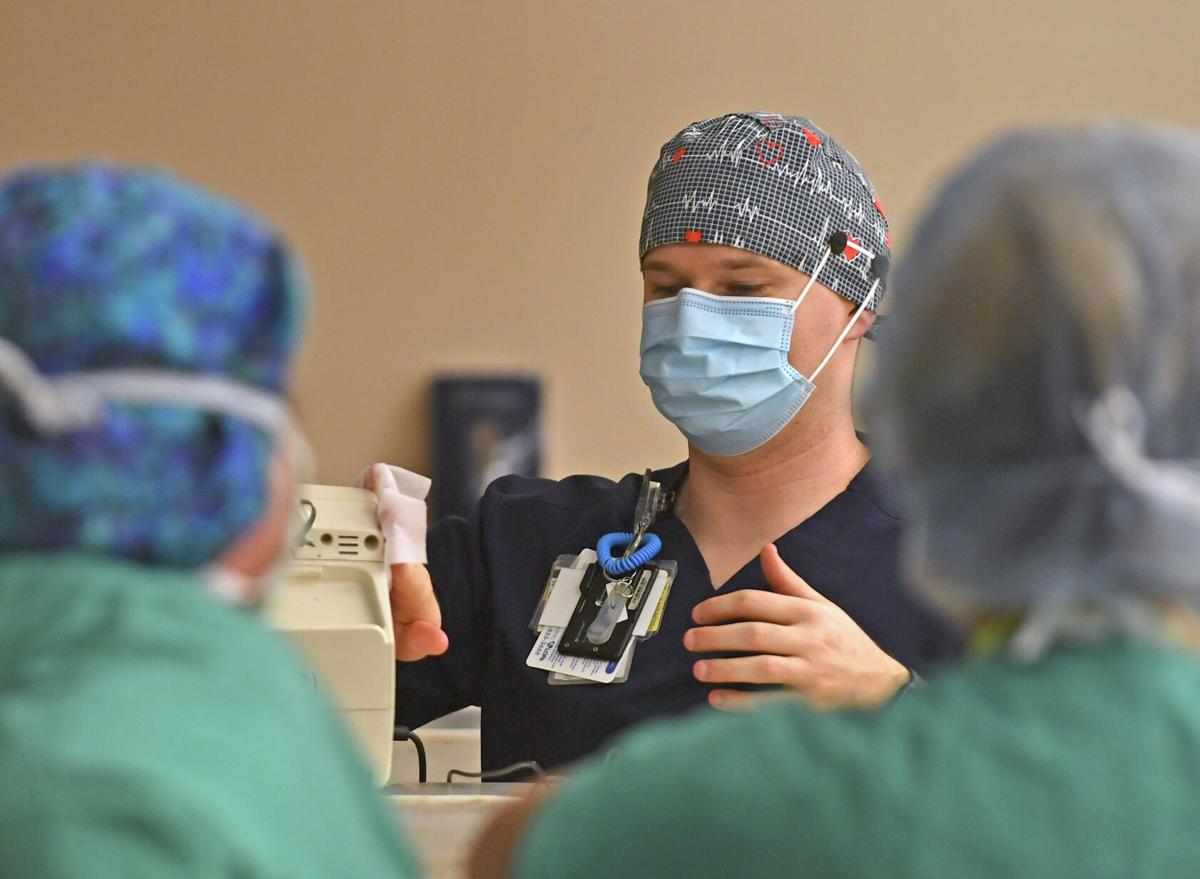 Nurse Cody Effler sanitizes equipment at the nurses station inside one of the covid units at North Oaks Hospital, Wednesday, August 4, 2021, in Hammond, La. 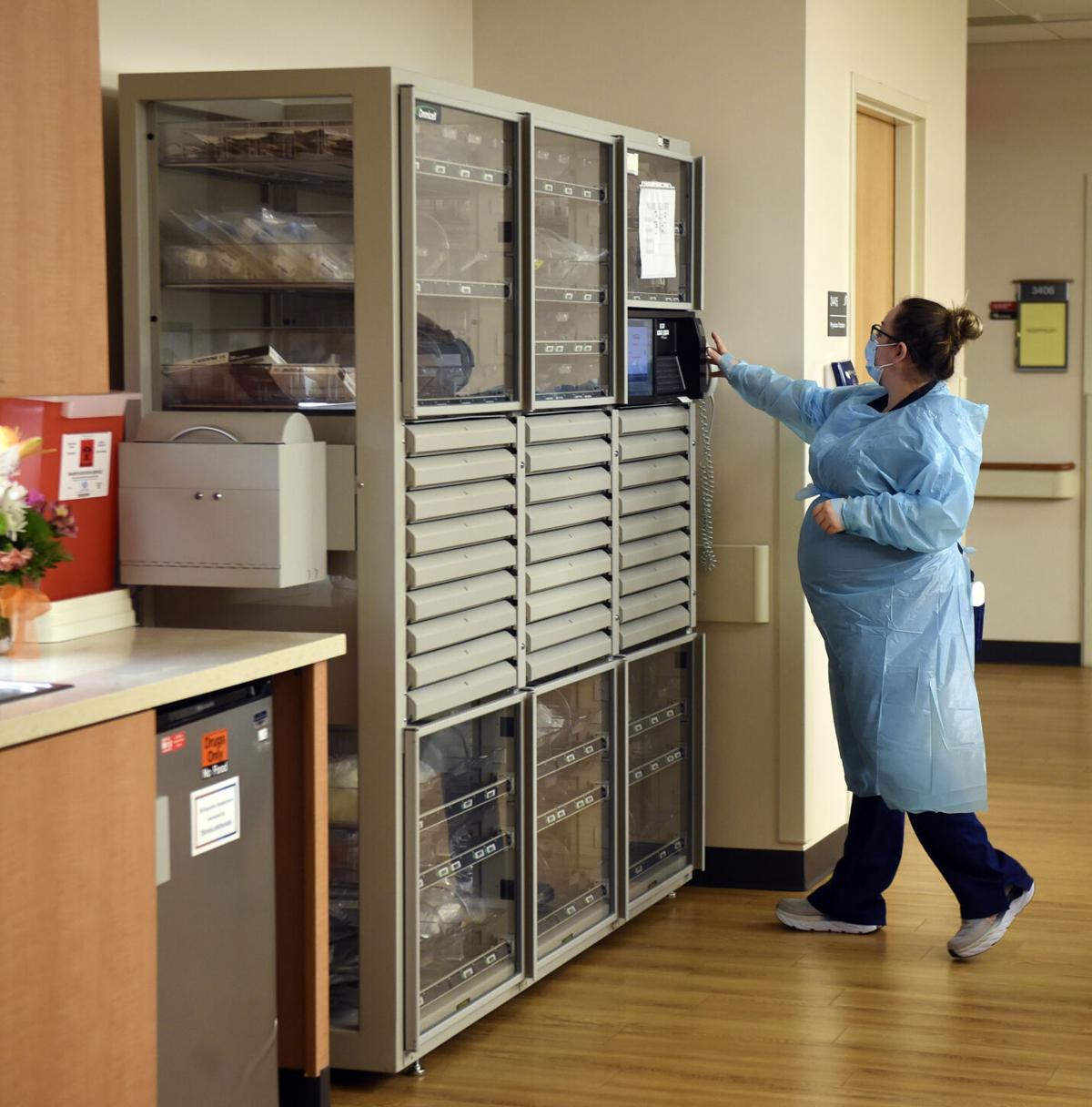 Nurse Jessica Anthony retrieves supplies before checking on a patient inside one of the covid units at North Oaks Hospital, Wednesday, August 4, 2021, in Hammond, La. 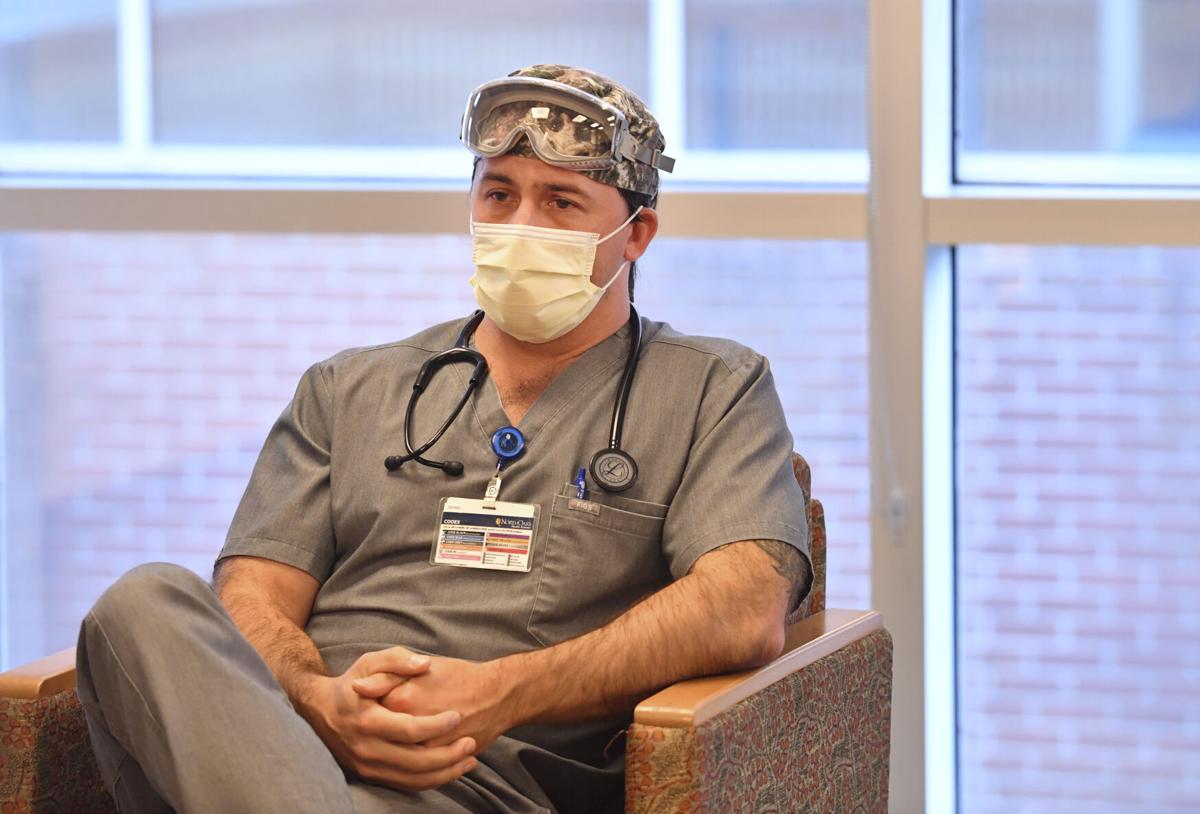 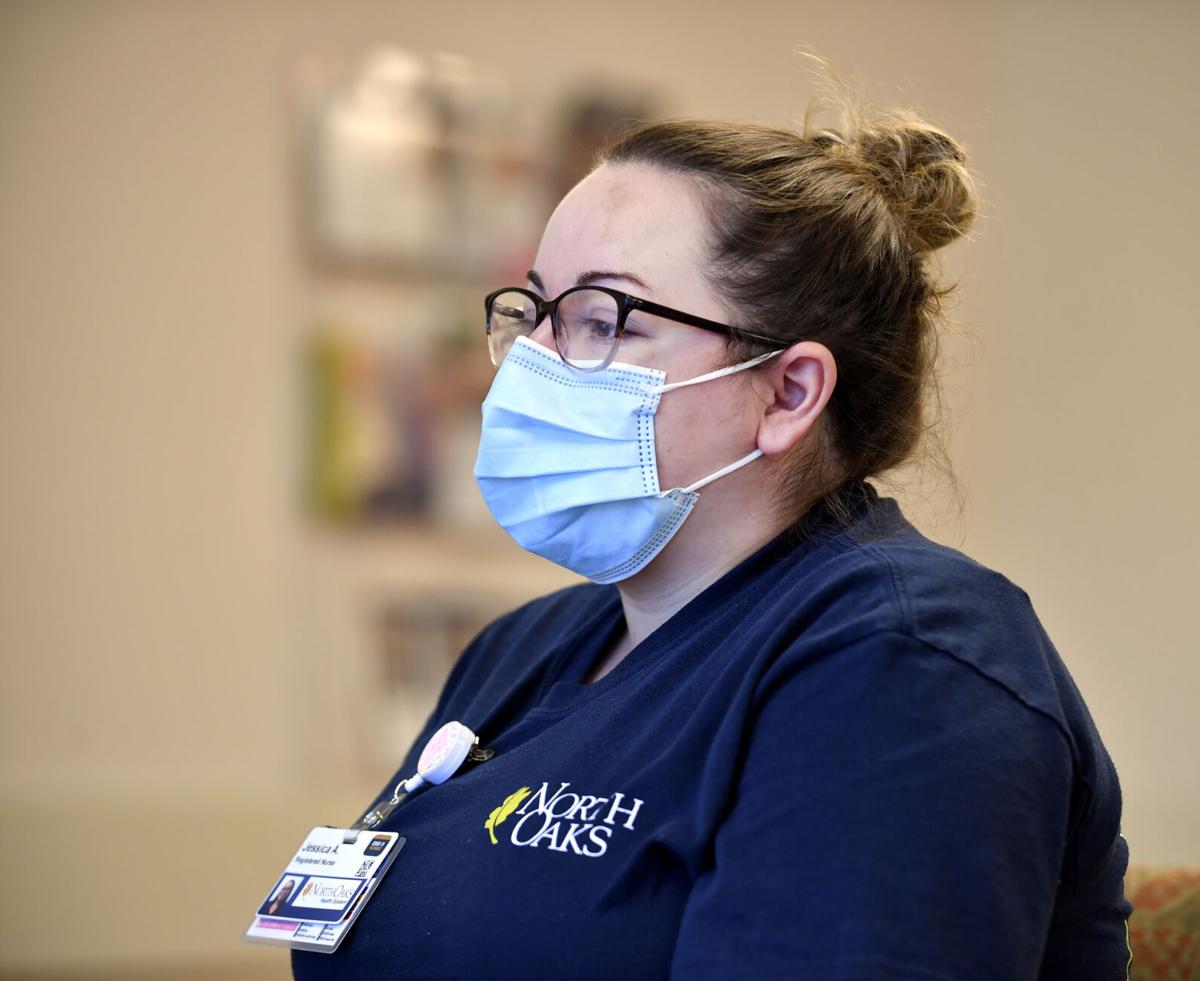 Nurse Jessica Anthony shares her experiences on the front line of the coronavirus pandemic at North Oaks Hospital, Wednesday, August 4, 2021, in Hammond, La. 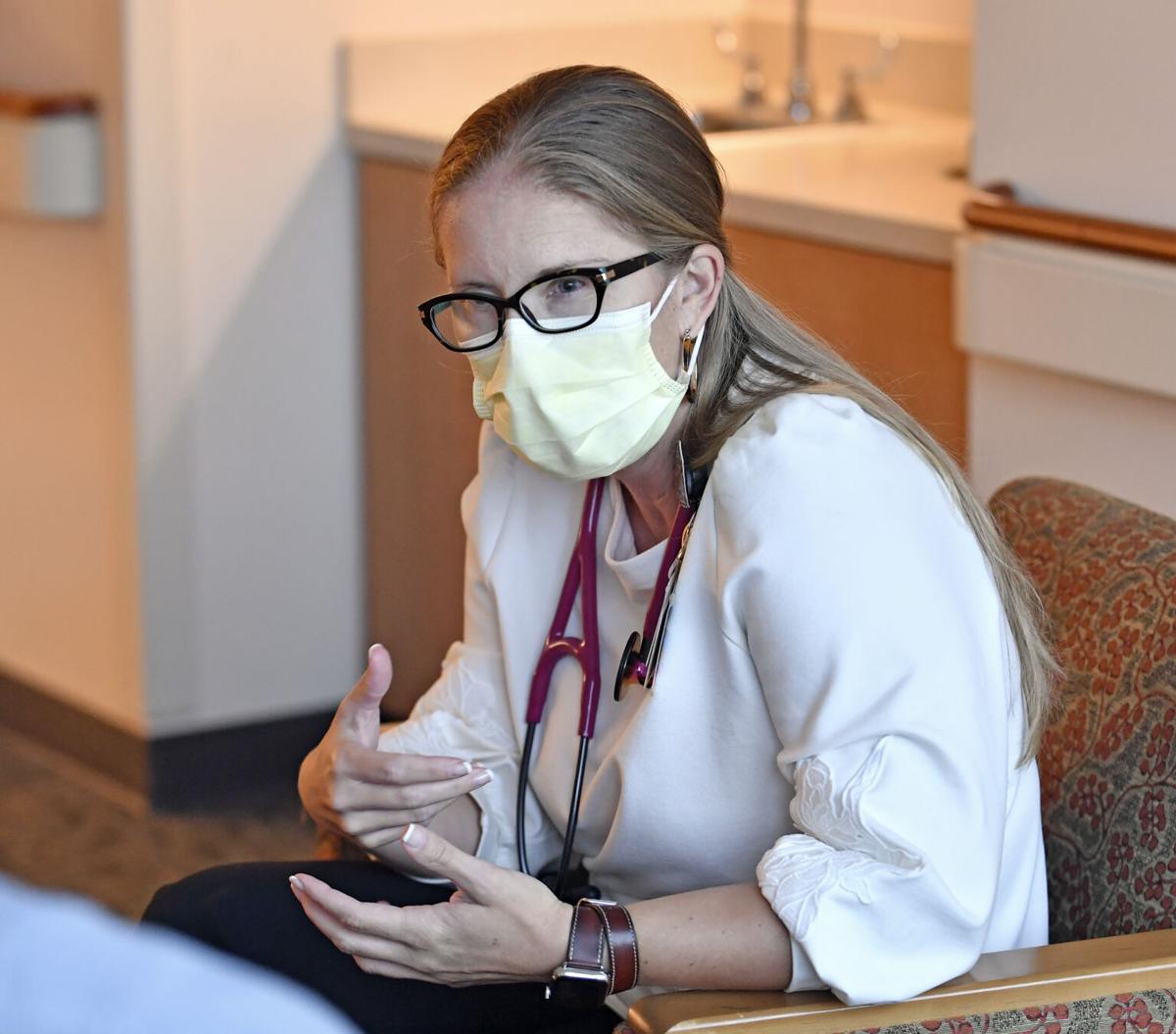 Infectious disease physician Dr. Stacy Newman speaks on the highs and lows of her staff's fight against coronavirus inside one of the covid units at North Oaks Hospital, Wednesday, August 4, 2021, in Hammond, La.

HAMMOND — Kim Schehr didn’t believe she was at much risk of getting sick with COVID-19 when she left for a family vacation to Florida in July.

If she caught it, she thought the virus would give her a cold, or at worst, a fever and chills like those that accompany the common flu. So the Hammond resident chose not to get vaccinated against the virus, thinking it just wasn’t necessary.

Speaking between gasps for air supplemented by a breathing tube, Schehr said Wednesday she regrets that decision after spending five days hospitalized with debilitating pneumonia. Every moment, she struggles to breathe — complications from the virus, for which she tested positive a little more than a week ago.

“My personal decision was to not get the vaccine because I’ve been fine for the past year-and-a-half,” Schehr said. “I don’t think I would have progressed this bad if I’d had it.”

When University Medical Center in New Orleans was inundated with COVID patients during the first three surges, a unoccupied unit typically use…

The 52-year-old, who described having few health scares in the past, is one of 109 people hospitalized with COVID-19 at Hammond’s North Oaks Health Center.

It’s by far the most COVID patients the 330-bed hospital has housed since the pandemic entered Louisiana in March of 2020 — a steep rise from the earlier peak of around 50 patients in last winter’s surge, said Dr. Stacy R. Newman, North Oaks’ infectious disease physician.

North Oaks is one of hundreds of hospitals across Louisiana packed to the brink with COVID-19 patients as the more-virulent delta variant rips through the state’s population, which has one of the nation’s lowest rates of vaccination against the virus at 37.2%. The state set a new peak for COVID-19 hospitalizations on Wednesday with 2,247 patients, the Louisiana Department of Health said. The vast majority of those patients are unvaccinated.

The crushing wave of cases is overwhelming understaffed hospitals, testing doctors’ ability to provide quality care and straining hospital workers’ mental health to the brink as they battle yet another surge of the deadly virus. This time, medical experts agree the wave was preventable due to the availability of vaccines.

Vaccinations in Louisiana rose by almost 300% in recent days, White House data show, due in part to fears over the variant. But at hospitals like North Oaks — the largest hospital in Tangipahoa Parish, which the New York Times ranks as the second-worst county in the nation for COVID-19 spread — the virus is winning the race to get shots in arms.

As Louisiana faces its worst surge of the coronavirus since the pandemic’s beginning, leaders from the sprawling Franciscan Missionaries of Ou…

Delta’s virulence appears to be making patients like Schehr arrive sicker and deteriorate much more quickly than in past waves, said Dr. Justin Fowlkes, North Oaks’ chief pulmonologist. Many patients are showing up at the emergency room and being sent straight to the ICU for intubation — the most dire level of care, where patients are anesthetized and lie motionless, their breathing automated by a machine ventilator.

In this wave, those patients’ chances of survival seem to be coming down to a coin toss, Fowlkes said.

“It feels like we’re not as successful in supporting people now as we were in earlier waves,” Fowlkes said Wednesday, on a break from a shift in the ICU. “We had people who did well in the past. Maybe they were intubated for a while and needed six months in the hospital, but they made it home. We haven’t had many wins this time.”

Every bed in North Oaks’ ICU was filled by an intubated COVID-19 patient Wednesday. A day earlier, an alternate ICU the hospital set up in another wing filled up, too.

That means patients in units that provide less-critical care — like the one where Schehr is housed — might have to wait several days longer for an ICU transfer than they otherwise would need to in the event their conditions deteriorate.

Fowlkes can “count on one hand” the number of ventilated patients at North Oaks who have survived their bout with the virus in this wave. Of the 109 COVID patients currently hospitalized there, he estimated about 30 are on ventilators.

As vaccine hesitancy still keeps many Louisianans from seeking out shots, Fowlkes is engaging in the same exercise as many other doctors across the country. He talks to people about the vaccines' efficacy one-on-one, imploring them to believe what medical experts widely agree upon: that the shots are the only surefire way to prevent yet another surge.

Complicating hospitals' response to the surge, however, is the fact that their workers have not been immune to misinformation plaguing the vaccine rollout. In North Oaks’ case, just 43% of the hospital's existing staff has received the jab, said Melanie Zaffuto, a hospital spokesperson.

“I’m sitting here talking about the general public, but the percentage of hospital workers who are vaccinated is not impressive at all,” said Fowlkes. “It’s confusing to me why we don’t have upwards of 80% vaccination in our hospital.”

And like most Louisiana hospitals, North Oaks is also battling the delta variant with fewer staff than in previous waves.

Fifty-seven of the hospital’s 2,000 employees were out with COVID Wednesday, Zaffuto said, plus another 40 off for other reasons. Meanwhile, the hospital is trying to fill 400 vacancies — all while opening more surge units to care for the crush of COVID patients.

Cash-for-shots clinic lures vaccine-wary Louisianans: 'The money made it a little happier'

HAMMOND — The promise of a crisp $50 bill was nice.

While employees' decision to get the vaccine is theirs to make, North Oaks provides resources explaining medical experts' belief that vaccines are the most effective method to slow the virus’s spread, Zaffuto said. Hospital workers are trying desperately to convince their own colleagues of that reality. After long shifts in the ICU, he often volunteers time for one-on-one conversations with reluctant colleagues about the shots’ efficacy, Fowlkes said.

Poor patient outcomes, low staffing numbers and a deep sense of disappointment stemming from the surge’s preventability are taking a toll on hospital workers’ mental health.

“We have people coming in much younger, sicker, waiting longer in the ER, deteriorating faster,” said Jessica Anthony, a 27-year-old nurse in the hospital’s surgery unit. “Young people with no health issues are dying. It’s so frustrating, because we all agree this was fairly preventable. We rely on each other (at the hospital), because people at home and those who aren’t in the medical field don’t understand what it’s like to go through this.”

Many of the hospital’s workers are involved in the community in Hammond, through volunteering, work or as neighbors. Often, they know people who walk through the hospital doors personally.

“It’s a small community here. It’s deeply personal for us,” said Newman, the infectious disease physician. “That’s why a lot of us are still passionate about being here. As hard as it is some days, we know who we’re showing up for.”

Louisiana's mask mandate starts today. Here's what to know and who has to wear it.

The mandate will be in place at least until Sept. 1.

When they got back from Florida, Schehr’s husband was hospitalized with COVID-19, too. But he was discharged on Sunday. She is “a little worse along,” than he was, Schehr said.

She implored people on the fence to commit to getting the vaccine.

“I don’t think I would be this bad if I’d have taken the shot,” she said. “I was one of those ‘how did it come out so fast’ people. It was only after talking with the doctors at the hospital that I changed my mind.”

Clarification: This file has been updated to show that only existing North Oaks staff are included in the hospital's 43% vaccination rate.

Take a look inside North Oaks Hospital, Wednesday, August 4, 2021, as staff work around the clock tending to 109 Coronavirus patients, the mos…