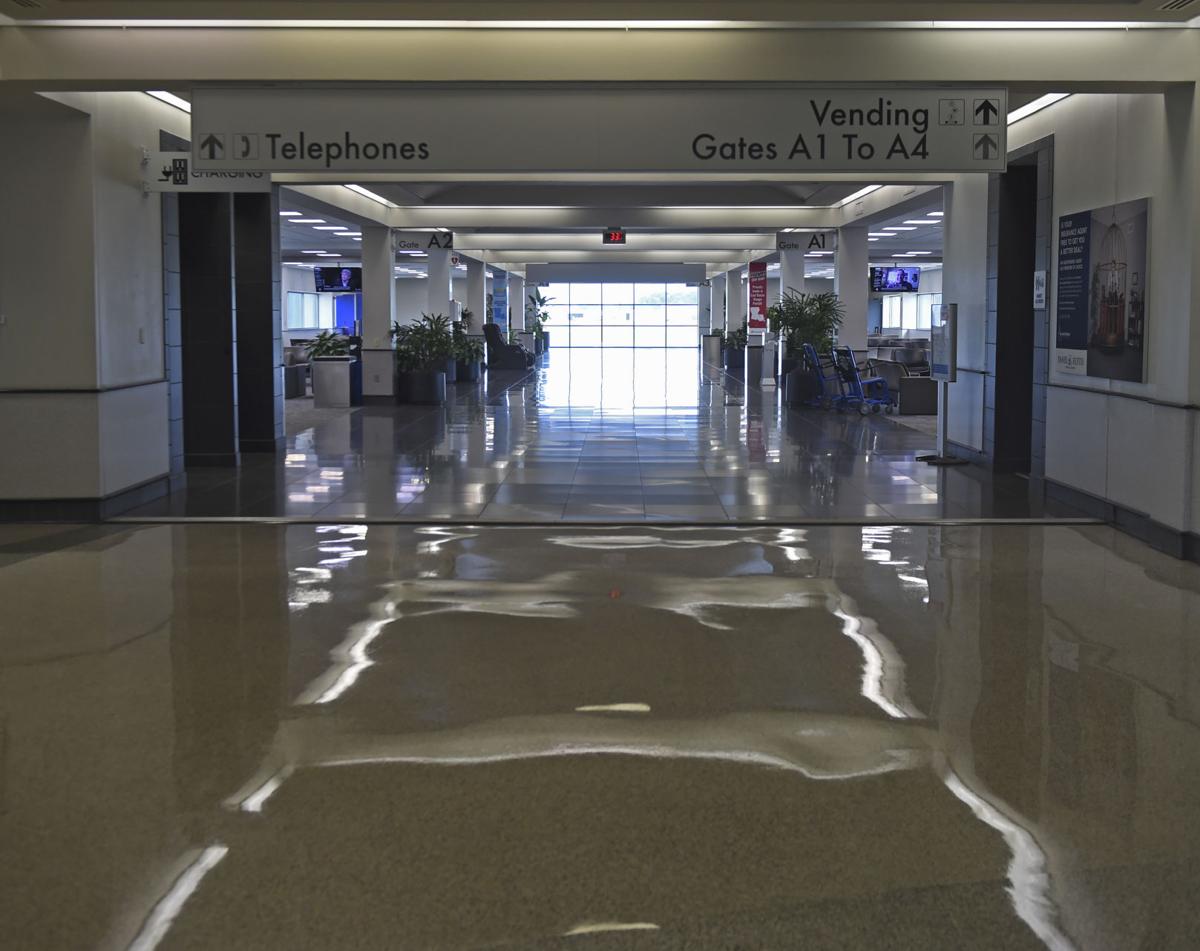 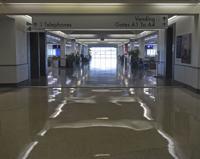 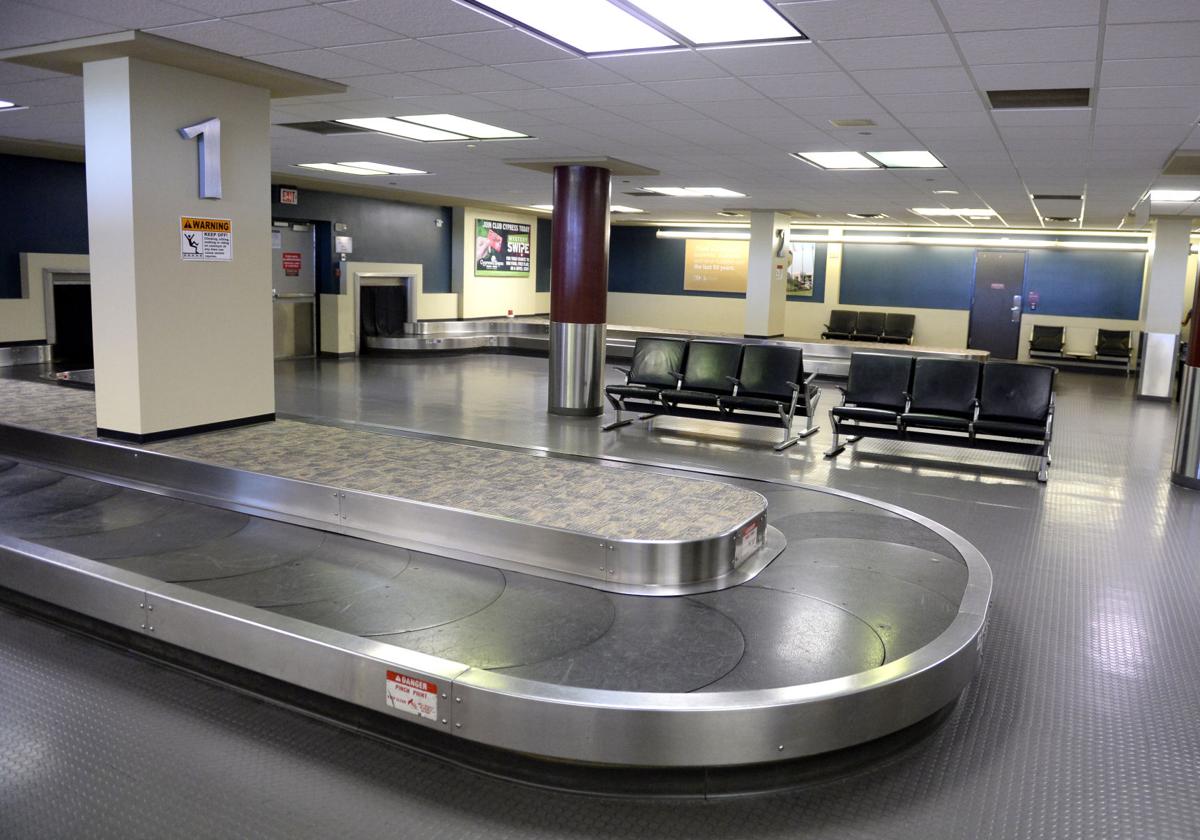 A near vacant Lafayette Regional Airport is seen on Wednesday, April 15, 2020, in Lafayette. 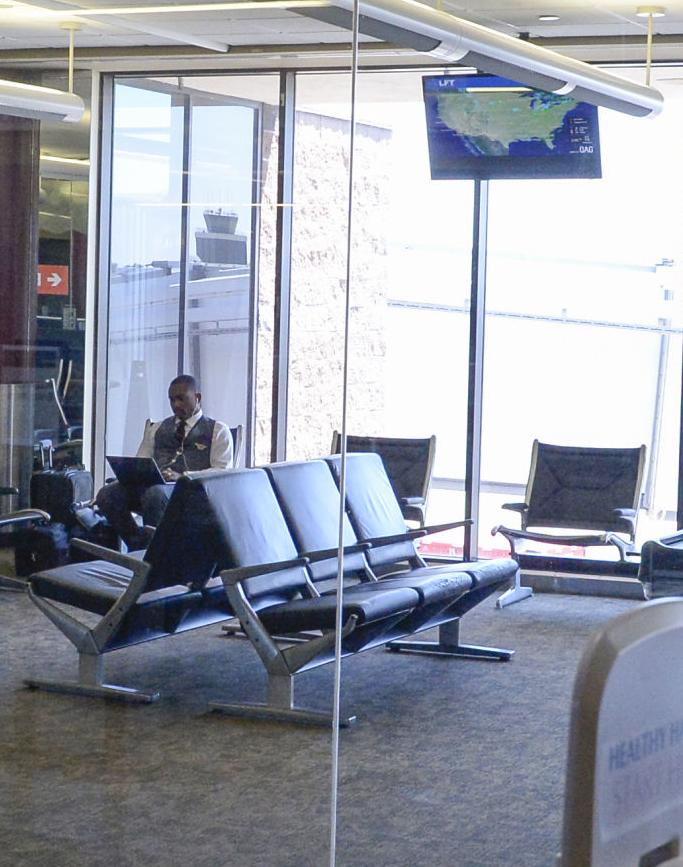 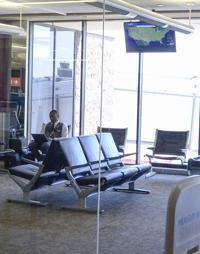 A lone airline employee sits at a gate as a near vacant Lafayette Regional Airport is seen on Wednesday, April 15, 2020, in Lafayette. 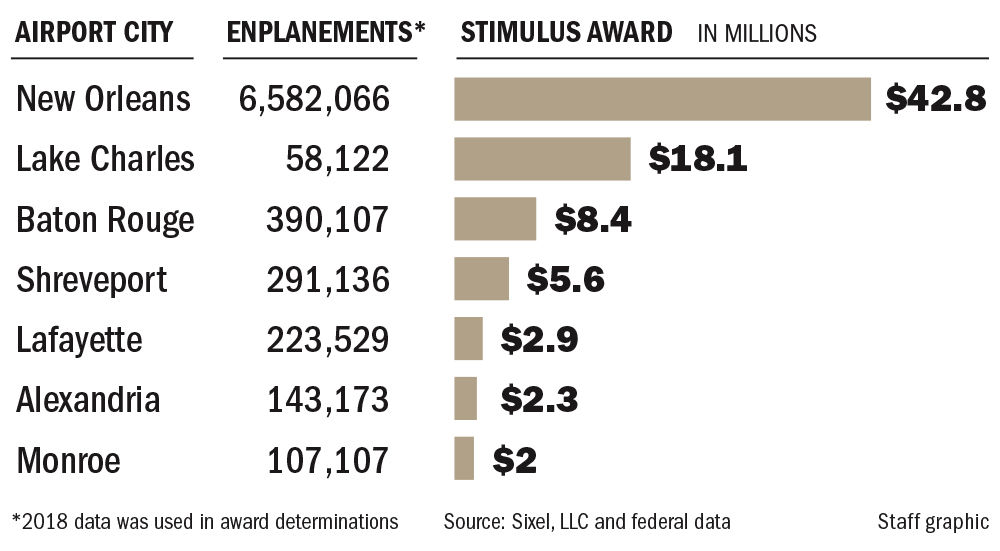 Federal stimulus awards to commercial airports are benefitting some more than others. Lake Charles Regional Airport, the least busy in the state, is slated to get $18.1 million — more than Shreveport, Baton Rouge and Lafayette combined.

A near vacant Lafayette Regional Airport is seen on Wednesday, April 15, 2020, in Lafayette.

A lone airline employee sits at a gate as a near vacant Lafayette Regional Airport is seen on Wednesday, April 15, 2020, in Lafayette.

As millions of Americans try to survive the coronavirus economic crash with one-time federal stimulus checks, some of the nation’s smallest airports are slated to receive windfalls large enough to float all expenses for years to come.

The Lake Charles Regional Airport, for example, is among more than 40 U.S. commercial airports scheduled to receive awards from the $2.2 trillion CARES Act package that are equivalent to more than five years of annual operating expenses, according to aviation consultant Mark Sixel’s analysis. Lake Charles Regional’s annual boarding passenger count — slightly less than 60,000 in 2018, the year of self-reported data that awards are based on — is about average for that group.

There were a total of 23,928 known cases of the novel coronavirus in Louisiana as of Sunday, with 1,110 of those being in the Acadiana area.

The awards, announced this week, come from a $7.4 billion CARES Act pot for commercial airports. They are eligible to reimburse any operating expense, and there is no spending deadline. That means Lake Charles Regional, with an $18.1 million award that is about eight times its operating budget, can squirrel away other revenue while floating on federal largess for the better part of a decade.

Lake Charles Regional administrators did not return calls or respond to a message sent through its website.

While the Lake Charles award seems generous, other airports are faring even better. Twenty airports are receiving awards amounting to more than a decade of their operating budgets. In the most extreme example, a 7,000-passenger airport in North Dakota is covered for exactly half a century in today’s dollars, thanks to an allocation formula that doesn’t consider budget sizes.

“Several airport managers have said we don’t need this money, we don’t deserve this money, we can’t figure out why we got this much money,” said Sixel, who advises airports across the country.

A publicly available Federal Aviation Administration slide presentation shows equal weight given to passenger counts and debt service, with debt service factored separately in two ways — as a ratio of reserve cash and percentage of all U.S. commercial airport debt.

But the agency has not explained how much each part of the formula is worth in dollars, making it impossible to verify individual award amounts.

It turns out, the businesses Mayor-President Josh Guillory allowed to re-open Friday despite the coronavirus stay-at-home-order could have bee…

“All we have been given is a lump sum,” said Sandra McQuain, director of the Alexandria International Airport. “I still haven’t been provided the specific math yet behind the numbers.”

The formula appears to arbitrarily favor small airports, like Lake Charles, that have no debt. Since it’s impossible to calculate the cash-debt ratio when debt is zero, the FAA automatically assigned these airports the maximum ratio allowed under the formula. That means an airport with $10 million in cash and zero debt receives the same amount under that part of the formula as a much larger one with $50 million cash and millions in debt.

While that advantage for zero-debt airports is traceable to the ratio cap, some airports with poor ratios are also making out well. An airport in rural Oregon with $362 in cash and $3.5 million in debt is getting $16.9 million in stimulus funds, or 20 times its operating expense. The CARES awards factor annual debt service, but not total debt.

Sixel said he couldn't determine if the formula is meant to reward high or low debt ratios.

The Lake Charles airport is by far the least busy of Louisiana’s seven commercial airports, yet its $18.1 million stimulus award surpasses combined total for airports in Shreveport, Baton Rouge and Lafayette — the state’s three busiest outside New Orleans. The awards will cover operations at the six airports not in Lake Charles for an average of about 8 months, in line with the national average.

Louisiana airport directors who spoke to The Advocate said it's too early to know how deeply the pandemic will hurt their bottom lines. But they said the awards should be enough fulfill their stated purpose, which is to maintain smooth operations during the crisis while avoiding layoffs and faltering credit ratings, according to the FAA.

But some were bewildered at the inexplicable disparities in the award amounts.

“You have airports that are receiving copious amounts of money with no debt,” said Steven Picou, director of Lafayette Regional Airport. “It’s not equitable.”

Asked to provide the calculations that resulted in the Lake Charles award, the FAA responded instead with a statement emphasizing that awards are not based solely on enplanements.

“Some airports will receive more money than others, despite having fewer enplanements,” the statement reads. “Comparing the final allocations among airports based solely on enplanements does not tell a complete or accurate story.”

When a strange new virus begins spreading through a community, state and local health departments know who to call: The contact tracers.

The agency did not respond to an additional request for the Lake Charles award calculations.

Small regional airports such as Lafayette — about an hour’s drive from Lake Charles and Baton Rouge in either direction along Interstate 10 — often compete for the same market share. The disproportionate stimulus awards are likely to interfere with fair competition, Sixel said.

Nothing would stop the Lake Charles airport from using its excessive award to blanket southwest Louisiana in marketing, for example. It could also lure airlines away from competing airports by waiving fees or offering revenue guarantees.

“It becomes a free airport for the airlines to operate in. That gives you a cost advantage over the airport down the road,” Sixel said.

As millions of Americans try to survive the coronavirus economic crash with one-time federal stimulus checks, some of the nation’s smallest ai…

Lafayette-based IberiaBank reported first-quarter earnings dropped to $32.8 million from $96.5 million for the same period in 2019.

Lafayette restaurant Izumi Ramen will be featured during an episode of Man V. Food at 8 p.m. Tuesday on The Cooking Channel.

Within two weeks of creating a $50 million small business loan program, the state has allocated about $30 million across a dozen financial ins…

Effects of coronavirus continue to show up in job numbers

Louisiana's nonfarm employment dropped by 20,300 jobs for the 12 months ending in March as the coronavirus pandemic starting taking a toll on …

With classrooms shuttered for the year, Louisiana public schools face these huge challenges

Now that classrooms are closed for the rest of the school year because of the coronavirus, local educators face two huge challenges: how to de…