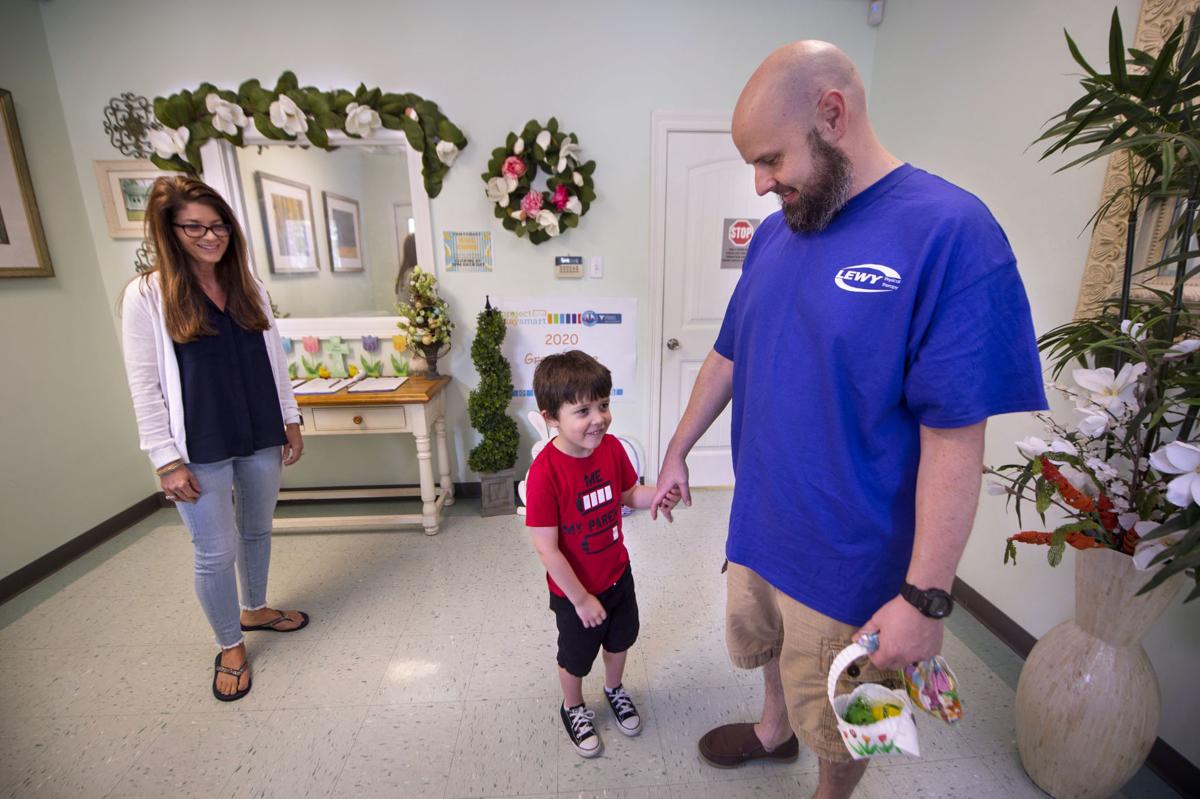 Mother's Choice Child Care Center owner Donna Blackwell, left, smiles after signing out James LeBlanc, 5, as he's picked up in the center's foyer by his father Josh Daigle, right, before heading home. Having parents ony go as far as the foyer is one of many precautions being taken at the center, one of the few day care centers open still during the novel coronavirus COVID-19 public health threat that has shut down many businesses. 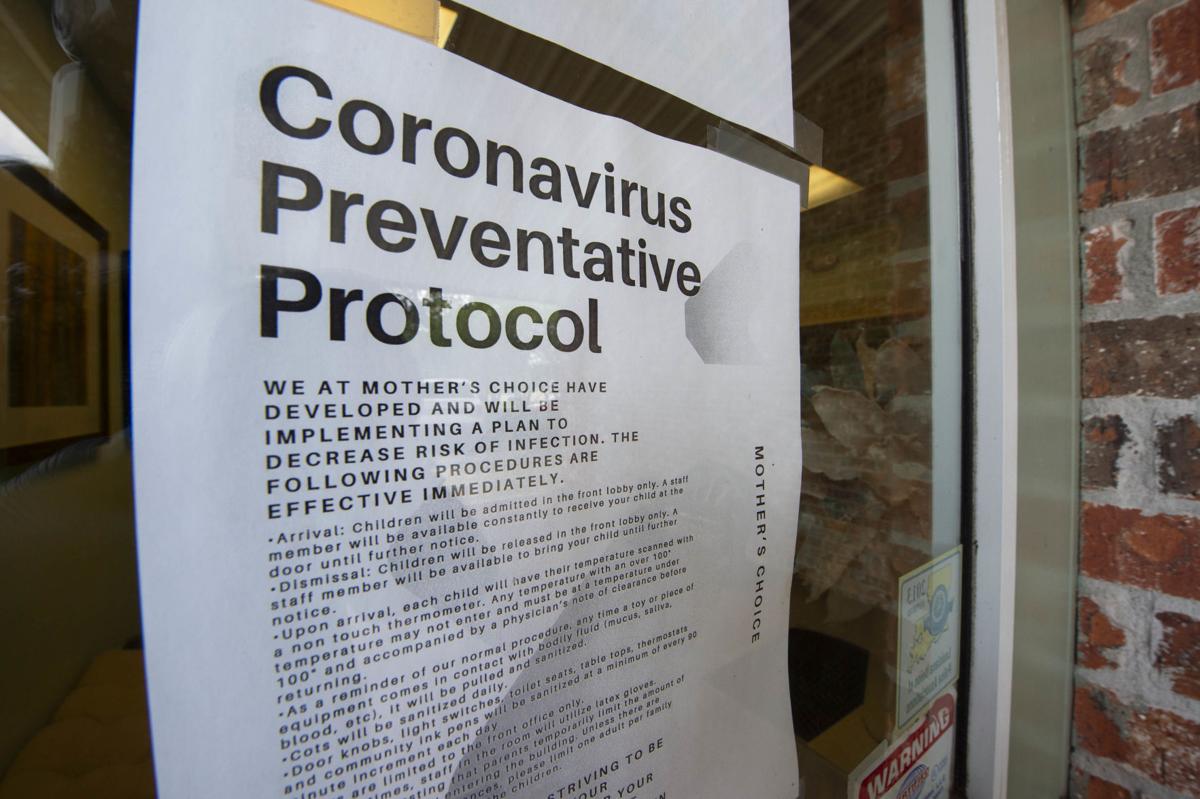 Mother's Choice Child Care Center owner Donna Blackwell, left, smiles after signing out James LeBlanc, 5, as he's picked up in the center's foyer by his father Josh Daigle, right, before heading home. Having parents ony go as far as the foyer is one of many precautions being taken at the center, one of the few day care centers open still during the novel coronavirus COVID-19 public health threat that has shut down many businesses.

Child care providers have lost at least $1.7 million because of closings sparked by the coronavirus and sites that care for about 12,500 children are in danger of staying shut permanently, according to a statewide survey released Thursday.

Nearly three out of four early learning centers — 72% — say they are not collecting tuition from families during the pandemic.

The survey was done by the Louisiana Policy Institute for Children, an advocacy group for child care sites that mostly cater to children from birth to age 5. The institute plans to do followup surveys.

Only 31% of publicly licensed early learning centers remain open amid the outbreak of the coronavirus, officials said Tuesday.

Only 31% of about 1,400 publicly licensed centers statewide remain open and those are mostly serving the children of doctors, nurses and others considered essential workers not covered by Gov. John Bel Edwards' stay-at-home order.

The survey was done from March 16-23, before the spread of the virus accelerated and led to the temporary closing of hundreds of centers.

That means losses are likely well above the $1.7 million pinpointed in the survey.

"We really have no idea how much this is costing industry," said Libbie Sonnier-Netto, executive director of the institute.

"The child care sector, which already operates on thin financial margins, is experiencing serious, negative impacts from COVID-19 and the full extent of those impacts is yet to be seen," the report says.

COVID-19 is the illness caused by the coronavirus.

Leaders of early learning centers initially said they planned to remain open, especially to aid families who have to work. However, lots of families are now keeping their children at home since they are at home because of the governor's order or because of employment issues.

Despite the closing of public schools statewide because of coronavirus, operators of some early learning centers said Friday they plan to rema…

Sherrel Pointer took the survey when her center was still open. At the time, only a few of her children stopped coming and she was hopeful.

“A lot has changed since then,” she said.

Pointer’s Baton Rouge center, Treasures from Heaven, has earned the state’s top “excellent” rating for centers since Louisiana launched its early childhood accountability system three years ago. When the stay-at-home order hit, Pointer decided, for safety reasons, she needed to close down.

As the crisis has worn on, she’s not sure how long she can afford to stay closed. She’s considering getting a small business loan, but it’s predicated on her continuing to employ the bulk of her staff, which she’s not sure she can do much longer.

“I do have money to pay them for one more period, but after that it’s all gone,” Pointer said.

A total of 78% of the child care providers surveyed say they have lost revenue because of the coronavirus.

About one-third of early learning centers say they will close for good if the shutdown drags on. In addition to serving about 12,500 children, these centers employ about 2,000 full-time and part-time workers.

Jessica Baghian, assistant state superintendent of education, said if these most at-risk centers close for good, parents "will be far worse off than we were before the pandemic."

Mother’s Choice Child Care Center in Baton Rouge is one of 74 child care centers in East Baton Rouge Parish that remain open, about 100 fewer than a month ago.

Like other centers sticking it out, Mother’s Choice has seen the number of children it serves drop dramatically, and the center has had to temporarily lay off staff. Operations have become more expensive with the limitations of no more than 10 people in a room.

Erica Machen, assistant director of Mother’s Choice, said “it was very scary” at first, but financial concerns, while still serious, have lessened a bit. She said the state has helped by expanding the eligibility for its Child Care Assistance Program to critical workers during the pandemic.

“I’m less fearful now than I was at the beginning about the finances,” Machen said. “I’m more fearful to be honest about safety.”

The center, which is located off Old Hammond Highway not far from Ochsner Medical Center, already served many children of parents who were first responders and health care workers. Young children, Machen said, aren't getting sick, but may still have COVID-19.

“Those are your invisible carriers, and our kids go home with people who are on the front lines, so that’s what has us worried,” she said.

To protect her staff, the center is cleaning even more vigorously than before, checking everyone’s temperature and cleaning behind the children throughout the day.

“My staff is exposed daily and they come anyway,” Machen said. “They are here because they want to be here.”

The closings and other upheaval triggered by the virus come at a time when health care workers and first responders especially need assistance.

A total of 44,089 registered nurses and other health care workers and law enforcement in Louisiana need child care, according to the Federal Reserve Bank in Atlanta.

That represents nearly 1 of every 4 workers that fill those essential jobs.

Until the stay-at-home order is lifted, Pointer said, she won’t reopen Treasures from Heaven, but she knows other child care center owners who’ve reopened, despite their own misgivings.

“They feel like if they don’t open their doors now, they will be closed for good,” she said.

A top state official said Sunday that Louisiana's earliest learners should stay home if possible because of the novel coronavirus.