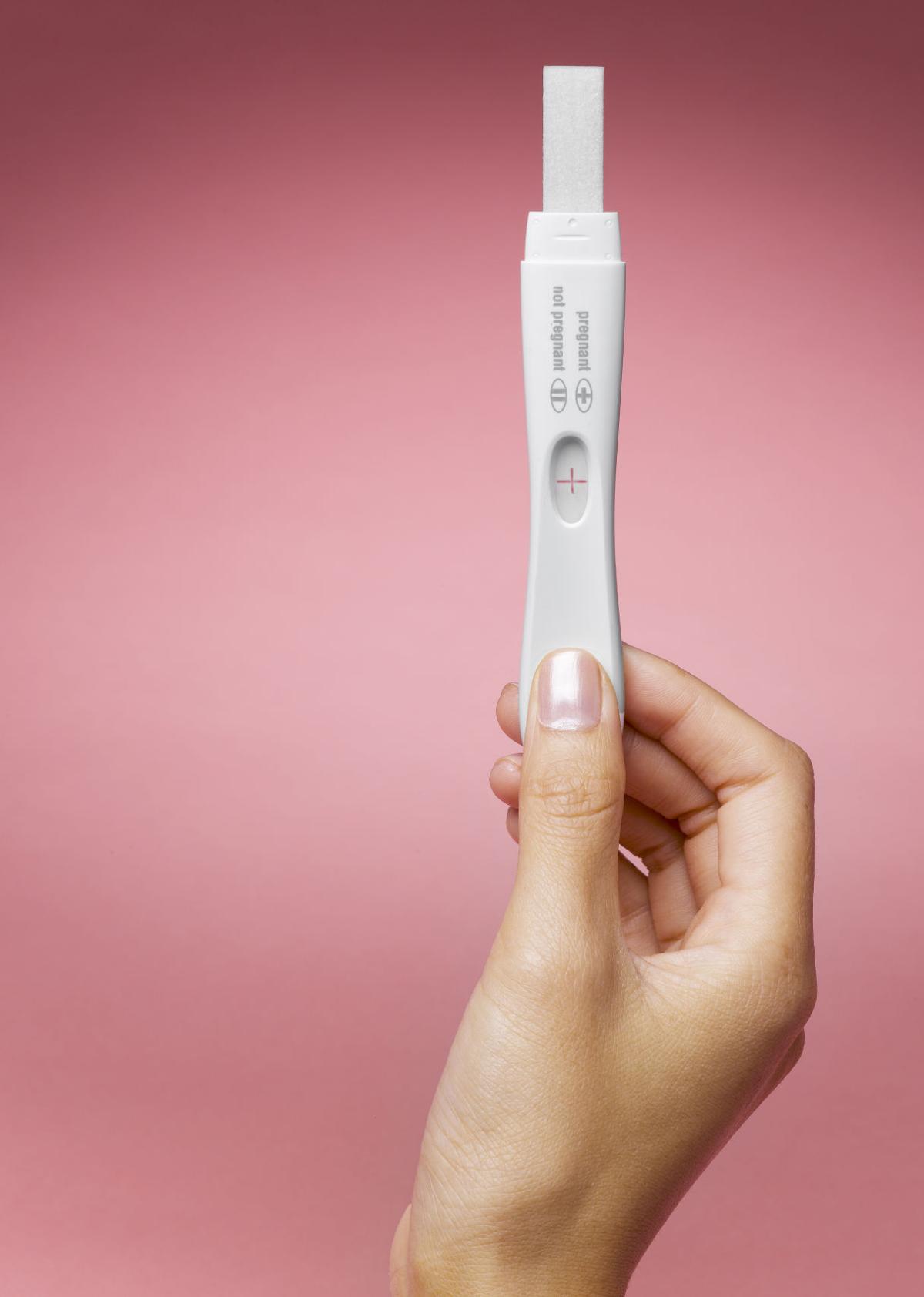 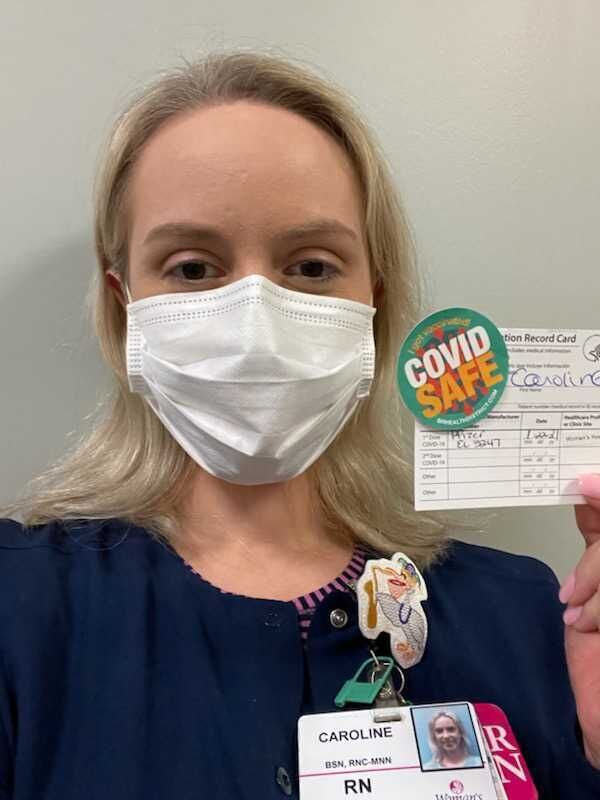 Caroline Stewart, a nurse at Woman's Hospital in Baton Rouge, received her COVID-19 vaccine while pregnant.

When news broke that the newly developed coronavirus vaccine would soon be released, Woman's Hospital nurse Caroline Stewart had just discovered she was pregnant with her second child.

Stewart, 33, works with high-risk pregnant women, so she was interested in getting the vaccine to keep them safe. But she was also unsure if she would even be eligible to receive a dose; pregnant women were not included in vaccine trials for either Moderna or Pfizer.

She was "pleasantly surprised" when she realized she qualified for the vaccine and spent time consulting with her obstetrician, along with several maternal-fetal medicine doctors about whether she should go for it.

"It’s a personal decision obviously, and it’s not for everyone," she said. "But I decided to get the vaccine."

On Jan. 22, Stewart received her first dose of the Pfizer vaccine and is scheduled for her second. Other than a little arm soreness, she said she feels "great."

"I want to protect myself, my family, even my patients," she said. "Personally, I’ve had friends and family that have had COVID, and I want to do anything to help prevent that if I can."

Caroline Stewart, a nurse at Woman's Hospital in Baton Rouge, received her COVID-19 vaccine while pregnant.

Stewart's experience is one many pregnant women will encounter soon, once the vaccine becomes more widely available. Others who hope to conceive are also weighing their options against a deluge of misinformation about how the vaccine will affect their fertility.

Some obstetricians say patients have come to them with concerns. They have stressed that pregnant women receiving the vaccine is a personal decision, but one that is ultimately safe based on guidance from the country's leading health organizations.

Dr. Pamela Simmons, a maternal-fetal medicine doctor at Woman’s, said she wants her patients to assess their risk to COVID-19 and where they fall along a spectrum. For instance, if a woman already suffers from chronic hypertension, is over the age of 35 and has diabetes, she is in a more vulnerable category than a healthy 22-year-old.

Other factors to consider include how easily an expectant mother can self-isolate for months during her pregnancy and if a woman is working in health care and therefore faces more exposure.

Simmons said this is particularly important because the Centers for Disease Control and Prevention has issued guidance saying pregnant people are at an "increased risk for severe illness from COVID-19 and death," and that other negative outcomes could include preterm birth.

Woman's Hospital says pregnant woman need to take extra precautions during the coronavirus pandemic, including self-isolating at home in the f…

When searching for information, she encouraged pregnant women to review credible sources run by medical professionals.

For instance, both the World Health Organization and the CDC say pregnant women should weigh the dangers of the virus against the relative unknowns and possible benefits of the vaccine. Similarly, the American Society for Reproductive Medicine says the mRNA vaccines “are not thought to cause an increased risk of infertility, first or second trimester loss, stillbirth, or congenital anomalies.”

The reproductive organization also does not recommend the vaccine be withheld from patients who plan to conceive, are currently pregnant or are lactating.

And on Wednesday, White House health advisor Dr. Anthony Fauci said in an interview for The Journal of the American Medical Association that 10,000 pregnant women had received the vaccine. So far, "no red flags" were detected by the Food and Drug Administration, he said.

Guidance is important, Simmons said, and she gives her patients the facts.

“We support the patient’s autonomy in making that decision and are really just here to kind of help navigate those waters,” Simmons said.

Terra Eubanks' children are beginning to learn: When Baton Rouge is in distress, "Mommy goes to work."

Ariyeil Dunnaway, a 27-year-old nurse at Baton Rouge General, had planned on getting the vaccine when discussions began early on in the pandemic.

However, as the months passed, two things happened: She suffered a miscarriage and then got pregnant again. After her pregnancy loss, she decided against receiving the vaccine to "play it safe."

A lack of data worries her, because she doesn't know how her body would react to the vaccine. However, after she has her baby, she said she will likely get the vaccine while breastfeeding. She hopes that by her June due date, more research will simplify her decision.

Dr. Jonathan Wise, an obstetrician at Baton Rouge General, acknowledged that limited data can be a big factor in some patient decisions about the vaccine.

"Our data is very, very young and we’re continually learning," Wise said. "I don’t think that should be seen as a negative thing or a scary thing. I think it’s important people know we’re still learning."

Wise said he reassures his patients that no matter what they decide, he will support them and that nothing will change in their care based on their choice. He points them to advice from leading health organizations to make that decision less difficult.

Ke'Lin Dillard had planned everything for the arrival of her new baby — even amid a pandemic. She had hosted a socially distanced, drive-by ba…

Kaitlin Green, an intensive care unit nurse at Baton Rouge General, was no longer pregnant or breastfeeding her 14-month-old when the vaccine came out. However, she was concerned with how the vaccine may affect her fertility, because she wanted to have another child.

Green, 33, ultimately decided to get the jab after researching the issue and reading that the mRNA vaccine was unlikely to affect fertility. She has been a nurse for eight years and has worked in the ICU since 2014, which also had some bearing on her decision.

"I’ve been through a lot of bad flu seasons," she said. "I’ve never been through anything like this. We’re seeing really young, otherwise healthy people get sick. That’s more so the exception, not the rule, but it is happening."

Witnessing the virus wreak havoc even on healthy bodies contributed to her choice. She said that people trust nurses, not "Big Pharma," so getting the vaccine was important to set an example for others.

"Say in the long run that it does affect my fertility," she said. "I kind of personally feel getting the vaccine is so much bigger than if I can have a second baby, because I do have one healthy child. It’s about everybody that’s high-risk and protecting them and being the bigger person and stepping up and being an example for people."

After giving birth with COVID, this mom couldn't hold her newborn for a week

Abi Bordelon finds herself holding her second child more than she did her firstborn because of the pandemic.

Baton Rouge mom dies from coronavirus, and her premature baby girl is fighting for her life

When Michael Conish left the hospital Wednesday morning, he had good reason to be hopeful.