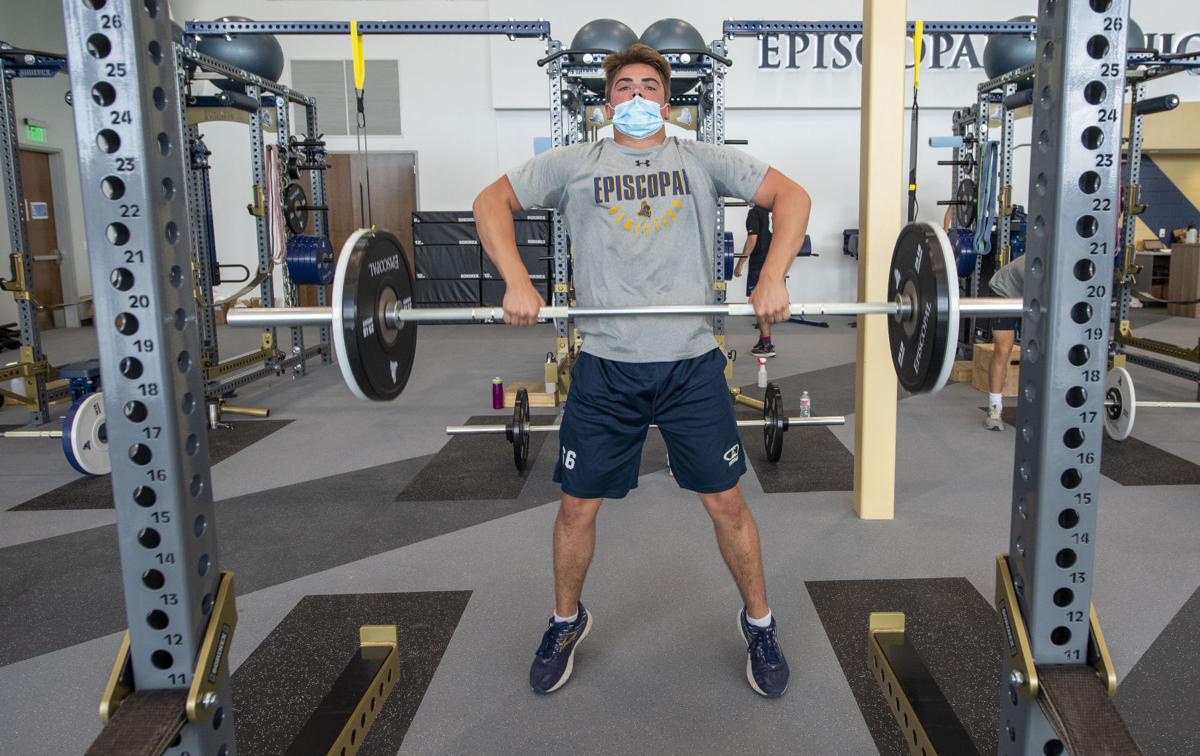 Evan Meek works in the weight room during the first day of workouts at Episcopal High School Tuesday June 9, 2020, in Baton Rouge, La. 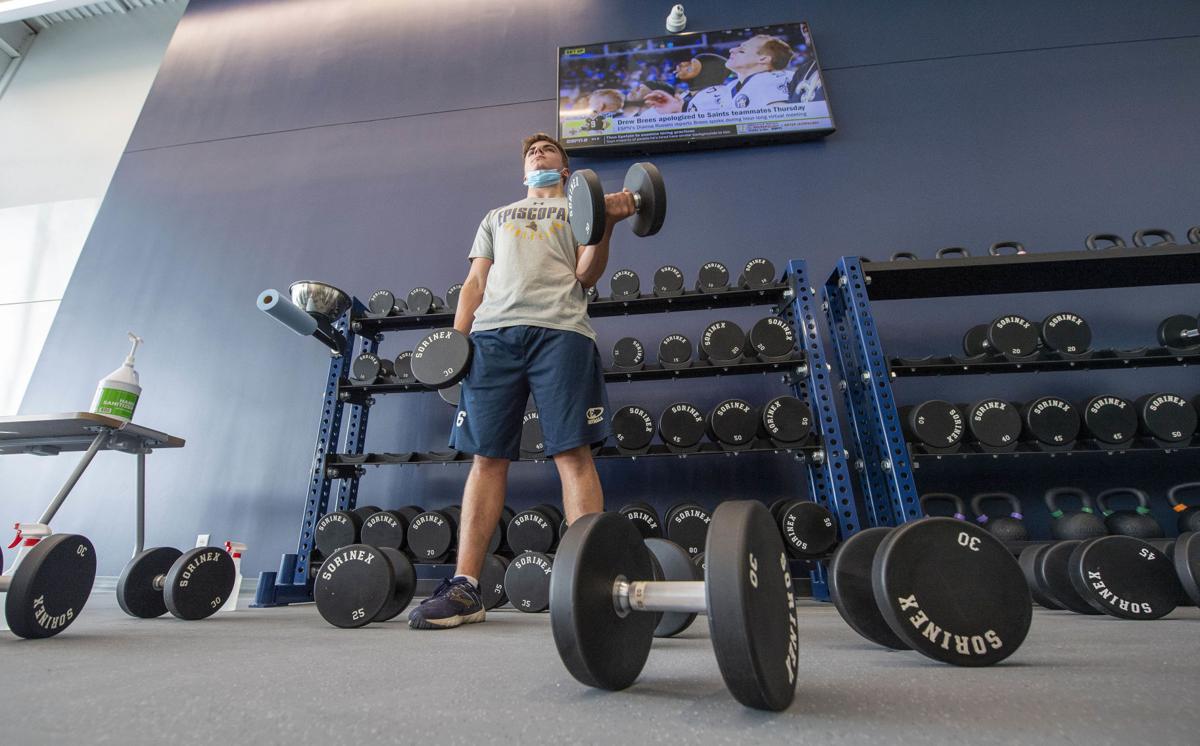 Evan Meek works with the free weights in the weight room during the first day of workouts at Episcopal High School Tuesday June 9, 2020, in Baton Rouge, La. 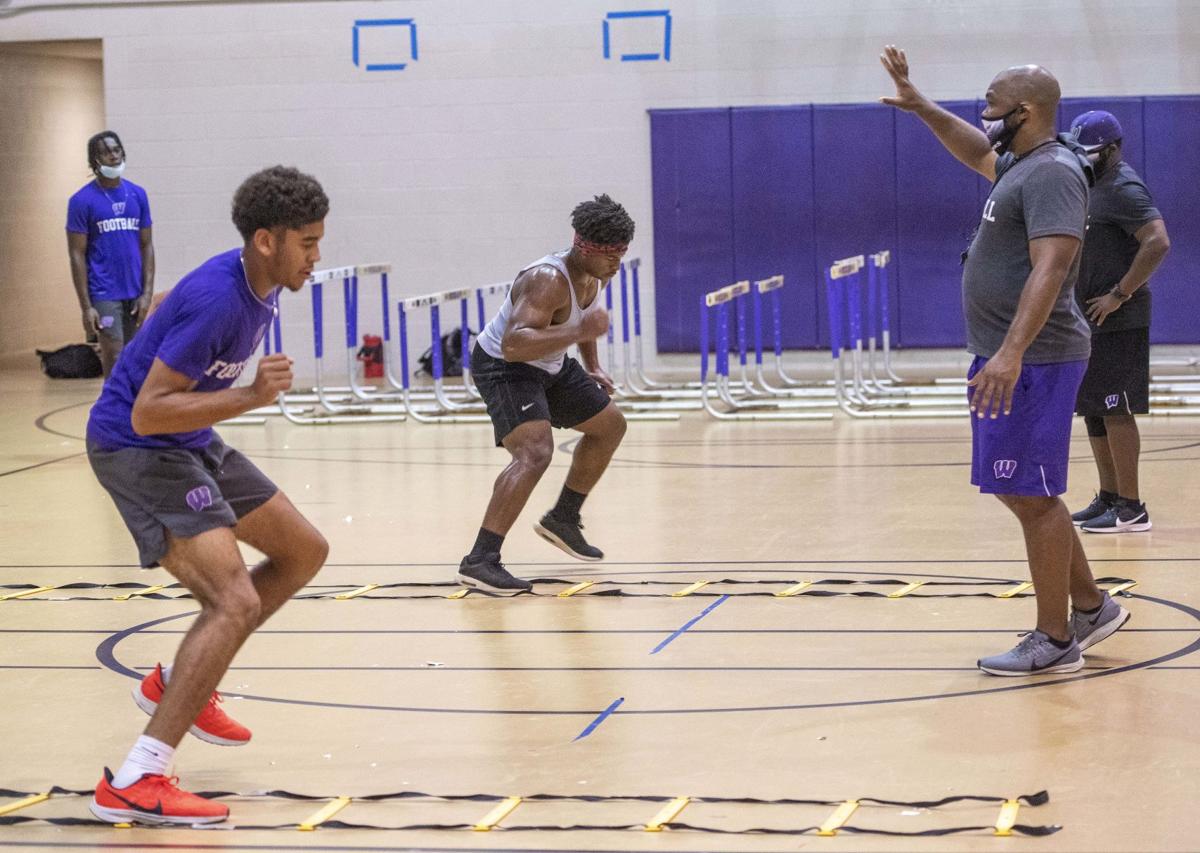 Evan Meek works in the weight room during the first day of workouts at Episcopal High School Tuesday June 9, 2020, in Baton Rouge, La.

Evan Meek works with the free weights in the weight room during the first day of workouts at Episcopal High School Tuesday June 9, 2020, in Baton Rouge, La.

There was a new cone drill in place when Woodlawn High football players returned to campus for the first time in three months Tuesday morning.

This exercise was not designed to measure speed or agility. Cars driven by players or their parents followed the cones as they pulled up alongside the school’s gym around 7 a.m.

“Since this was the first day, we didn’t know what to expect,” Woodlawn coach Marcus Randall said. “But it was good. There was a line of cars by 7 and between 7:15 and 7:45 we processed all of them.

“They got a temperature check, answered health questions, turned in school/LHSAA paperwork and had their gear/supplies checked before they got out of the car. The best part was seeing their faces. They are happy and so were we. It was great to be here.”

Woodlawn was among the Baton Rouge area schools that conducted its first summer workouts in multiple sports Tuesday. The first workouts since the COVID-19 pandemic closed schools in March were originally set for Monday, but the uncertainty surrounding Tropical Storm Cristobal led all but The Dunham School to postpone for an extra day.

“I was so excited last night that I had trouble going to sleep,” Woodlawn quarterback Rickie Collins said. “I missed seeing my teammates and the coaches. I missed working out with them.

“At home I was able to throw, run and lift weights on my own. But it is not the same. For me, this feels like Christmas.”

Randall said approximately 90% of Class 5A WHS’ 65-plus players participated in the optional workout. Players took turns at stations in the weight room, auxiliary gym, track and outdoor practice area.

Wide receiver Tramon Douglas II added, “I worked out and stayed in shape. Out here with my teammates, I push myself even harder. This is the start … we’ll be at it again tomorrow.”

A few miles away, the process at Class 2A Episcopal the process was a bit different, but the sentiments expressed by the players and coaches were the same.

“I missed seeing all their faces,” Episcopal football coach Travis Bourgeois said. “We did Zoom meetings with them all through quarantine, not to teach football, but to check in and see how they were doing. But that is not the same as being able to see them.”

Rather than having all players report at once, Bourgeois divided his team in three groups. The first group started at 7:30 a.m. and then left before the second group began its workout. There were cones involved in the Knights’ process too.

As they arrived, players were lined up next to a series of large socially distanced cones. One-by-one players, walked up to athletic trainer Dean Mannina for their health/paperwork checks.

Because there is no locker room access and players at all schools are required to bring their own water and towels, it was not unusual to see a line of gallon water jugs positioned next to backpacks.

There was an added attraction for the Episcopal players, who got to lift weights in the school’s new fieldhouse for the first time. Before the pandemic, four players could have worked at each of the new weight stations. For now, at least, players worked solo.

After each lift, EHS players cleaned bars, benches and weights with sanitizer. Large bottles of hand sanitizer were positioned on a table behind the weight equipment. A second workout followed on the track.

“Getting the weight-lifting energy together was good,” Episcopal defensive back Oliver Jack said. “I woke early this morning and I even got here before the time for my group. I’ve missed the game and everything around it.”

“It’s been a long three months for us in quarantine,” EHS nose tackle Evan Meek noted. “We’re ready to put that work in.”

COVID quandary: Moves toward LHSAA sports during pandemic must be precise, evolving

As co-director of Tulane’s Sports Medicine Program and the Green Wave’s team physician, Dr. Greg Stewart is an authority on sports injuries an…