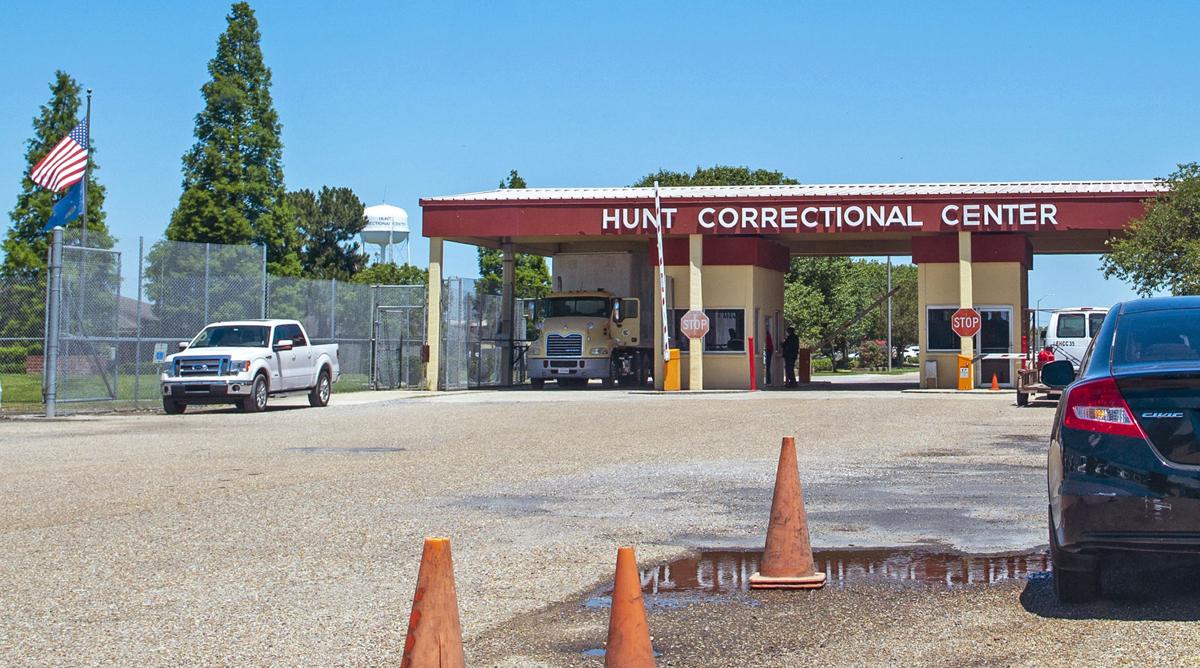 The front gate at Elayn Hunt Correctional Center prison Wednesday May 6, 2020, in St. Gabriel, La. Scientists say the excessive amount of cases at the prison suggest the Coronavirus could be more widespread in the population, with so many people at the prison being asymptomatic but still testing positive.

The front gate at Elayn Hunt Correctional Center prison Wednesday May 6, 2020, in St. Gabriel, La. Scientists say the excessive amount of cases at the prison suggest the Coronavirus could be more widespread in the population, with so many people at the prison being asymptomatic but still testing positive.

Results from a rare example of mass testing — conducted last month at a women's prison building in St. Gabriel — add to a growing collection of evidence that many more people could have been infected with the novel coronavirus than current testing data suggests.

About 85 percent of the roughly 200 inmates housed in the female dorms at Elayn Hunt Correctional Center have tested positive for the virus, but about three quarters of those confirmed cases were asymptomatic, according to state corrections officials.

Medical testing has focused almost exclusively on people experiencing symptoms, which could be painting an incomplete picture of how the virus is transmitted and how widely it has already spread.

While the prison testing does not provide a representative sample that can be used to draw significant conclusions about how the virus behaves in the outside world, it does present an example of the hidden spread that experts believe is occurring both behind bars and among members of the general public.

"We've seen research showing that a large portion of people will never show symptoms — and we found them at the prison," said Dr. Catherine O'Neal, an infectious disease specialist at Our Lady of the Lake Regional Medical Center.

It isn't clear how often people become infected but remain asymptomatic, though studies have produced estimates ranging from 25 percent to 80 percent of all cases. That's why health officials ask everyone to wear face masks in public and to take other precautions, even as businesses reopen and social distancing requirements become less stringent.

There may be a silver lining in the prison testing data, O'Neal said.

"In some ways, these numbers are reassuring to me because this suggests coronavirus behaves like all these other viruses we're more familiar with," she said.

What makes the coronavirus particularly dangerous right now is the lack of immunity among members of the general public. But O'Neal said that doesn't mean this is "something that goes above and beyond all other viruses," even though it's causing a global pandemic.

Corrections officials recently decided to conduct mass testing at the St. Gabriel prison after dozens of women, all housed in the same building, were experiencing coronavirus symptoms and had tested positive.

The prison is among just a handful of places across the state where asymptomatic people have been tested en masse, though the governor announced last week his plans to expand such testing in close quarters environments, including other prisons and nursing homes. That announcement came as the U.S. Centers for Disease Control said people with no symptoms but who live in congregate settings should be prioritized for tests.

The CDC also released a report Wednesday acknowledging the prevalence of coronavirus outbreaks in American jails and prisons, and recommending steps such facilities should take to minimize the spread.

At least four state inmates and three prison employees have died from coronavirus and almost 500 others have tested positive across the entire state prison system, according to the latest Department of Corrections data.

The women housed in the female dorms at Elayn Hunt Correctional Center alone account for almost half the total number of cases among all inmates and DOC staff, which raises questions about how many asymptomatic cases are going uncounted in other state prison facilities where widespread testing isn't available.

Test results from the women's prison have also contributed to a spike in cases for St. Gabriel and the surrounding area, which now has the highest number of cases reported in any single census tract across the state. When factoring in population, the number of cases per capita in that census tract is more than 3.5 times the statewide average, according to an Advocate analysis of statewide numbers.

Louisiana health officials started releasing case counts by census tract in recent weeks and confirmed that DOC inmates are counted based on the location of their prison, though there appears to be a possible lag time in the reporting process that could mean some cases are missing from the current data.

The state's female prisoners are housed at various facilities — including the building at Hunt and the former Jetson Center for Youth, a previously closed juvenile detention center in Baker — since the Louisiana Correctional Institute for Women flooded in 2016 and hasn't been rebuilt.

"Due to the continual increase of positive tests and the high percentage of COVID-19 positives at LCIW Hunt, the department thought it prudent to test everyone there to determine whether there were asymptomatic cases," DOC spokesman Ken Pastorick said in a statement.

He said the female dormitories at Hunt typically house 195 women, though the number fluctuates slightly because of transfers or hospitalizations. At least 165 of those women have tested positive in recent weeks, with about three quarters of the confirmed cases never resulting in symptoms, according to DOC data.

DOC declined to comment on the test results themselves. A spokesman for the Louisiana Department of Health, which oversees testing, said the department "cannot comment on the health of individuals at correctional facilities," though he also noted that state health officials "support increased testing in congregate settings" and will adhere to federal guidelines on the issue.

A widespread lack of testing has been a defining feature of the nation's response to the pandemic, though more test kits are becoming available, allowing CDC officials to loosen criteria for who can get tested.

"The high positivity rate suggests that there are likely many more people with COVID-19 who are not being tested, and in jails and prisons this lack of testing is often accompanied by a lack of access to care, with deadly results," said Dr. Homer Venters, former chief medical officer at New York City's Rikers Island jail.

"As COVID-19 spreads so rapidly in prisons and jails, it will overwhelm local health systems," he said in an email. "I fear that detention settings will face prolonged and worsening COVID-19 outbreaks" even as economies start reopening and leaders focus on "looking past the outbreak."

Other experts in prison health care said the test results are alarming but unsurprising. Mass testing of prison inmates in other states has similarly found high percentages of asymptomatic carriers.

"This confirms what we feared and expected based on hundreds of years of public health research and what we know about correctional environments," said Dr. Marc Stern, former medical director for the Washington State Department of Corrections who now teaches at the University of Washington's School of Public Health. "These are places where people live, sleep, eat and recreate in close proximity, and infections are going to spread quickly through places like that. This is not a new realization."

Stern and others cautioned against using the data from prison settings to make predictions about how the virus is spreading in the outside world.

"Those are two very different places," he said, noting that the data should instead be used to inform how officials respond to outbreaks behind bars. "I hope Louisiana authorities are learning from what happened here."

The Blue Angels fly over New Orleans on Wednesday to salute the city's essential frontline workers of the coronavirus pandemic.