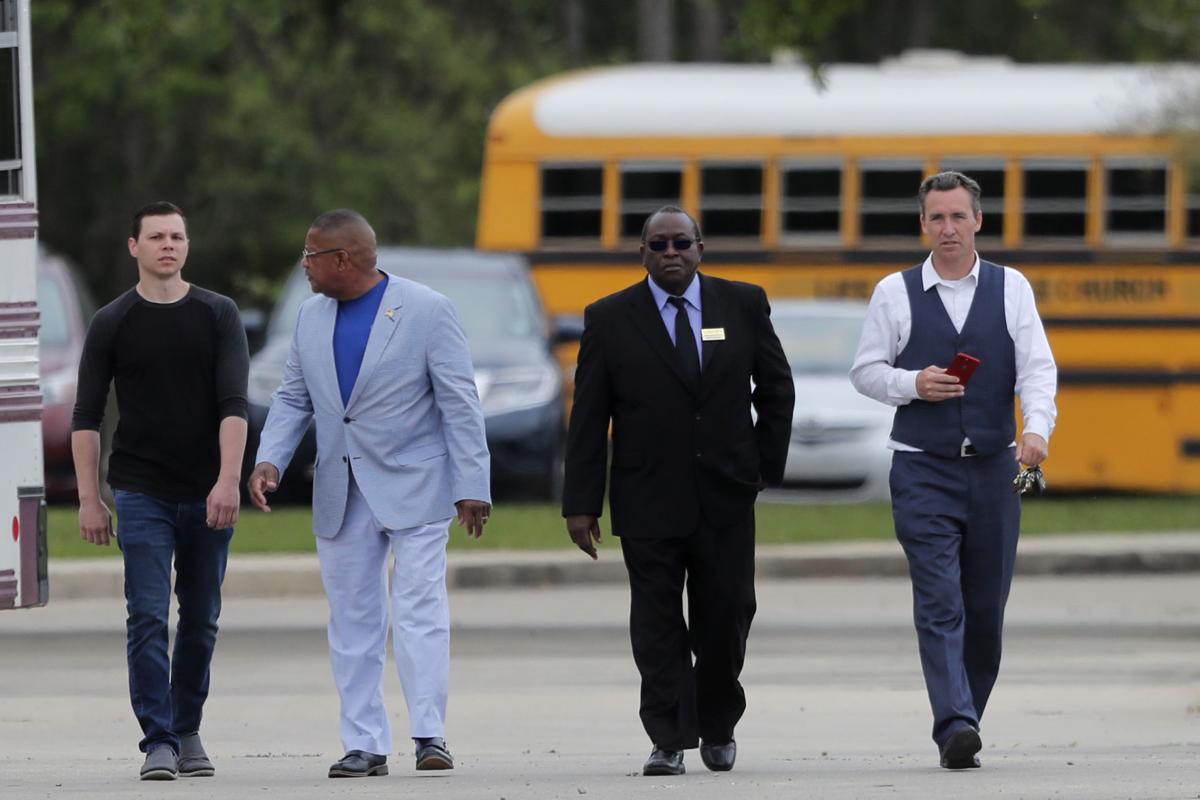 Pastor Tony Spell, right, walks with others after services at the Life Tabernacle Church in Central, La., Sunday, March 29, 2020. Spell has defied a shelter-in-place order by Louisiana Gov. John Bel Edwards, due to the new coronavirus pandemic, and continues to hold church services with hundreds of congregants. (AP Photo/Gerald Herbert) ORG XMIT: BAT2003291844016313 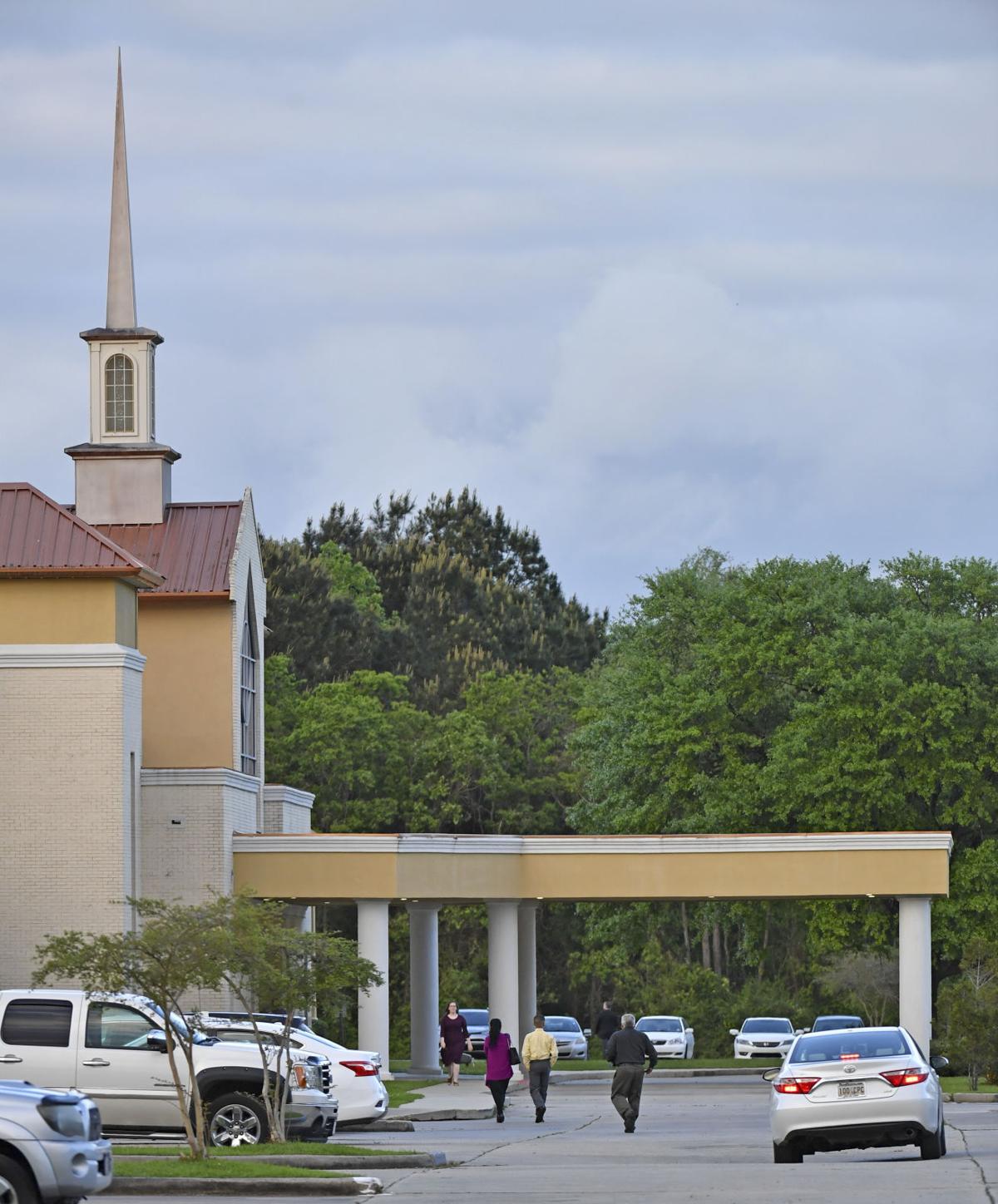 Pastor Tony Spell, right, walks with others after services at the Life Tabernacle Church in Central, La., Sunday, March 29, 2020. Spell has defied a shelter-in-place order by Louisiana Gov. John Bel Edwards, due to the new coronavirus pandemic, and continues to hold church services with hundreds of congregants. (AP Photo/Gerald Herbert) ORG XMIT: BAT2003291844016313

Attendance at a Central church headed by a pastor who has defied Louisiana's attempts to restrict crowd size appears to be shrinking from recent weeks, police said Sunday, as the pastor brushed off law enforcement head counts as untrue.

Sunday's service at Life Tabernacle Church attracted about 130 people, down from nearly 500 who attended last week's Easter services, according to police who've been counting the heads of people entering the church for services and forwarding their reports to the District Attorney's Office.

The attendance drop logged by law enforcement follows the recent death of a church congregant and the hospitalization of a lawyer tapped to represent the church's battle against Gov. John Bel Edwards' order limiting crowd sizes to less than 50 people.

The church and its lawyers have argued that grocery stores and other businesses that have remained open are exempt from Edwards' order. Most stores, however, have recently put their own limits on the number of people allowed to enter.

The defiant pastor of Life Tabernacle Church, who has said the power of faith and the spiritual need to gather in person trumped Louisiana's a…

Sources confirmed to The Advocate that the congregant, a 78-year-old man, had contracted the respiratory illness caused by the new virus before he died. A 59-year-old Baton Rouge lawyer hired to represent the church has been hospitalized since last week while battling COVID-19.

It's not clear where the men contracted the virus.

The church lawyer, Jeff Wittenbrink, said he has been at Baton Rouge General since Tuesday as his fever and persistent coughs progressively worsened. He said he had regularly gone to grocery stores and other businesses, sometimes twice per day.

Spell had said his Easter service drew more than 1,300 and dismissed the accuracy of law enforcement's number.

"The cops are liars," he told The Advocate Sunday when reached by phone. "Second, never trust a cop after this pandemic."

Spell said his staff track attendance and report it to him in the evening. In early April, Spell said he preached to 1,800 people after his church packed over two dozen buses to bring worshipers to the Hooper Road church. Police say the church hasn't seen nearly that many people but enough people to violate the state's social distancing order.

Spell acknowledged last week that he knew Wittenbrink had contracted the coronavirus and was praying for him. Spell also had disputed the East Baton Rouge Parish coroner's findings, calling them "a lie" and telling local television stations the man, 78-year-old Harold Orillion, died of a broken heart after his son's recent death.

Orillion's death was one of 79 deaths tied to the coronavirus in the parish and nearly 1,300 statewide, according to the latest state and coroner figures on Sunday.

Spell was cited last month on six misdemeanor infractions for violating the state's emergency limit on crowd sizes. He has continued to return to the pulpit to preach to his flock and has instructed them to take precautions, like not touching others outside their family and remaining home if sick.

Central Police Chief Roger Corcoran said Sunday his office has been monitoring church services for the past several weeks, but taking action is tricky.

Officials worry that sending law officers into the building may expose them to the virus if someone inside has it. Corcoran added that the constitutional protections houses of worship enjoy has also made taking action a legal minefield.

Cited Central church expected 2,000-plus for Easter amid coronavirus; it drew far fewer

A Central pastor who said he'd attract 2,000 people for Easter celebrations despite a state ban on large gatherings amid the coronavirus outbr…