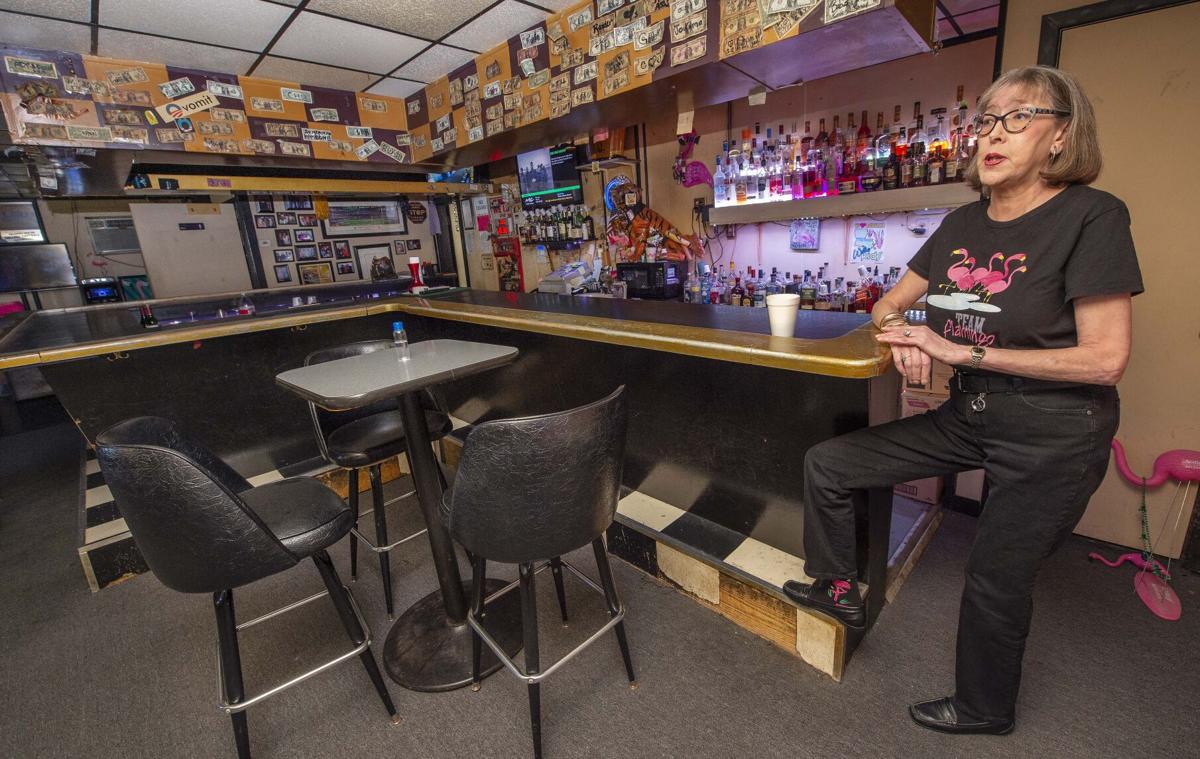 Linda White, who owns The Jefferson Lounge located at 4336 Floynell Drive, talks about what she expects while getting the bar ready to open. East Baton Rouge Parish bars are now able to go back to business after the coronavirus rate fell below 5%. 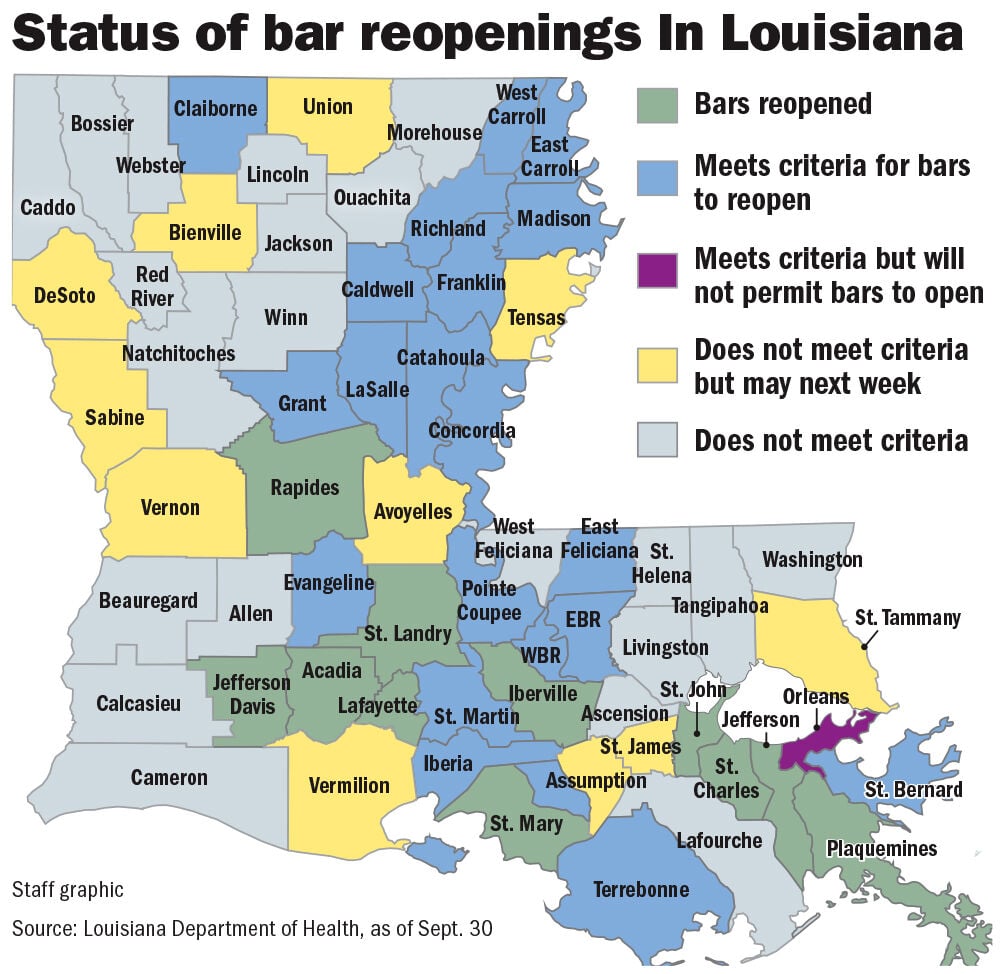 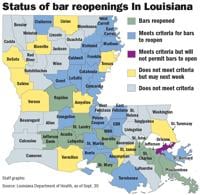 Linda White, who owns The Jefferson Lounge located at 4336 Floynell Drive, talks about what she expects while getting the bar ready to open. East Baton Rouge Parish bars are now able to go back to business after the coronavirus rate fell below 5%.

East Baton Rouge Parish Mayor President Sharon Weston Broome and state officials said Wednesday that bars in the parish could re-open after a weekslong coronavirus shutdown, despite doubts raised when the Metro Council fell one vote short of passing a resolution doing so.

The procedural dust-up forced Broome and Ernest P. Legier Jr., the state alcohol and tobacco control commissioner, to try to reassure the public Wednesday afternoon that bars could reopen after the parish hit health benchmarks.

They reiterated the state Office of Alcohol and Tobacco Control’s order to reopen based on a request that Broome made Monday would stand and that bars in East Baton Rouge could open immediately under the eased restrictions.

“The agency is comfortable having received the request for opt in from the mayor’s office. The approval will not be rescinded,” Legier said, according to a city-parish statement.

Bar owners, who had been waiting for weeks to reopen, welcomed the decision.

“We’re going to open the first hour they allow us to,” said Ross Cook, one of the owners of Bogie’s, an LSU-area bar.

But the enthusiasm of bar owners and assurances from Legier and Broome didn’t bend the legal interpretation of Parish Attorney Andy Dotson, who argued that the failed council vote means the ATC hasn’t yet received the proper opt-in request for Phase 3 required under Gov. John Bel Edwards’ own emergency order.

That order says the “governing authority of the parish must affirmatively opt-in to allow on-premises consumption.”

In Baton Rouge, the “governing authority” is the Metro Council, not Broome, Dotson said.

The council has already set another special meeting at 4:30 p.m. Friday to revisit the issue.

The dueling attempts by the council and Broome to pursue the reopening of bars comes during a contested and crowded mayoral primary that includes challenges from Councilman Matt Watson and bar owner Jordan Piazza and continued pressure from businesses and others to ease coronavirus-related restrictions that have hampered economic activity.

But those attempts also came amid the continued, heavy burden that the region’s Black community has born from the novel coronavirus, both in cases and in deaths.

Baton Rouge bar owner unhappy with reopening regulations, but 'I'll take anything... at this point'

Linda White said while she’s pleased the number of coronavirus cases in East Baton Rouge has dropped enough that she can reopen her bar, The J…

Councilwoman Erika Green cast the lone abstention Wednesday to seek reopening bars, preventing the council resolution from getting the seven votes needed to pass. Then she left the meeting, forcing the council to adjourn due to a lack of a quorum.

“I have some concerns for the community’s health,” Green said later about her decision not to participate in Wednesday’s vote.

In East Baton Rouge Parish, 56% of the COVID-19 deaths are among the parish’s Black residents, a share of the viral toll that is about 22% greater than African-American’s representation in the parish population, state health data show.

Unlike Green, other Black council members did not show up for the meeting, leaving the members who did appear with a narrow margin to get the resolution passed.

East Baton Rouge was among four parishes in the Baton Rouge area on Wednesday that hit health standards that set the stage for bars to reopen and have on-premises alcohol sales again after the summertime shutdown.

Under Gov. John Bel Edwards' Phase 3 rules, parishes with 5% or less test positivity over two consecutive weeks can seek to have their bars reopen for on-premises alcohol consumption. The positivity rate shows the share of positive tests in a given batch of testing.

Health experts say the percentage is one measure of viral spread but also an indicator of the penetration of testing efforts into the community. All things being equal, increased testing should lead to lower positivity rates as long as the rate of viral spread isn't increasing.

Before bars, daiquiri shops and breweries can allow on-premises alcohol consumption, however, the parishes must opt-in with the state ATC.

Two other parishes met the benchmarks also, East Feliciana and Pointe Coupee, but only officials in East Feliciana indicated by Wednesday evening that they planned to opt in.

East Baton Rouge Parish seemed to be on a similar track as West Baton Rouge, receiving a quick reopening order from the ATC not long after the state health data was published midday Wednesday.

A few hours later, however, the Metro Council gathered in a special meeting to adopt its own opt-in resolution but only mustered six of the seven votes needed: Council members Scott Wilson, Denise Amoroso, Dwight Hudson, Matt Watson, Trae Welch and Jennifer Racca.

In addition to Green’s abstention, Councilman Chandler Loupe, one of the sponsors of the measure, was absent. His absence left Watson frustrated after the resolution failed.

“The legality of all of this is completely in flux,” Watson said.

Bars that don’t sell food have been largely shut down since early March as part of an effort to control the spread of the coronavirus pandemic. Bars briefly reopened in June, when the state moved into Phase 2 of the pandemic recovery. Edwards shut down the bars several weeks later, in mid-July, after a rise in coronavirus cases.

With the looser rules in Phase 3, bars and other alcohol-serving establishments can operate with table service at 25% capacity with up to 50 patrons until 11 p.m. Other restrictions also apply.

Linda White, owner of the Jefferson Lounge, said she’s pleased coronavirus cases are down and she can reopen but is disappointed with the rules she’s going to be operating under.

“We’re a small place, so we can only get 15 people in here,” she said. “We can’t have a pool table, even though the pool halls are open.”

White said she hopes to reopen the neighborhood bar on Thursday.

She partially opened The Jefferson Lounge right after Labor Day, when she started offering curbside service, but it wasn’t successful.

White said selling curbside drinks was bringing in 80% less than what the bar normally does.

“But at least it was a little bit of income,” she said. “I was able to pay some bills with it.”

Cook, the owner of Bogie’s, didn’t like the 11 p.m. closure time because the crowd at Bogie’s doesn’t start up until 10 p.m. or so.

But he said his biggest problem is that he’s only going to have 12 employees working once the bar reopens, as opposed to the 40 or so people who used to be on the payroll.

Cook said he hopes to hire more but the important thing is that bars reopen and things get back to normal.

“That’s what people are looking for right now,” he said.

All four parishes in the Baton Rouge area that met the two-week state standard Wednesday had positivity marks of less than 5% for the weeklong period of Sept. 10 to 16.

New positivity data made public Wednesday for the period of Sept. 17 to 23 showed those four parishes had sub-5% positivity again and all four saw that rate drop in the latest week compared with the prior week's data.

Iberville Parish, which hit the two-week threshold last week and was granted authorization to reopen bars at the request of the parish president alone, saw its positivity rate fall further. The rate dropped from 4.2% to 2.3% week to week in the latest data.

After a failed vote to reopen Baton Rouge bars, Metro Council members take shots at each other

The Metro Council's failure to pass a resolution Wednesday didn't stop bars from reopening in East Baton Rouge Parish, but the failed attempt …