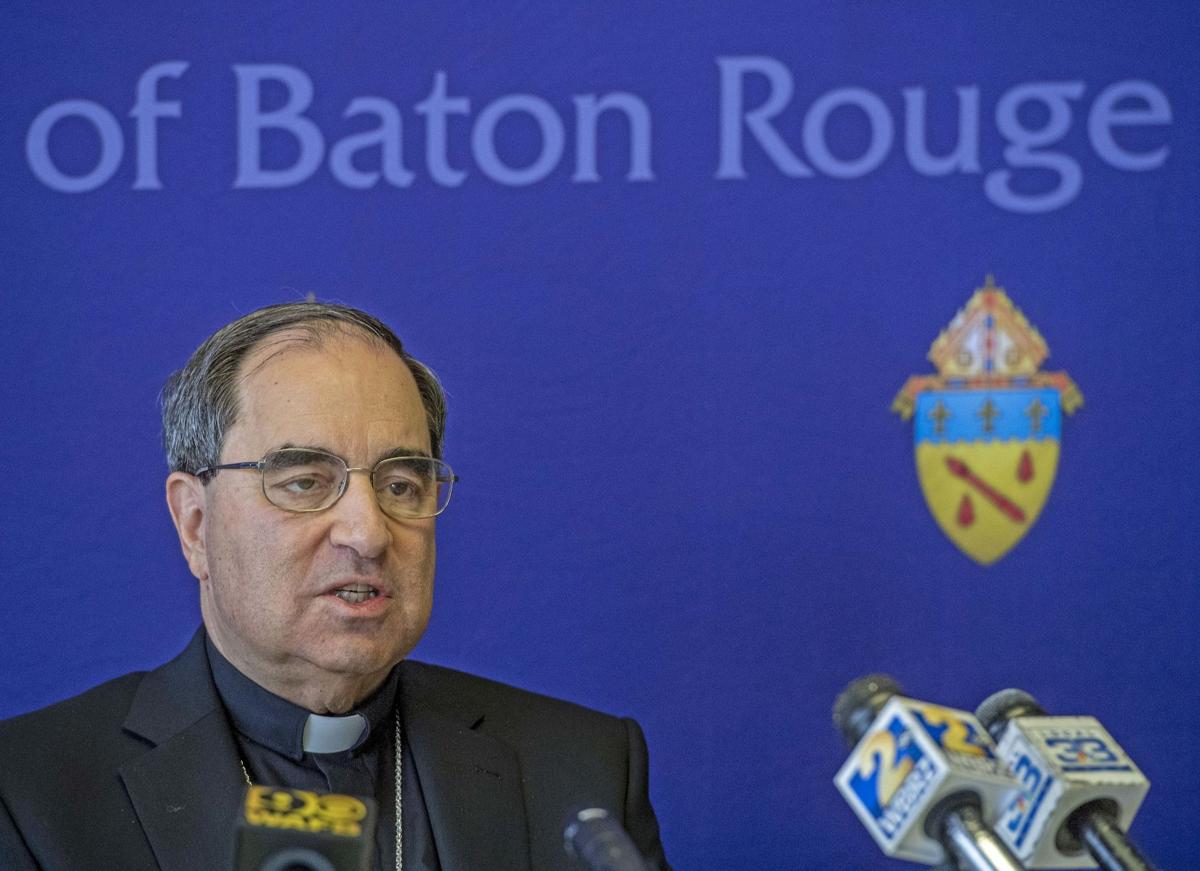 Baton Rouge Catholic Diocese Bishop Michael Duca talks about suggestions for temporary liturgical changes being made in the celebration of the Mass as a precaution against the Corona virus during a press conference Thursday March 5, 2020, in Baton Rouge, La. 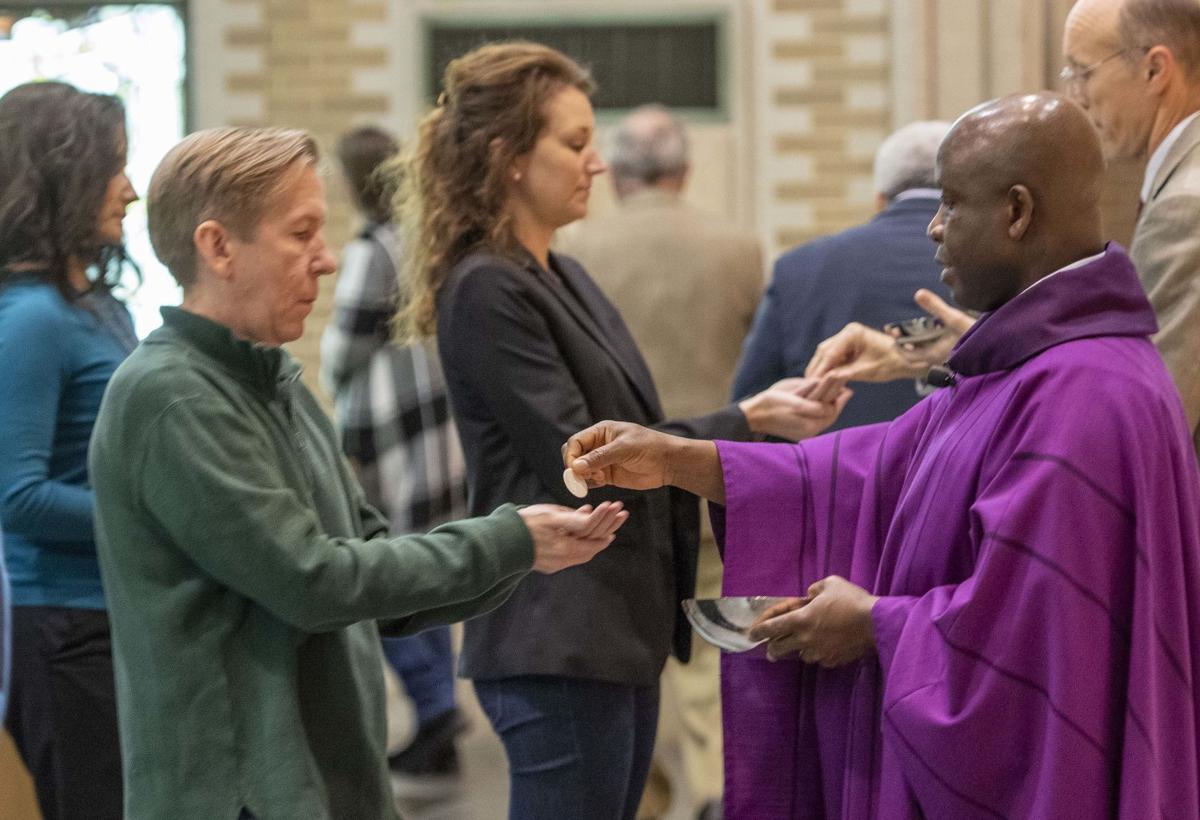 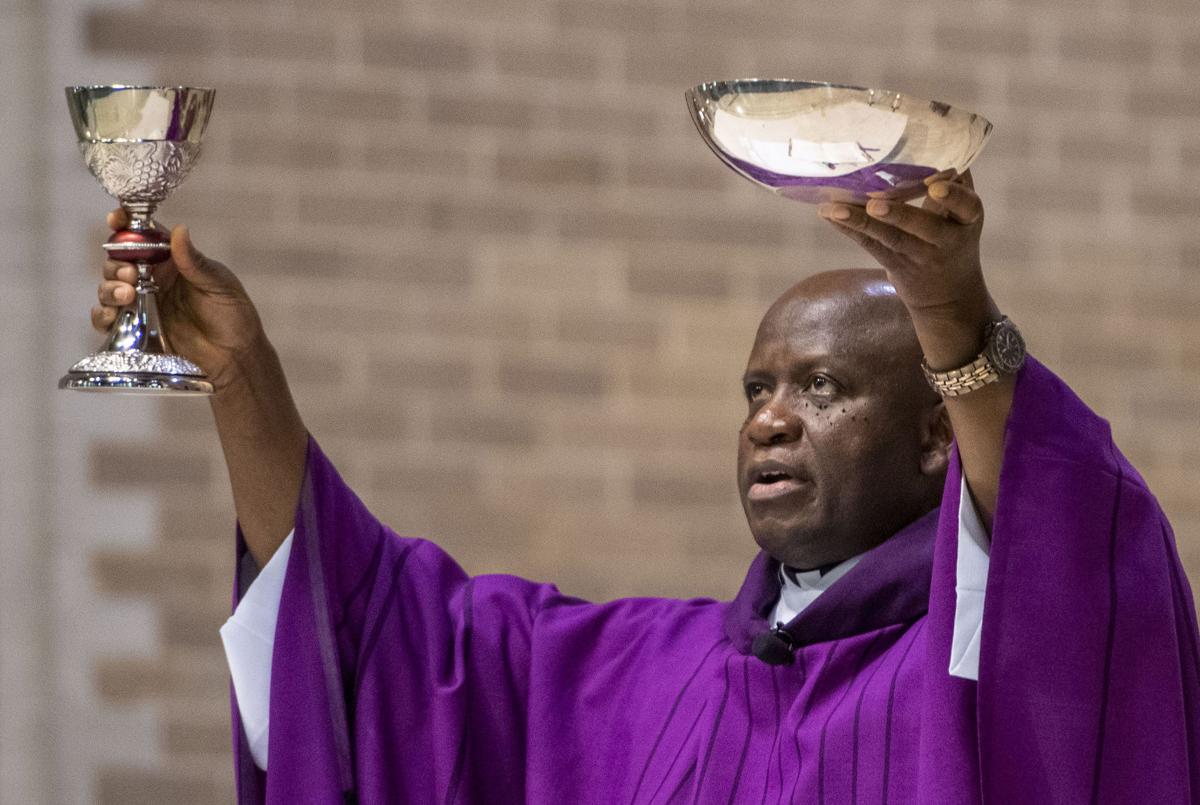 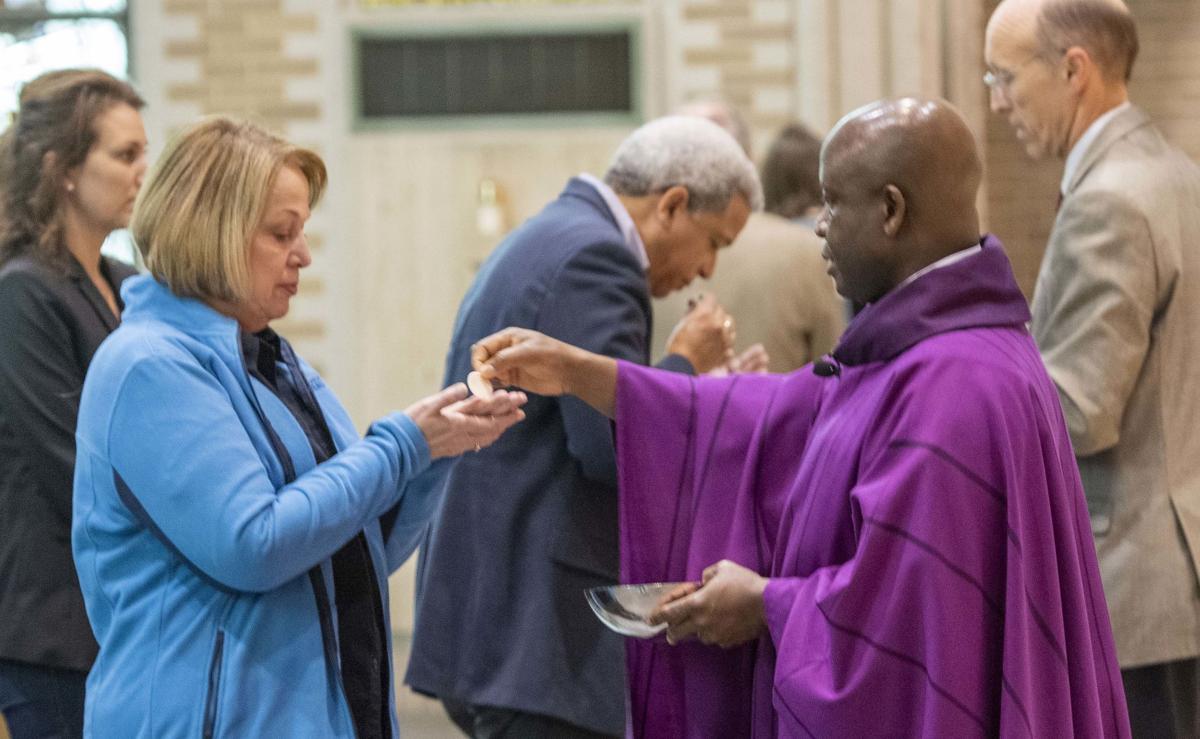 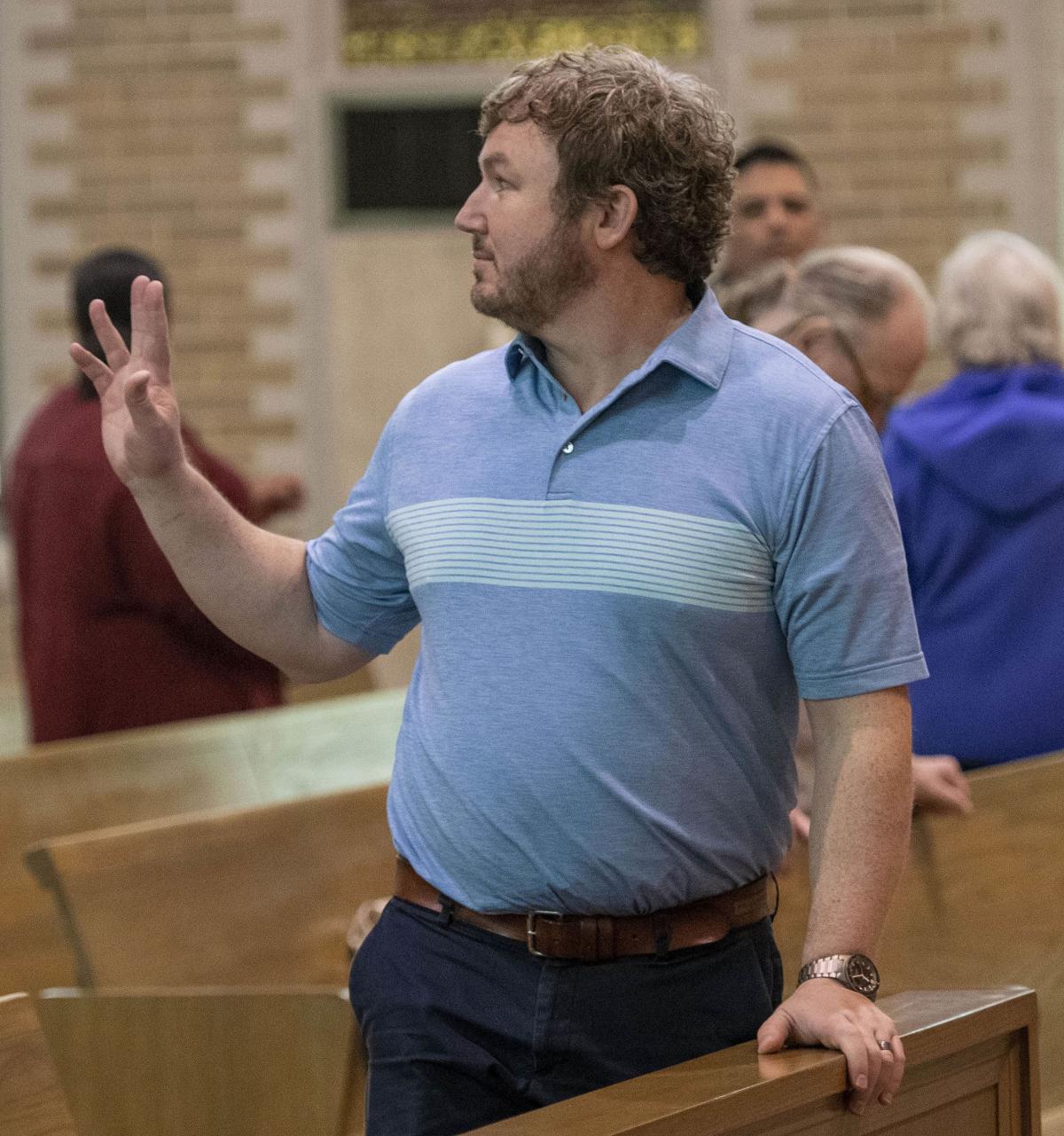 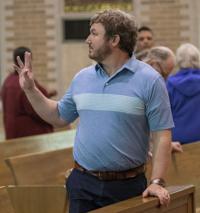 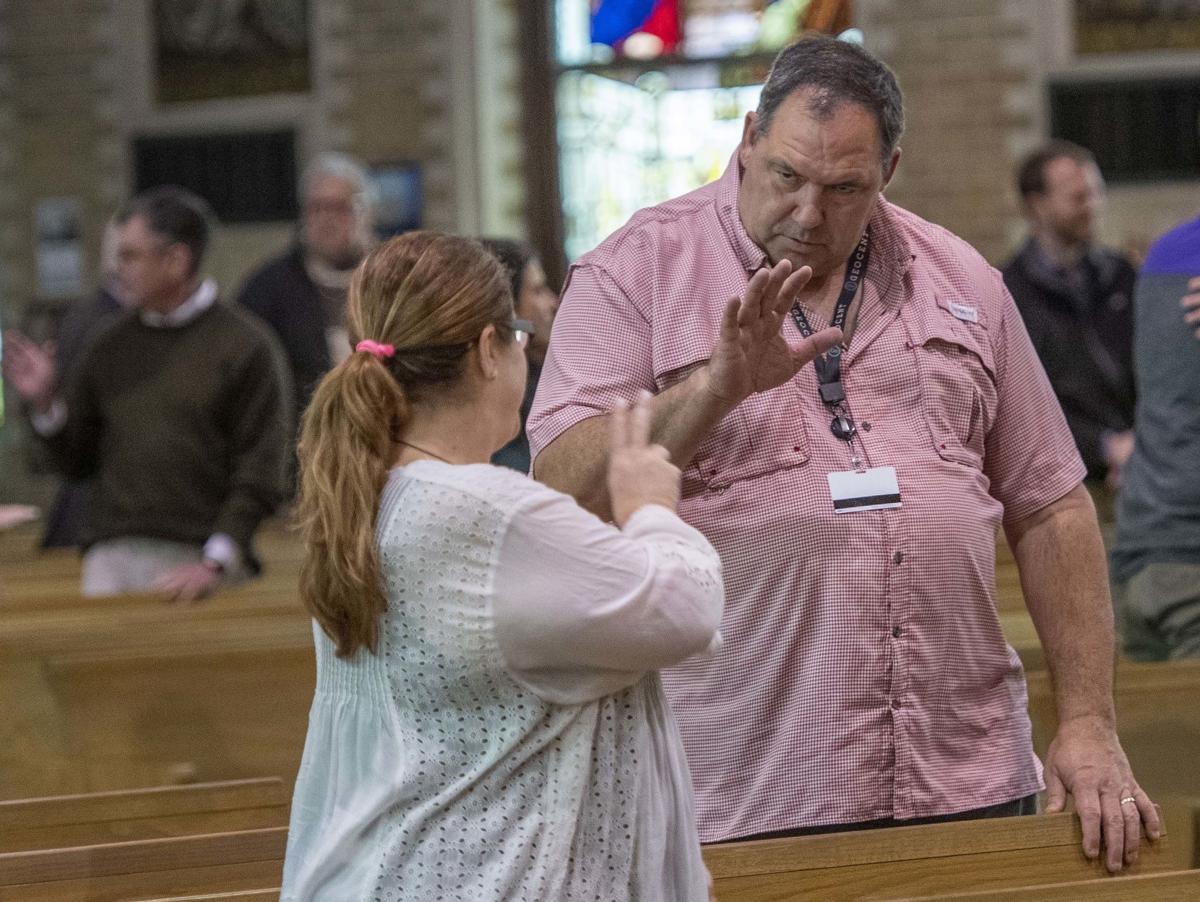 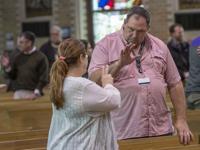 Baton Rouge Catholic Diocese Bishop Michael Duca talks about suggestions for temporary liturgical changes being made in the celebration of the Mass as a precaution against the Corona virus during a press conference Thursday March 5, 2020, in Baton Rouge, La.

Churches within the Diocese of Baton Rouge are among a rising number of houses of worship across the U.S. making changes in response to the coronavirus outbreak.

"Out of an abundance of caution, we have made some temporary changes in our liturgy to minimize the possible transmission of this virus," Bishop Michael Duca said at a press conference Thursday afternoon at the Catholic Life Center in Baton Rouge.

No positive cases of the coronavirus have been identified in Louisiana as of Thursday night.

The U.S. Conference of Catholic Bishops has left it up to individual bishops to decide if and how to implement certain steps it has suggested. Some dioceses said they would leave some decisions to the discretion of their parish priests.

Churches in the Baton Rouge diocese will discontinue offering the chalice containing consecrated wine during communion.

The Diocese of Baton Rouge announced several temporary changes to the Mass because of concerns about the coronavirus.

Duca also proposed other changes, including the request that churchgoers refrain from shaking hands during the Sign of Peace and avoid holding hands with other parishioners as they recite the Lord's Prayer. A nod, wave or bow will suffice as an appropriate sign of peace, he said.

"While we’re gathering in large numbers, especially during the season of Lent, we want to make sure our people are safe," Duca said.

He also encouraged Catholics to receive communion in their hands, rather than take the wafer on their tongues, though Duca emphasized this is purely optional.

By implementing these changes, Duca hopes to provide a safe environment for Catholics and to comfort older congregants who may be more susceptible to illness because of age.

"They'll be able to focus on the liturgy that they’re coming to celebrate, hear the word of God preached and to involve themselves fully in that mass that draws us together as a community," Duca said.

The bishop also implored others to pray for those around the world suffering from the coronavirus, particularly those who are deathly ill.

Coronavirus FAQs: See answers to who's at risk, when to get tested, pet safety, more

The new coronavirus continues to spread in the U.S., with 165 confirmed cases in 18 states and 11 deaths on the West Coast.

The virus outbreak has prompted changes in many other faiths as well, The Associated Press reported.

Several imams in the U.S. advised Muslim worshippers that it is religiously permissible to pray at home rather than attend Friday group prayers, which are generally considered obligatory for adult men.

After the prayers, Muslim congregants typically greet one another with hugs, handshakes and cheek kisses. Now, some mosque leaders are halting the custom of shaking the imam’s hand after prayer and are advising worshippers to find alternative greetings.

In the Seattle suburb of Bothell, leaders of the Hindu Temple and Cultural Center announced that the temple will no longer accommodate worship services or other large gatherings until a statewide state of emergency is lifted. It said the temple would be open to individual worshippers for an hour each evening, and some events would be open only to priests.

Concerns about the virus have prompted two leading pastors of Life.Church to voluntarily place themselves in quarantine at their homes in the Oklahoma City area.

Sally Hiller, a Virginia-based deaconess with Lutheran Church Missouri Synod, suggested to regional colleagues that churches should have a communication system in place to spread the word if services are canceled or church-run schools are closed. She said plans should be in place to offer online classes.

Not everyone is taking drastic steps.

At the Church of the Redeemer, an Anglican congregation in Nashville, Tennessee, pastor Thomas McKenzie advised churchgoers that he plans to continue offering wine during Communion, with the chalice being carefully wiped by a cloth between each use.

He also indicated his church would continue to hold services even if the outbreak worsens.

“Please know that we will worship on Sunday morning no matter what,” he wrote. “Some other church events might be canceled — as we sometimes do in bad weather — at the request of local authorities. However, we Anglicans have long continued to worship even in the face of bombs, persecutions, earthquakes, fires, floods and, yes, disease.”

In Baton Rouge, Duca reiterated what he called "common sense" measures, urging parishioners who get sick to stay home from Mass. He underscored the fact that avoiding church while ill is not considered a sin and noted the celebration of Sunday Mass is available to view at various times throughout the day on Channel 15, the diocese's television station.

“Get well, then come back to church,” he said.

LSU leaders said Friday all planned international study abroad programs will be canceled through Aug. 17 because of worries about the novel co…