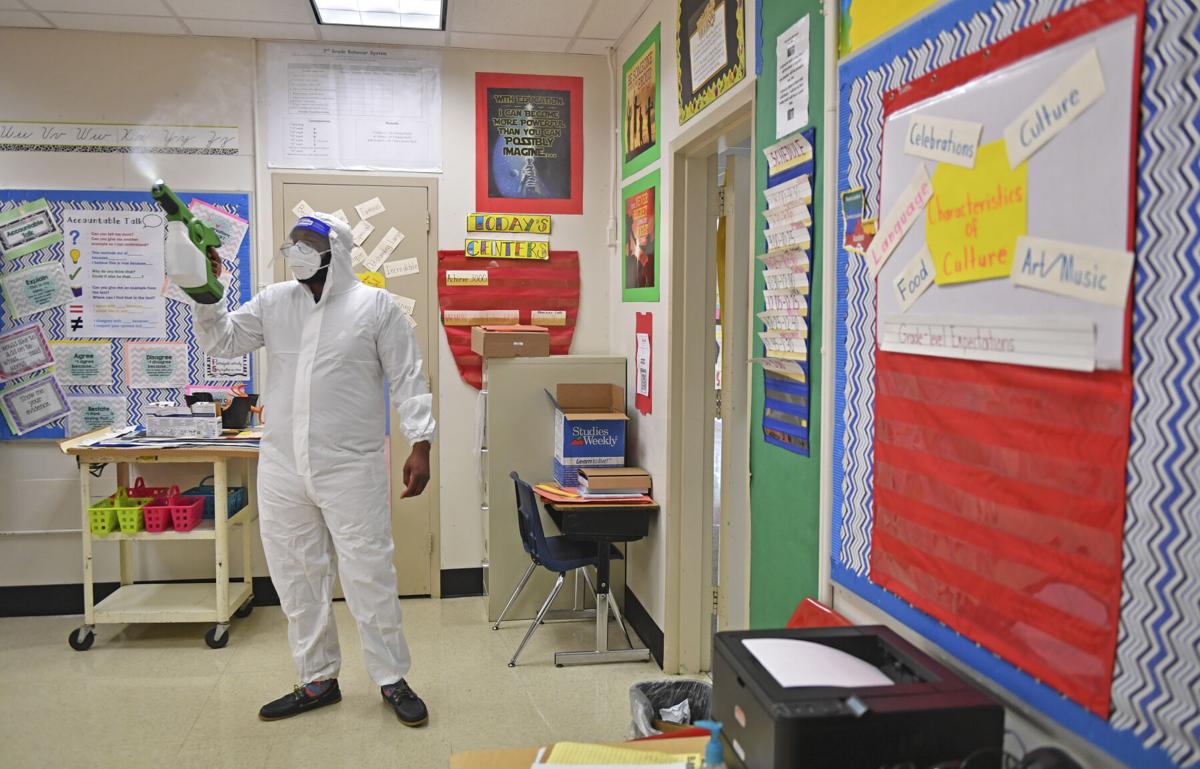 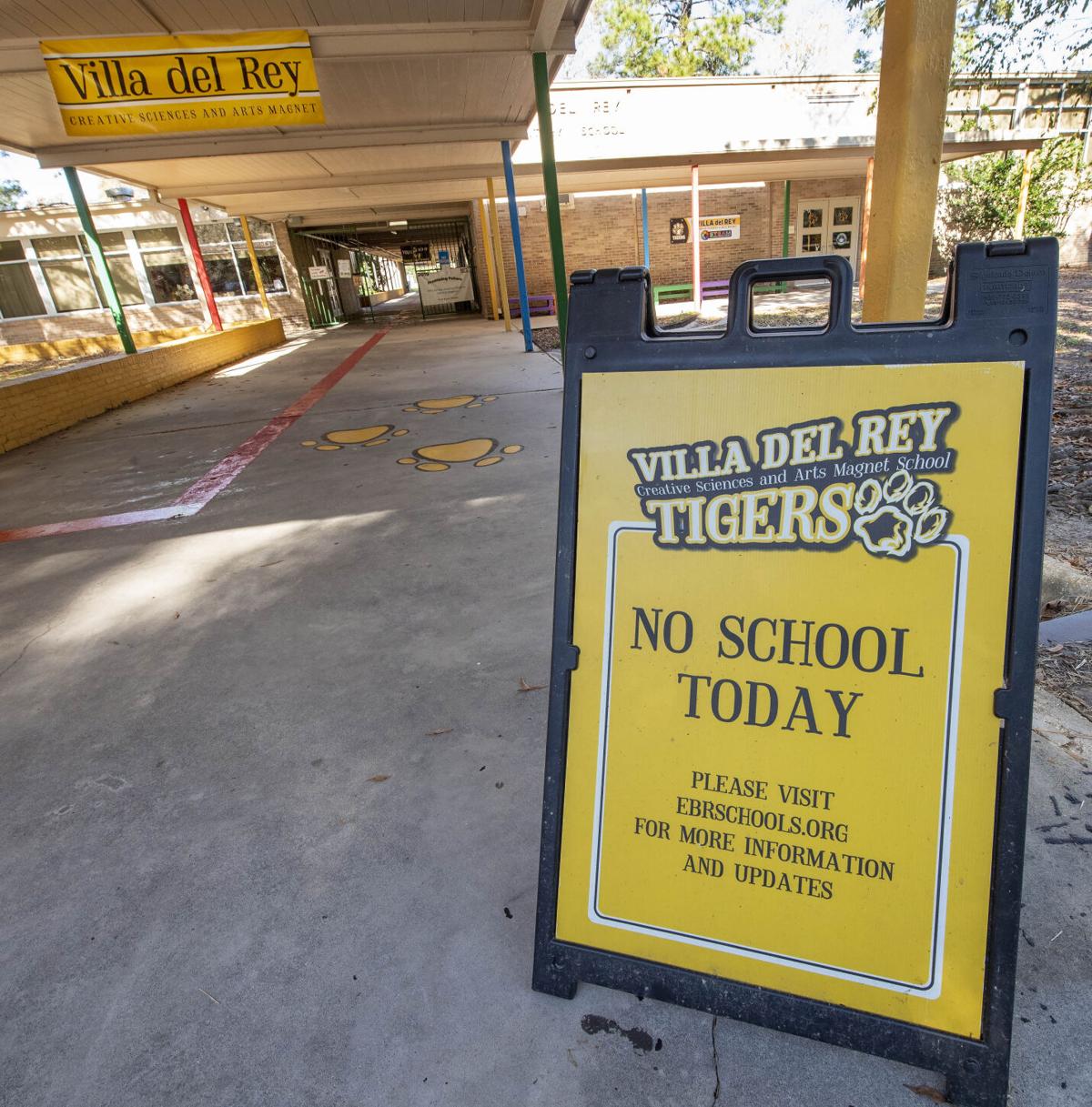 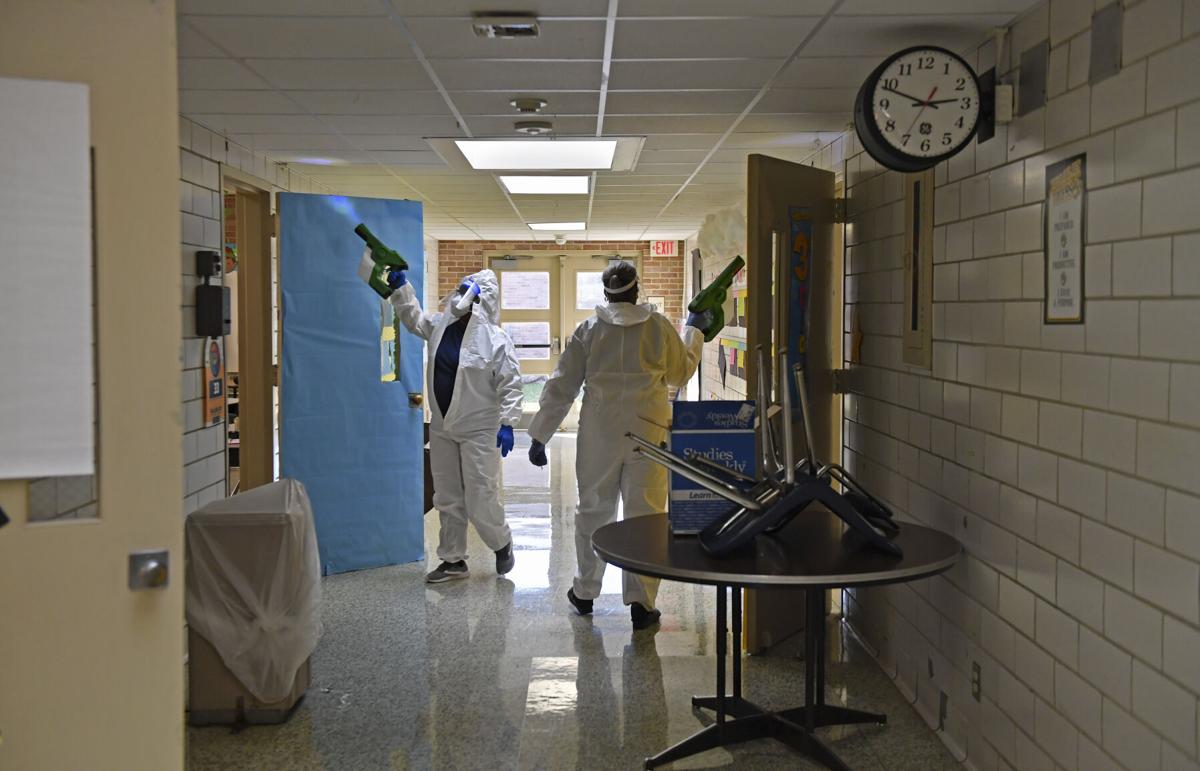 A pair of subcontractors with Aramark spray a disinfectant in a classroom hallway at Villa del Rey Creative Sciences and Arts Magnet Wednesday afternoon, December 9, 2020, in Baton Rouge, La. 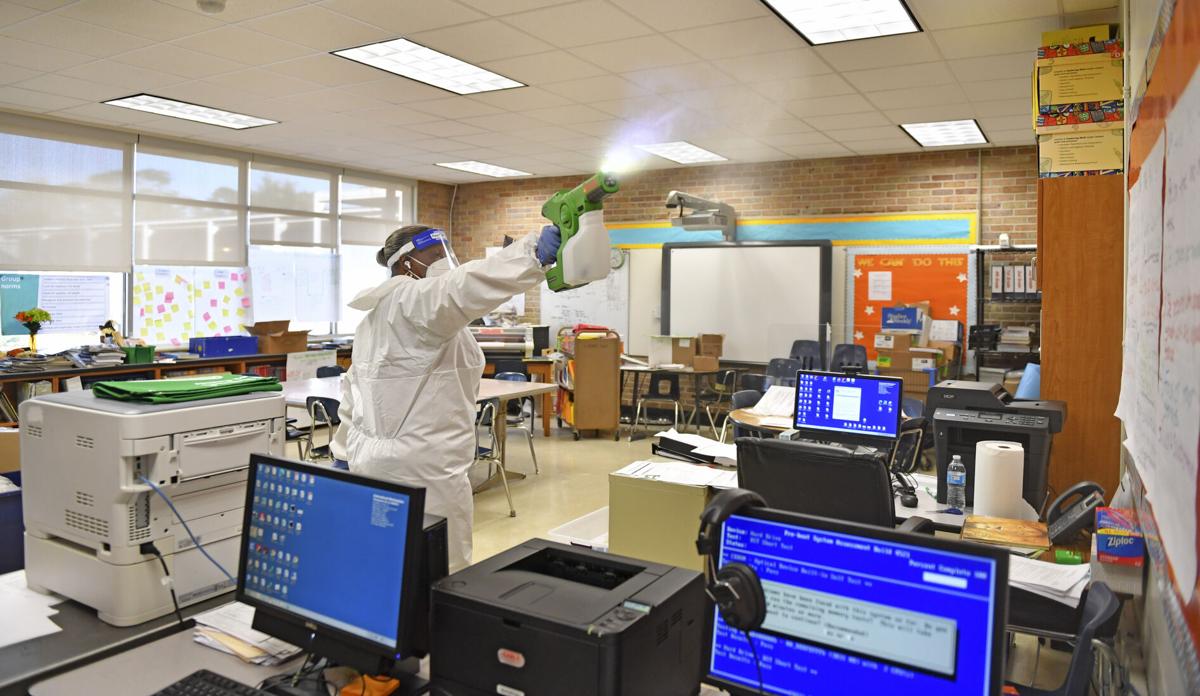 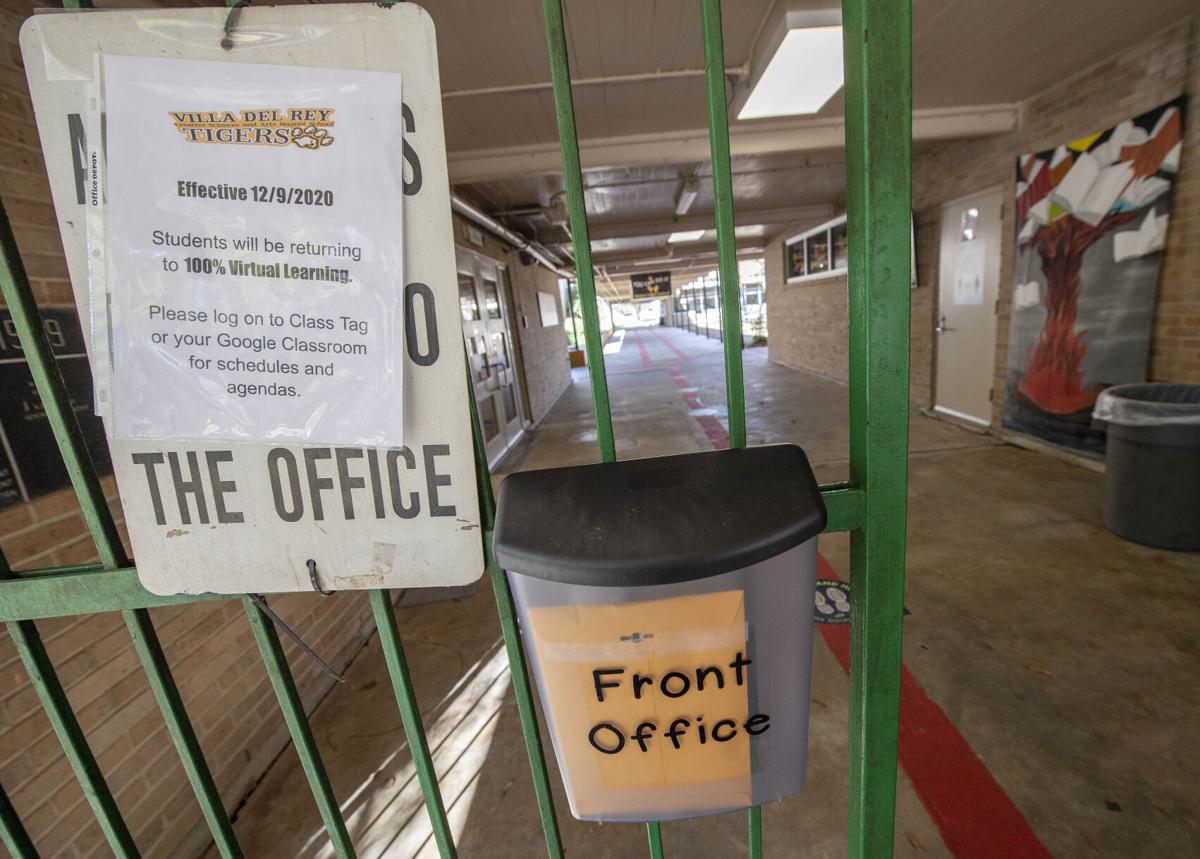 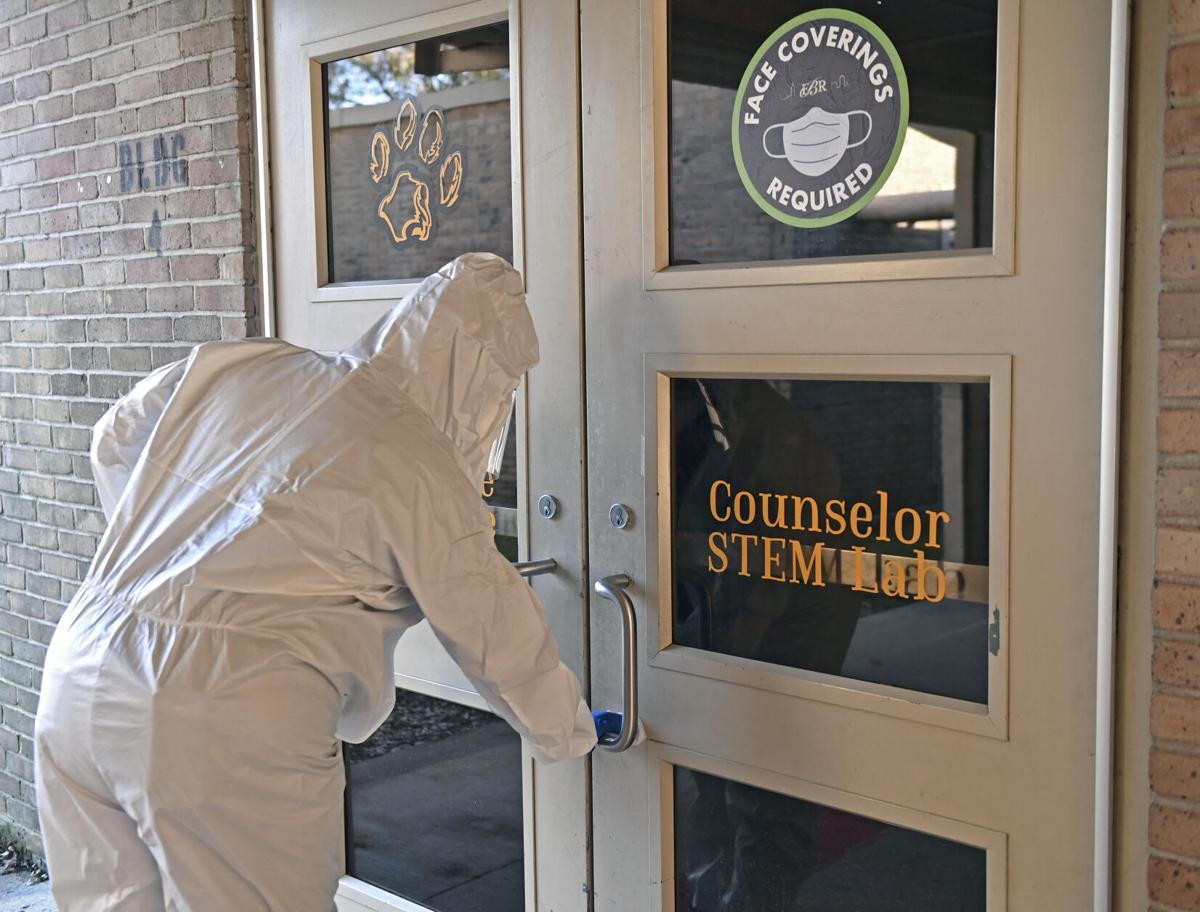 A pair of subcontractors with Aramark spray a disinfectant in a classroom hallway at Villa del Rey Creative Sciences and Arts Magnet Wednesday afternoon, December 9, 2020, in Baton Rouge, La.

A handful of schools in the Baton Rouge area are once again closing their doors and sending children home to learn remotely as the novel coronavirus surges through the local community and finds its way into more and more campuses.

It’s reminiscent of what happened in the days leading up to the Thanksgiving break — but now, before Christmas, the numbers are looking worse.

The latest state health data shows new coronavirus cases continue to trend upward in the Baton Rouge area toward summer-time peaks after a brief dip in testing during Thanksgiving. Deaths from the COVID-19 illness are also inching upward but remain well below the highs from the spring.

The data covers the seven-day period ended Dec. 2 and includes the holiday break.

On Monday, a charter school in Baton Rouge, IDEA Innovation, closed its doors, as did an upper elementary school in Greensburg, the St. Helena Parish Arts and Technology Academy. IDEA Innovation plans to reopen for in-person instruction after a week, while the St. Helena school plans to stay virtual-only until January, when the second semester begins.

Villa del Rey Elementary in Baton Rouge joined them on Wednesday, opting to stay virtual for the final eight days of the semester and reopening in January.

At McKinley Middle School in Baton Rouge, the seventh-grade is going virtual-only for the rest of the fall semester, while sixth and eighth-graders will stay on campus.

At least one other charter school in Baton Rouge, Inspire Charter Academy, has been virtual-only since mid-November.

Catholic schools in the Baton Rouge area have yet to shift online.

“At this time we know of no schools planning to go virtual for the remainder of the semester,” said Dan Borné, a spokesman for the Diocese of Baton Rouge.

With coronavirus cases at schools continuing to rise, more Baton Rouge area schools are going all-virtual or closing early this week to try to…

The school closures have as much to do with what’s happening in the surrounding community as what’s happening on campus. Villa del Rey, for instance, could have stayed open if not for staff exposure outside of work, said Taylor Gast, a spokeswoman for the East Baton Rouge Parish school system.

"A good portion of staff did not return after Thanksgiving due to unrelated contact tracing/quarantine impacts, making school operations difficult," Gast said.

East Baton Rouge Parish on Tuesday broke 20,000 coronaviruses cases since the pandemic began in March. On Wednesday it added another 203 cases for a total of 20,218.

The 12-parish Baton Rouge region approached 49,000 total cases after adding more than 850 on Wednesday. Ascension, Livingston and Tangipahoa parishes all added triple-digit new cases for the first time since Dec. 1 and were either approaching or had exceeded 6,000 total cases since the pandemic began.

The latest sign of the impact of the pandemic was St. James Parish government canceling its annual Christmas Eve bonfire celebration. The decision, handed down Wednesday, came even as some participants had already started setting up their wooden structures on the Mississippi River levee.

Meanwhile, positivity rates continue to rise across the region and the state.

East Baton Rouge Parish broke 10% positivity for the first time since mid-August, state health data show. Indeed, 10 of 12 parishes in the region topped that threshold with an 11th, Assumption Parish, just on the cusp at 9.9%. Statewide, more than three-quarters of the parishes in Louisiana — 49 of 64 — had weekly positivity rates of 10% or greater.

Positivity rate is a ratio that shows the share of positive cases for a given batch of tests.

Rising rates, especially at double-digit levels, can be a critical signal that spread of the virus is headed toward concerning levels, but rising rates can also mean the penetration of testing is slipping when test numbers are on the decline.

City-parish health officials have said they expected a rise in positivity rates during Thanksgiving because of less testing at LSU, where testing has been more widespread than other testing efforts in the community and had tended to contribute plenty of negative tests.

Last week was also the worst week yet in terms of cases of the virus in K-12 schools, according to the latest statewide report. The report, also released Wednesday, covers cases reported through Sunday. Nearly 2,200 staff and students reported testing positive that week, 48% more than the week before Thanksgiving, the previous peak.

Schools in St. Tammany Parish, both public and private, added the most new cases, 251 in all. Ascension, East Baton Rouge and Livingston parishes ranked fifth through seventh in terms of new cases, adding 143, 132 and 131, respectively.

Most of the smaller parishes in the Baton Rouge region have reported relatively few cases so far this school year, but that can change quickly.

St. Helena reported its first two cases in mid-October. Last week it increased from about 10 cases to more than 50. The new cases were found during free COVID testing for all its students as they returned from Thanksgiving break. The testing was conducted by Southeast Community Health System.

Over three successive days last week, 42 students tested positive for the virus. All but four of those students attend St. Helena Parish Arts and Technology Academy, a school with more than 300 students in grades three to six.

Those positive tests led to another 72 students going into quarantine. The combination of positive tests and quarantines prompted the decision to move the school fully online through Christmas. The district’s other two schools, a high school and an early learning center, have stayed open.

Superintendent Kelli Joseph said she’s not sure why that one school had so many cases, but the other two did not.

Gov. John Bel Edwards pledged Tuesday the state would administer all 79,000 doses of the first batch of vaccines in Louisiana within 48 hours …