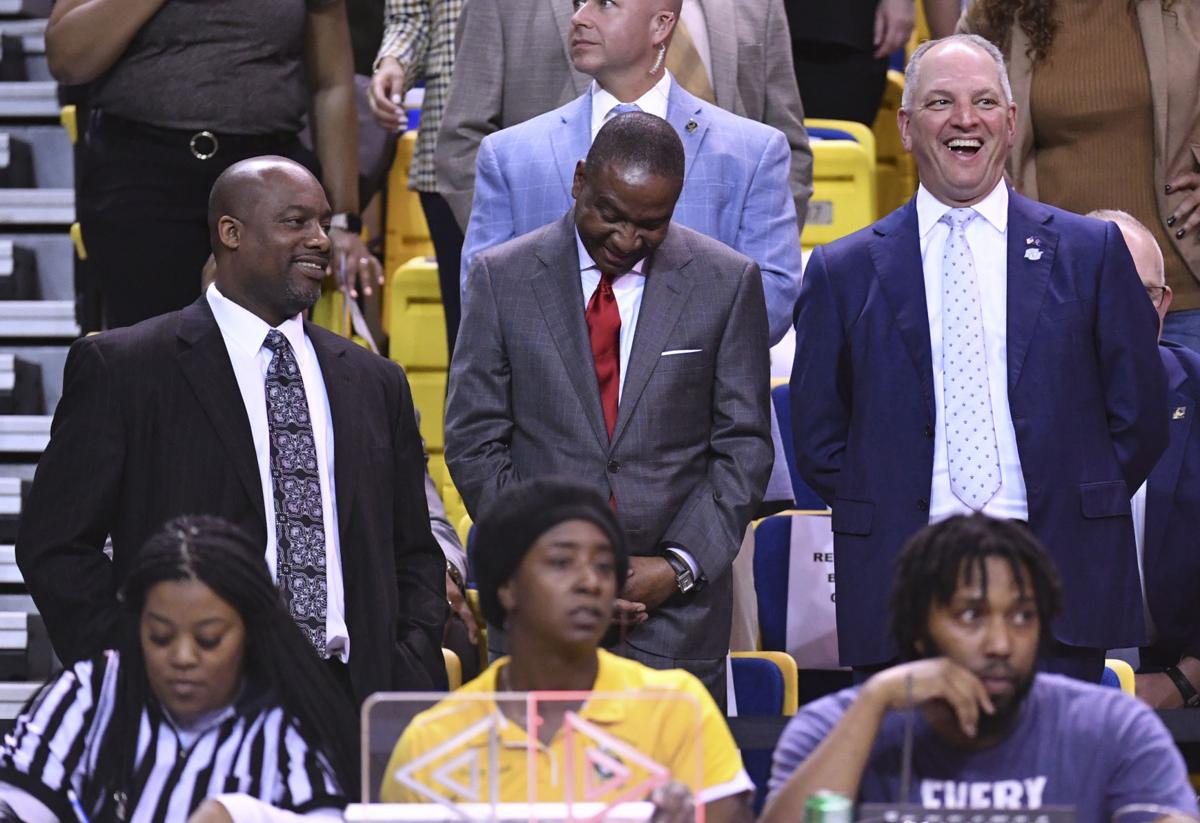 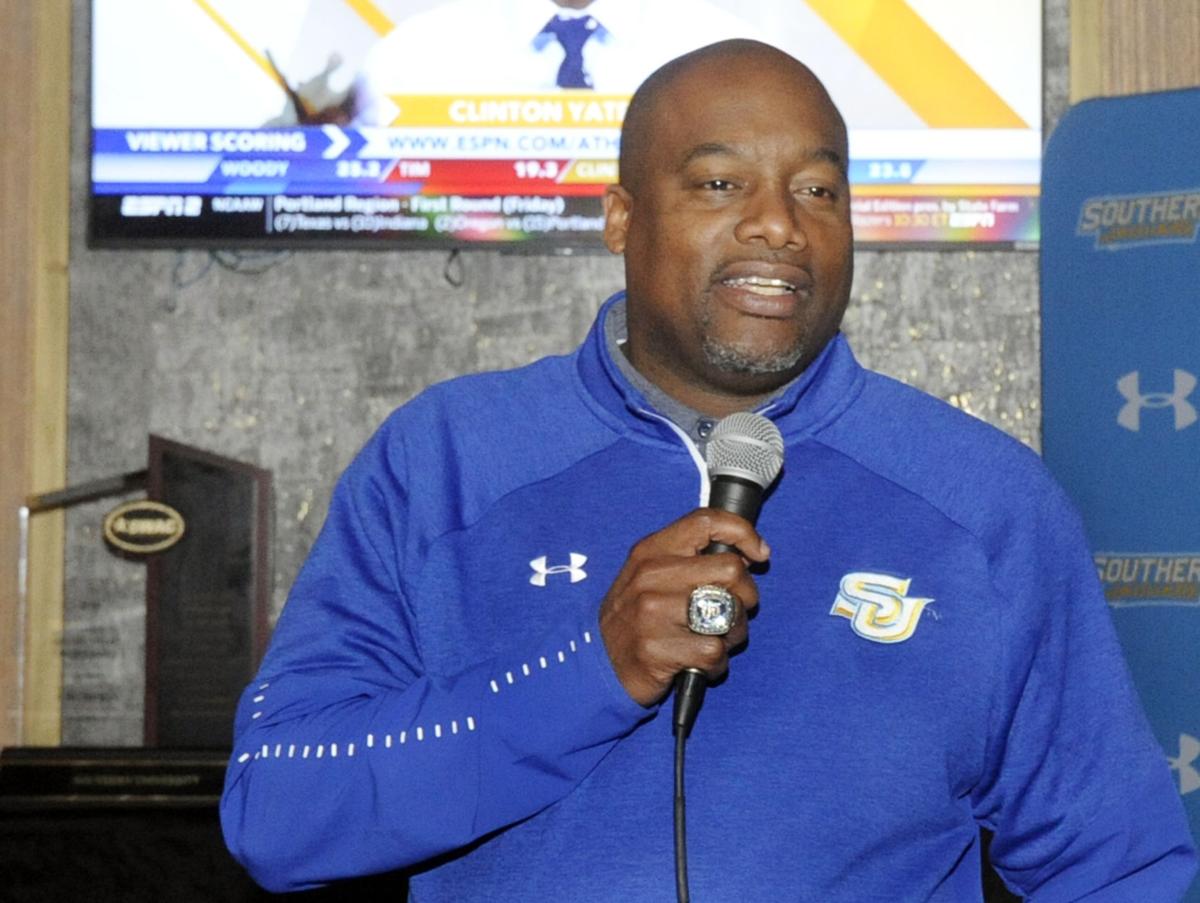 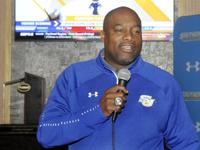 With state and national attention focused on flattening the curve of the novel coronavirus since mid-March, the job for Southern athletic director Roman Banks and others at mid-major colleges has remained under the radar.

Yes, crushing the pandemic curve is a great thing. But the task for Banks is a fundamental one — make sure SU athletics can weather losses caused by the pandemic and be prepared to survive other possible blows.

All while keeping the well-being of Jaguar student-athletes front and center.

“It is important for people to understand how fluid the situation is and that there are a lot of scenarios still in play,” Banks said. “There is no concrete scenario because right now, we have no concrete answers.

“As much as I love sports and as much as we need sports, knowing it is a healing place for our society, you have to remember these are amateur athletes … young kids. I don’t want to risk the health of anybody — athletes, coaches or staff.”

Most days, Banks sits alone in his office, but he is never idle. There is a steady stream of calls and Zoom meetings with athletic administrators, coaches and Southwestern Athletic Conference officials.

This week is huge academically, because all Southern students, including athletes, are taking final exams. After several years of NCAA academic probation, Southern is in good standing in all sports in terms of its Academic Progress Rate and staying that way is a priority.

When Southern switched to online learning, the athletic department shifted its tutoring and athletic support online. There are Zoom study halls. As exams go on, Banks also works on budgeting for 2020-21 and locking in multiple plans for what happens next.

With two signees and a large returning cast, SU women anxious to see what 2020-21 season brings

There was no happy ending for the Southern women’s basketball team. But Carlos Funchess is eager to see what the 2020-21 season might bring.

To say it’s complicated is an understatement.

Banks said the loss of the basketball postseason and spring sports seasons leaves a deficit of around $1 million.

If college campuses are shuttered in the fall, Southern could face an additional $5 million to $6 million deficit. And if the Jaguars cannot play their first two nonconference football games with Tennessee State in Detroit and Florida A&M at home, Banks said a possible $750,000 could evaporate.

“As you know, our board just approved tuition rates,” he said. “Our budget is based on fall, spring and summer.

“There was $300,000 to $500,000 we were budgeted to get from school fees, but because our classes went online, we won’t get all of that,” Banks said. “Obviously, we don’t know about the fall. We are considered a low (financial) resource institution by the NCAA, so we have to manage ourselves a little different.

“A couple of Power 5 conferences who have the money and can throw a half a million dollars at this thing are talking about putting both teams in hotels and then monitoring players by taking temperatures.

“Then they would play football in front of no fans and make money — millions — off TV rights. That’s not an option for schools on our level.”

Like many coaches, Southern University men’s basketball coach Sean Woods is left to ponder what might have been. The Jaguars won 14 of their f…

Shock waves reverberated last week when multiple colleges, including larger schools such as Boise State and Louisville, made sweeping staff cuts in the wake of the pandemic.

Some coaches and staffers were laid off; others were furloughed. Other colleges made swift moves to drop non-revenue sports.

Banks is working on ways to keep Southern from landing in the same boat.

“The first thing we are going to do is make other cuts,” Banks said. “The last thing we want to do is cut staff. What we will have to do is cut travel and services first. And recruiting and equipment budgets.

“If we can make enough cuts in those areas and others, like for example what we do with football game day, my hope is this — we should be able to keep a quality number of staff and student scholarships.”

There is one cost-cutting shift the SWAC has worked with its schools — scheduling the minimum number of games and events allowed by the NCAA in multiple sports for 2020-21.

Could fall be spring?

The debate about when college sports seasons can begin has been raging for weeks. Like others, Banks has no answers.

But he said the SWAC is discussing possible alternatives, depending on when fall seasons could start and if a second COVID-19 outbreak prompts a fall delay.

“Our commissioner (Charles McClelland) is very progressive and we have been discussing several ideas and have subcommittees working on several things,” Banks said. “College athletics is not a one-size-fits-all and we have to do what fits us best.

"I do believe that with our football reputation, if you look at our attendance versus other conferences on our level like the Southland, we can put together an aggressive plan.”

If classes begin and football starts by Oct. 1, Banks said the SWAC sees a seven-game conference schedule with a championship game.

Should the fall start date be pushed back to late October or November, pushing football to the spring would make sense, because it is a key revenue sport.

“I want to say this correctly: The survival of revenue sports, which on this campus is football and basketball, would be your starting point,” Banks said. “For this one year (2020-21) we might not be able to do it all. You would need to simplify the other sports with reduced schedules.”

If the pandemic makes fall sports impossible, Banks concedes that seasons for volleyball, women’s soccer and cross country would be lost. Should football start in the spring, basketball and spring sports would be worked into a complex schedule as the months go on.

“Some sports, like baseball, could play into the summer,” Banks said. “The (SWAC) schools would vote on the limits.”

Since the pandemic shut down Southern's campus in March, Banks said there has been a deep cleaning of all facilities, including those used by the athletic department.

Banks ponders what a game-day situation would look like. Could portable restrooms become a monitoring station? How many hand sanitizer stations would be needed at each facility? How will concession stands prepare and serve food?

And how would cleaning of locker rooms, weight rooms, the training room and other areas change?

“I’ve got staff looking at videos that show how different products work to clean and sterilize,” Banks said. “Obviously, this is not a question of should it be done, it is a must now. In some ways, this COVID-19 situation will be like starting over.”

Rabalais: Marino Casem was a winner, a (God)fatherly figure and one amazing football man

There is a photograph of Marino Casem in The Advocate’s archives, black and white and grainy. By today’s digital standards, it would be quickl…

A pair of Southern football games have been canceled because of the novel coronavirus, according to two reports, but athletic director Roman B…