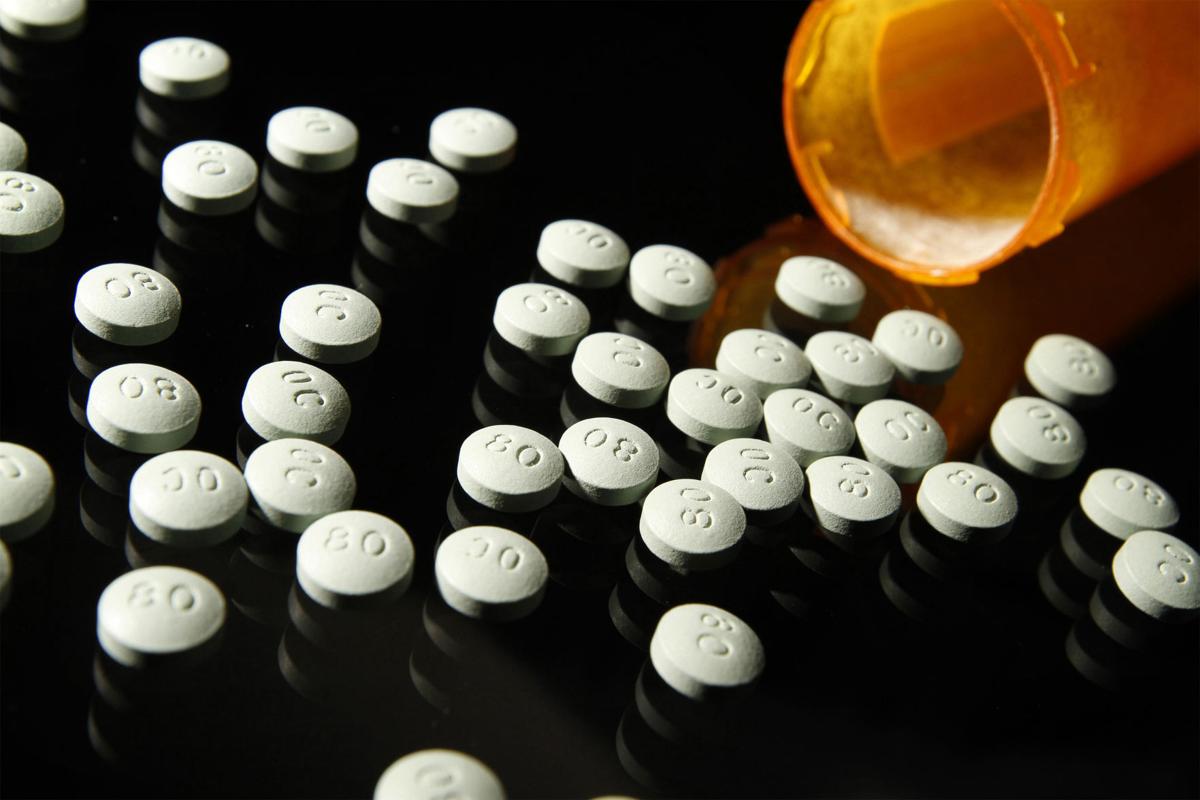 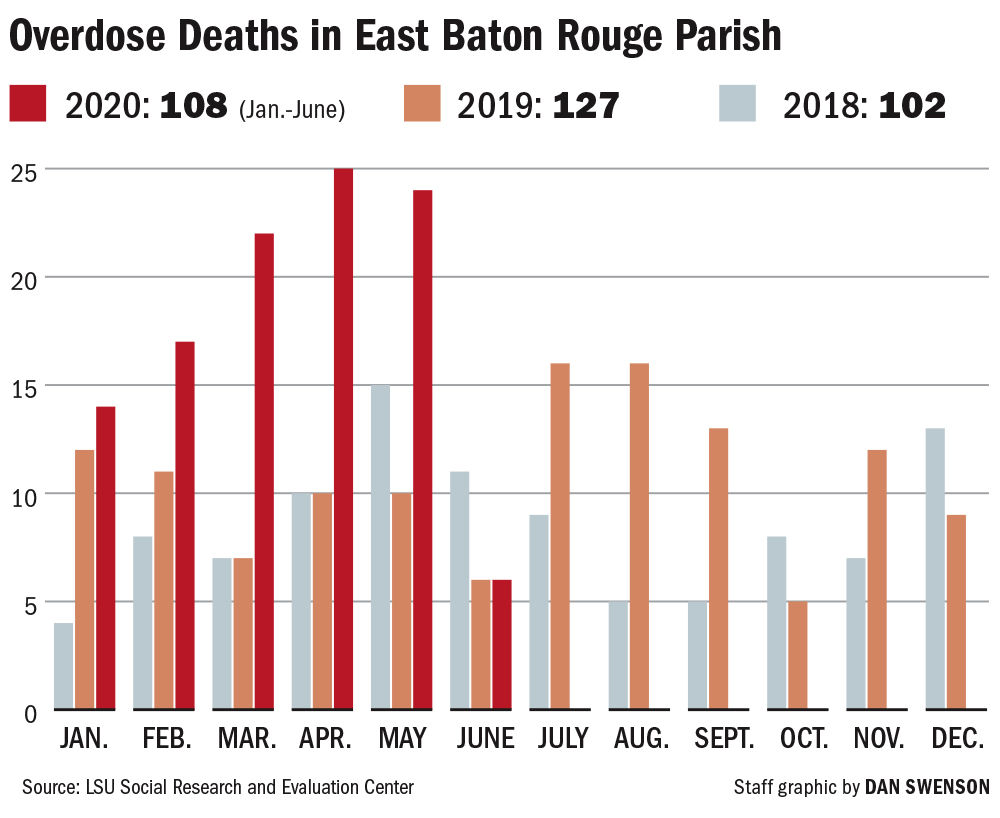 Officials have seen an unprecedented spike in overdose deaths since the coronavirus pandemic began. Mid-way through the year, 2020 overdose deaths are on pace to eclipse 2019’s record year.

At the outset of the coronavirus pandemic, no one knew if drug overdose deaths would increase or decrease.

"We were really unsure about what was going to happen," said East Baton Rouge District Attorney Hillar Moore III. "We thought maybe (drug overdoses) would slow down because people who are at risk may be more at home, giving them more support."

But after a record-setting year in 2019 that saw 127 people die of drug overdoses in East Baton Rouge Parish, 2020 is quickly on pace to eclipse that death count, confirming public officials' worst fears.

As of June, 108 people in the parish have died of overdoses this year, according to LSU Social Research and Evaluation Center data. This represents an increase of almost 93% from last year's overdose deaths at the same time period.

"This should not be happening," Moore said. "These numbers are alarming. This is a major health problem."

When the virus began to ramp up in March, addiction service providers adjusted, pausing in-person interactions and switching to telehealth options to support their patients.

Nevertheless, the pandemic sidelined people who had been on a disciplined regime as they went through recovery and treatment.

"Your ability to go to the meetings you needed, go to the treatment that you needed to get — it really put an abrupt stop to a lot of the service providers that people with these addictions were relying upon to kind of stay afloat," said Assistant District Attorney Steve Danielson.

He noted a combination of serious relapse issues due to these services shutting down, along with isolation, depression and other mental health triggers, coalesced to create a catastrophic situation for those struggling with drug addiction.

And for some people who have been in treatment, if they return to their drug of choice at the same dosage they were using prior to treatment, that amount may prove fatal, Danielson said.

Overdose deaths in East Baton Rouge Parish in 2019 hit the highest number recorded, a worrying pattern that has galvanized officials as they s…

Janzlean Laughinghouse, interim executive director for addiction recovery services at Capital Area Human Services, said she realized early on in the pandemic that this might become a problem.

"The issue is that when we’re talking about a disease that you treat biologically, psychologically, socially and spiritually," she said. "And when we have to distance ourselves for our physical health, our mental health suffers. That is a dangerous situation for people in recovery."

Her organization worked to return to face-to-face interactions as quickly as possible as the state began to reopen after the lockdown — all while maintaining safety precautions. In the meantime, Laughinghouse said, it was "sobering" to write critical incident reports and death notifications for so many people who had been trying to tackle their addiction.

"There are people that we serve who were alive … in April, who are not alive now. And it’s heart-wrenching."

On a sweltering Sunday morning in June, a small group of people gathered beside a pond behind the WoodSpring Suites motel on Airline Highway.

Many of the people who huddled under the shade of a tent were formerly homeless and had transitioned into temporary housing by the Louisiana Housing Corporation amid the pandemic. Others were social workers or volunteers.

They had arrived, fanning themselves in the muggy heat, to honor the memory of Mark Plummer, a formerly homeless man who died of an accidental fentanyl overdose on June 10, according to the East Baton Rouge Coroner's Office.

Plummer's death underscores another pattern that concerns officials and addiction service providers: Ninety-six of the 107 deaths through June 2020 involved opioids.

Fentanyl, a Schedule II prescription drug typically used to treat patients with severe or chronic pain, appears to be the drug of choice for many users who are overdosing, Moore said.

When parish Coroner Dr. William "Beau" Clark reflected earlier this year on 2019's startling numbers, he pointed out that while heroin overdose deaths in the parish have stabilized, deaths where heroin and fentanyl were combined have continued to increase.

This use, which creates a "compounding effect," was a major trend in 2019.

Plummer, 54, told The Advocate in the weeks before his death that he had been homeless for a little more than 10 years after an accident on an oil rig left him injured. He was the patriarch and founder of an encampment in a quiet patch of forest bordering what is now Havertys furniture store.

When Baton Rouge cleared out two homeless encampments in mid-May, they said the move was a precaution to fight the potential spread of the cor…

The encampment was recently demolished after most of its residents moved to the motels. Bob Minor, 51, who used to live at the camp, said Plummer wasn't quite the same after his home was cleared away. In the weeks before his death he had taken to traveling back and forth between the motel and the former campsite to tend to his cats, which remained behind.

"I know he had really big demons in his closet," Minor said. "But he's always helped people out, even if he knew that he was getting screwed. That's just the way he was."

Ed Doyle, leader of a street ministry called Church Under a Tree, stood in the center of the tent to preside over the memorial. He had known Plummer for some time throughout the course of his ministry and was visibly shaken by the loss.

"If Mark had a possession that you needed, he would go without to give it to you," Doyle said. "Mark Plummer was a builder."

One of the key slogans counselors tell people struggling with addiction, Laughinghouse says, is: "Stay connected to stay protected."

But with the coronavirus lockdown, that became difficult.

"Boredom is a big trigger for folks," Laughinghouse said. "You’re talking about a perfect storm."

People who use drugs are more vulnerable to coronavirus. Here's what clinics are doing to help.

Health experts warn that people who use drugs are particularly vulnerable to COVID-19, the deadly disease caused by the coronavirus.

As the pandemic's unexpected fallout has continued, Moore's team is urging families, friends and coworkers to try to support those in their lives fighting addiction.

"We just want the community to know that this is not just any particular neighborhood, or demographic — it is all over the parish," Moore said. "If anyone is experiencing trouble, try to get that person help and try to get some type of intervention as soon as they can."

Through the East Baton Rouge Innovative Prosecution Solutions Project, Moore also hopes to raise awareness of those at risk for drug addiction while he finds a way to effectively prosecute drug dealers and cut off their networks.

"We track all of those that have been arrested for heroin distribution," Moore said. "We pay special attention to those individuals. Not the users, but the dealers."

His office is also reaching out to the Louisiana Department of Health to better understand whether this trend has spread across the state.

"This is a major health problem we're seeing in Baton Rouge, and I'm sure it's (affecting) other cities in our state," Moore said. "For us, the numbers are just alarming."

Coronavirus in Louisiana: Nearly 80,000 cases diagnosed in Louisiana; hospitalizations up