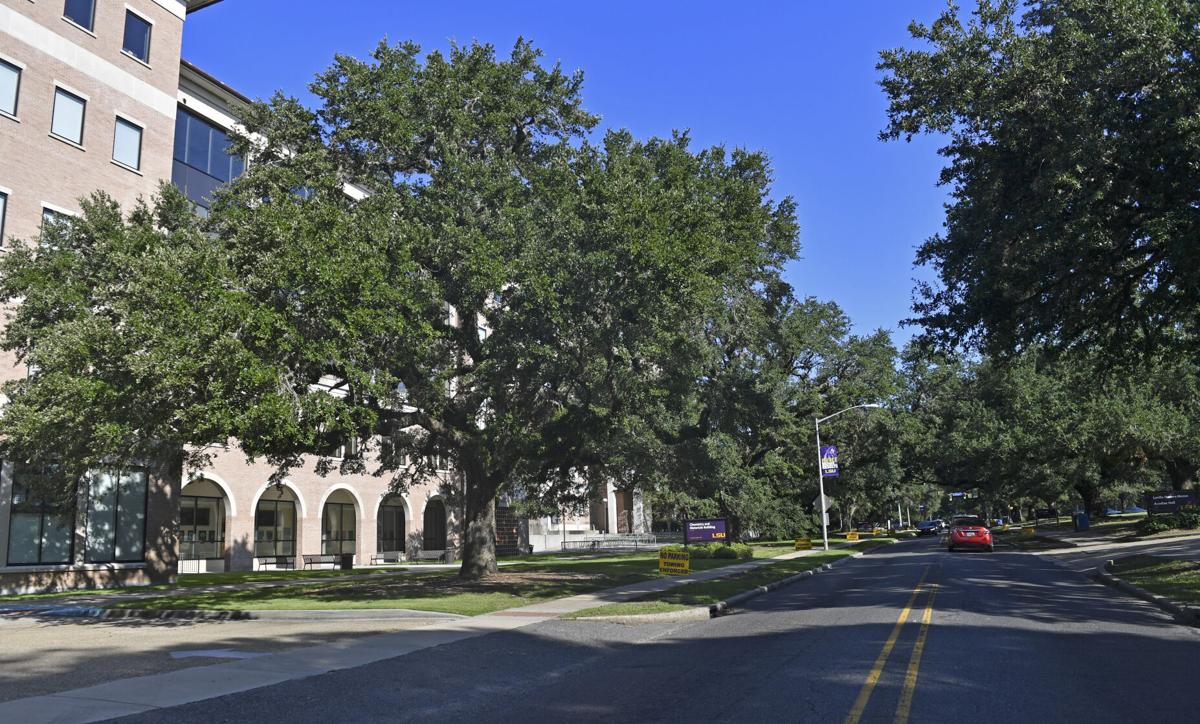 Seen on Highland Road, the campus of LSU is void of tailgaters ahead of the Tigers' home opener against Mississippi State, Saturday, September 26, 2020, during the coronavirus pandemic in Baton Rouge, La. 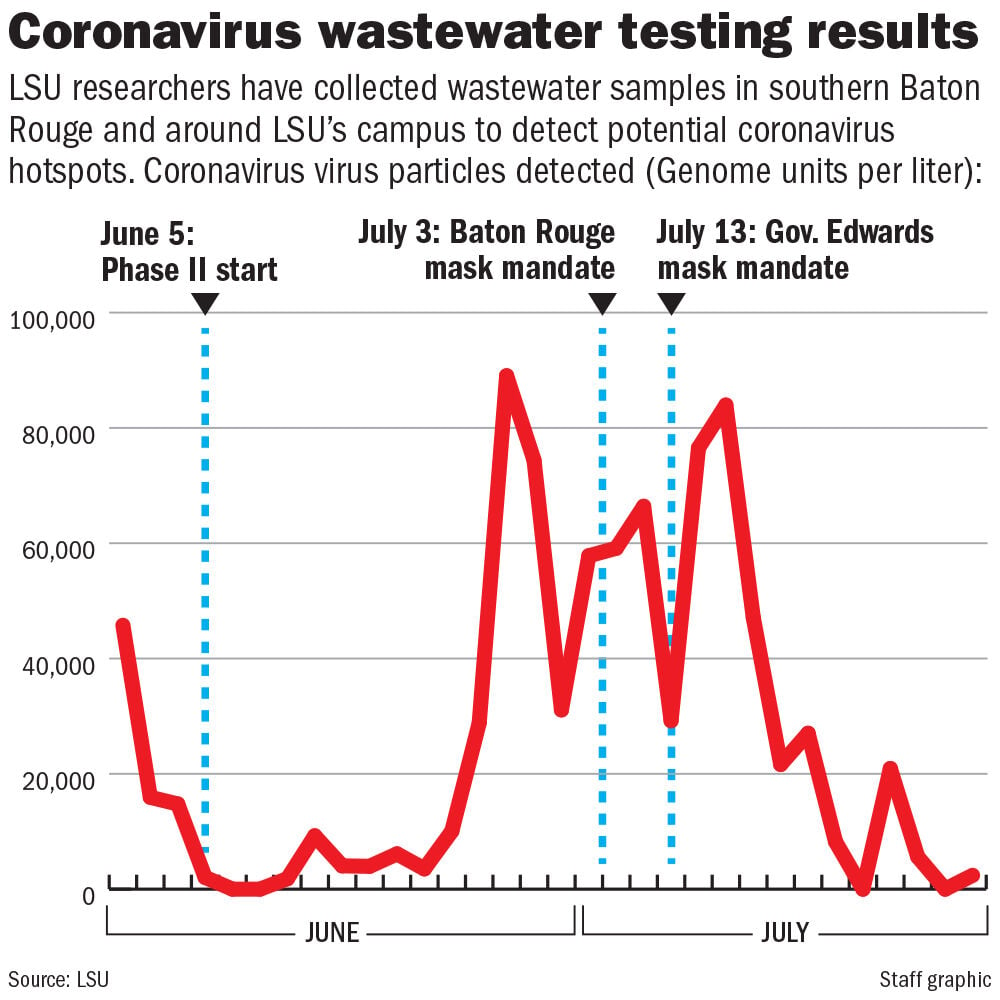 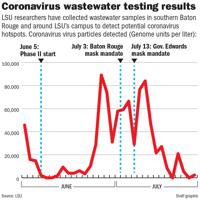 Seen on Highland Road, the campus of LSU is void of tailgaters ahead of the Tigers' home opener against Mississippi State, Saturday, September 26, 2020, during the coronavirus pandemic in Baton Rouge, La.

Each week since August, a team of LSU researchers suit up in protective gear as they collect and inspect wastewater samples beneath campus living halls with the hopes of spotting microscopic coronavirus samples that could indicate a potential outbreak.

With less than a quarter-cup of liquid that looks like dirty water, they’ve at times detected thousands of viral particles people shed when they go to the bathroom around campus, as well as broader testing in parts of Baton Rouge.

It’s a time-consuming process, often taking at least two days to deliver results. But it has provided an early alert and greater ability to find and isolate people before they spread the virus to others.

“Some people don't have symptoms, and some people just don't go to the doctor, and when they get tested it's a week later," said Civil and Environmental Engineering Professor John Pardue, who is collaborating with the school of veterinary medicine to sample wastewater. "It's helping the state and city understand the virus."

The process of using wastewater has become a growing trend for colleges like LSU across the nation, which brought students back to classrooms and campuses after the pandemic forced them to shut down this spring.

Some schools have struggled to keep the virus at bay, forcing them to revert to online classes. LSU school leaders say the wastewater monitoring is among the tools they're using to keep students on campus while limiting the risk of spread.

Since students returned to campus in August, some 1,150 students and 66 employees have contracted the coronavirus out of roughly 39,000 people, according to the school’s online dashboard as of Friday. More than 10,650 people have been tested in that time.

School leaders say wastewater monitoring gives an early opportunity to catch the virus because it can detect an infection days before symptoms like a high fever or cough show up.

Younger, healthier people -- like most college students -- tend to have mild symptoms when they’re sickened by the virus, compared to older adults and those with underlying health problems. Some never develop symptoms at all but can still spread the virus to others through respiratory droplets from coughing, sneezing, talking and sometimes breathing.

"They could go spread it to someone else who might have a worst case," Pardue said.

People also shed virus particles through their feces when they go to the bathroom, making wastewater testing a non-intrusive means to measure the level of virus in a given area.

Pardue said he was surprised at how well the system worked with just a small amount of water tested, as well as how closely it appeared to mirror reporting done by the state Department of Health.

Could studying sewage help map the spread of the coronavirus? LSU, Tulane researchers think so

To get a clearer picture of how many people have the novel coronavirus in Baton Rouge and New Orleans, LSU and Tulane researchers are studying…

Within two weeks of the governor issuing a statewide mandate on face coverings, his team observed a significant drop in coronavirus cases. They also observed trends mirroring state data when new cases surged this summer, as well as "blips" when students returned to college campuses and schools, Pardue said.

The testing does have its limits, however.

Because the water is collected from several sources, including multiple showers, sinks and toilets, it’s difficult to determine the exact number of cases a dorm or apartment may have. But of the four or five times the wastewater team has found signs of infections, as well as warning signs from the school’s symptom tracker, all students living in a dorm or apartment are required to get tested.

Similar, wider tests, LSU is conducting for East Baton Rouge Parish also aren’t able to pinpoint the exact area of infections. But they have given early warning signs that cases may be rising as samples are collected at southern and northern parts of the parish.

The parish soon plans to add five additional wastewater testing sights that will allow them to hone in on specific neighborhoods and subdivisions that may be experiencing high levels of infections.

“We expect this virus to be around for the next few years, so it’ll be useful for some time,” said the mayor's spokesman Mark Armstrong.

Instead of simply reporting how many coronavirus cases have been found in Louisiana nursing homes, the state also began reporting Wednesday th…

Parish Environmental Director Richard Speer said he hopes to include the results from the added test sites on the parish's online dashboard, but so far hasn't made any direct policy decisions based on data LSU has collected.

Virus samples found wastewater have dropped in recent weeks, as have new positive cases in East Baton Rouge Parish, according to data collected by the Louisiana Department of Health and LSU researchers.

Recently, researchers even recorded no new cases for the first time since they started testing city wastewater, Pardue said.

“When you're seeing high levels of virus, you realize there's a lot of people in the city who are sick or shedding it,” he said while recalling this summer's spike. “I'm glad we haven't seen those numbers go up very high again.”

Less exercise, more snacking and anxiety: Coronavirus has led to these bad habits