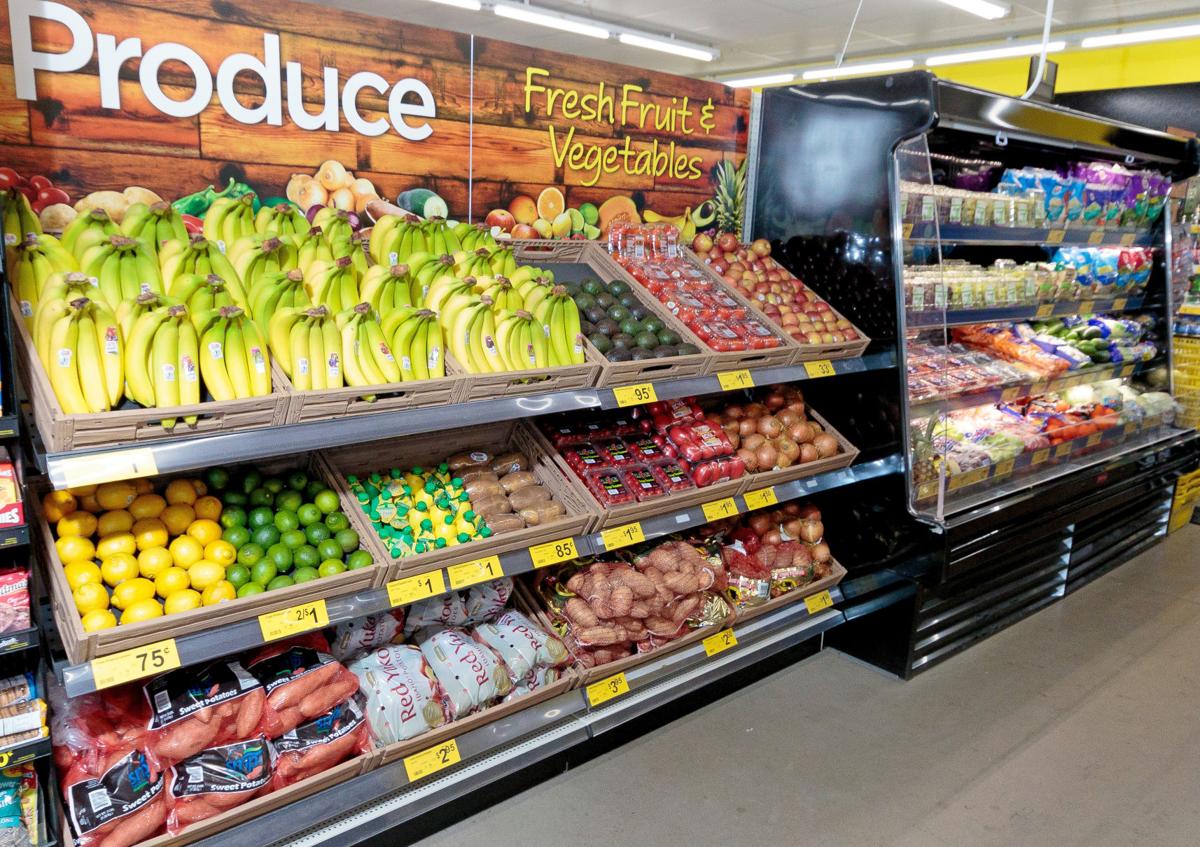 Dollar General stores at two locations in north Baton Rouge have newly installed produce sections with fruits and vegetables like the one pictured. 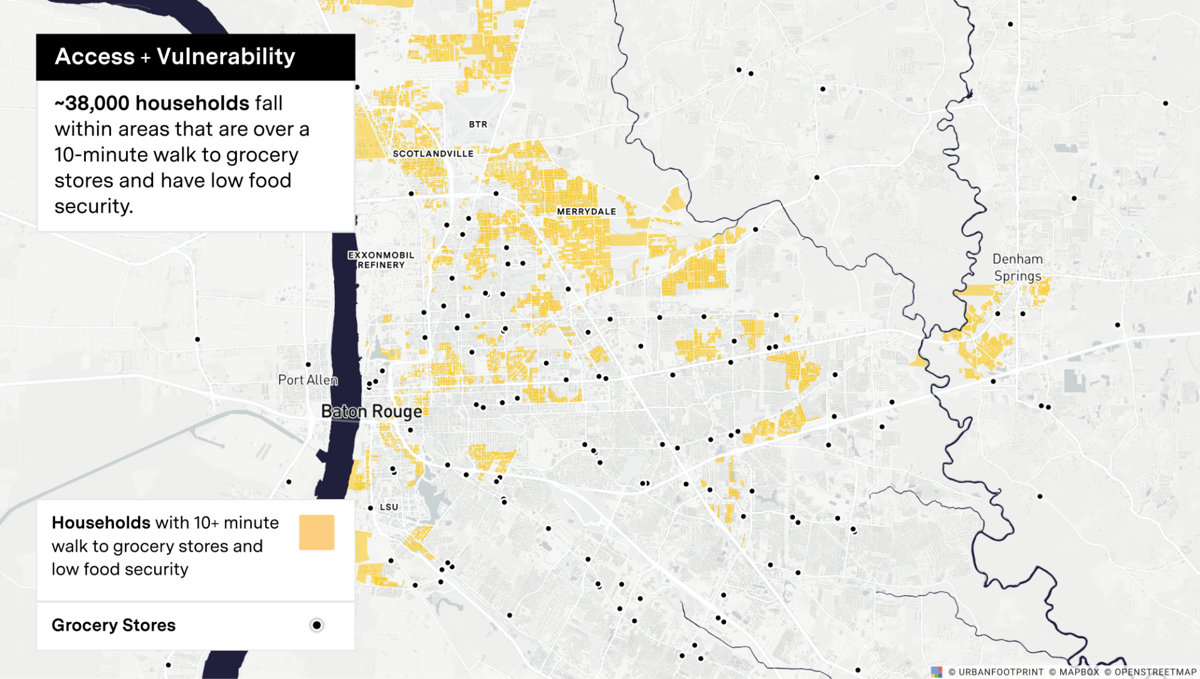 Roughly 38,000 households that are struggling to afford healthy food also fall within areas that are over a 10-minute walk away from a grocery store, according to an analysis from the Center for Planning Excellence and UrbanFootprint.

A lack of healthy food options in Baton Rouge's poor communities — and the chronic health issues that causes — is one reason the coronavirus is killing black residents at a higher rate, some experts believe.

For thousands of households in large swaths of north Baton Rouge, grocery stores and supermarkets are out of reach. Some residents don't own cars and many people depend on limited public transportation to get to the few stores that are located north of Florida Boulevard.

Families are often forced to rely on corner stores and fast food restaurants, where food is easy to access and affordable — but full of salt and fat.

The scarcity of healthy foods like fresh fruits and vegetables in Baton Rouge's poor, predominately black neighborhoods has led to higher rates of obesity, diabetes and hypertension —  chronic diseases that are placing patients at a higher risk of dying from COVID-19.

"If healthy foods aren't accessible, it makes it all the more difficult for individuals to follow a doctor's order to eat a healthy diet," said Faye Grimsely, a professor of public health at Xavier University.

On a typical day, customers at Phantasy Styles Barbershop off Florida Blvd. might arrive an hour early to shoot the breeze, play some dominoes…

For much of the last decade, city-parish leaders have struggled to entice grocery store retailers to open up shop in north Baton Rouge. Instead, they have relied on grants from a slew of nonprofits to build community gardens and expand food delivery services.

Dollar General, one of the few outlets for food in poor communities, just last month began offering fresh produce at two of its north Baton Rouge locations at the urging of Mayor-President Sharon Weston Broome.

But even if more grocery stores opened up, it wouldn't solve the underlying issues that led to the inequity in the first place, said Peggy Honore, a professor of public health at LSU.

"If these communities had better education opportunities, they might be able to earn a living wage and develop careers to break this cycle," Honore said.

The economic fallout from the crisis has only intensified the existing food insecurity issue, making it even more difficult for families to afford healthy and nutritious food.

The unemployment rate among low-income communities has skyrocketed. Across the country, nearly 40% of households making less than $40,000 a year lost a job in March, according to the Federal Reserve.

On top of that, grocery prices are soaring. In April, the price of a basket of groceries made the largest one-month jump since 1976, according to the U.S. Bureau of Labor Statistics.

Louisiana's food banks have experienced an 80% increase in demand and about 40% of people relying on food banks are doing so for the first time, according to Korey Patty, the executive director of Feeding Louisiana, the statewide food bank network.

The Greater Baton Rouge Food Bank is distributing half-a-million more pounds of food a month, according to Mike Manning, the nonprofit's chief executive officer. The food warehouse is used to responding disasters, but not for disasters that last for months on end.

"There's still a significant number of people with significant needs," Manning said. "We were already stretched thin trying to meeting the pre-existing need."

When health care workers first arrived at Capital Missionary Baptist Church on Tuesday to set up a pop-up coronavirus testing site, a line of …

To help understand where the need is greatest, officials at the Greater Baton Rouge Food Bank are now turning to new data analytics platform developed by Baton Rogue-based Center for Planning Excellence and UrbanFootprint, a software company.

The analysis synthesizes a slew of data sets on socioeconomic well-being and found that roughly 137,000 residents in Baton Rouge are food insecure and regularly struggle to afford basic groceries.

Roughly 38,000 of those households fall within areas that are over a 10-minute walk away from a grocery store. They're overwhelmingly clustered in north Baton Rouge.

"That is, to me, a depressing thing," said Edith Cox, 76, who has lived in Scottlandville most of her life and has watched as neighborhood grocery stores shut down and moved out. "We didn't have a choice. These stores just vanished."

The Greater Baton Rouge Food Bank is using the data platform to determine where to place pop-up food pantries. Still, that's just quick fix for the much more systemic issue of food insecurity in the city-parish.

Camille Manning-Broome, the president of the Center for Planning Excellence, hopes the data platform will be used by policy makers in the future to make more informed planning and development decisions.

She said the city-parish needs to curb sprawl and instead needs to re-invest in its existing communities. She highlighted the planned expansion of bus rapid transit along Plank Road and Nicholson Drive as a step in the right direction.

"Too many people don't have access to the basic things they need to be healthy and financial stable," Manning-Broome said. "It is a moral imperative that we change this."

Coronavirus testing in Baton Rouge: See map showing where you can get a test

It's much easier to get a coronavirus test today than it was in the early days of the pandemic, and it's now possible to get a viral test free…

There were 245 newly diagnosed cases of the novel coronavirus across Louisiana reported on Tuesday, according to the latest reported numbers f…