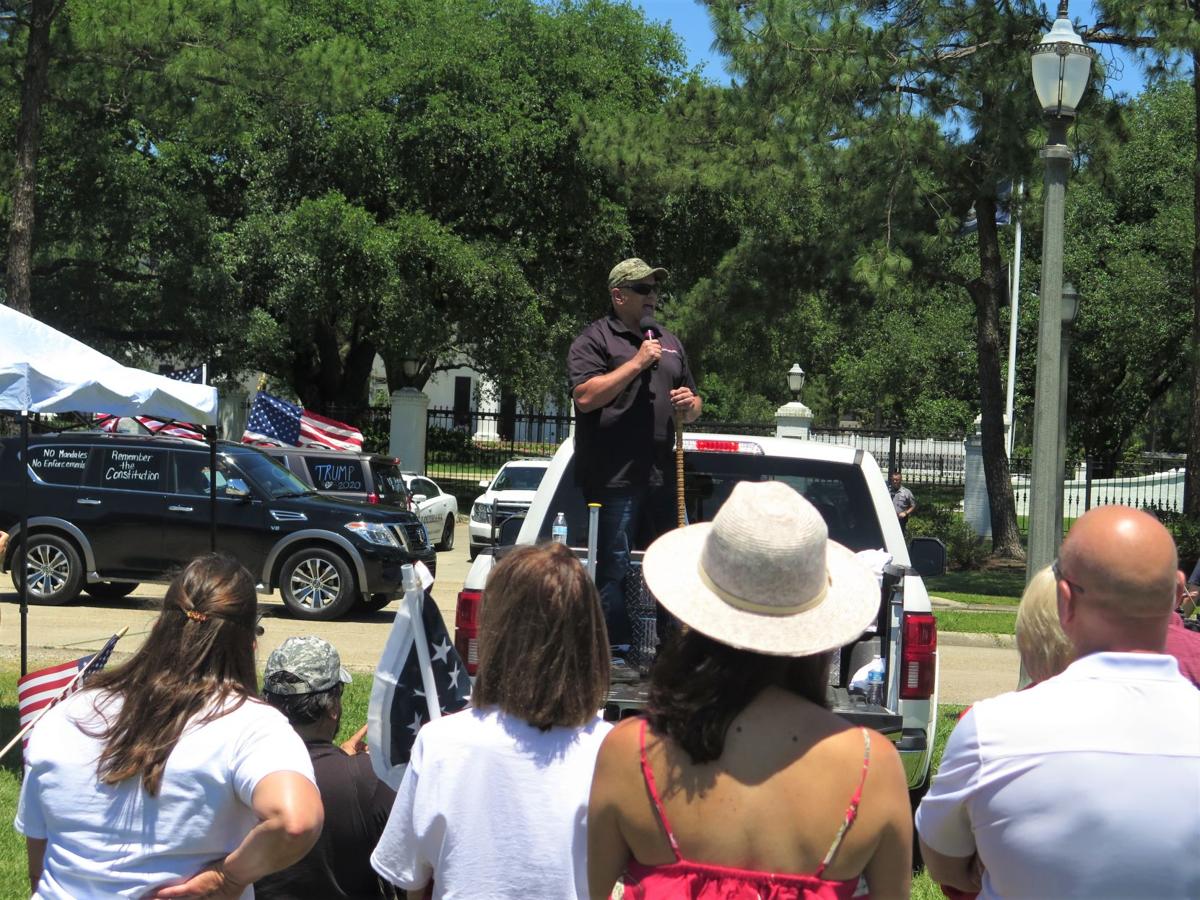 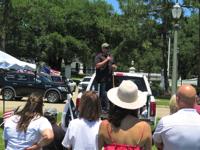 State Rep. Danny McCormick, R-Oil City, put together a protest to Gov. John Bel Edwards extension on Monday of a "stay at home" directive aimed at lowering the spread of the coronavirus. About 250 people attended the Saturday, May 2, 2020 rally. 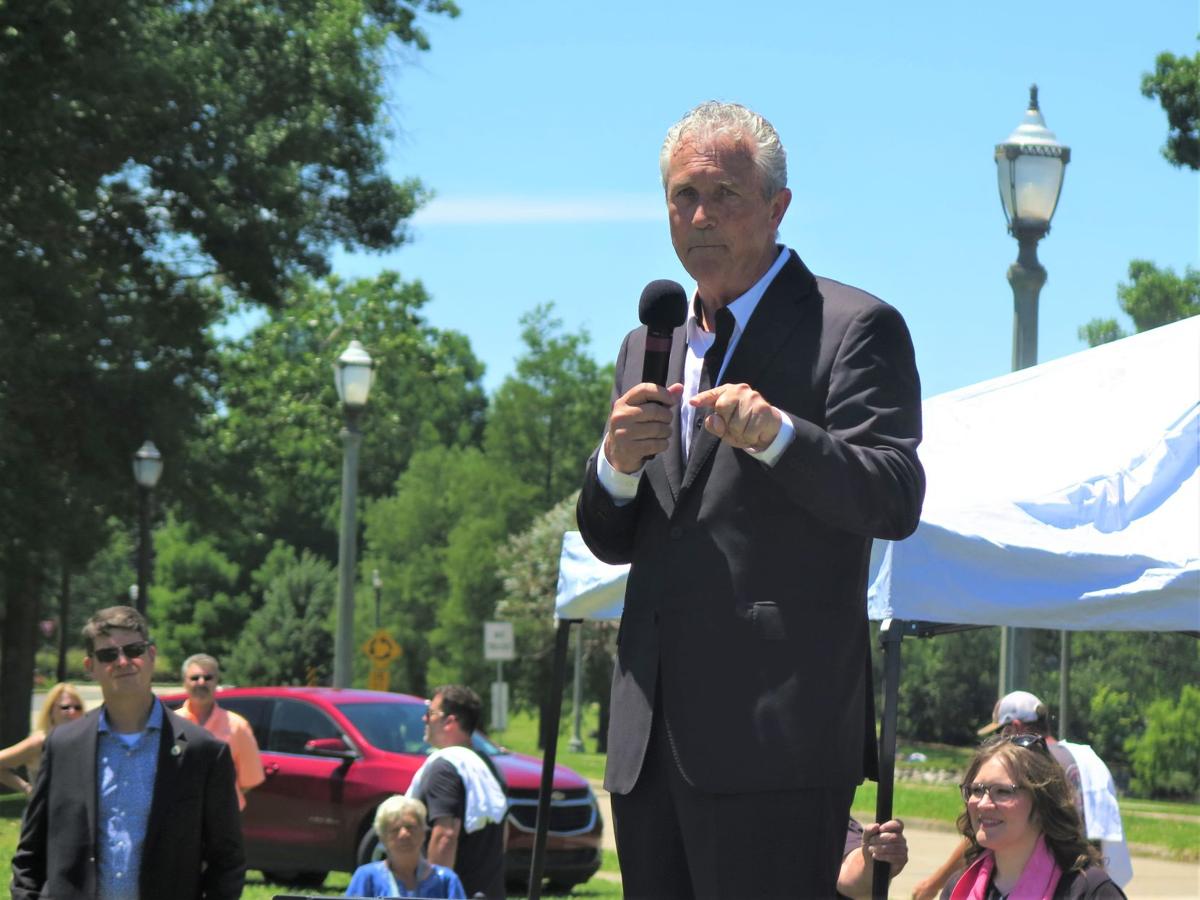 Timothy Spell, father of Tony Spell, pastor of Life Tabernacle Church, addressed a protest in front of the Louisiana Governor's Mansion on Saturday, May 2, 2020. Tony Spell is under house arrest for holding church services for congregations far above the gathering restrictions put in place by Gov. John Bel Edwards.

State Rep. Danny McCormick, R-Oil City, put together a protest to Gov. John Bel Edwards extension on Monday of a "stay at home" directive aimed at lowering the spread of the coronavirus. About 250 people attended the Saturday, May 2, 2020 rally.

Timothy Spell, father of Tony Spell, pastor of Life Tabernacle Church, addressed a protest in front of the Louisiana Governor's Mansion on Saturday, May 2, 2020. Tony Spell is under house arrest for holding church services for congregations far above the gathering restrictions put in place by Gov. John Bel Edwards.

About 250 protesters showed up at the Governor’s Mansion on Saturday demanding Louisiana immediately drop the restrictions put in place to slow the spread of the coronavirus and allow the unfettered reopening of businesses and churches.

Another 25 vehicles or so, honking their horns in support, circled past the mansion as politicians and preachers revved up the crowd standing under cloudless skies and in 90-degree temperatures.

John Bel Edwards: Louisiana making gains in coronavirus fight, but still has 'work to do'

Gov. John Bel Edwards said Friday that, while coronavirus concerns in the Baton Rouge area, the Northshore and a few others are the latest con…

No masks, no gloves and no social distancing were in evidence among the overwhelmingly white crowd, many of whom wore pro-President Donald Trump paraphernalia; shook homemade signs with slogans such as “I trust God with my immune system”; and waved American flags alongside yellow Gadsden “Don’t Tread on Me” flags that have been adopted by the tea party movement.

The protest was put together in the five days since Edwards extended his stay-at-home directives Monday, said state Rep. Danny McCormick, R-Oil City, who organized the effort on social media and by contacting churches and other groups.

Edwards said public health officials, after looking at the data, felt that May 1 was too premature to begin rolling out the first of a three-phase reopening. He extended the stay-at-home order to May 15.

About 250 people have gathered in front of La Gov’s Mansion as a couple dozen cars drive past to demand immediate reopening of state after shutdown to restrict spread of coronavirus. #lagov pic.twitter.com/TxVmr3mvY9

After about a dozen speeches, protesters helped themselves to pastalaya provided by Baton Rouge’s Life Tabernacle Church, whose pastor, Tony Spell, is under house arrest for holding services for a congregation in excess of the gathering limits laid out in Edwards’ directives.

Edwards was at the mansion during the protest but had no comment, according to his press office. But he has said repeatedly that in a state of 4.6 million people, not everyone was going to agree with his decisions.

Long lines after governor warns of coronavirus resurgence in Acadiana

The numbers were far bigger Saturday than any previous Louisiana protest. But the turnout paled in comparison to the hundreds who converged Thursday and Friday at State Capitols in Illinois and Michigan. In California, hundreds gathered at Huntington Beach near Los Angeles after Gov. Gavin Newsom ordered Orange County beaches closed.

All three states, as well as Louisiana, have Democratic governors.

Officials are weighing how fast to reopen movie theaters, gyms and other businesses, the closures of which have led to Depression-era unemployment rates, while maintaining efforts to keep the spread of the coronavirus under some control. But in many states, balancing public health and economic problems has become partisan.

John Bel Edwards responds to petition to cancel emergency order: 'Silly is not the right word'

Gov. John Bel Edwards on Thursday blasted a movement by some GOP state lawmakers to cancel his emergency declaration on the new coronavirus in…

“The governor has completely shredded the Constitution,” McCormick told the crowd.

“Traitor,” yelled out one protester.

Several women milled through the crowd asking for signatures on a petition demanding the state allow businesses to operate freely.

Protester Richard May, of Walker, held an American flag and said he wants the state to reopen on Monday. “If we continue on this course, we’re headed for a shipwreck,” May said.

Rookie state Rep. Chuck Owen, R-Rosepine, said his Vernon Parish home on the Texas border had only 16 confirmed cases and two deaths, with no COVID-19 patients in the hospital right now. He argued that some parishes, like his, could reopen and get businesses up and going again, while other parishes that are hot spots for the virus could continue sheltering in place.

“There’s going to be a lot of sacrifice in areas where we don’t need to make sacrifices,” said Rep. Raymond J. Crews, R-Bossier City.

Five state representatives spoke at the protest. Their speeches included exhortations that protesters call their state legislators and demand they sign a resolution that would terminate Edwards’ emergency health declaration, which is tied to executive orders that closed many businesses and ended the school year, among other things. The resolution needs 53 votes to pass.

Edwards has argued that terminating the order would halt federal disaster aid and could jeopardize other federal money, including the $1.8 billion Louisiana will receive from the $2.2 trillion CARES Act to reimburse coronavirus-related expenses.

As Louisiana extends coronavirus stay-home order, what are other states doing? Here's a list

Restaurants opened up to dine-in patrons in at least three states and the governor of Texas allowed movie theaters, malls and eateries to star…

Louisiana's independent bookstores thrive on personal touch. How are they handling coronavirus?

The coronavirus has threatened the survival of south Louisiana’s independent bookstores, robbing them of the very thing that helps them succes…