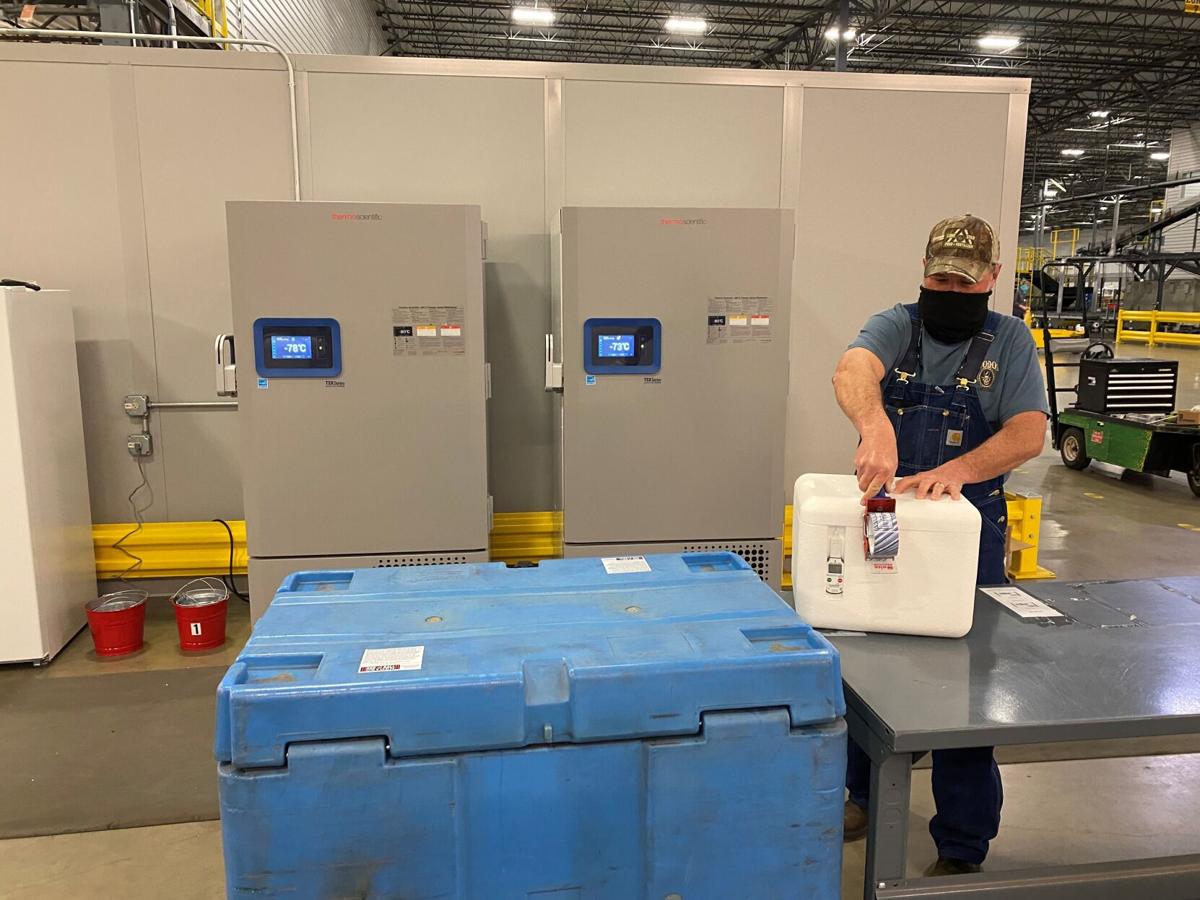 Alan Bass, an employee with Morris & Dickson LLC, a Shreveport-based medications distributer, is packing a thermal cooler that will be used to distribute a COVID-19 vaccine that needs to be stored in ultra-cold environments. 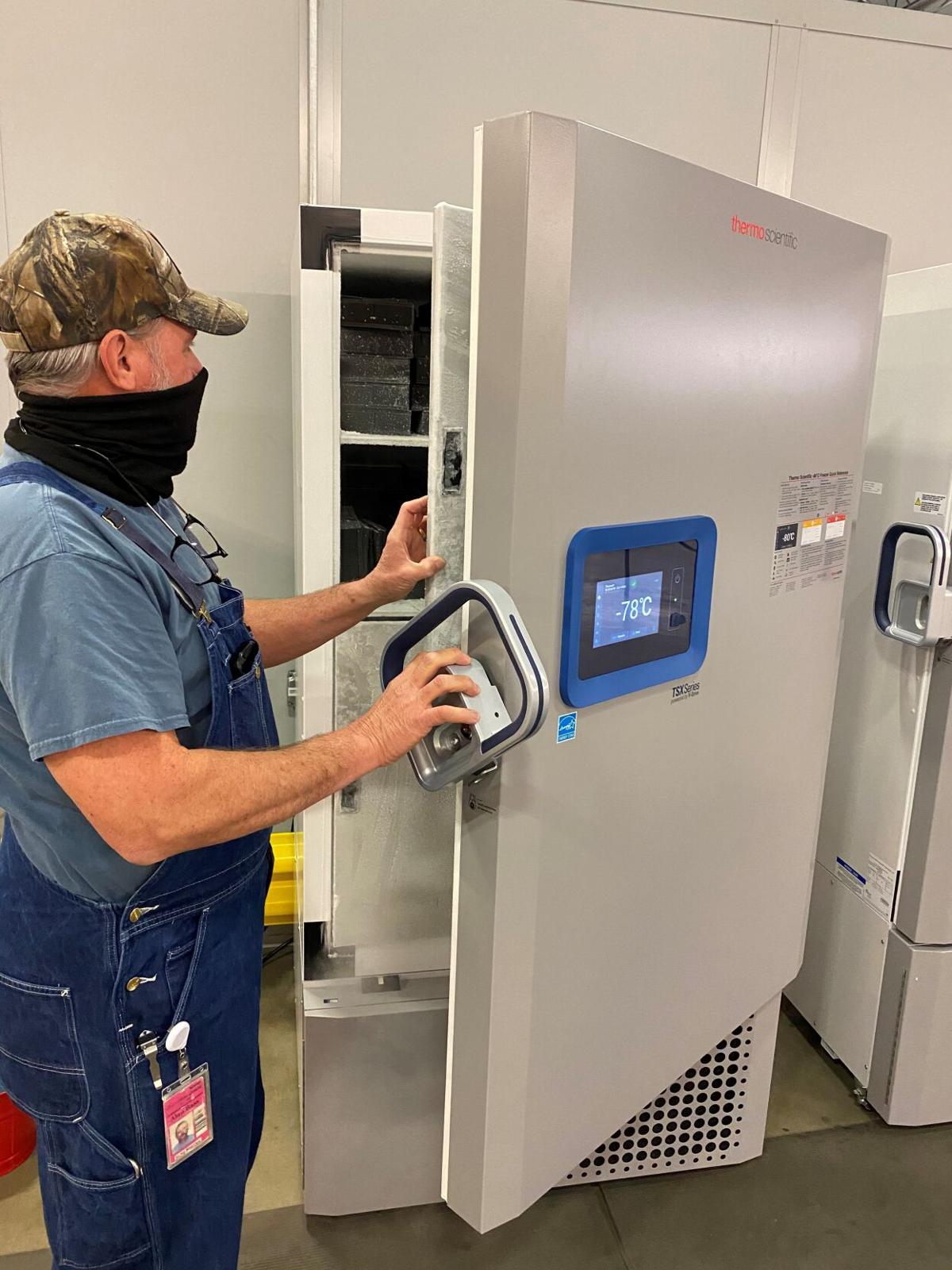 Alan Bass, an employee with Morris & Dickson LLC, a Shreveport-based medications distributer, opens the ultra-low temperature freezer that will store the COVID-19 vaccine.

Alan Bass, an employee with Morris & Dickson LLC, a Shreveport-based medications distributer, is packing a thermal cooler that will be used to distribute a COVID-19 vaccine that needs to be stored in ultra-cold environments.

Alan Bass, an employee with Morris & Dickson LLC, a Shreveport-based medications distributer, opens the ultra-low temperature freezer that will store the COVID-19 vaccine.

Thanks to the number of hurricanes hitting the state, a Louisiana company will be able to distribute the COVID-19 vaccine far faster than other states.

Louisiana’s biggest hospital systems, like Ochsner Medical Center in Jefferson and Our Lady of the Lake Regional Medical Center in Baton Rouge, will get the vaccines directly from Pfizer once the U.S. Food & Drug Administration approves moving 3 million doses.

One day after a federal panel of medical experts blessed Pfizer's coronavirus vaccine for emergency use, the Baton Rouge area's largest hospit…

That’ll be the case in most states with the larger systems getting medicine. But the smaller hospitals, the ones with fewer than 975 staffers in line to vaccinated, will have to quickly travel to those hospitals and fetch their doses, then get back to administer the injections.

In Louisiana, Morris & Dickson LLC, a Shreveport-based medications distributer, will be able to break out the doses into the smaller quantities, then will deliver to the smaller hospitals and healthcare facilities scattered across the state.

“In Louisiana all of our 64 parishes, all of the hospitals and first responders that are authorized in this first wave will get it at the same time,” said Paul Dickson Sr., the chief executive officer at the family-owned company.

“We will have complete and thorough distribution in Louisiana,” he added Friday.

The vaccines are hoped to eventually end a pandemic in which a total of 15.7 million Americans have been infected and 293,000 have died. On Friday, Mississippi announced that the state’s hospitals have run out of intensive care beds.

The coronavirus vaccine is coming to Louisiana. Here's what you need to know.

It looks like the vaccine is coming sooner than later to Louisiana. When will they arrive, and who will get them first? Here are your question…

Pending federal approvals, Louisiana officials expect 39,000 doses of Pfizer’s vaccine will start being injected into the state’s health workers early next week, followed by another 40,000 doses the following week.

Between 200,000 and 215,000 people are estimated to be in the first priority group for the vaccines, according to Louisiana Health Department figures. That includes 75,000 to 80,000 residents and staff of nursing homes and other long-term care facilities and between 125,000 and 135,000 health workers.

The vaccine is shipped in trays and each tray holds 195 vials, which calculates to 975 doses. The medication can last six months at negative 112 degrees Fahrenheit, said Paul Dickson Jr., vice president of operations and in charge of putting together the distribution.

The medication can be held below 28 degrees Fahrenheit for five days.

Morris & Dickson has experience dealing with ultra-cold requirements, he said.

As coronavirus surges, first vaccines could be injected in Louisiana as soon as this weekend

With the first health workers in Louisiana expected to get shots of a new COVID-19 vaccine as early as this weekend, Gov. John Bel Edwards on …

Smaller facilities often don’t want to vaccinate all at once because some people will suffer side effects and feel a little ill for 24 hours-to-48 hours. They’re trying not to have too many staffers call in sick at the same time.

“We’re going to do the state tells us to do,” Dickson Jr. said. “We’re hearing from the field that we’re going to need to the net this out.”

Dickson Sr. said the company developed the necessary procedures during frequent hurricanes. “We frequently do encounter healthcare distribution issues during hurricane. That really is what helped foster a relationship between the state of Louisiana and Morris Dickson,” he said.

The state has laid out a tentative plan to prioritize vaccinations to certain groups based on risk of exposure, risk of transmitting to others…

For the latest coronavirus vaccine news in Louisiana, sign up for our new email newsletter

The brief statement came less than an hour after President Donald Trump tweeted that FDA “is still a big, old, slow turtle.”