Escorted by police officers, a funeral procession, which has been a rarity since the coronavirus hit, enters Resthaven Cemetery Wednesday May 20, 2020, in Baton Rouge, La. Seale Funeral Home organized the funeral procession from its Denham Springs location. 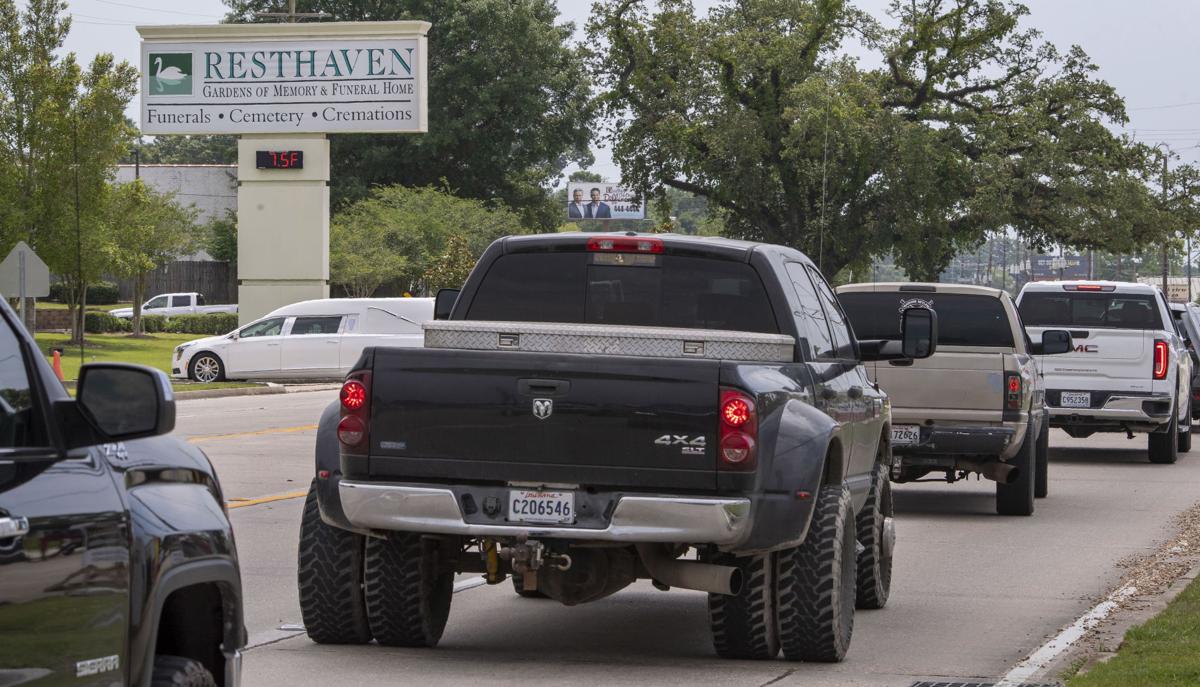 A funeral procession, which has been a rarity since the coronavirus hit, is led by a hearse as it enters Resthaven Cemetery Wednesday May 20, 2020, in Baton Rouge, La. Seale Funeral Home organized the funeral procession from its Denham Springs location.

Escorted by police officers, a funeral procession, which has been a rarity since the coronavirus hit, enters Resthaven Cemetery Wednesday May 20, 2020, in Baton Rouge, La. Seale Funeral Home organized the funeral procession from its Denham Springs location.

A funeral procession, which has been a rarity since the coronavirus hit, is led by a hearse as it enters Resthaven Cemetery Wednesday May 20, 2020, in Baton Rouge, La. Seale Funeral Home organized the funeral procession from its Denham Springs location.

Freddie Williams Sr., a prominent educator in Baton Rouge, touched the lives of many during his decades of work in schools. And he is survived by a large family, which includes 17 grandchildren and seven great grandchildren.

So his recent passing would ordinarily call for a large funeral. But, due to the coronavirus outbreak, his services at Winnfield Funeral Home in Baton Rouge will be limited to 60 people. Out-of-town family members are being asked to stay home.

Louisiana to enter Phase I of coronavirus reopening, but 'It’s not mission accomplished'

“We’re telling them not to come,” said Millie Williams, his wife of 59 years. “We’re going to have it live-streamed.”

In the two months while Gov. John Bel Edwards’ stay-at-home order was in place, no more than 10 people could attend any funeral. Since that order has been lifted, the services can be a bit bigger, but funeral homes and churches are still limited to 25 percent of their capacity.

“It’s traumatizing to see your business go from hundreds and hundreds of people to maybe 10 people, all with masks on and no hugs, no physical connections,” said Darryl Hambrick, owner of Hambricks Family Mortuary in Gonzales.

It’s been hard to explain, especially to young children.

“How do you tell them they can’t go to grandmother’s funeral?” Hambrick asked.

Williams, the former Scotlandville Magnet High School principal, died peacefully in his sleep on May 15, the same day the governor relaxed his stay-at-home order. Unbeknownst to his family, he left behind detailed instruction for his funeral, down to the songs and scriptural reading as well as who would be doing what.

As funeral attendance is limited due to coronavirus, some funeral homes turn to livestreams

With 104 first cousins, Jacqueline "Jackie" Kessler Wood knew there was going to be a problem when a beloved relative died last week.

The family is strictly following his wishes, except one: they can’t have the service at Bethel AME Church in Baton Rouge.

“Our church is not letting anyone in, even with the 25%, until things settle down,” Millie Williams said.

Those who work in local funeral homes say the coronavirus and the limits it has placed on personal contact have profoundly interrupted the traditional grieving process.

“This pandemic has stripped that away from people,” Muhleisen said.

Greg Clark, owner of Church Funeral Services based in St. Amant, recalled a schoolteacher who died recently who had many friends and family out of state who couldn’t travel, so the family opted for a service broadcast over Zoom.

“They had 76 people on the call. The daughter asked, ‘Can we do it again? The next day we did it again for 50 people,” Clark said.

Funeral home employees have been considered essential workers throughout the outbreak. Some have had to work while facing their own tragedies.

“My father died during this from COVID, so I’ve seen both sides of this fence,” said Bobby Suchman, general manager of Seale Funeral Home in Denham Springs.

The family elected to have his father cremated.

Once rare in Louisiana, cremations have grown in popularity since the start of the outbreak.

“I didn’t have a cremation in this funeral home until maybe 10 years ago,” Hambrick said. “Now I do more cremations than I’ve ever done.”

Directors differ on whether they see cremations remaining popular.

“I think it’s going to go back pretty much to normal,” said Kay Stewart, director of Wilson-Wooddale Funeral Home in Baton Rouge,

Hambrick disagrees: “You go to New York and California, cremation is nothing.”

For her part, Millie Williams said she would never have agreed to have her husband cremated.

Some funeral directors worry that the rush to cremate is being driven by misplaced coronavirus fears.

Suchman said he thinks misinformation has played a part in the rise of cremations. Some families whose loved ones died from COVID-19 said health professionals told them mistakenly that by law the body had to be cremated.

And the dangers of exposure from that person who had coronavirus have been exaggerated, he said. Rules for handling coronavirus victims grew stricter, but funeral homes already took great precautions.

“When we walk into a residence or a facility, we never know what someone may have,” Suchman said.

Hambrick said at first he as well gave in to fear.

“The first time I’ve ever been scared to go to a funeral home was when COVID came” he recalled.

But he said he quickly studied up on the virus and calmed down: “My dad told me knowledge replaces fear.” He said many people he deals with, however, have yet to do the same.

“We’ve had churches who said they didn’t want the body at the church, but it’s not the body that’s the problem,” Hambrick said.

The embalming process, he said, is good at killing the virus and preventing the body from being a threat. But those attending the service may be carrying the virus and risk exposing each other.

Even in preparing for the funeral, some families are oblivious to the real dangers, he said. While he tries to get families to arrange their funerals remotely, sometimes people show up anyways. Recently he had 10 family members visit him, forcing him to move everyone into the chapel so they could spread out and complete the arrangements safely.

“They don’t have any fear of their family members,” he said, “but then they come into my environment to expose my family.”

Since her husband’s passing, Millie Williams said she has been gratified by the outpouring of support. Many people have called or posted on social media about what Freddie Williams meant to them.

“A lot of it I knew, but I didn’t know the total impact,” she said.