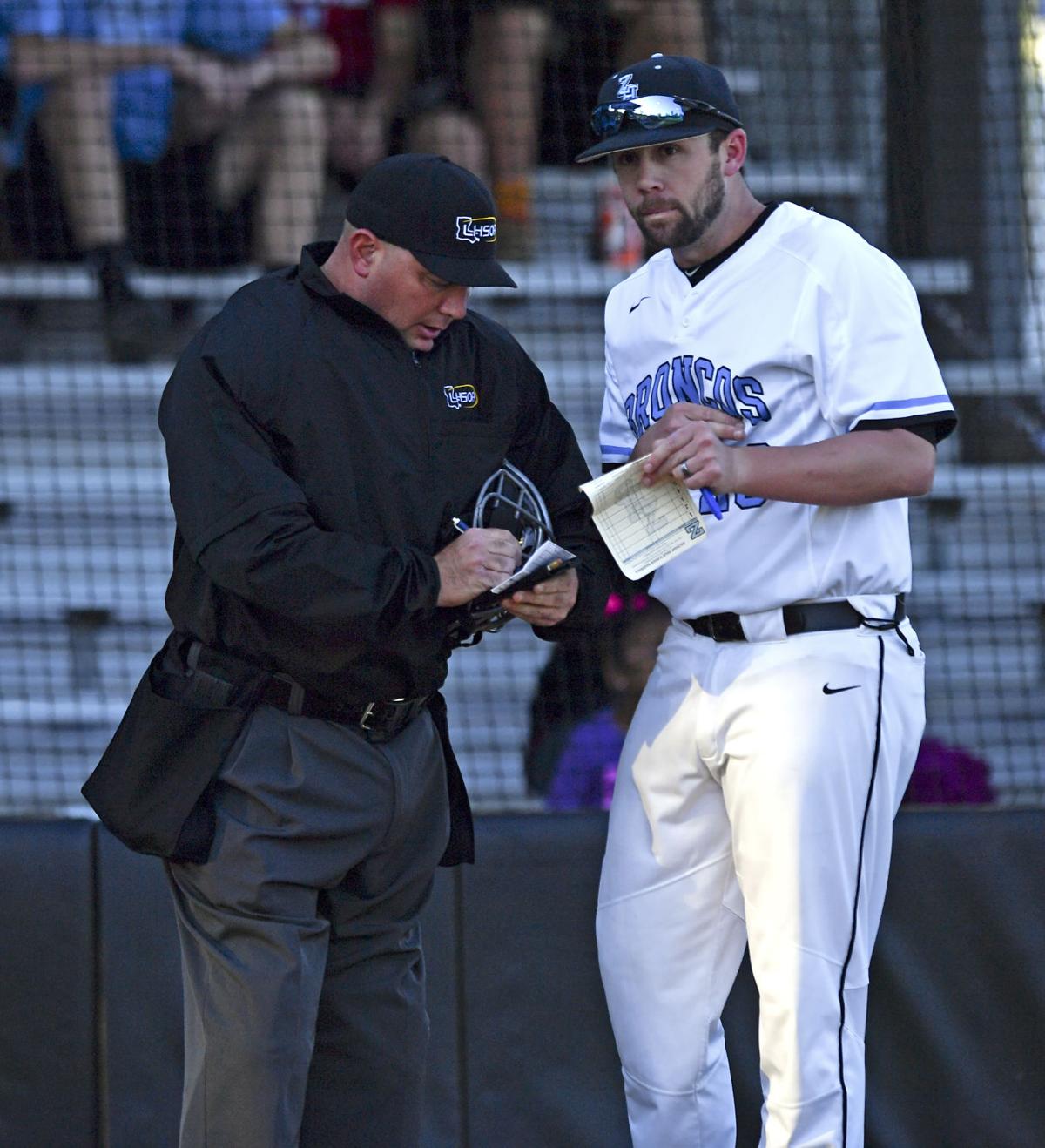 Zachary head coach Jacob Fisher speaks with a game umpire in a game against Catholic High, Thursday, March 21, 2019, at the Zachary Youth Park in Zachary, La. 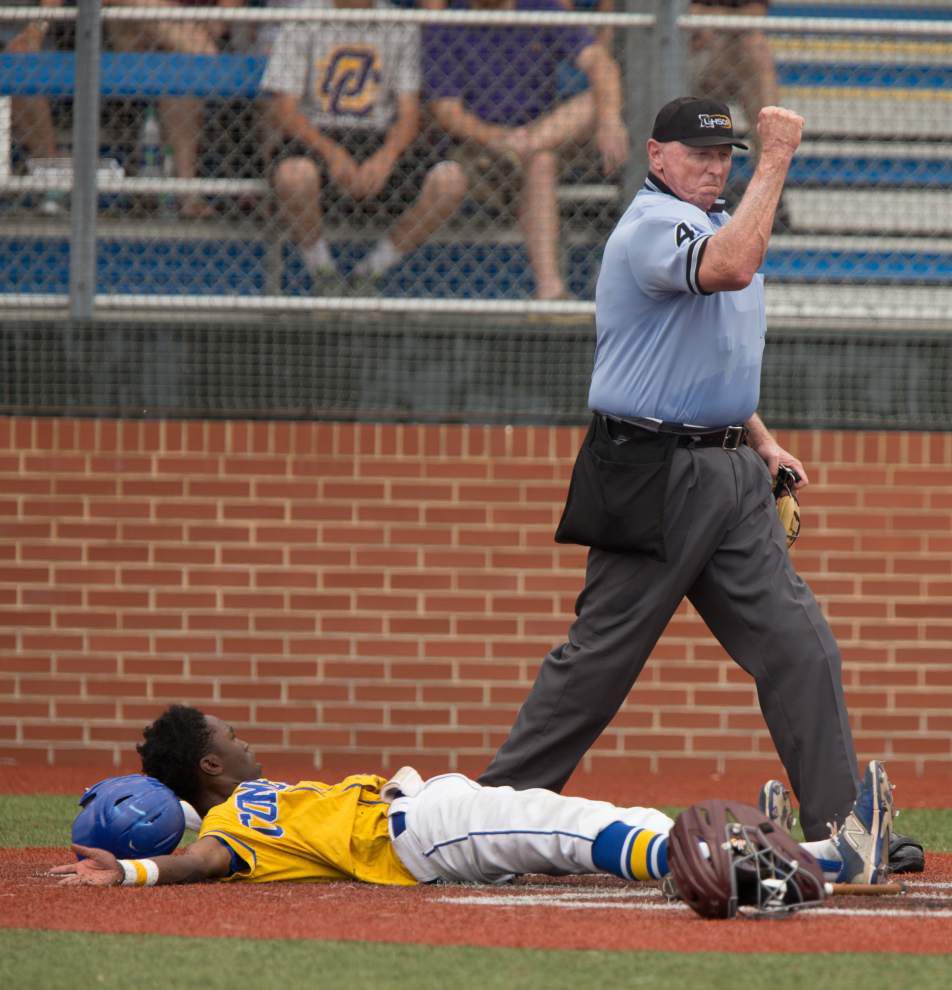 St. Charles Catholic's Lloyd Nash (11) lays on the ground as the umpire signals the out during the 2016 Allstate Sugar Bowl / LHSAA Baseball Class 2A State Championships at Sulphur Parks and Recreation (McMurray Park) in Sulphur, Louisiana on Saturday, May 14, 2016. (AP Photo/Lake Charles American Press, Kirk Meche)

Zachary head coach Jacob Fisher speaks with a game umpire in a game against Catholic High, Thursday, March 21, 2019, at the Zachary Youth Park in Zachary, La.

St. Charles Catholic's Lloyd Nash (11) lays on the ground as the umpire signals the out during the 2016 Allstate Sugar Bowl / LHSAA Baseball Class 2A State Championships at Sulphur Parks and Recreation (McMurray Park) in Sulphur, Louisiana on Saturday, May 14, 2016. (AP Photo/Lake Charles American Press, Kirk Meche)

It has been 10 days since Collin Andrews walked on a baseball diamond. After a tournament game between Jesuit and Denham Springs high schools one thought stuck in his mind.

“Is this it?” Andrews recalls. “I couldn’t help it. There are days now when I think, ‘You should be on the field.’ But I’m not and I don’t know if that will happen again this year.”

The process is different 10 days into the coronavirus pandemic for LHSAA assistant executive director Lee Sanders, who coordinates officials in LHSAA sports.

On a “normal” Tuesday, Sanders would head out to observe baseball and softball officials. Instead, he is pondering contingencies.

One plan is based on Louisiana’s shelter-in-place order being rescinded so that games can resume, leading to LHSAA tournaments and title games in May or June. The other would prepare officials in all sports for 2020-21 if no more games are played.

“The tough part is these umpires have no games to go to,” Sanders said. “Their seasons were about to kick into high gear with district play and then the playoffs. Now there is nothing.

“It is certainly a loss financially. But it’s also a loss personally. These people plan their lives around games. There is a camaraderie that exists between officials and with the coaches and players. That is lost too.”

The money can be good. The lowest rate per game for a “registered” umpire is $65 for baseball and $50 for softball. Umpires certified at higher levels earn higher rates.

College and professional officials serve under a conference or league. LHSAA officials in all sports are independent contractors who are paid by the host schools they call games for. The LHSAA handles championship events pay.

No games … no pay. Students, educators and those employed in a variety of professions work as LHSAA officials. There is a national shortage of high school officials that impacts Louisiana.

An average number of 50 varsity games each week for baseball/softball are divvied up by assignment secretaries in the Baton Rouge area. That is a loss of close to 200 games to date. Other limits are being pushed.

“For a lot of officials, this is a side job and extra money. But others count on it as income. It’s not like they can go out and get another job now. This situation is ongoing. We don’t know when or how this will end.”

Louisiana High School Officials Association president Paul LaRosa of New Orleans heads the board Jenkins serves on. LaRosa is a football official but has been part of discussions in his area about officials who are sidelined from LHSAA games, along with youth baseball/softball.

“The LHSOA is a not-for-profit group,” LaRosa said. “We have no employees and raise just enough money to cover expenses. I’m also on the board of the (National Sports Officials Association), which offers insurance, but that insurance does not cover loss of income. We need to look at things to do now and in the future.”

LaRosa said the LHSOA plans to contact local legislators to see if any of a proposed federal stimulus packages could be applied to independent contractors.

Jenkins worries about retention of younger and older officials, who may opt out, either frustrated or fearing other losses. Andrews, an educator, and softball umpire Stephanie Simpson, who has a government-based job, are concerned too. The LHSOA’s LaRosa sees a silver lining in which the crisis could bring new officials in.

“This is hard,” said Simpson, vice president of the Baton Rouge Softball Umpires. “This isn’t a side hustle for me. I like watching kids growing and improve. I miss it.”

If you have questions about coronavirus, please email our newsroom at online@theadvocate.com.