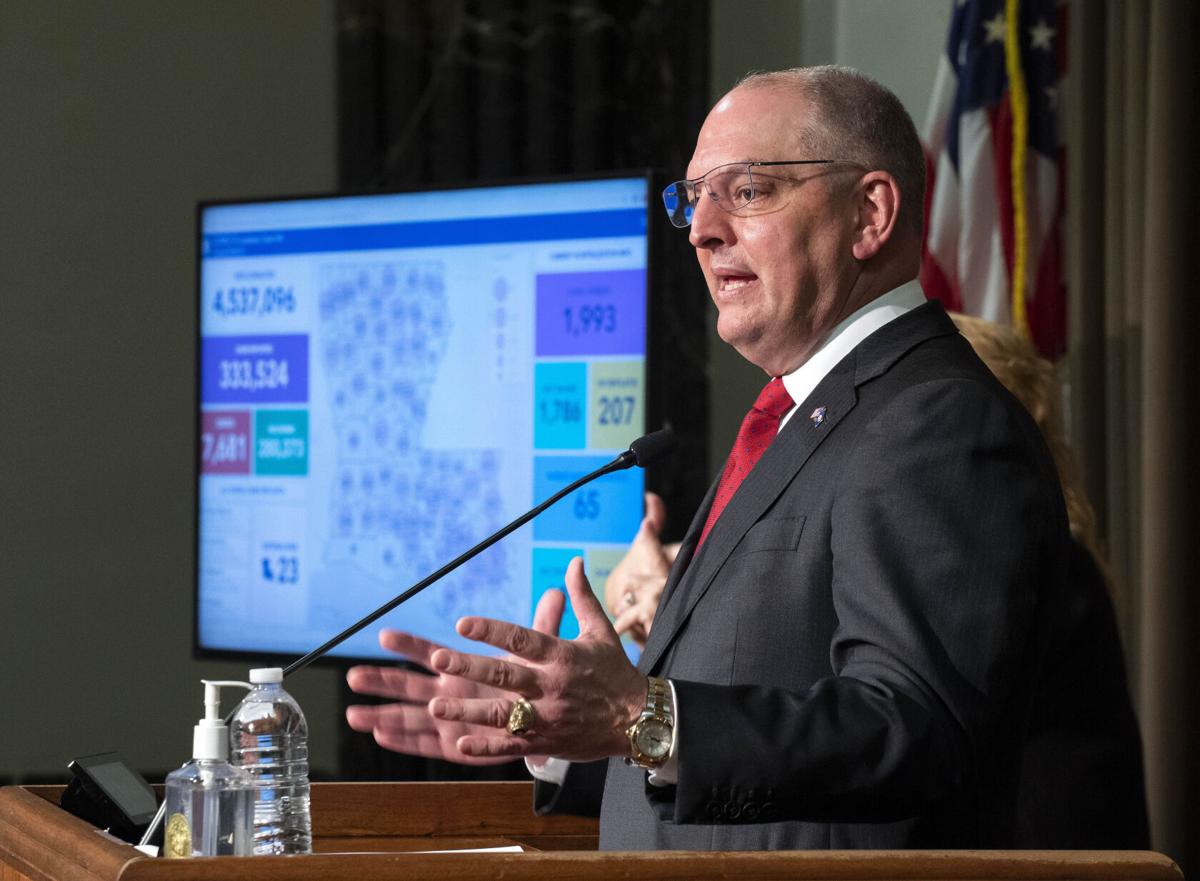 Governor John Bel Edwards speaks at his COVID-19 update press conference, Wednesday, January 6, 2021 at the State Capitol in Baton Rouge. Louisiana, with the day's COVID-19 numbers behind him. Regarding members of the public not adhering to virus mitigation strategies like mask wearing, 'What are we going to do, start locking people up?' he asked rhetorically near the end of the press conference. 'We are not going to enforce our way out of this.' 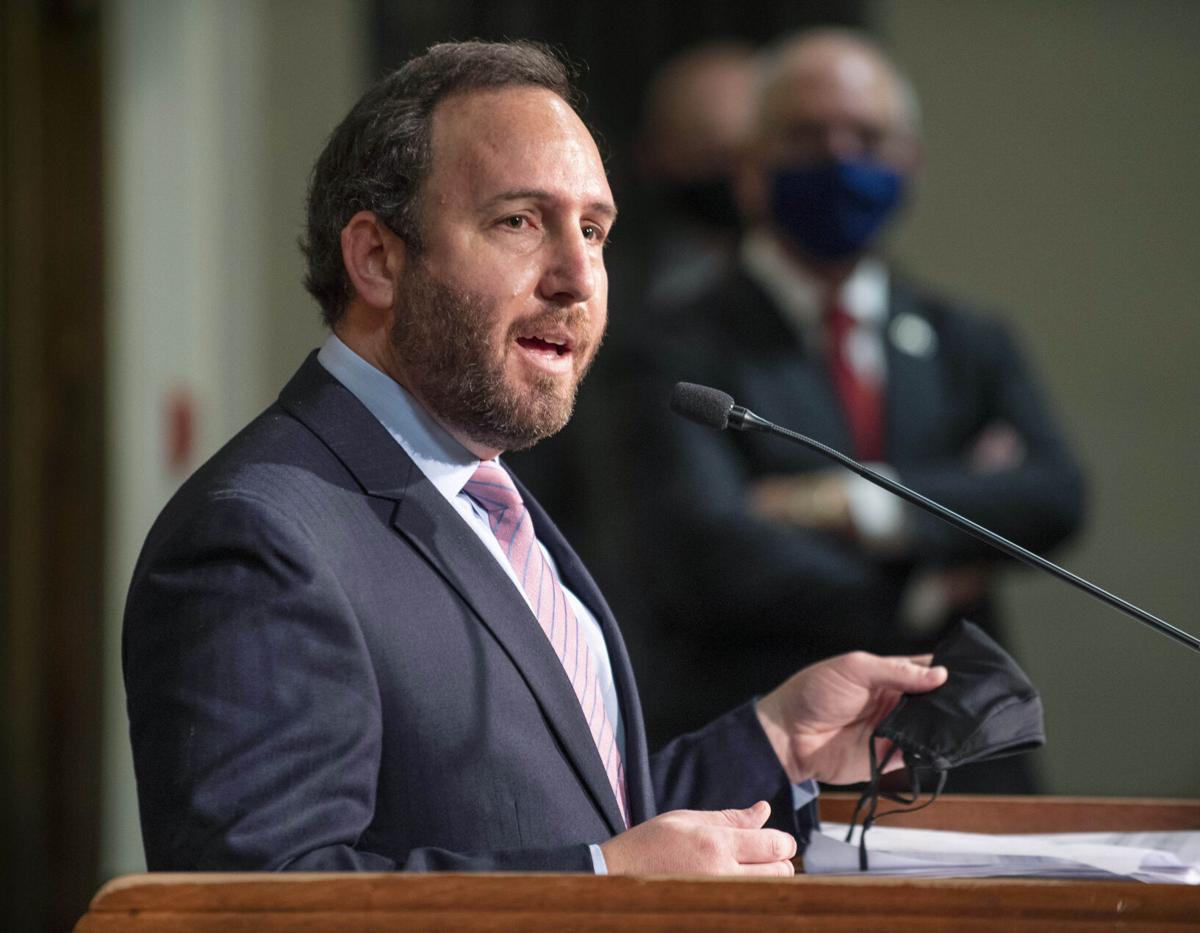 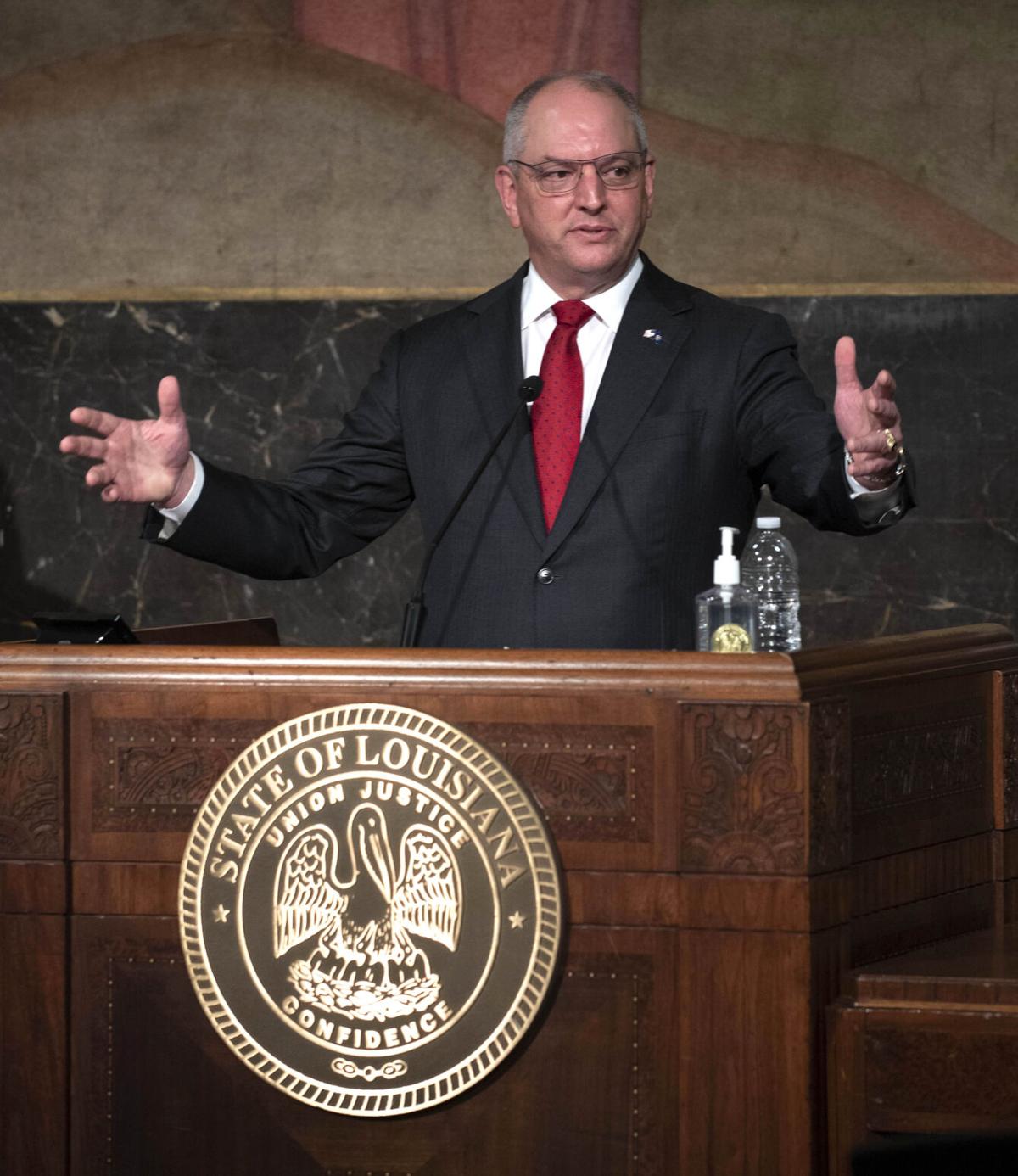 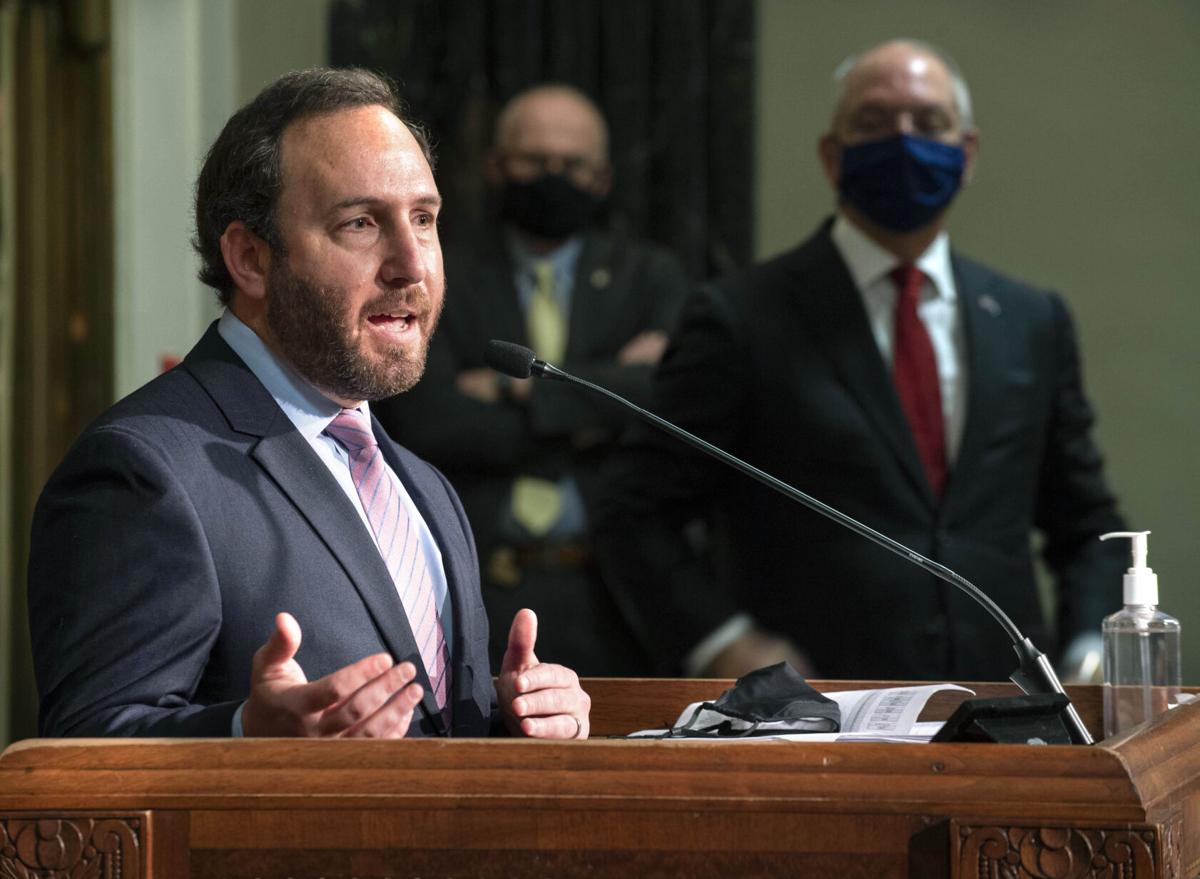 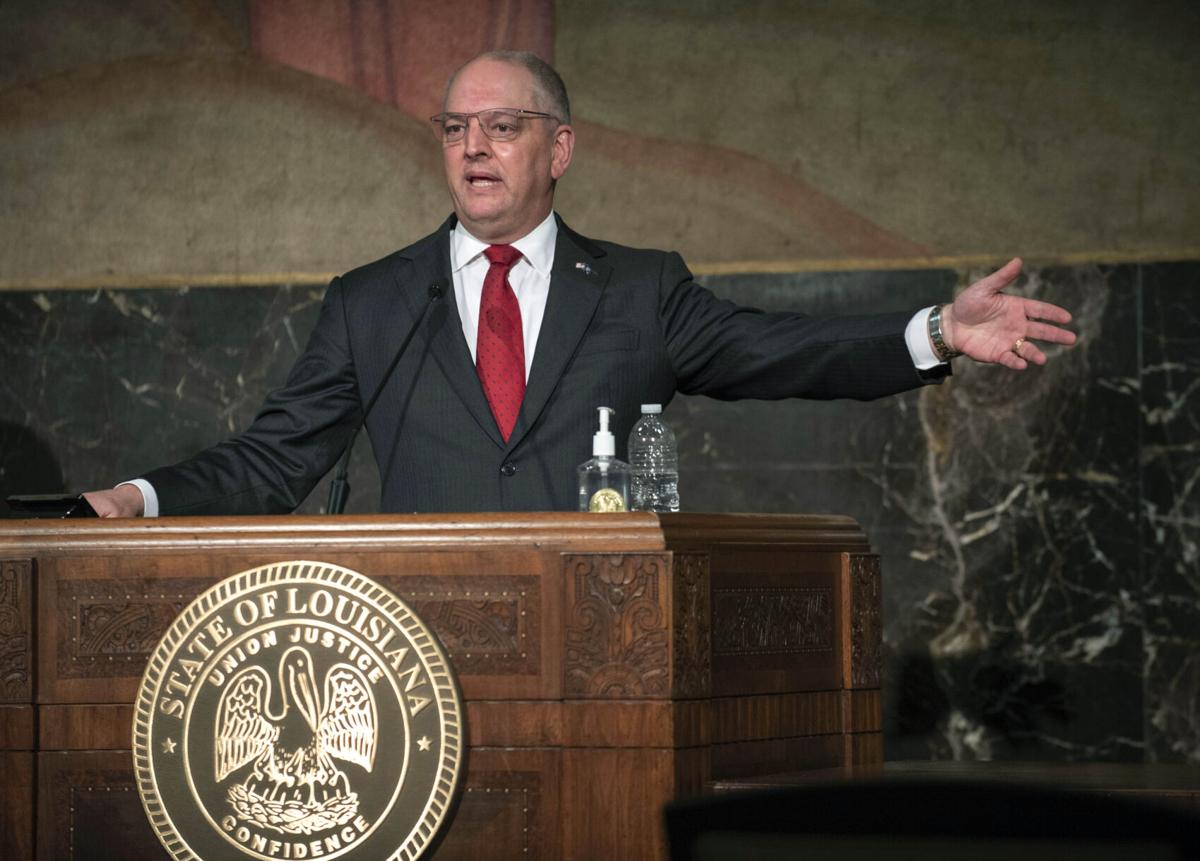 Governor John Bel Edwards speaks at his COVID-19 update press conference, Wednesday, January 6, 2021 at the State Capitol in Baton Rouge. Louisiana, with the day's COVID-19 numbers behind him. Regarding members of the public not adhering to virus mitigation strategies like mask wearing, 'What are we going to do, start locking people up?' he asked rhetorically near the end of the press conference. 'We are not going to enforce our way out of this.'

Thousands more doses of COVID-19 vaccines will be distributed to pharmacies across the state next week, with Gov. John Bel Edwards promising the speed of shots will improve and that each parish will have a provider offering immunizations to the elderly.

In all, Louisiana expects nearly 56,000 additional doses next week, split about equally between Pfizer’s and Moderna’s vaccine, and 18,700 of the Moderna doses will be diverted to nursing homes through a federal program.

The remaining Moderna doses will be combined with between 10,000 and 15,000 unused doses that have been left on the shelves of the state’s distributor to distribute to pharmacies and other providers, said Dr. Joe Kanter, the state health officer.

Still, seniors who signed up for waiting lists at one of the 107 pharmacies that received vaccines this week may still be waiting through next week. Kanter said he can’t promise each of those 107 pharmacies will get another shipment of doses immediately.

Instead, Gov. Edwards promised to expand the pool of pharmacies and other providers to include every parish, not only the 52 parishes included in the pharmacy program this week.

“We will have more locations across the state that will receive the Moderna vaccine that will be administered to individuals over 70 than we had this week,” Edwards said. “I have instructed (Louisiana Department of Health Secretary Courtney) Phillips to make sure that we are in all 64 parishes. Not necessarily with a pharmacy but with a provider. It may be a clinic. It may be a hospital. But there will be some doses available for this priority group next week in all 64 parishes.”

People 70 years and older and a list of additional health workers, like those at outpatient clinics, were able to start accessing the vaccine at pharmacies and hospitals this week. But appointments immediately filled up as thousands flooded the phone lines of providers.

Demand has far exceeded supply after the state expanded the priority group to include the elderly and health workers. That was an abrupt change from recent weeks, when health workers were slow to take advantage of the vaccinations at some facilities, leading to a sluggish start to the state’s mass vaccination effort.

“Staying on the waitlist is good,” Kanter advised people who are eligible and waiting for the vaccine. “Waiting until the next round of allocations is made public and continue to call and make appointments ... This will get better and better each week.”

Edwards also said prisoners who meet the priority group--those 70 and older and those with end-stage renal disease--would be vaccinated. He said 489 prisoners meet that criteria, and all but 38 are in state-run facilities. The Department of Corrections has already vaccinated 279 front-line medical staff at state-run prisons.

In addition to pharmacies, the Health Department this week also told hospitals to immediately start vaccinating people beyond health workers if they have the supply. Ochsner and Our Lady of the Lake health systems were among those to start inoculating patients this week.

Dr. Catherine O’Neal, infectious disease specialist at Our Lady of the Lake, said she was battling false rumors about the vaccine that led to hesitancy among staff last month.

"The wariness of this vaccine, especially from social media myths, has been difficult, and it's hard to argue against something that has no scientific basis," O'Neal said in a media call Wednesday.

Ochsner’s Chief Medical Officer Robert Hart said on a call Wednesday that many employees wanted to wait until other colleagues received the vaccine until getting their shot.

Kanter said so far, providers have reported wasting 147 doses of the vaccine, the bulk of which, 120 doses, were due to a refrigerator at Home Health Care 2000 Inc. in Baton Rouge going out during bad weather last week, leading to doses being stored at higher temperatures than is safe.

Meanwhile, COVID-19 is surging in Louisiana, leading to nearly 2,000 hospitalizations and more disease circulating in the state than ever before.

An emotional Edwards implored residents to adhere to the restrictions in place, raising his voice at times and saying “we have to do better.”

“The hospital is full of people who didn’t believe it was that serious,” Edwards said. “Go ask them!”

The governor’s restrictions expire next Wednesday, and he is expected to hold a press conference to announce what the next stage of restrictions will look like early next week.

Acadiana’s post-holiday coronavirus outbreak is rapidly worsening, with positivity rates shooting up to July levels and showing no sign of slo…