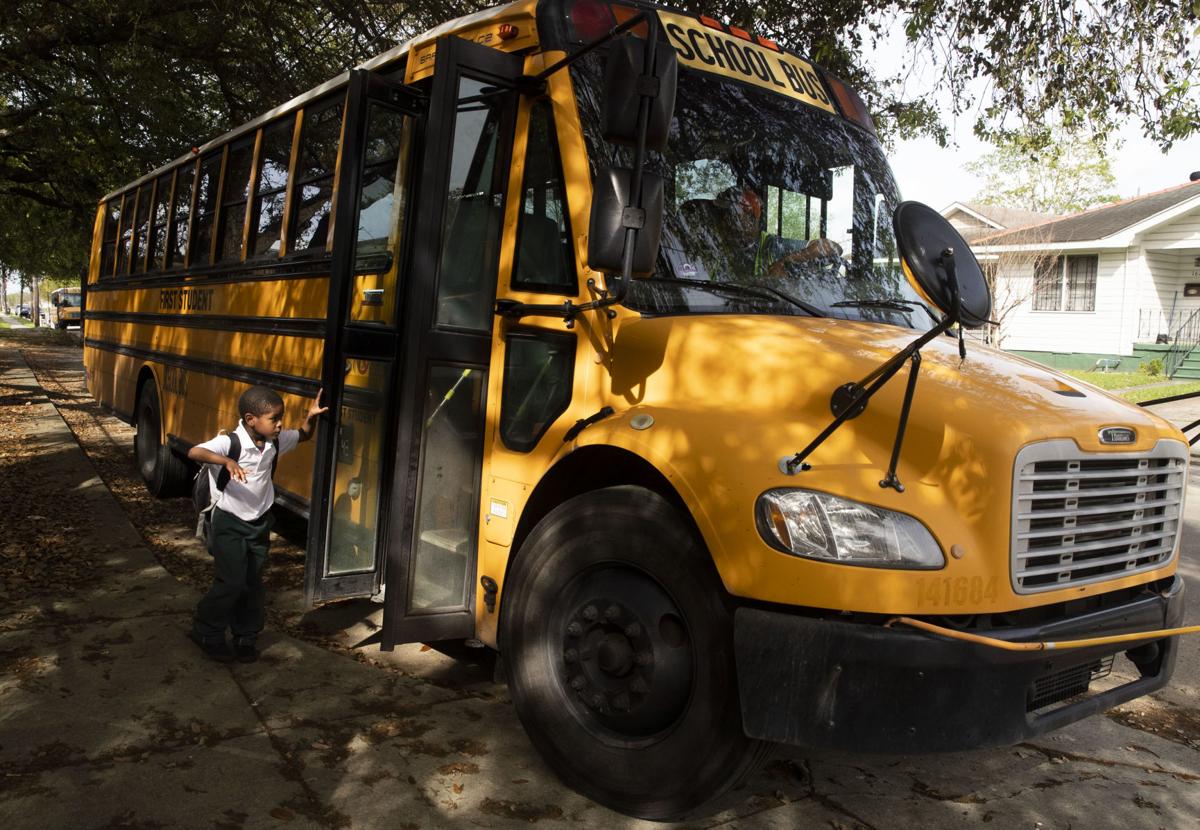 Kids get on their school bus to go home at Martin Luther King Jr. Elementary School in New Orleans, Friday, March 13, 2020. Governor John Bel Edwards ordered K-12 schools to shut down through April due to coronavirus. 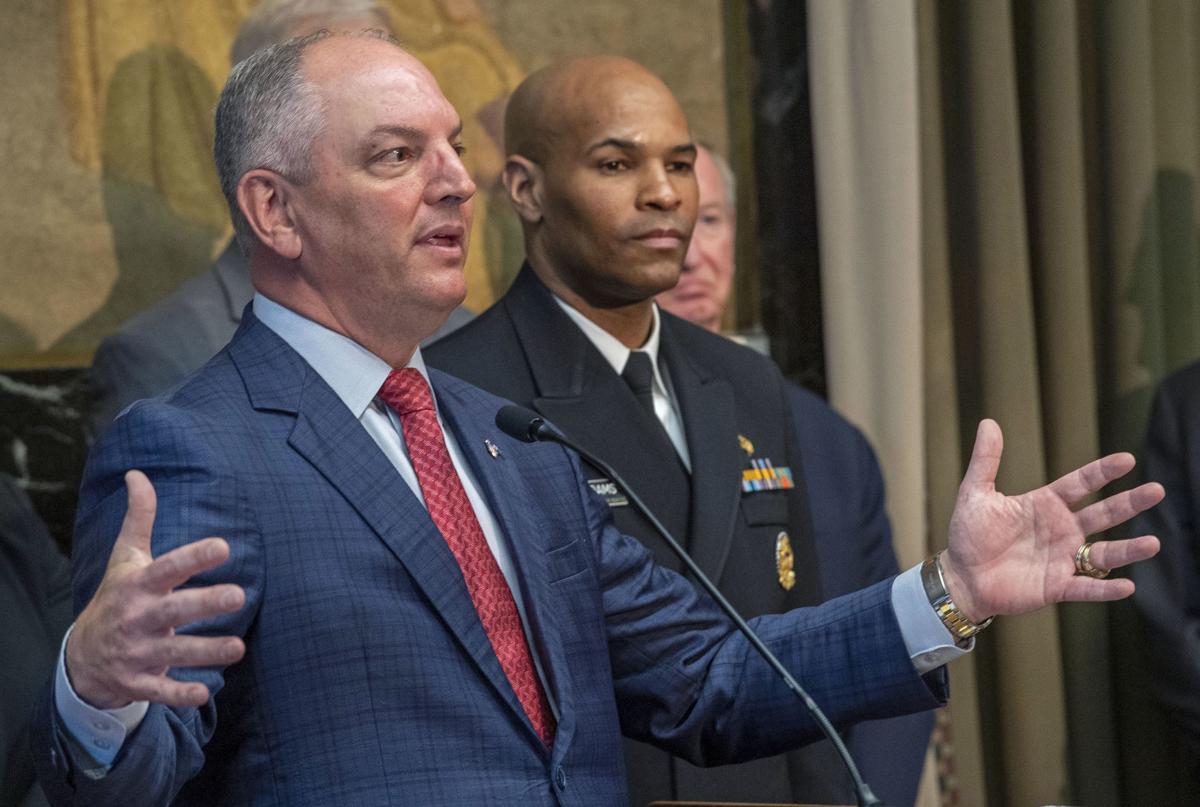 Kids get on their school bus to go home at Martin Luther King Jr. Elementary School in New Orleans, Friday, March 13, 2020. Governor John Bel Edwards ordered K-12 schools to shut down through April due to coronavirus.

Louisiana on Friday instituted staggering restrictions to limit the number of face-to-face interactions across the state and slow a rising tide of new coronavirus cases, as the virus continued to spread to new parishes and in the hotspot of New Orleans. Gov. John Bel Edwards warned citizens to prepare for a “new normal” as the state entered the next phase in the battle against the virus.

The changes came as President Donald Trump declared the pandemic a national emergency, and as the state discovered 13 new “presumptive positive” cases of the coronavirus, or COVID-19, bringing the total to 36 across eight parishes. Most cases were in New Orleans, including a “cluster” of nine cases at the uptown retirement home Lambeth House.

Louisiana's presidential primary election to be delayed because of coronavirus

The goal, officials say, is to “flatten the curve,” or spread out the number of cases over time to avoid an explosion of cases that could overwhelm hospitals and health systems. The state is aiming to protect the elderly and sick, who are most at risk for severe illness or death.

“I am concerned about the whole state,” Gov. John Bel Edwards said, during a news conference with New Orleans Mayor LaToya Cantrell and others, as he warned of the problems posed by the community spread of the virus in New Orleans.

“We have to do everything we can to get in front of this.”

The move to close down schools was the “toughest” decision made by Edwards Friday, he said. About 71% percent of public school students are listed as coming from economically disadvantaged families, raising questions about how students will be able to continue classes online, which Edwards indicated could be offered in some districts.

Schools are directed to continue providing meals or other essential services if able to do so with "appropriate social distancing measures," according to the proclamation.

“I know some difficult decisions are going to have to be made but I’m asking everyone to do everything they can to keep themselves and their families safe,” Edwards said.

School officials and teachers groups said they were working to train educators to deliver online classes during the month-long closure, which the governor said would be continually reevaluated.

But schools across the state vary widely in their ability to deliver online learning, said Mike Faulk, executive director of the Louisiana Association of School Superintendents. Faulk added district superintendents would meet to sort out other pressing issues, like standardized testing and making sure high school seniors can be assured of meeting graduation requirements.

"This thing has really blown up and magnified quickly," Faulk said.

The order also banned public gatherings of more than 250 people, a ban that extends to large church services. It does not apply to normal operations of places like airports, factories, grocery stores and hospitals, among others.

“This prohibition does apply to churches and houses of worship with congregations that exceed 250 in a single service,” Edwards said. “However, churches and places of worship can engage in multiple services and bring the number of people in them below 250.”

At the request of Secretary of State Kyle Ardoin, a Republican, Edwards, a Democrat, also delayed the state’s presidential primary election slated for April 4th until June 20th, making Louisiana the first state to move its elections in response to the epidemic.

Most poll workers are over the age of 65 and many polling places are in nursing homes, Ardoin said at a news conference in Baton Rouge. The state previously had moved elections in 2005 and 2008 amid hurricanes, as state law allows the governor to change election dates in times of emergency. Edwards, issued a public health emergency in Louisiana this week.

“This decision has been made out of an absolute abundance of caution for Louisiana's voters, voting officials and the general public as a whole," Ardoin said.

The new guidelines will allow people to be tested if they have symptoms but tested negative for the flu, said Dr. Alex Billioux, assistant secretary for the Office of Public Health. Previously, such people would need symptoms bad enough to require hospitalization, or to have traveled to a place affected by the virus or come into contact with someone who tested positive.

Officials said they were concerned about the implications of “community spread” of the virus in New Orleans, meaning the virus is spreading locally and not because of travel. The state has a limited number of test kits provided by the federal government, and limitations on who is able to receive a test has frustrated many residents. Private labs are also beginning to ramp up testing in Louisiana.

The restrictions aren’t necessarily aimed at protecting the average person, which is not at grave risk of severe illness or death from the virus. About 80% of people who contract the virus experience mild symptoms and most don’t need hospitalization.

Instead, government leaders hope to protect those most at risk: the elderly and people with existing health conditions. And state officials urged people to practice “social distancing,” avoiding close contact with people, to avoid spreading the virus to those elderly and sick people who are most at risk.

Edwards urged older people and those with health conditions to avoid going out in public if they can help it.

Meanwhile, legislative leaders told members they were not currently planning to cancel or suspend the legislative session that began this week. But they did institute new restrictions on people entering the State Capitol. Every entrant to the building will have their temperature taken at the door, and public access to committee rooms and the galleries will be limited.

The state this week also instituted steep restrictions on who can visit nursing homes, hospitals and other health care facilities, a move that bans New Orleans residents from visiting such places because of the community spread of the virus. Prisons and jails also restricted visitors.

The governor continued to urge people to wash their hands, cover their cough, avoid touching their face, disinfect surfaces and avoid close contact with others, also known as “social distancing.” If people are sick, they should stay home, he said.

“The time for serious action is now,” Edwards said. “We must come together as Louisianans and do what we do best. And that is to be good neighbors to one another. Be resilient.”