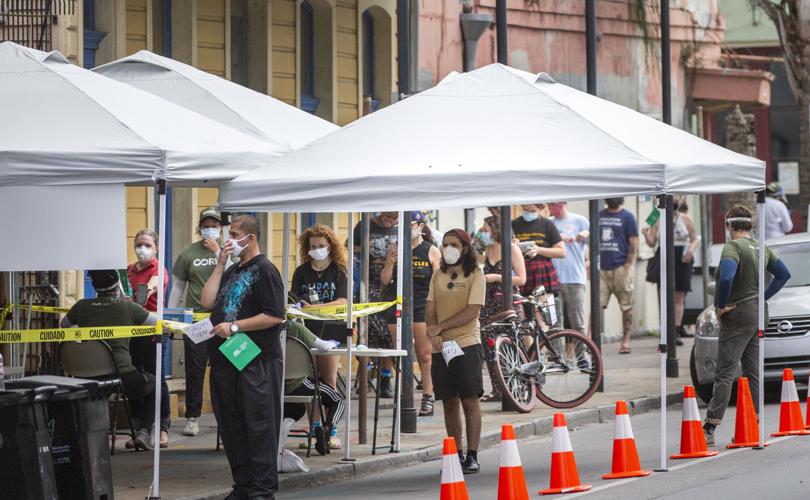 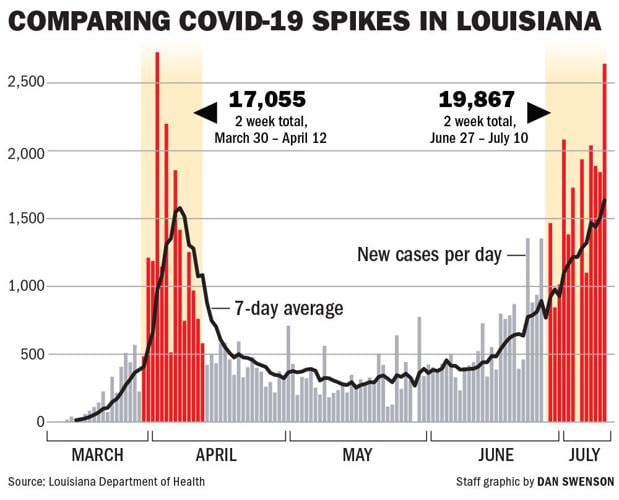 During the past two weeks, nearly 3,000 more cases have been reported than the state’s previous April spike, in as many days.

Louisiana has experienced one of its worst weeks for coronavirus metrics since the pandemic started, with spiking hospitalizations and huge numbers of new cases that can’t be explained away by increases in testing.

And unlike the first surge in cases earlier this spring, the worst of the outbreak is no longer limited largely to the New Orleans region. The Acadiana and Baton Rouge regions are being hit particularly hard by the latest wave, and the greater New Orleans area is seeing upticks after seeing better numbers in recent weeks.

“It’s statewide now,” said Dr. Joseph Kanter, the Louisiana Department of Health medical director for the New Orleans region. “While we’re not at the point that some of these neighboring states are – we’re not yet Houston or Arizona or Florida or Mississippi now – there’s no reason not to expect we will become that in short order if we don’t change course.”

Louisiana reported a near-record number of new cases Friday, with 2,642, and more cases over the past two weeks, 19,867, than at any point since the state found its first infection on March 9th.

The state is testing more now than it was earlier in the pandemic. But that doesn’t fully explain the surge: the percent of tests coming back positive has shot from 4.8% in Phase 1 of reopening in mid-to-late-May to 9.5% over the past week.

And younger people are testing positive for the virus at higher rates now, but hospitalizations are also rising throughout the state. The number of people hospitalized for COVID-19 rose by 75 Friday, reaching the highest point since May 14.

Kanter said the last week or so of data has confirmed several things: the spread of the virus is worsening in every region of the state; the percent of tests coming back positive is growing; the share of emergency room visits attributable to COVID-19-like illness is rising and “most concerningly,” hospitalizations of patients with the virus is spiking.

The state is not yet threatening hospital capacity like some other states, Kanter said, though the trajectory is worrisome. KPLC-TV in Lake Charles reported that hospitals in the southwest region of the state are concerned about the rising use of intensive care beds, used for the sickest coronavirus patients.

Dr. Susanne Straif-Bourgeois, an associate professor of epidemiology at the LSU Health Sciences Center New Orleans, noted on Thursday that the prevalence of coronavirus in the state now means it is riskier for people to go out to a bar or the like.

“I think it’s really important to consider if you really have to go to a bar or a casino or something like that,” she said. “Because there’s more virus circulating even when we compare it to April.”

Gov. John Bel Edwards, a Democrat, has not yet ratcheted up coronavirus-related restrictions in response to the surge, even as he pleads with residents to wear masks and follow other precautions. Several local leaders – in Orleans, Jefferson and East Baton Rouge parishes as well as Shreveport – have issued their own mask mandates, but the Shreveport Times reported Friday a local judge halted that municipality’s order.

Vice President Mike Pence on Friday also announced he is traveling to Baton Rouge next week to visit with Edwards about the response to the virus and meet with higher education leaders at LSU’s Tiger Stadium to discuss the return to campus and sports. The two will hold a joint press briefing.

Where are the biggest coronavirus outbreaks in Louisiana? Food processing plants, bars top the list

The Acadiana region, which has seen soaring case number, on Friday led the state’s nine health regions in new cases. Over the past two weeks, the positive rate in the region is 11.2%, above the 10% recommended guideline from the federal government.

Though cases in New Orleans had been rising in recent weeks, the city that was once was more seriously gripped by the pandemic as anyplace else in Louisiana had seen better trends than many other parts of the state since reopening began. Friday, however, 132 cases were reported in New Orleans, nearly four times as was average just two weeks ago.

Coronavirus is back 'with a vengeance' in Louisiana; officials are ramping up testing, enforcement

About 9.1% of the tests conducted on Orleans Parish residents that were reported Friday came back positive, a lower rate than in some of the current hotspots but one that is higher than it has been for two and a half months.

“That to me is the most concerning sign,” Avegno said.

The greater Baton Rouge region saw a worrying 18.5% positive rate on Friday, and the area’s spike in cases has drawn the attention of the White House coronavirus task force. The federal government supported four new testing sites – at Cortana Mall, LSU, Southern University and the state fairgrounds – that aim to do 60,000 tests over 12 days. People can get a free test regardless of whether they are showing symptoms.

That spike in cases made Baton Rouge one of three areas the U.S. Department of Health and Human Services dubbed “hotspots” in standing up testing sites. The other two were in Jacksonville, Florida and Edinburg, Texas. The Republican governors of both those states have ratcheted restrictions back up, and Texas Gov. Greg Abbott even issued a mask mandate in many parts of the state.

Kanter said cases in Louisiana can be expected to continue to rise. There are several “lags” associated with the data. For instance, it takes days for a person who is infected to begin feeling symptoms, and testing results have started to get delayed recently amid a surge of new tests nationwide. New cases reported today often reflect people who became infected weeks ago.

“The larger message right now is look around the neighborhood,” Kanter said. “Look at Texas and Florida and Arizona. If we don’t change course we’re going to be hot on their heels.”

'In the middle of a hurricane': Bar owners beat up as Louisiana stops live music indoors