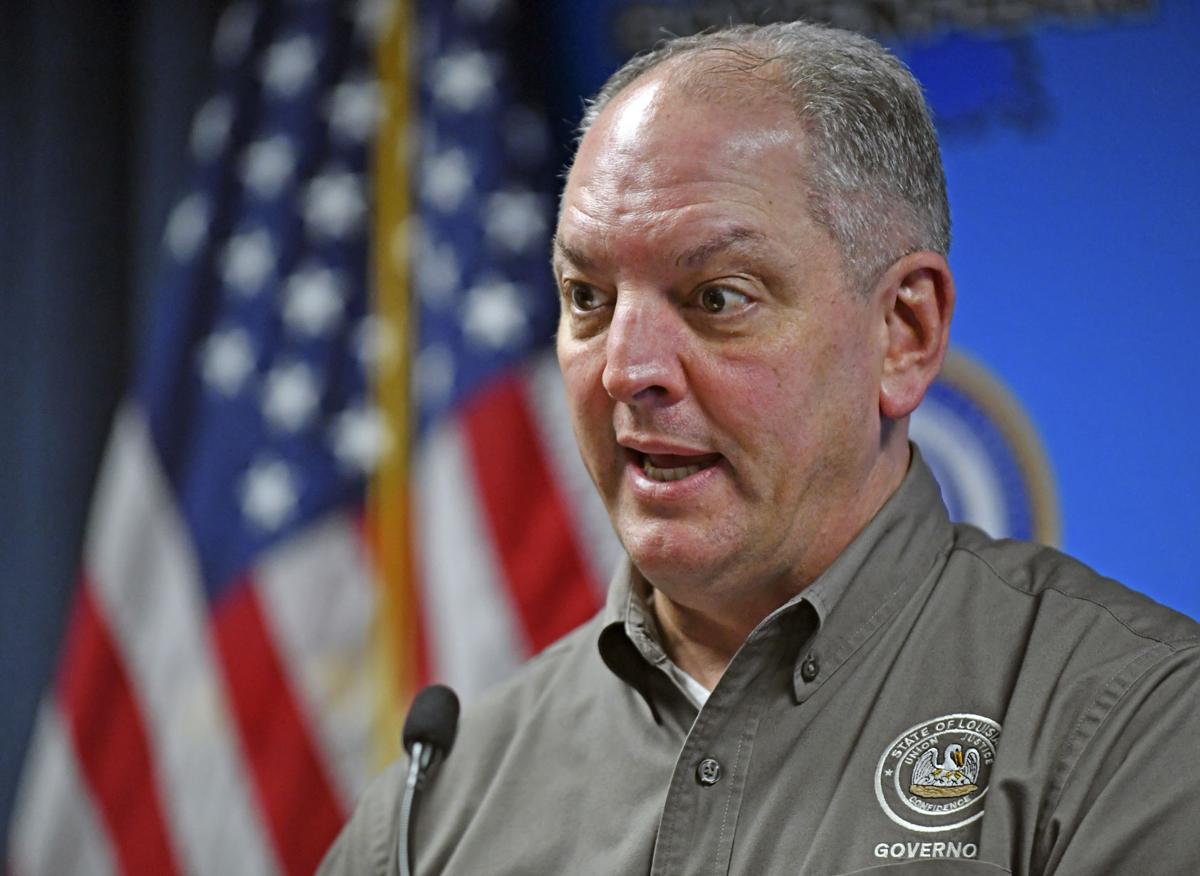 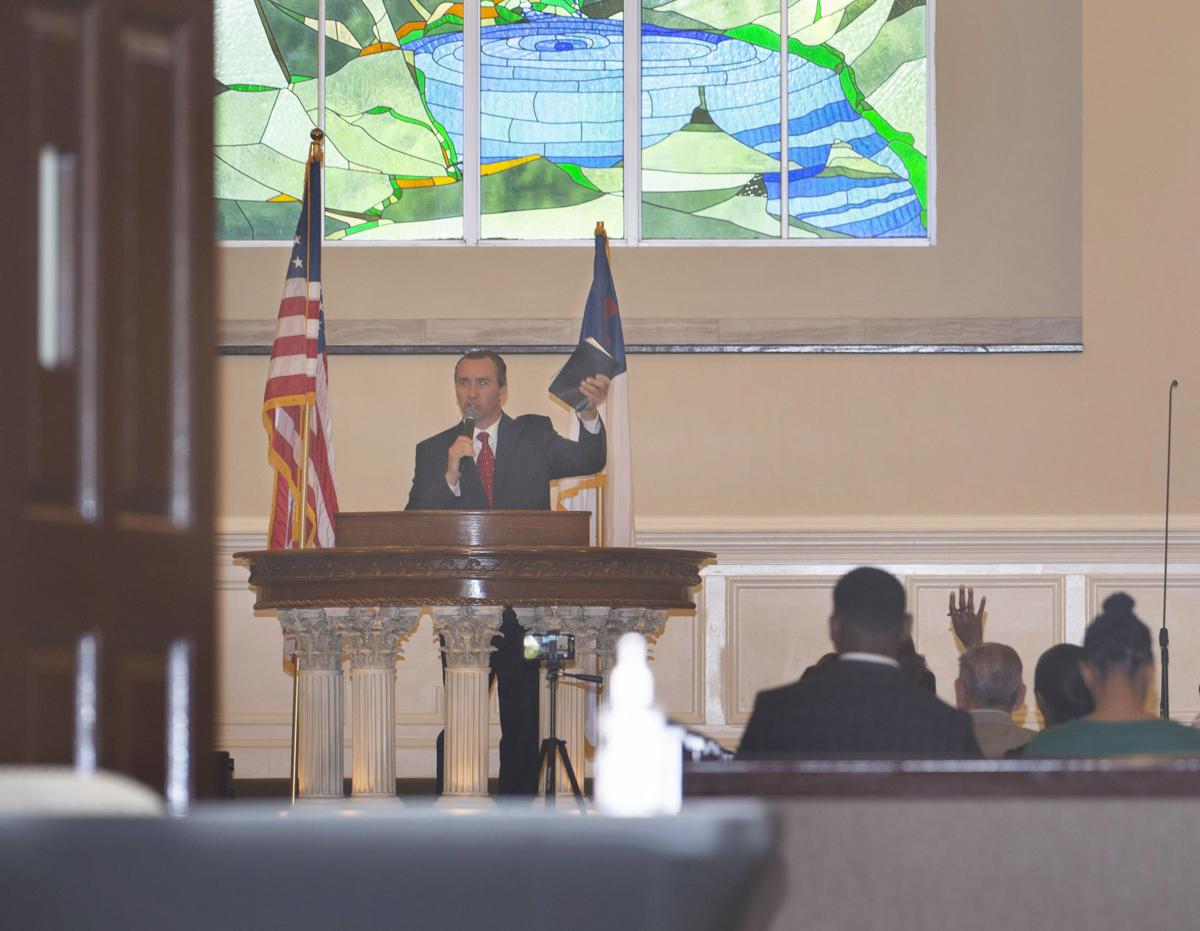 Down the road from an elementary school that had moved its classes online, across the street from a restaurant restricted to takeout, within a mile of two other churches that had canceled in-person services, a few dozen parishioners inside Life Tabernacle Church applauded the notion that their First Amendment rights are being breached.

On Thursday afternoon, the congregation was once again in apparent violation of Gov. John Bel Edwards' executive "stay-at-home" order that no more than 10 people can gather in certain areas — a directive aimed to slow the spread of the new coronavirus, which has infected more than 10,000 Louisiana residents and killed nearly 400 in the state.

Life Tabernacle Pastor Tony Spell continued to hold gatherings even after Central police issued him a summons earlier in the week for violating the order, six misdemeanor counts that each carries a maximum punishment of $500 and up to six months in parish jail.

Spell would be correct on any normal day in the United States, legal experts say. His is a common statement. It's shared by the pockets of people across the nation who are defying executive orders that inhibit their individual and community rights — rights widely considered fundamental to being an American.

Such people are partying in backyards and riverbeds. Marching in streets. Crossing state lines. Gathering in churches. All of which would be completely fair game if a global pandemic weren't crawling across the country, leaving thousands dead in its wake.

Law professors, attorneys, politicians and law enforcement reached by The Advocate all agree that the U.S. Supreme Court has consistently said the one thing more important than individual rights is the health and safety of the country's people.

In Louisiana law, "the governor is responsible for meeting the dangers to the state and people presented by emergencies or disasters," and with that responsibility, Edwards is allowed to declare a state of disaster and issue executive orders which "shall have the force and effect of law." Now, the state legislature can terminate a state of disaster at any time, if a majority of either house signs a petition, and they can even establish a period of time during which Edwards can't call for another emergency.

Since this has yet to happen, the state government agrees that during the COVID-19 crisis, the emergency is best coordinated by the governor. 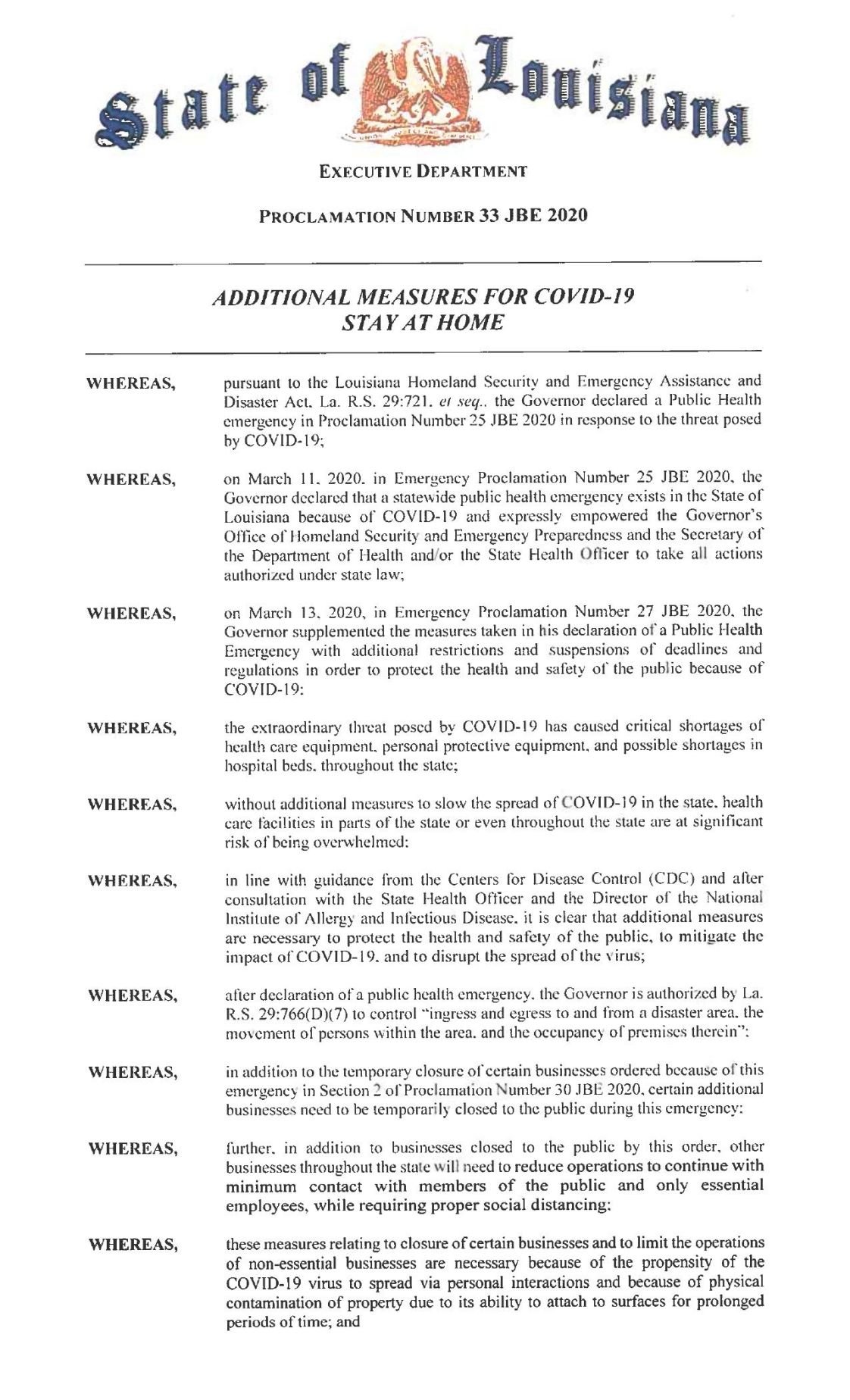 "It's more efficient," LSU law professor Ken Levy said. "It's uniform. It's easier to understand. Disagreements can be very chaotic and inefficient. I mean, it is the stuff of democracy. But in this case, we can't afford the luxury of disagreement. We need just a strong central executive to minimize the crisis, to minimize the emergency."

Even First Amendment rights can be suspended, as the Supreme Court noted in Prince v. Massachusetts (1944), saying "the right to practice religion freely does not include liberty to expose the community or the child to communicable disease or the latter to ill health or death."

Life Tabernacle is an Apostolic church, a branch of Pentecostalism. David Bernard, the general superintendent of the United Pentecostal Church International, released a statement advising churches to follow the law, that "the government has the right to enact measures for health and safety."

In many ways, Bernard said in an interview, churches are already regulated under federal building, health and fire codes.

"In the case of a national crisis, the fact that there would be some regulations on how we assemble without prohibiting us from assembling seems eminently reasonable," said Bernard, a Baton Rouge native who received a law degree from the University of Texas. "So, if someone is just trying to make a stand on defending the First Amendment, I think they're mistaken in the fact that it needs to be defended."

In Section 3 of Edwards' stay-at-home order, going to and from an individual's place of worship is still listed as an "essential" activity — along with going out to get food and medicine or visiting a family member. Church leaders have found ways to reach congregations by livestreaming services online.

There are "nonessential" businesses in Section 4 such as theaters, concert venues and malls, which are all completely closed to the public.

The governor's classification of what is essential or nonessential has been the root of debate, including within local members of the Libertarian Party, a political group with a long history of favoring hands-off government policies. 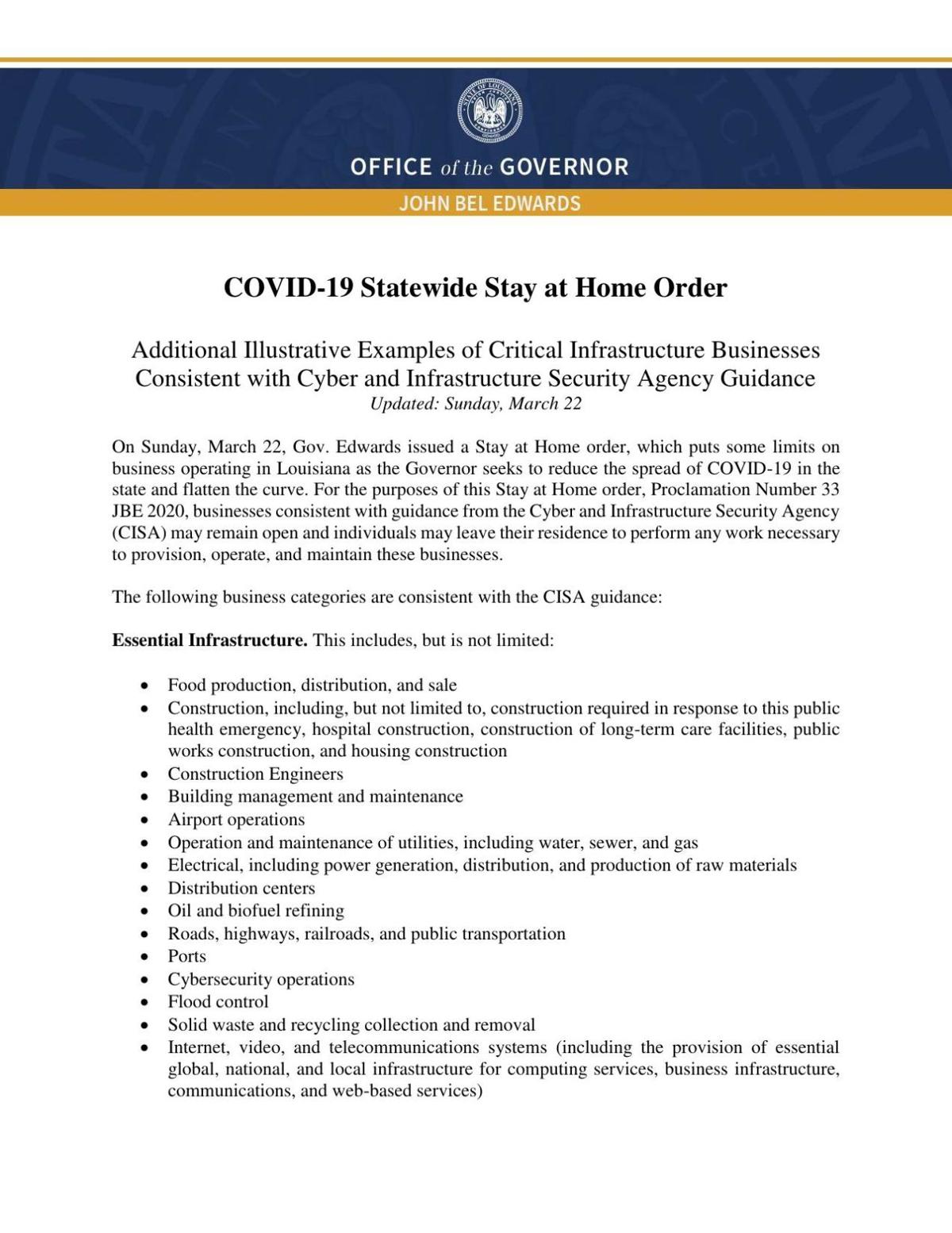 "We have a duty to our fellow man not to put their lives in danger, so we fully support the voluntary social distancing programs," said Everett Baudean, the Libertarian candidate for State Senate District 16 last year. "It starts to get a little tricky when you start to compel people to stay at home under force."

The governors of Florida and Texas have issued executive orders aimed at restricting Louisianans from entering both states. Florida has set up checkpoints to identify Louisiana residents and direct them to sites for a 14-day quarantine period. Texas has set up troopers at rest stops along the Sabine River border, an Orange County Sheriff’s Office official said, where incoming Louisiana residents are asked to voluntarily stop and be directed toward isolation sites for 14 days.

“Those things scare me more than just being asked nicely not to be social,” Baudean said.

Hundreds of Louisiana businesses have shut down in the wake of the stay-at-home order. More than 72,000 Louisiana workers filed for unemployment two weeks ago, adding to the national total of 701,000 jobs cut across the country because of the coronavirus outbreak, according to The Associated Press.

Edwards has given some businesses, like grocery stores and office buildings, waivers on the 10-person limit. Restaurants, instead of closing entirely, can sell takeout orders.

Still, portions of the public have bristled at the logic of what Edwards has deemed essential and nonessential.

"We can't go to a restaurant and sit at a table and eat a meal," Baudean said, "but we can go to the grocery store and sneeze on all the bread."

Edwards has repeatedly said his stay-at-home measures are strategically aimed at slowing the rise of COVID-19 cases so that the number of high-risk patients does not exceed the state's capacity to treat them.

The New Orleans region, Edwards said, is on track to run out of ventilators by April 7 and hospital beds April 12, and, according to the Louisiana Department of Health, there were only 15% of ICU beds remaining in East Baton Rouge as of Thursday.

The number of confirmed cases of the coronavirus in the Baton Rouge region rose to 867 on Thursday, a nearly 30% spike from the day before as …

"If we don't greatly limit social contact, we are then not going to flatten that curve to the degree that we could," Edwards said, "and then when we exceed the capacity of our health care facilities, it will be by an amount that's larger than it needed to be, and that will directly correlate to the number of people who will die."

State law enforcement officials have said they will enforce the stay-at-home order, although they've interpreted Edwards as wanting them to police with a light hand.

Last weekend, New Orleans police warned a second-line organizer to disband, and when the leader, Cecil Spencer, refused, officers waited 20 minutes for the group to disperse before citing Spencer.

Washington Parish issued a curfew Wednesday, and Chief Deputy Mike Haley said the Sheriff's Office four patrol deputies on duty will use "a gentle nudge," since people are used to their individual rights.

"If we have some knucklehead that wants to be, I guess you'd call it a repeat offender," Haley said, "then at that time, we would probably give them some sort of summons."

East Baton Rouge Parish District Attorney Hillar Moore said that, in the example of Life Tabernacle's services, "you don't want to" start charging the elderly and the children who are just attending church. The focus would be on the person generating the violation.

Moore's office has formally charged Life Tabernacle's Spell. Moore said a hearing may not be set until May since the courts are closed due to the virus.

Law enforcement and lawmakers have also questioned whether there is a loophole for nonbusiness gatherings — in homes, in nature — of over 10 people, since the enforcement section that outlines the governor's powers in emergency orders only lists "any person or representative of any firm, partnership, or corporation."

Sen. Mack "Bodi" White, R-Central, said law officers contacted him that groups of people were still hanging out on the Comite River and at the BREC park on French Town Road.

White filed a bill Tuesday that adds "individuals participating in an assembly or gathering," but with the state's legislative session in flux due to the virus, it's uncertain when that bill could be voted into law.

Edwards reinforced his belief in the state's ability to enforce his order, and on Thursday he said there's little use in arguing over his authority.

Gov. John Bel Edwards is extending the coronavirus stay-at-home order in Louisiana to April 30, he announced in a press conference Thursday.

"If Louisianans are going to insist that we enforce our way through this," he said, "then we're going to have a very, very hard time flattening the curve."