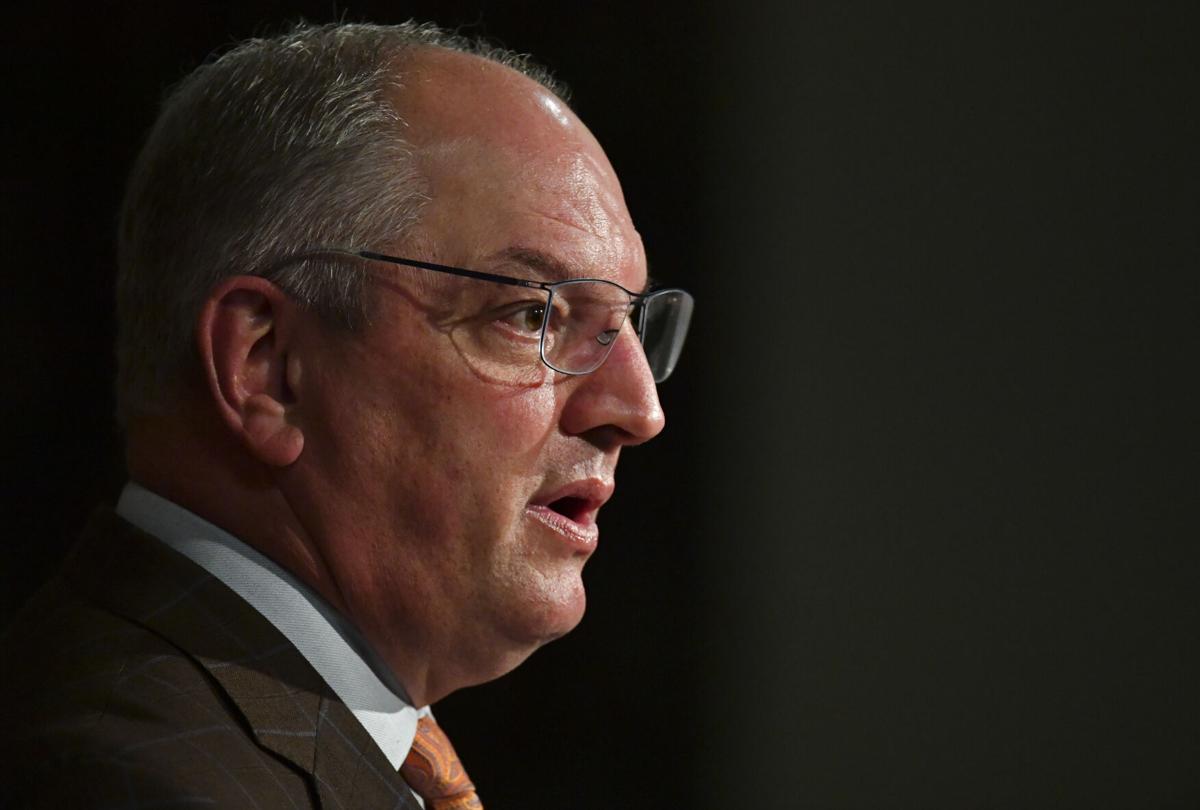 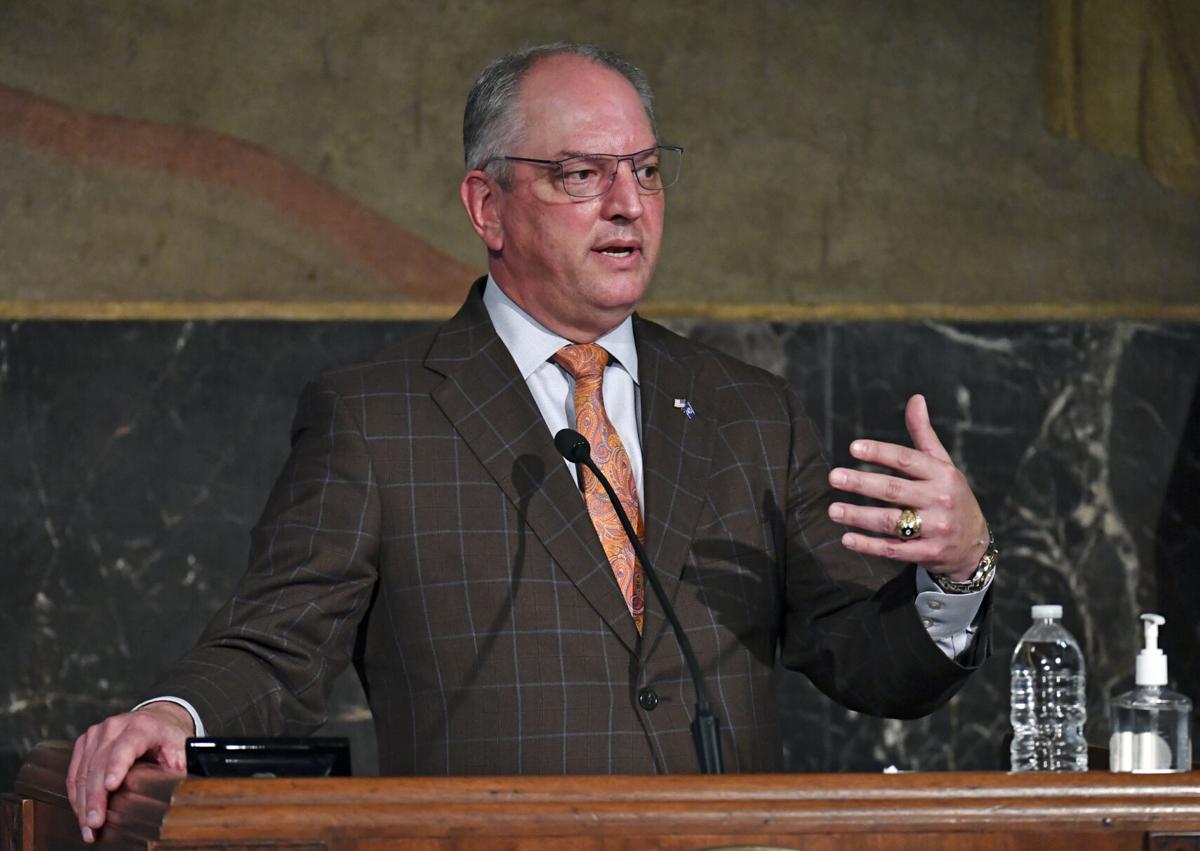 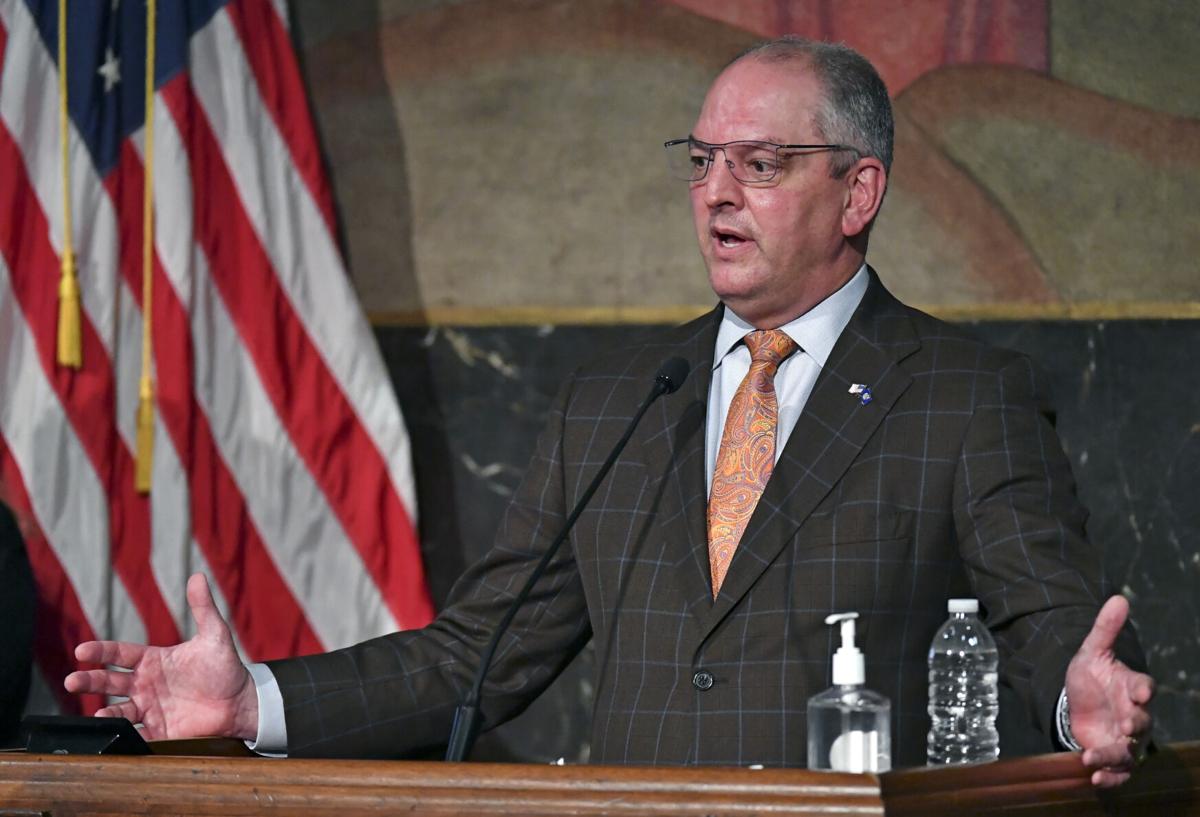 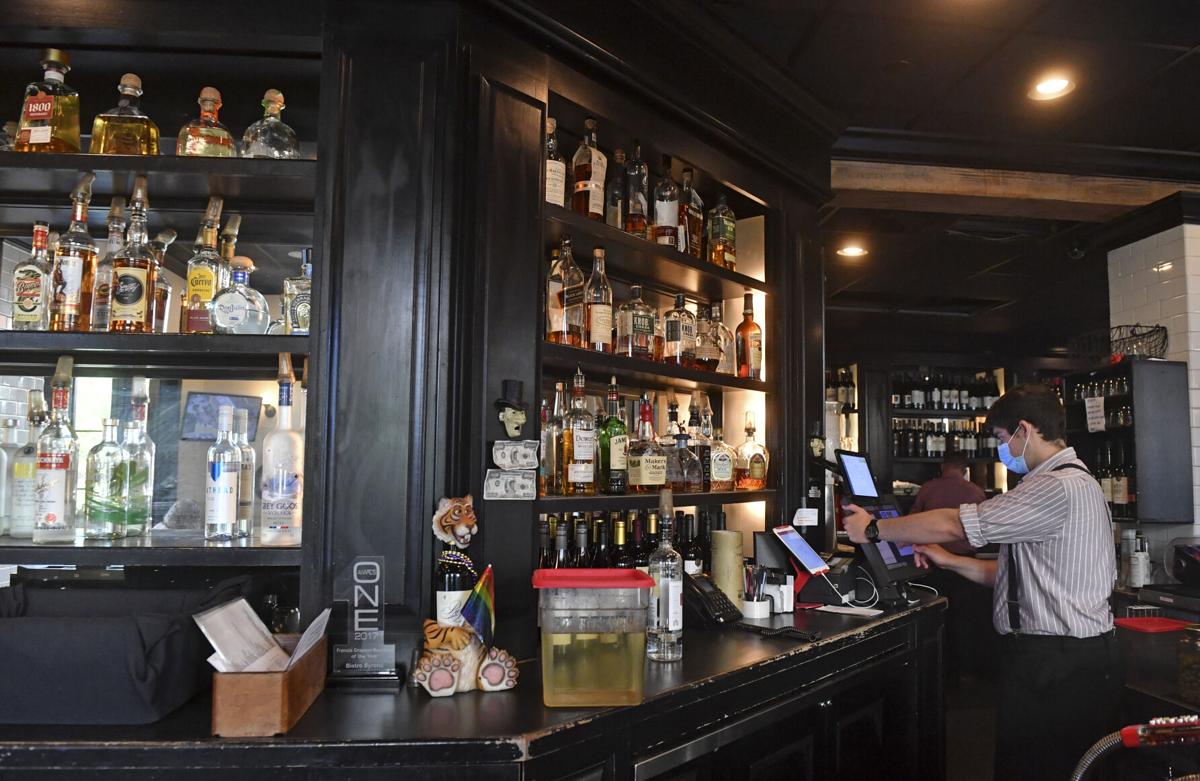 A bartender works behind the bar, Friday, July 31, 2020, during phase two of businesses reopening during the coronavirus pandemic at Bistro Byronz in Baton Rouge, La. Businesses said they were disappointed with Gov. John Bel Edwards’ decision to keep most bars closed and cut off alcohol sales at 10 p.m. as part of the ongoing effort to control the spread of the coronavirus.

A bartender works behind the bar, Friday, July 31, 2020, during phase two of businesses reopening during the coronavirus pandemic at Bistro Byronz in Baton Rouge, La. Businesses said they were disappointed with Gov. John Bel Edwards’ decision to keep most bars closed and cut off alcohol sales at 10 p.m. as part of the ongoing effort to control the spread of the coronavirus.

Facing a surge of coronavirus cases and hospitalizations ahead of Thanksgiving, Gov. John Bel Edwards on Tuesday said he would move Louisiana back into a modified version of Phase 2, ordering many bars to close and most businesses back to 50% occupancy, likely through the end of the year.

The move, which is less restrictive than the previous iteration of Phase 2, comes as hospital leaders sound the alarm that they are on track to be overwhelmed with patients soon if the trends don’t change.

The new restrictions go into effect Wednesday, the day before a Thanksgiving holiday that officials worry will power the spread of the virus to unheard-of levels as families and friends gather for in-person celebrations.

Under the new rules, gatherings will be limited to 75 indoors and 150 outdoors, or 25% occupancy at event spaces. Restaurants, retailers and other businesses will move from 75% to 50% occupancy. Bars in parishes with over 5% test positivity must close to indoor consumption unless they have a restaurant conditional permit, in which case they can operate at 50%.

Louisiana hospitals: We need your help in keeping infections down at Thanksgiving

Edwards said in his press conference announcing the changes that Louisiana is "in for a rough patch."

“There are no magic tricks to be worked here. The only way you stop the surge is by these restrictions and mitigation measures,” he added. “If somebody had presented me another option, a better option about flattening the curve, I would have taken it….It doesn’t exist.”

The new restrictions effectively close down bars that don’t serve food in East Baton Rouge, Jefferson and most other parishes, though the new order allows them to operate outdoor seating of 50 people or fewer. Only a handful of parishes, including Orleans, St. Bernard, Plaquemines and some other rural parishes still have low enough positivity rates to keep bars open, according to Health Department data, though some are on track to lose that ability Wednesday when the data is updated. Jefferson, Lafayette, Caddo and East Baton Rouge parishes have positivity higher than 5%.

While the order will be in effect until late December, the governor indicated the restrictions would stay in place through the end of the year. They start Wednesday.

The governor also said more restrictions could be in the offing if the trends don't improve soon.

Big spike in Louisiana new unemployment claims in mid-November a mystery; is it a glitch or fraud?

Edwards avoided wading into some of the more politically fraught parts of his restrictions, leaving settings like churches and football undisturbed. The governor didn’t touch Tiger Stadium, where LSU has continued to welcome tens of thousands of fans -- the school is allowed to host up to 25% capacity -- to home football games. And the order doesn’t cancel high school football as teams head into playoffs. Instead, high school football stadiums will be allowed to welcome 25% of fans into the stadiums. Some parishes had gained the ability to fill 50% of their stadiums before the new restrictions.

He also left decisions on schools to local school districts. And churches will remain at 75% capacity.

Coronavirus is disrupting the holidays; here's how New Orleanians are adjusting their gatherings

These businesses must adhere to a capacity of up to 50% with social distancing and mask mandates:

Edwards is also encouraging business owners to use remote work as much as possible.

After avoiding the unprecedented wave of cases and hospitalizations happening across the country for weeks, Louisiana has firmly entered the fall surge. Weekly new cases have soared to north of 11,000 as of Tuesday, up 155% from the case total of about 4,300 for the same period a month earlier. The percent positivity--the rate of tests coming back positive--is up about 85% over the same period, indicating the cases can't be explained away by increases in testing.

Dr. Joe Kanter, the state’s top coronavirus response official, went through data showing each region of the state is seeing alarming rises in cases, hospitalizations and other trends.

“What we’re seeing now is as concerning as it has ever been,” he said. “Every region across the state right now is experiencing very similar increases.”

Kanter said hospital leaders have already relayed stories of capacity--particularly with staff--being stretched thin. If that trend continues, officials worry people with health ailments besides COVID-19--like heart attacks, strokes and other issues--won’t be able to get timely care.

And unlike during previous surges, Louisiana’s newest wave comes as the rest of the country also sees unprecedented levels of the virus. That means hospital workers who traveled here from outside the state likely won’t be available this time, Kanter said.

The White House Coronavirus Task Force has sent Louisiana increasingly dire reports about the surge. This week, the task force said "all states and all parishes must flatten the curve" to sustain health capacity, and said "significant behavior change" is required to tamp it down.

As Louisiana reverts to modified Phase 2, here's what that means for sports, bars, events, more

"Ensure masks at all times in public, increase physical distancing through significant reduction in capacity in public and private indoor spaces, and ensure every American understands the clear risks of ANY family or friend interactions outside of their immediate household indoors without masks," the report said.

Hospital leaders in Louisiana have warned the level of infections is on course to overwhelm health facilities around the state. Last week, as Edwards and other leads pleaded with people not to hold large Thanksgiving gatherings, Dr. Christopher Thomas, a critical care physician at Our Lady of the Lake, said overworked nurses and other health workers are quitting and the hospital doesn’t have the capacity to weather another surge like the one seen in the summer.

But Straif-Bourgeois said the restrictions could see diminishing returns, as increasing numbers of people experience “COVID fatigue” and host gatherings at their homes.

“There’s this big COVID-19 fatigue and I think it’s very difficult to come to people there's a very high prevalence of disease in Louisiana so you’re at a much higher risk to get it and infect someone else,” she said. “People are tired.”

“People really don’t think too much about it anymore, I’m afraid. Holidays are coming up, Thanksgiving, Christmas, everyone wants to get together.”

Paul Salles, president of the Louisiana Hospital Association, wrote in a letter to news outlets that “while we can create additional beds and repurpose hospital floors, it becomes extremely difficult to find and train the caregivers needed to properly treat patients when there is an unmitigated spread of the virus in our communities.”

The restrictions come as Edwards, a Democrat, continues to face opposition from Republican officials in Louisiana. GOP members of the state House sent him a petition in late October ordering him to cancel all of Louisiana’s virus restrictions--which would have allowed bars, restaurants and other businesses to operate at 100% capacity with no mask requirement. A judge struck down the move as unconstitutional, handing Attorney General Jeff Landry a defeat in court.

On Monday, Republican state Rep. Larry Bagley called a hearing of the House Health and Welfare Committee to hear parents complain their children are being required to wear masks and are seeing their sports seasons limited because of the restrictions. Several questioned whether masks are helpful. The U.S. Centers for Disease Control and a host of health experts have repeatedly said wearing cloth face coverings limit the spread of the virus.