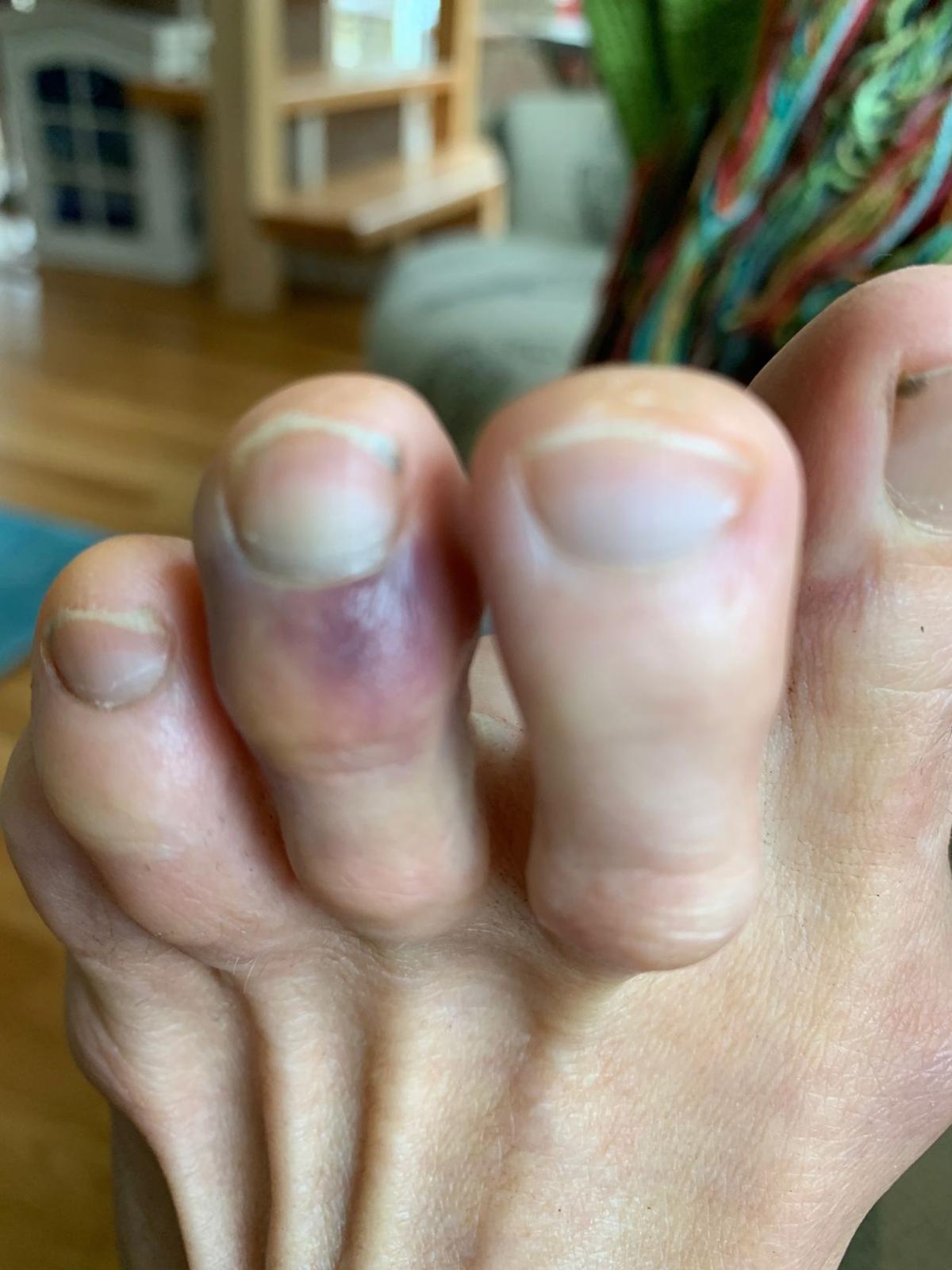 Doctors are connecting purple-color toes, like Karin Shetler's, to the coronavirus. 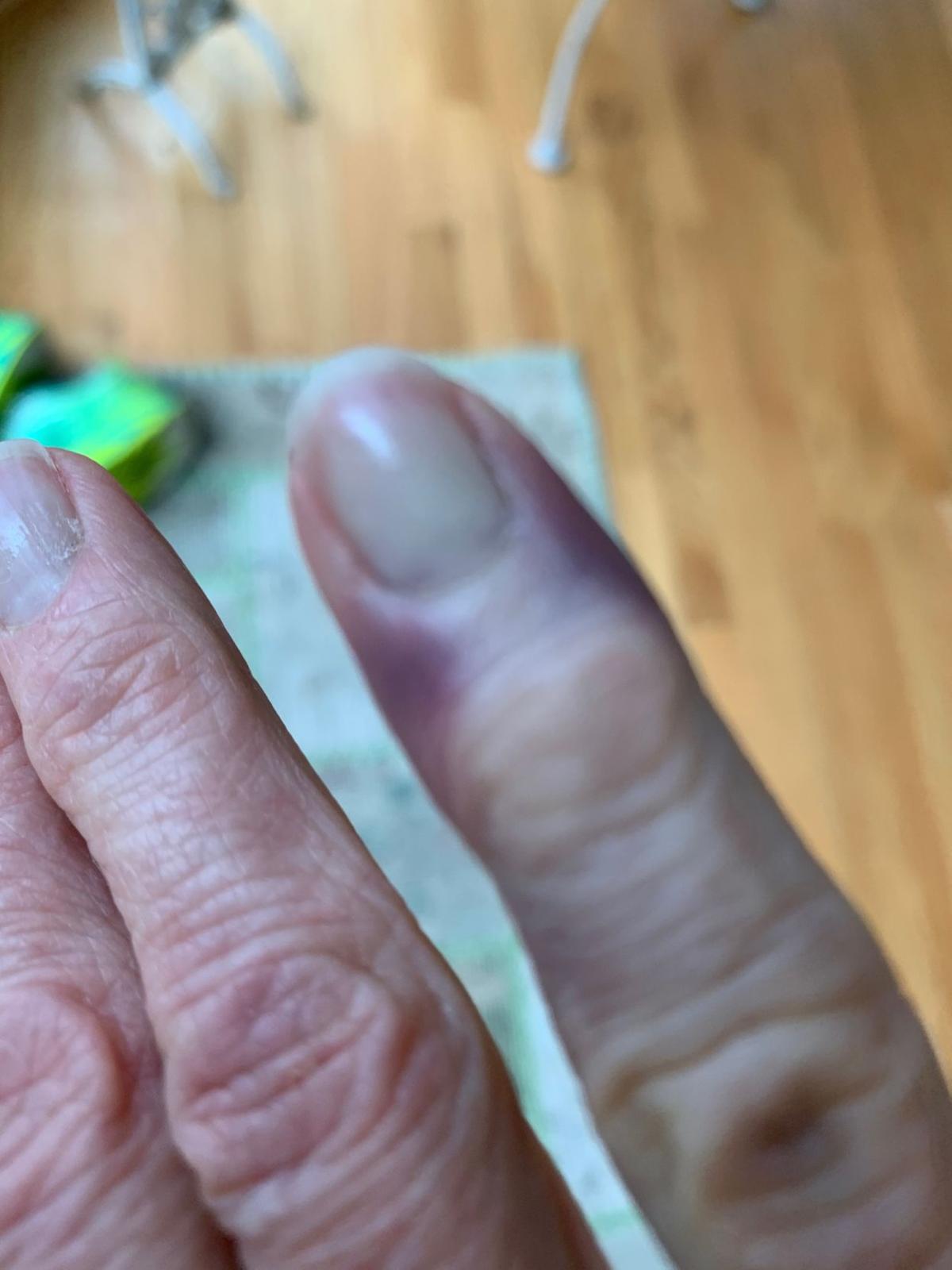 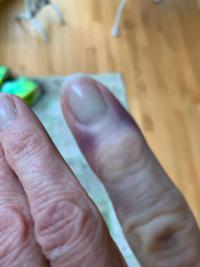 Weeks after recovering from the coronavirus, Karin Shetler's toes and then her fingers staring turning purple, which doctors say is post-viral inflammation from COVID-19.

Doctors are connecting purple-color toes, like Karin Shetler's, to the coronavirus.

Weeks after recovering from the coronavirus, Karin Shetler's toes and then her fingers staring turning purple, which doctors say is post-viral inflammation from COVID-19.

On April 7, Karin Shetler awoke in the middle of the night to a toe that was throbbing violently. She threw back the covers to reveal her purple-colored middle toe.

“I wondered whether I had somehow broken my toe,” said Shetler. “I iced it, not understanding what it was, and called my physician sister in New Orleans the next morning.”

Shetler asked if it might be gout. It wasn't.

Her purple toe was part of her previous diagnosis of COVID-19, caused by the new coronavirus.

Even though her symptoms from the infection had subsided, she now had a post-viral inflammation that doctors are beginning to see all over the country. Photos of Shetler's toe were sent to Dr. Erin Boh, chairman of the Department of Dermatology at Tulane University School of Medicine.

Boh was already familiar with the issue.

“It has absolutely the same look as something called chilblains, which is an inflammation that occurs in fingers and toes in response to cold,” said Boh. “Now, however, we are seeing it as a post-viral response in patients who’ve had COVID-19. We usually see this in people who have brisk immune systems which successfully fight off the virus. However, when the immune system gets cranked up like this, sometimes it doesn’t shut off and goes a little crazy. We don’t really know just how widespread this particular response is, but 20% of COVID patients have some sort of skin manifestation associated with this new coronavirus.”

The condition has been referred to as COVID-toe, and can affect one or all 10 toes and fingers.

“This time, my right arm became achy, and then extremely painful,” said Shetler. “Hours later I was driving and noticed my pinky finger was becoming numb and turning purple.”

Many people who get these conditions never connect it to COVID-19 because they are symptom-free and never realize they’ve been infected, Boh said. Only subsequent antibody testing reveals they have indeed been exposed to the virus.

“Whether it’s an inflammatory response or little viral particles causing the problem is unclear,” said New Orleans dermatologist Dr. Mary Lupo. “The good news is that no one has lost toes or fingers over this. We’re seeing this in the extremities because it’s the end of the line in the circulatory system. So, it could even be seen on the ears and nose, as well.”

The physicians said they're not certain why these chilblain-like symptoms are associated with COVID-19, but noted one of the hallmarks of the virus is inflammation. That can show up as skin lesions or rashes such as those now being seen in children, which doctors believe may be caused by an inflammation of their blood vessels. Dubbed pediatric multi-system inflammatory syndrome, it has caused some children to go into heart failure.

While plenty of cases of COVID-toe are showing up in New York and California, where coronavirus outbreaks have been large, fewer cases are being seen locally.

Boh said it's probably because many people, and doctors, don't realize it's related to COVID-19.

Those who get it probably just think it's a skin disorder, take a pain reliever and it goes away, Boh said.

She also theorized that south Louisiana may have a different strain of the virus — there have been multiple mutations.

But mostly, Boh said, she thinks people here are hesitant to go to the doctor because of coming in contact with infected people so they're living with it.

“Until we have biopsies where we truly understand what’s happening with the blood and the skin, we’re surmising it’s a dermal vascular response,” said Lupo. “But the thing that makes this virus so scary is that we haven’t been able to put it in a box, describe it and know what to expect.”

Doctors say if you have purple toes or fingers, it’s time to get an antibody test to see if you’ve had COVID-19.

Health officials are reporting 42 new positive cases of coronavirus in East Baton Rouge, bringing the parish total to 2,487 on Wednesday.