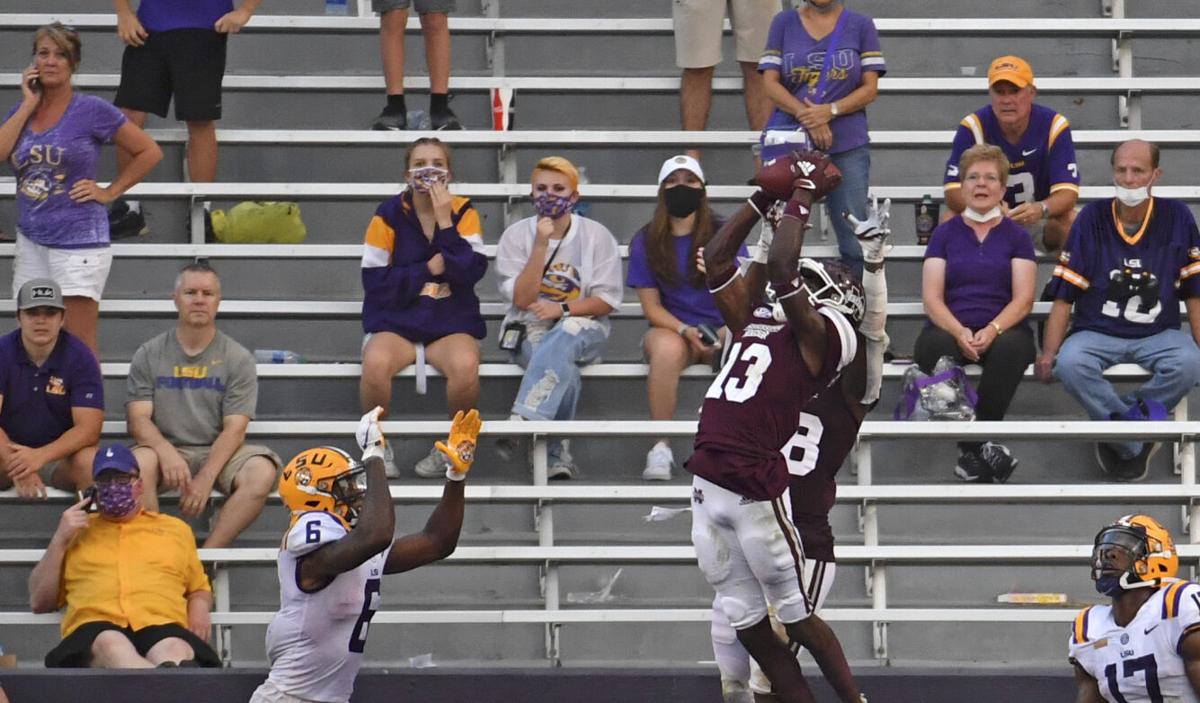 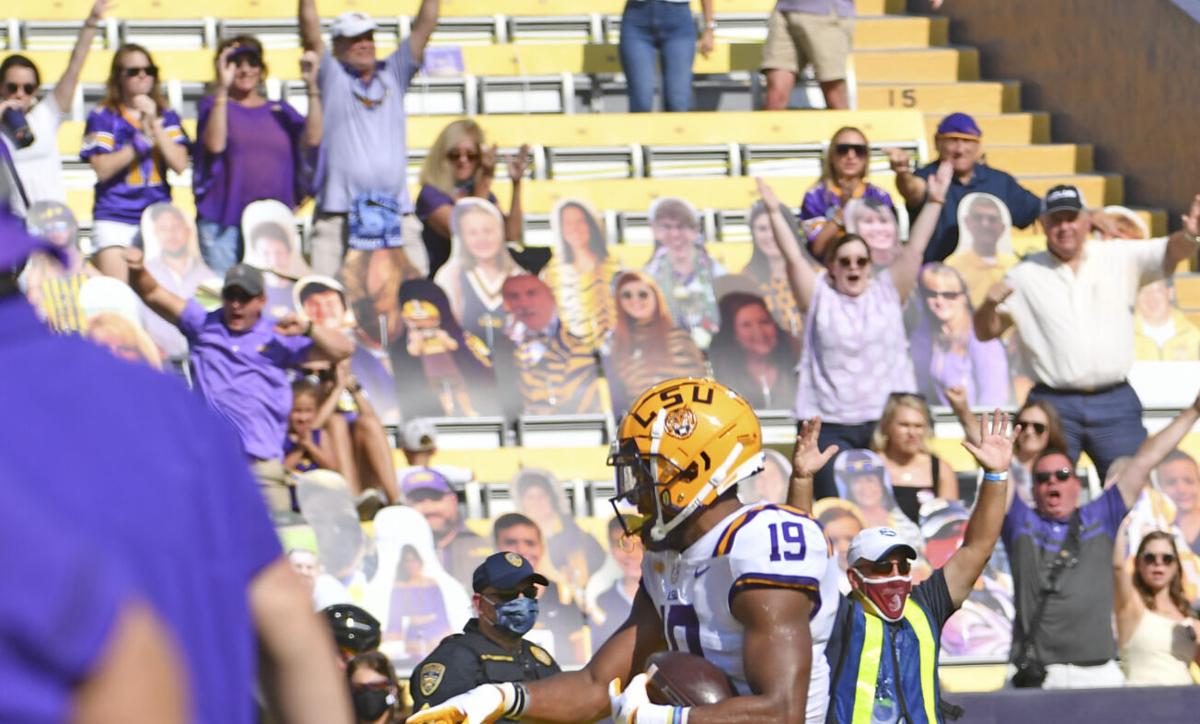 Fans cheer as LSU linebacker Jabril Cox (19) runs into the end zone on a pick six against Mississippi State on Saturday, September 26, 2020, in Tiger Stadium. 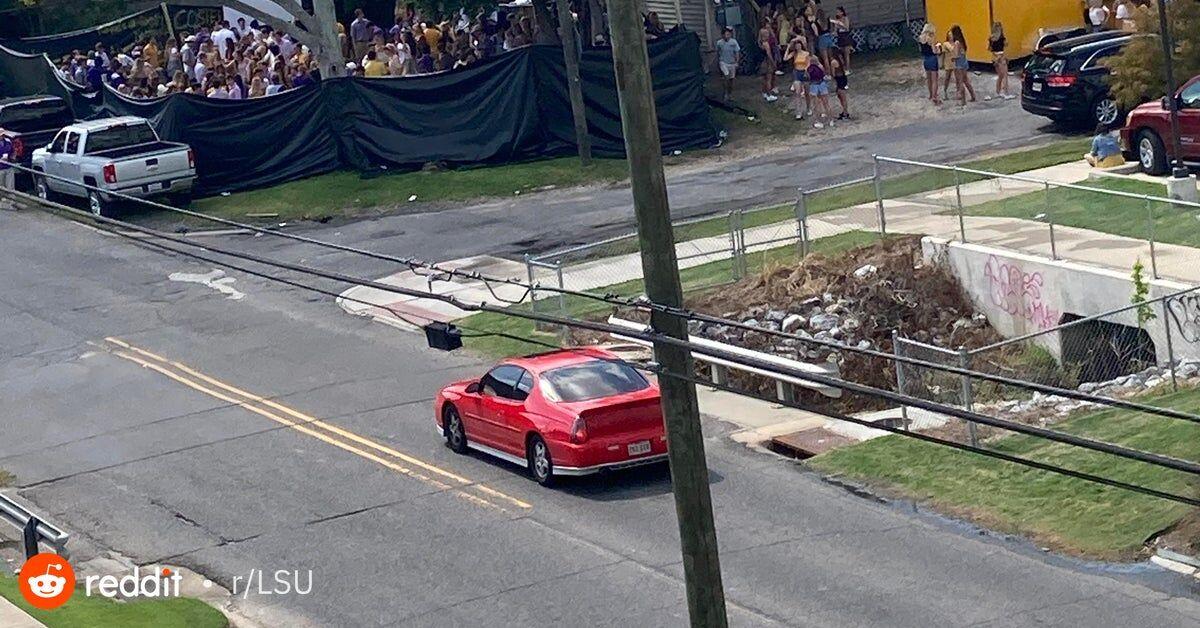 This off-campus tailgate party was in full swing shortly before midday Saturday, Sept. 26, 2020, at the corner of East Boyd Drive and Dodson Avenue in Baton Rouge. An organizer of the party said Monday the event had fewer people than the 250-person limit in place under the state’s Phase 3 restrictions and people attended at their own risk. This photograph was posted originally on Reddit Saturday and The Advocate has obtained permission to publish it.

Fans cheer as LSU linebacker Jabril Cox (19) runs into the end zone on a pick six against Mississippi State on Saturday, September 26, 2020, in Tiger Stadium.

This off-campus tailgate party was in full swing shortly before midday Saturday, Sept. 26, 2020, at the corner of East Boyd Drive and Dodson Avenue in Baton Rouge. An organizer of the party said Monday the event had fewer people than the 250-person limit in place under the state’s Phase 3 restrictions and people attended at their own risk. This photograph was posted originally on Reddit Saturday and The Advocate has obtained permission to publish it.

LSU officials plan to promote greater mask-wearing inside Tiger Stadium following Saturday's football home opener that disappointed state leaders, not because of the final score but because not all fans in the stands kept their masks on.

Ahead of the Tigers' season opener Saturday, LSU announced a mountain of health and safety measures related to the coronavirus pandemic, including capping fan attendance to 25% capacity at Tiger Stadium, banning tailgating and requiring face-coverings for fans unless they were eating or drinking.

Images captured by The Advocate and television broadcasts of Saturday’s game against Mississippi State show, in some cases, little mask-wearing among the more than 21,000 who attended.

Some even had their masks lowered around their chin and neck.

LSU’s Senior Associate Athletic Director Robert Munson said that he, too, noticed some fans removed their masks in the stands, but noted that many of them didn’t move from their assigned seats, which were physically distanced from other groups who went to the game together.

“We absolutely want our fans to wear masks in our stadium. It’s the mandate of the state,” he said. “We need to get better at wearing masks in the stadium.”

The school didn’t have to enforce its ban on tailgating because no one showed up to try to do so, and Baton Rouge Police said they didn’t receive any calls about large gatherings over the weekend.

At least one off-campus tailgate party was captured on social media, however.

A photograph taken shortly before noon Saturday and posted on Reddit shows a large crowd in the yard of a multi-unit home at the corner of East Boyd Drive and Dodson Avenue.

In the photograph, many at the party are crammed together in an area cordoned off by temporary fencing made of black plastic sheeting, and few have masks on.

A young adult who lives in the home and helped put on the party said Monday that fewer than 250 people were at the party and they were outside. He contended the party complied with the state’s social gathering limits under Phase 3.

Under state and city-parish rules, public gatherings of no more than 250 people, or 50% of capacity, are allowed when social distancing isn’t possible.

The city-parish also has a mask mandate when people perform public activities, however, and federal health guidance cited by the city-parish recommends masks in public settings, especially when social distancing is hard to maintain.

When asked if he thought it was a good idea to have that many people close together without masks on, the man, who would not give his name, said “people came at their own risk.”

He said people who needed a bathroom used a portable toilet around the corner, not in the house.

Other parties have been held at the home before, the man said, noting that bars have been closed and people still have to live in Baton Rouge while they go to school and work.

The man said he already has antibodies to the coronavirus because he had been infected over the summer at work.

Mark Armstrong, city-parish government spokesman, said police respond to complaints as they are made and try to talk to people about public gatherings, sometimes even breaking them up.

Saturday’s game marked the largest gathering in Louisiana since the coronavirus outbreak intensified in March, and came days after Dr. Deborah Birx, coordinator for the White House Coronavirus Task Force, met with state and LSU officials.

Following a series of roundtables, Birx stressed the importance of mask-wearing and social distancing, attributing those to driving down infections. “Louisiana made changes that saved people’s lives,” she said Wednesday.

LSU Interim President Tom Galligan, while speaking to reporters after Birx’s visit, said the school will enforce its health measures “persuasively and gently,” but would take other actions if needed.

While expressing disappointment about some fans not wearing masks at Saturday’s game, the governor’s spokeswoman, Christina Stephens, said Monday that other mitigation measures LSU implemented for the game helped ensure safety for the community. She added that the state plans to work with the school to ensure more mask-wearing during the Tigers' next home game, including when fans are in their seats.

“The fans themselves play a big role in this and, if we are truly one team, fans attending the games in person will comply with all of the rules,” Stephens said.

Universities that have opened for in-person fall semesters have struggled to contain the virus, which mainly spreads through respiratory droplets that can be spread to others from coughing, talking or even breathing. Several health officials say the risk of spreading the virus is lower, to some degree, when outside compared to close-quarters inside.

After 'embarrassing' loss to Mississippi State, LSU faces a long list of corrections

After Tiger Stadium emptied, after the field had cleared, after the hopes of another undefeated LSU football season crumbled under a 44-34 los…

Out of 39,000 students and staff, 990 students and 43 employees reported testing positive for the virus since mid-August, according to the school's public dashboard.

Weekly reported cases have been declining since its highest week in late August when 182 cases were reported. But the timing of when a person tested positive and whether they were on campus isn't reflected in the data.

LSU dropped its season opener to Mississippi State by 44-34, ending the Tigers winning-streak that extended from 2018.

Munson said LSU plans to make a few tweaks for fans attending the team’s Oct. 15 home game against Missouri, including more in-game reminders about mask-wearing and adding more people to monitor the crowds.

“Overall, we were very pleased with how our fans responded to the multitude of measures,” Munson said. “We asked a lot of them.”

LSU allowed a Southeastern Conference-record 623 yards passing against Mississippi State on Saturday in Tiger Stadium, and while preventing su…