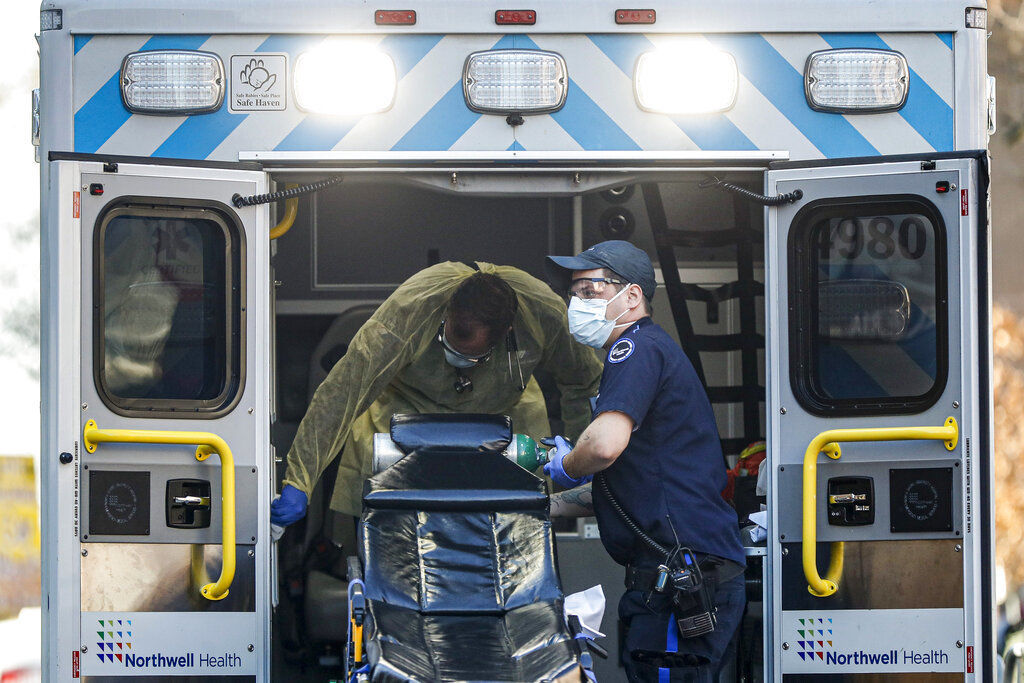 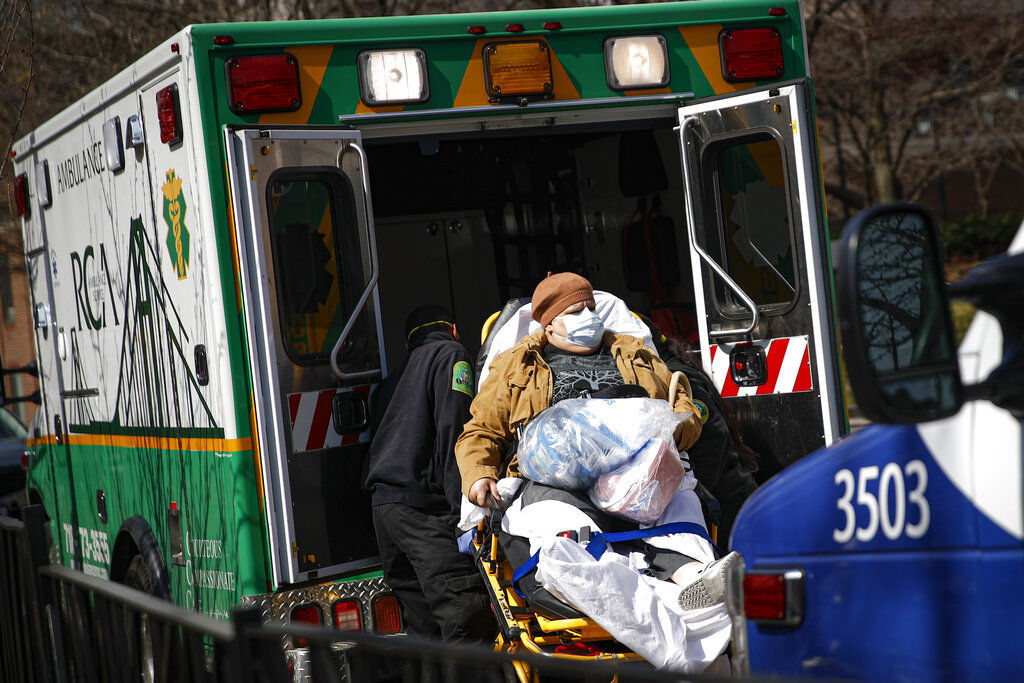 A patient wears a protective face mask as she is loaded into an ambulance at The Brooklyn Hospital Center emergency room, Wednesday, March 18, 2020, in New York. Anticipating a spike in coronavirus patients, New York City-area hospitals cleared beds, set up new spaces to triage patients and urged people with mild symptoms to consult health professionals by phone or video chat instead of flooding emergency rooms that could be overrun. (AP Photo/John Minchillo)

A patient wears a protective face mask as she is loaded into an ambulance at The Brooklyn Hospital Center emergency room, Wednesday, March 18, 2020, in New York. Anticipating a spike in coronavirus patients, New York City-area hospitals cleared beds, set up new spaces to triage patients and urged people with mild symptoms to consult health professionals by phone or video chat instead of flooding emergency rooms that could be overrun. (AP Photo/John Minchillo)

A newborn baby was added to the growing list of Baton Rouge coronavirus deaths Monday — one of the youngest lives lost amid the global pandemic — after her mother tested positive for the virus and went into preterm labor while experiencing severe symptoms.

The child's death raises significant questions about how the novel coronavirus impacts pregnant women, which remains largely unknown. This case could have widespread implications for future research as experts around the world scramble to compile and interpret data on the subject.

Test results for the child are still pending, but investigators concluded her death was the direct result of her mother's coronavirus diagnosis, which caused her to deliver the child, East Baton Rouge Coroner Dr. Beau Clark said during a virtual press conference Monday morning. He called the episode a "a very tragic case."

The mom remained hospitalized on a ventilator. Officials weren't able to provide additional information about her condition. The child was delivered more than three months early, after just under 22 weeks of pregnancy, Clark said.

The respiratory distress associated with COVID-19 can cause dangerously low oxygen levels, which trigger the need for a ventilator. Clark said that oxygen deficiency is likely what caused the mother to go into premature labor, and also made it even more difficult for the child to survive once delivered. Some babies born prematurely at 22 weeks can survive under normal circumstances, though most aren't able to, Clark said.

The coroner said that even if test results show the child had not contracted the coronavirus, her cause of death would not change — it would still be considered "COVID-related."

The newborn was one of seven Baton Rouge residents who died from coronavirus over the weekend, the coroner's office said. All the others were older adults with underlying health conditions.

There are no other reported cases of babies who haven't survived after being delivered prematurely because of coronavirus complications, though recent infant deaths in at least two other states have been otherwise linked to the virus, according to preliminary investigations.

Illinois public health officials announced March 28 the death of a 9-month-old baby who had tested positive for coronavirus, calling it the first such case, though it appears the final cause of death is still pending. Then Connecticut officials announced last week that an infant, just six weeks old, had also tested positive for coronavirus after being pronounced dead at a hospital. That investigation also hasn't produced a final ruling, according to local media reports.

The virus is known to impact older people much more severely than children, though scientists are still trying to understand what exactly makes certain patients more vulnerable. Experts agree the bottom line is that pregnant women and their unborn babies remain largely a mystery.

A report published in February from the World Health Organization found that pregnant women don't appear to be at higher risk for severe disease from coronavirus.

However, adverse infant outcomes — including preterm birth — have been reported, according to the American College of Obstetricians and Gynecologists. The organization shared those findings on its website but qualified them with a note that the "information is based on limited data and it is not clear that these outcomes were related to maternal infection."

What also remains unclear is whether the virus can be transmitted from mother to child in the womb, which is called vertical transmission and requires the virus to pass through the placenta.

Clark said investigators at the state and federal level are looking to determine whether that could have occurred in the Baton Rouge case, which he said could have "huge ramifications" from a research perspective. Some studies have been conducted in China that suggest vertical transmission isn't possible, but haven't been able to rule it out either.

"We really have limited pregnancy specific data on COVID-19, but we are learning more each day," said Renee Antoine, Louisiana's maternal and child health director for the national organization March of Dimes.

She noted that Louisiana consistently ranks among the worst in the nation for premature births, which have been linked in some cases to the mother's underlying health conditions, including diabetes and high blood pressure — conditions that have also been found to exacerbate the effects of coronavirus. Preterm birth is the most common cause of infant deaths in industrialized countries.

"Combine all those factors with this virus and you end up with a whirlwind of possibilities," Antoine said. She emphasized that pregnant women should take all possible precautions to protect themselves against coronavirus until more research becomes available.