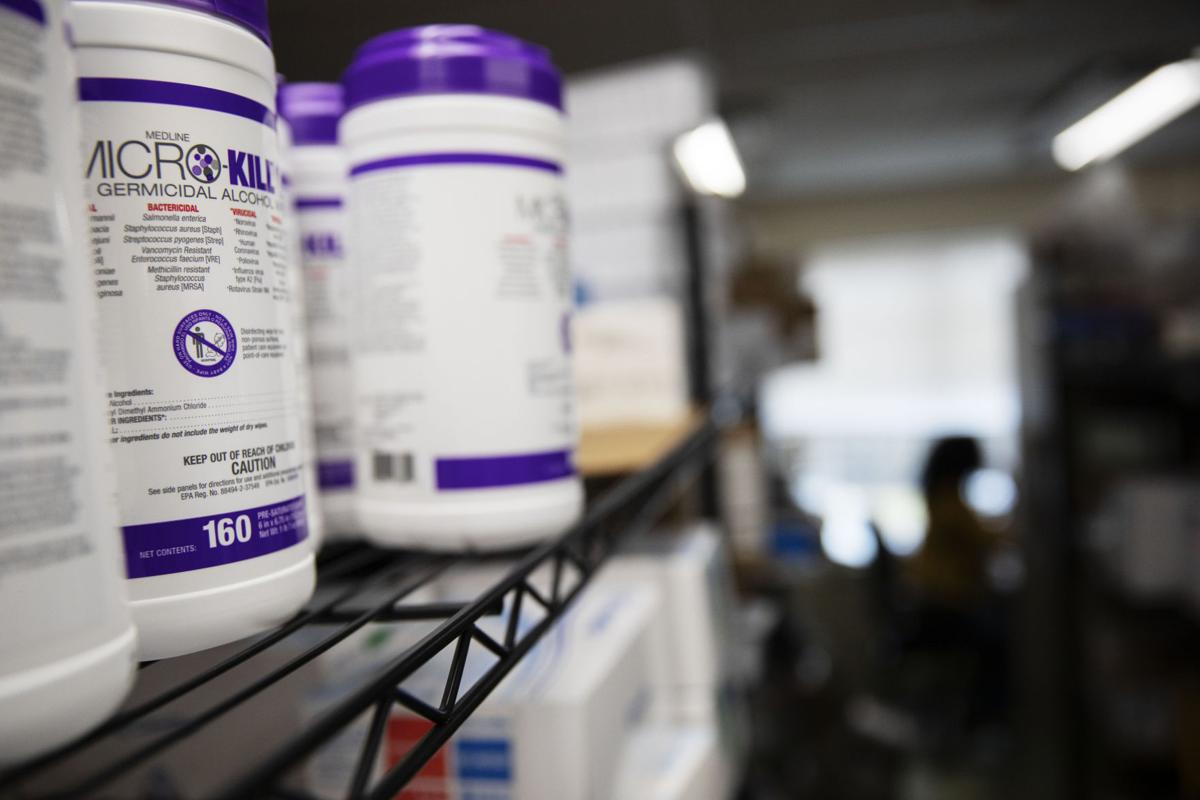 Germicidal wipes sit in the supply room at the South Shore Rehabilitation and Skilled Care Center, Friday, March 6, 2020, in Rockland, Mass. From Miami to Seattle, nursing homes and other facilities for the elderly are stockpiling masks and thermometers, preparing for staff shortages and screening visitors to protect a particularly vulnerable population from the deadly new coronavirus. (AP Photo/David Goldman) 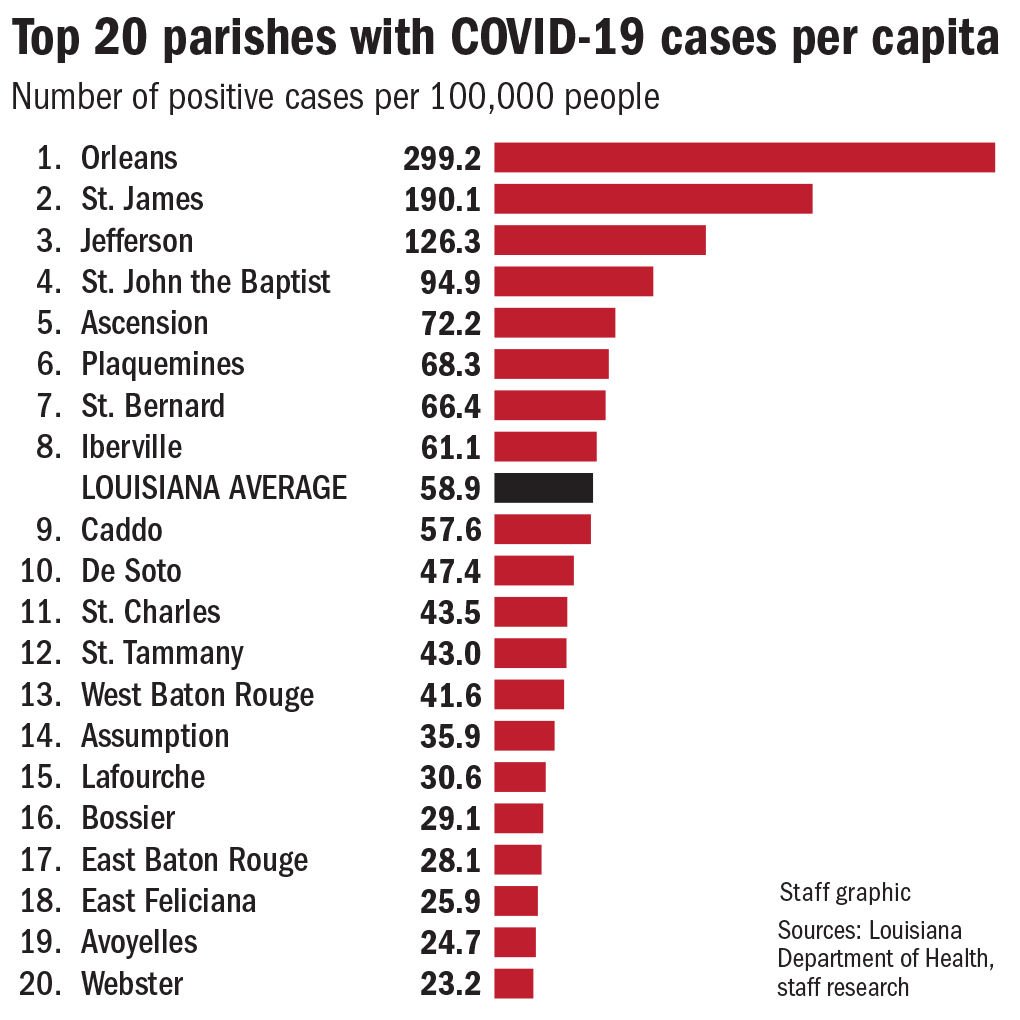 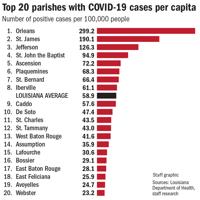 While East Baton Rouge has the largest number of known coronavirus cases in the Capital area -- hitting 124 as of Friday -- a handful of smaller suburban and rural parishes are seeing higher figures when accounting for population.

Ascension Parish had 90 people testing positive, giving it the second-highest per-capita rate in the Baton Rouge area. Only St James Parish was higher.

Running low on toilet paper? Georgia-Pacific plant near Zachary maxing out at 120% capacity

Don't blame manufacturers for that empty toilet paper shelf at the grocery store. Plants like Georgia-Pacific just north of Baton Rouge are ru…

St. James, with 21,000 people, had 40 cases as of Friday, which stands as the 9th highest total of any parish in the state. But when factoring in St. James' small population, the results are even starker -- the rate works out to 190 cases per 100,000 people. That's the second-highest level in the state, and only Orleans Parish had a higher per-capita figure, according to an Advocate analysis of Friday's data, the latest available.

East Baton Rouge Parish had only 34 more coronavirus cases than Ascension, though its population is almost four times larger.

Altogether, there have been 318 confirmed cases and 10 deaths in Baton Rouge and its surrounding parishes so far, according to the state testing data released Friday. That's a 16 percent increase in cases and four more deaths since Thursday.

State and local health officials said they don't know yet why some of the smaller parishes have high per-capita numbers, though some experts say one factor might be the major industrial facilities that tend to draw workers from across the region and use the various ports along the Mississippi River.

Alyson Neel, communications director for the Louisiana Department of Health, said state health officials are trying to make sense of what's leading to those totals during a fluid time.

"That is the question. If you can believe it, we're only in the second-and-a-half week of reporting cases at all," Neel said.

It 's not clear if the higher per-capita numbers in the smaller parishes equate to a higher coronavirus infection rate in those areas. Some officials speculate various levels of testing among the parishes could account for some of the differences, while others suggest the pattern is simply the normal spread of the virus from New Orleans to upriver parishes, being revealed piece-meal as batches of test results -- some of which are taking more than 10 days to be completed -- are reported.

The number of positive coronavirus cases in Louisiana continues to grow throughout the state Friday, health officials report.

Complicating the picture is the fact that the state can't yet break down the tests -- 21,359 were reported through Friday -- to allow parish-by-parish comparisons. Statewide, about 12.8% of the tests have come up positive, a figure that has dropped considerably since testing has increased.

Dr. Chris Trevino, chief medical officer of Our Lady of the Lake Ascension hospital in Gonzales, says that without a better idea of the testing in other parishes, he can't say definitively what is driving Ascension's per-capita total.

But he speculated that OLOL Ascension's drive-thru clinic and its close ties to the vast majority of physicians in the parish have steered residents to the hospital, uncovering more positives cases more quickly than in other area parishes.

"I believe that our numbers are higher because of the rate of testing that we're doing," Trevino said.

Dr. John Fraiche, Ascension's longtime coroner, said the hospital's drive-thru site has completed 350 tests as of Thursday. Another 84 have been conducted on patients in OLOL in Gonzales and Prevost Memorial Hospital in Donaldsonville.

Ascension Parish President Clint Cointment agreed Friday with Trevino's and Fraiche's take, saying the parish is "ahead of the curve" in testing.

But Cointment added, like Fraiche, that Ascension's location as a bedroom community with regular commuting and its delivery traffic for industrial plants may also be contributing to the high number of cases.

"Being a bedroom community with a robust economy, our community is inherently more mobile," Cointment said in a prepared statement.

Just to the north, suburban Livingston Parish -- with nearly 15,000 more people than Ascension -- had no drive-thru testing sites. The parish isn't on the river corridor, but is home to a long stretch of Interstate 12, which is heavily used by cross-country traffic.

Eleven people have tested positive for coronavirus in Livingston, about one-eighth of the total found in Ascension, state data shows.

Mark Harrell, Livingston Parish's homeland security director, said residents are having to go to facilities in East Baton Rouge Parish to get tested, but added that local officials are working to set up their own drive-thru site.

Another area parish, St. James, had the Baton Rouge region's first coronavirus death on March 18 when the pastor of a west bank church died. Parish officials announced Monday that St. James was facing "community spread" of the virus, and it has seen two more deaths since then.

Dozens of others with less severe symptoms have been sent home, while seven were immediately sent to other hospitals due to their condition, she said. All patients who end up on a ventilator are sent to other facilities, she noted.

Pratt was at a loss to explain why St. James Parish has such a high per-capita rate but said her facility is certainly feeling it.

"All I know is that we are treating a higher acuity patient," she said. "We are surging at the hospital with regard to the number of patients we are caring for."

Orleans Parish has the highest per-capita death rate for the coronavirus among all American counties to date, a new analysis by The Times-Pica…