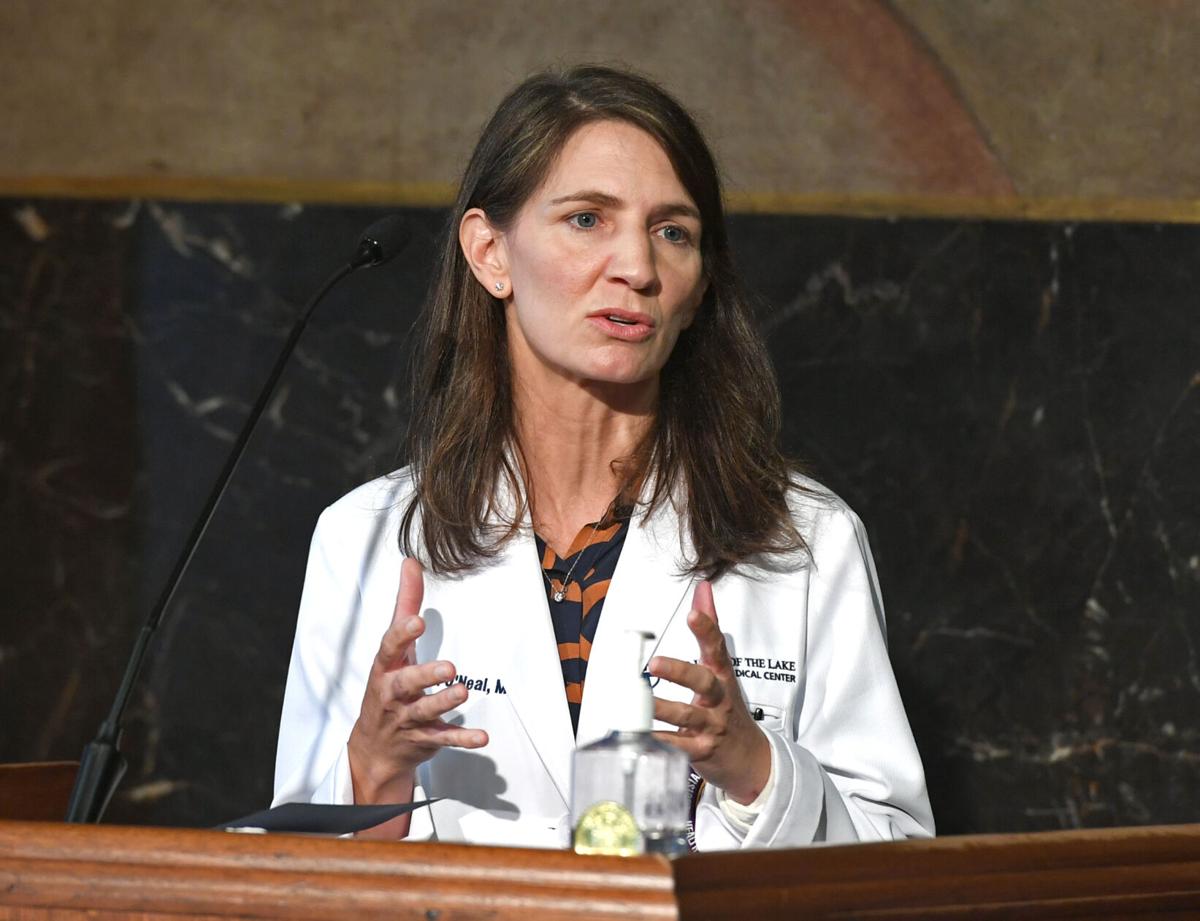 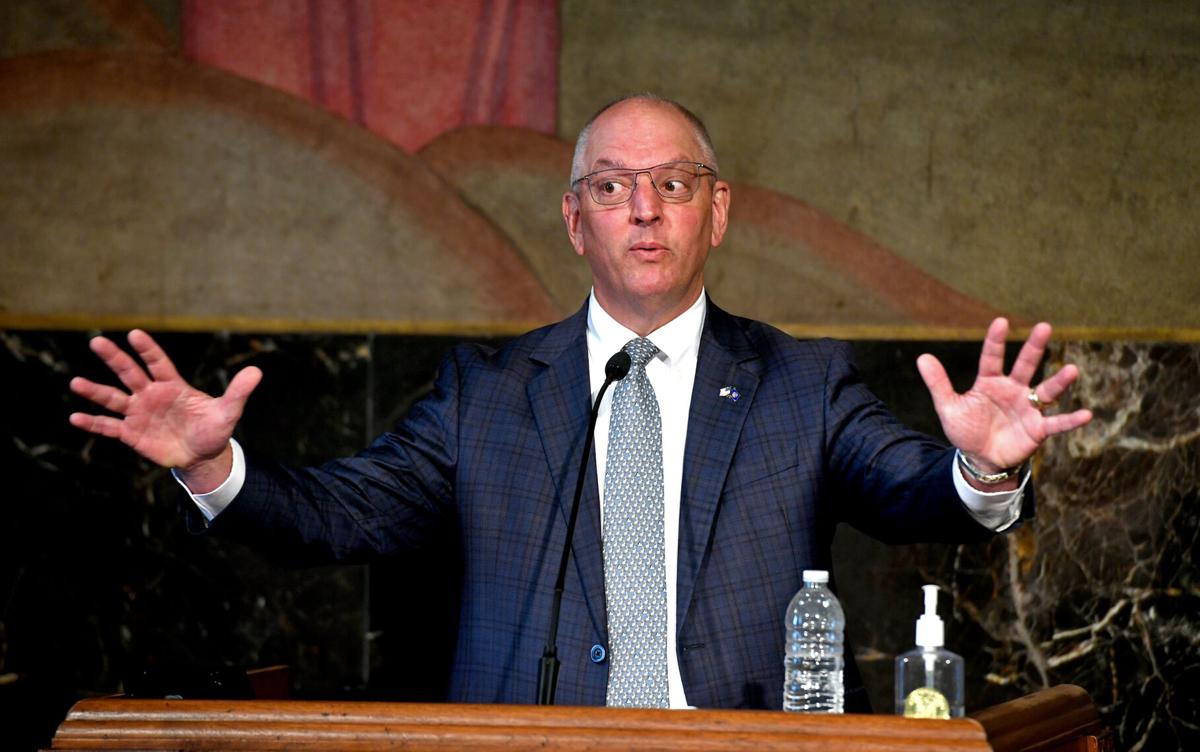 Louisiana Gov. John Bel Edwards gives an update on the pandemic and announced the first winners of the Shot At A Million vaccine lottery campaign. 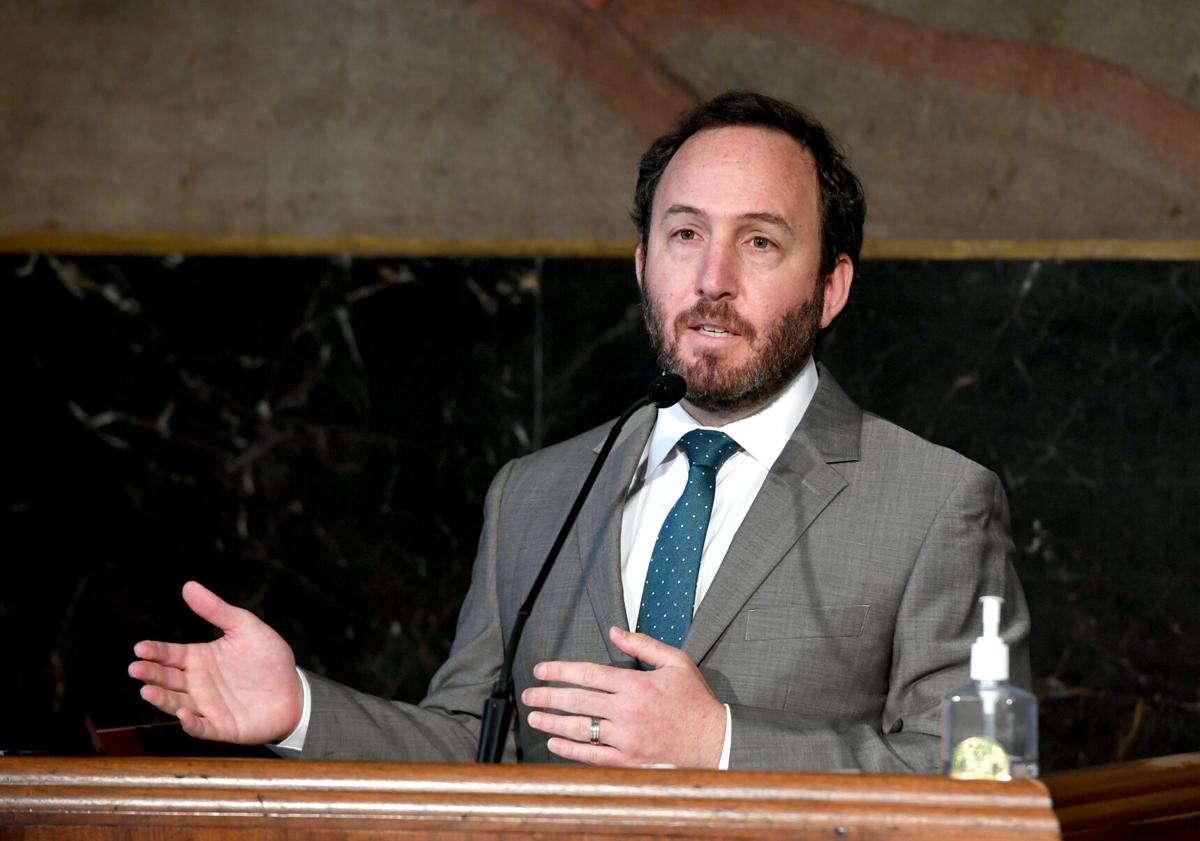 State Health Officer Dr. Joe Kanter, gives details during a press conference Friday about the Covid-19 spike that the State is experiencing. Louisiana Gov. John Bel Edwards gave an update on the pandemic and announced the first winners of the Shot At A Million vaccine lottery campaign.

Louisiana Gov. John Bel Edwards gives an update on the pandemic and announced the first winners of the Shot At A Million vaccine lottery campaign.

State Health Officer Dr. Joe Kanter, gives details during a press conference Friday about the Covid-19 spike that the State is experiencing. Louisiana Gov. John Bel Edwards gave an update on the pandemic and announced the first winners of the Shot At A Million vaccine lottery campaign.

Faced with a startling and preventable new surge in COVID-19, an infectious disease specialist in Baton Rouge offered a stark warning on Friday to the millions of Louisiana residents who have opted not to get vaccinated.

"If you don't choose the vaccine, you're choosing death," said Dr. Catherine O'Neal, chief medical officer at Our Lady of the Lake Regional Medical Center in Baton Rouge.

The dire message comes as Louisiana experiences a spike in cases and hospitalizations, fueled by the rapidly spreading delta variant and made worse by the state's lackluster vaccination rates.

COVID-19 is again on the rise in Louisiana as state officials urge residents to get vaccinated to stave off the rapidly spreading delta variant.

Gov. John Bel Edwards blamed Louisiana’s lagging vaccination rate on misinformation and rumors peddled on social media. He urged those who have already rolled up their sleeves to serve as “vaccine ambassadors” for friends and family who remain weary of the jab.

“Bad information about the COVID-19 vaccine is slowing our efforts to end the pandemic,” Edwards said. “The misinformation out there about vaccines is literally costing lives.”

The alarming tone of Friday's press conference overshadowed what would otherwise have been a celebratory occasion: Louisiana announced the first two winners of its vaccine lottery, with Skyla Degrasse, a 17-year-old high school senior from Hammond winning a $100,000 scholarship, and Clement Dasalla, an 80-year-old retired cop from New Orleans winning a $100,000 cash prize.

When Lakeisha Brown knocks on doors to talk about the coronavirus vaccines, she anticipates tough conversations. Oftentimes, folks are confuse…

The Democratic governor credited the lottery – which will distribute $2.3 million in perks to 14 winners over the next five weeks – with boosting the state’s vaccination rates, which have leveled off at around 4,500 doses a day after facing months of steady declines.

Still, those vaccinations haven’t been enough to make up for Louisiana’s bottom-of-the-barrel inoculation rate and have done little to stave off a fourth, deadly surge in cases. Just over 50% of adults in Louisiana have received the shot, far below the national average at 68%.

"I want to be clear after seeing what I've seen the past two weeks," O'Neal said. "We only have two choices: we are either going to get vaccinated and end the pandemic. Or we are going to accept death. A lot of it, this surge, and another surge, and possibly another variant."

Louisiana announces the first two winners of its vaccine lottery. Here's what they won.

Louisiana announced the first two winners in its vaccine lottery Friday, kicking off five weeks of drawings that will dole out $2.3 million in…

The number of new COVID-19 cases confirmed each day in Louisiana has been rising for the last three-and-half weeks, while the percentage of test returning positive topped 6% this week after remaining below 5% since February, said Dr. Joe Kanter, the state’s chief public health officer. The number of people hospitalized with COVID-19 has more than doubled in two weeks, climbing to 563 Friday.

“The data is overwhelmingly conclusive that we’re in a surge right now,” said Kanter, standing next to a screen showing increases in both hospitalizations and cases in all nine regions of the state.

O’Neal warned that the delta variant – which now accounts for 59% of cases in Louisiana – is a “whole different beast” from the initial strain of COVID-19. For example, while last summer's virus was not particularly infectious among children, the delta variant is, she said. The state reported 35 outbreaks in the last week in settings like day cares and summer camps.

For weeks, experts have been bracing for the effects of the Delta variant, a version of the coronavirus first discovered in India that is twic…

O’Neal added that people who previously have been infected with COVID-19 aren’t protected against the new strain.

“We cannot take what we think we learned from last year’s virus and apply it to this summer because it’s killing us,” she said. “We’re being overwhelmed, and it’s happening really fast.”

Seeking to spur new vaccinations, Edwards noted that since February, 97% of COVID-19 cases and deaths have been individuals who have not been fully vaccinated.

Slightly more than 1.8 million people, or 39% of Louisiana’s total population, have received at least one dose of the vaccine, according to state health department data. More than 1.6 million people have been fully immunized, or 36% of the population.

The state is tracking 2,175 “breakthrough cases” of vaccinated individuals getting infected with COVID-19, Kanter said. Of those cases, 125 have been hospitalized and 34 have died. Most of those serious cases are among the elderly, Kanter said, whose immune systems naturally have a harder time mounting a robust defense.

“By and large, breakthrough cases are rare, and the consequences of them are much, much more mild than when someone who is unvaccinated contracts COVID,” Kanter said.

O'Neal, who has been one of the governor's closest advisers throughout the pandemic, described how the delta variant gets into a patient's body before they know they are sick. For the vaccinated, she said it's OK because their antibodies can still kick in to fight the virus.

"For the unvaccinated, it's like letting a burglar cross all the way through your threshold, all the way into your bedroom and wake you up from sleep before you know it's there," O'Neal said. "Delta variant is sneaky, it's a beast and it has figured out why you are no longer that person who's going to be fine. It's killing us."

She implored people to realize that people being hospitalized and dying with the virus are their friends and neighbors.

"What are we seeing with our COVID patients?" she said. "When I look through our list every morning, it's my friends. It's my peers. They're 30 and they're 40 and their kids go to school with my kids, and their kids are starting college in three weeks and they're not going to be alive. It is us."

Edwards said he has no intention, at the moment, of adding new mitigation measures, like a mask mandate. He said his administration will continue to try to reach people – either through door-to-door canvassing or prospects of a $1 million lottery jackpot – and help them make the "right decision" to get vaccinated.

“We’re going to continue to furnish the best, most reliable information that we can to everyone no matter how entrenched and intransigent they may seem,” he said. “We’re never going to give up on any segment of our population no matter what reason they assign for not being vaccinated. We're going to keep working hard.”

Young, unvaccinated COVID patients are dying in Acadiana: 'We're stuck in this nightmare'

A 24-year-old Lafayette nurse and a 30-year-old Eunice pastor died over the weekend after seeking hospital treatment for COVID-19, according t…