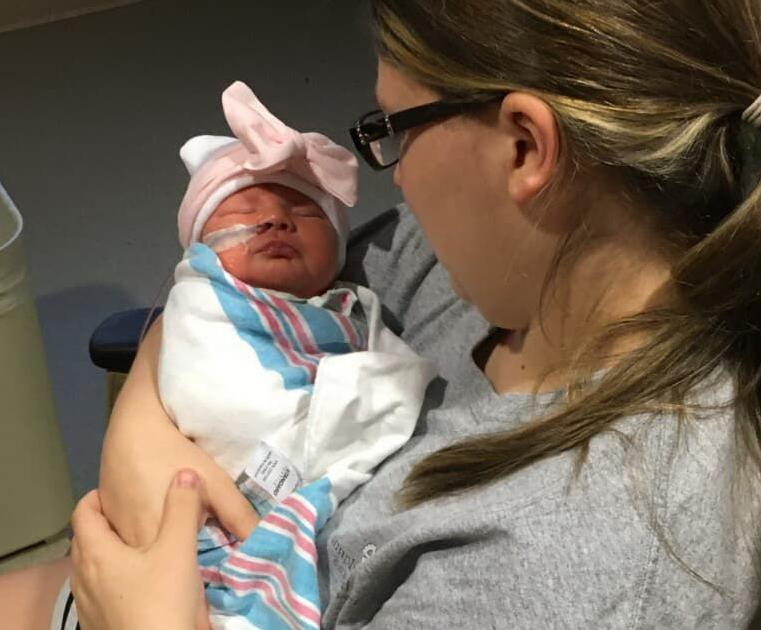 Madicyn Garrett and her newborn, Hadlee. 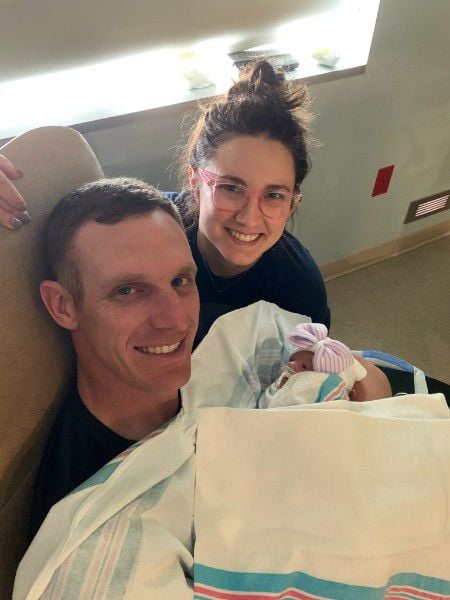 Nora Louise Wheat, with her parents. 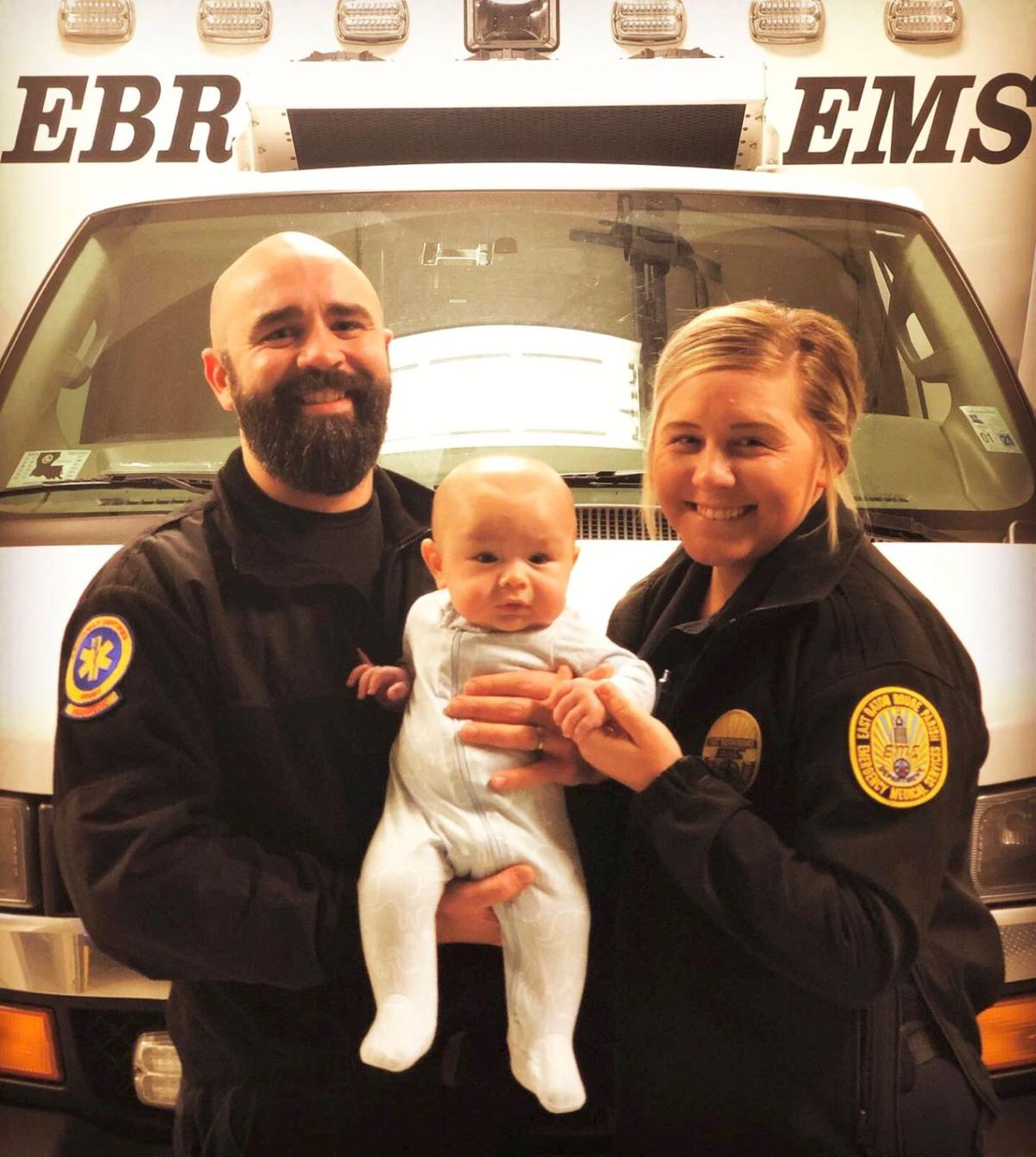 From the left: Ryan McCutcheon, Eli Nash McCutcheon and Meghan McCutcheon. Ryan and Meghan, both EMS paramedics, worry they will expose their seven-month-old to COVID-19 after their long days at work transporting sick people to the hospital. 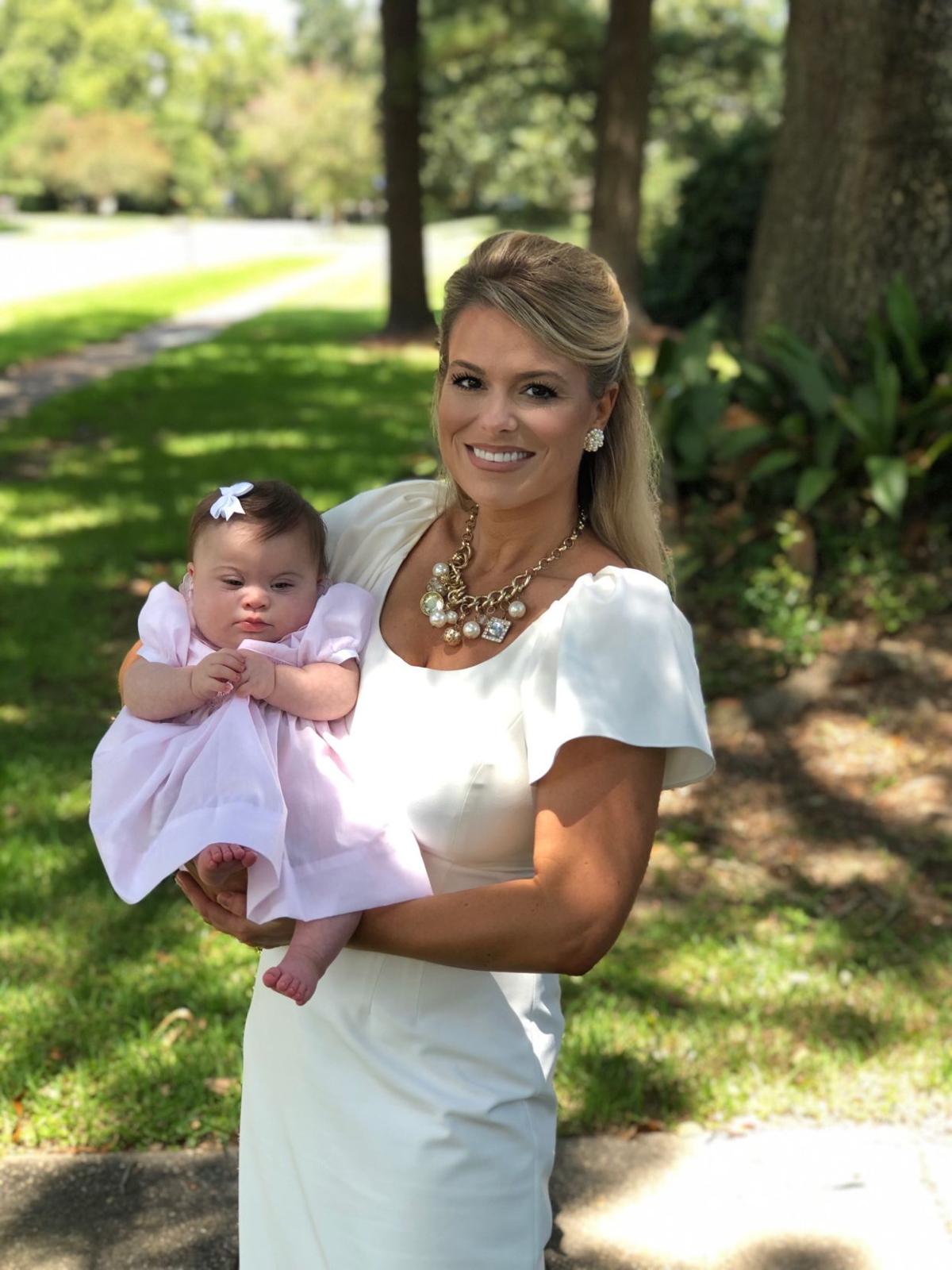 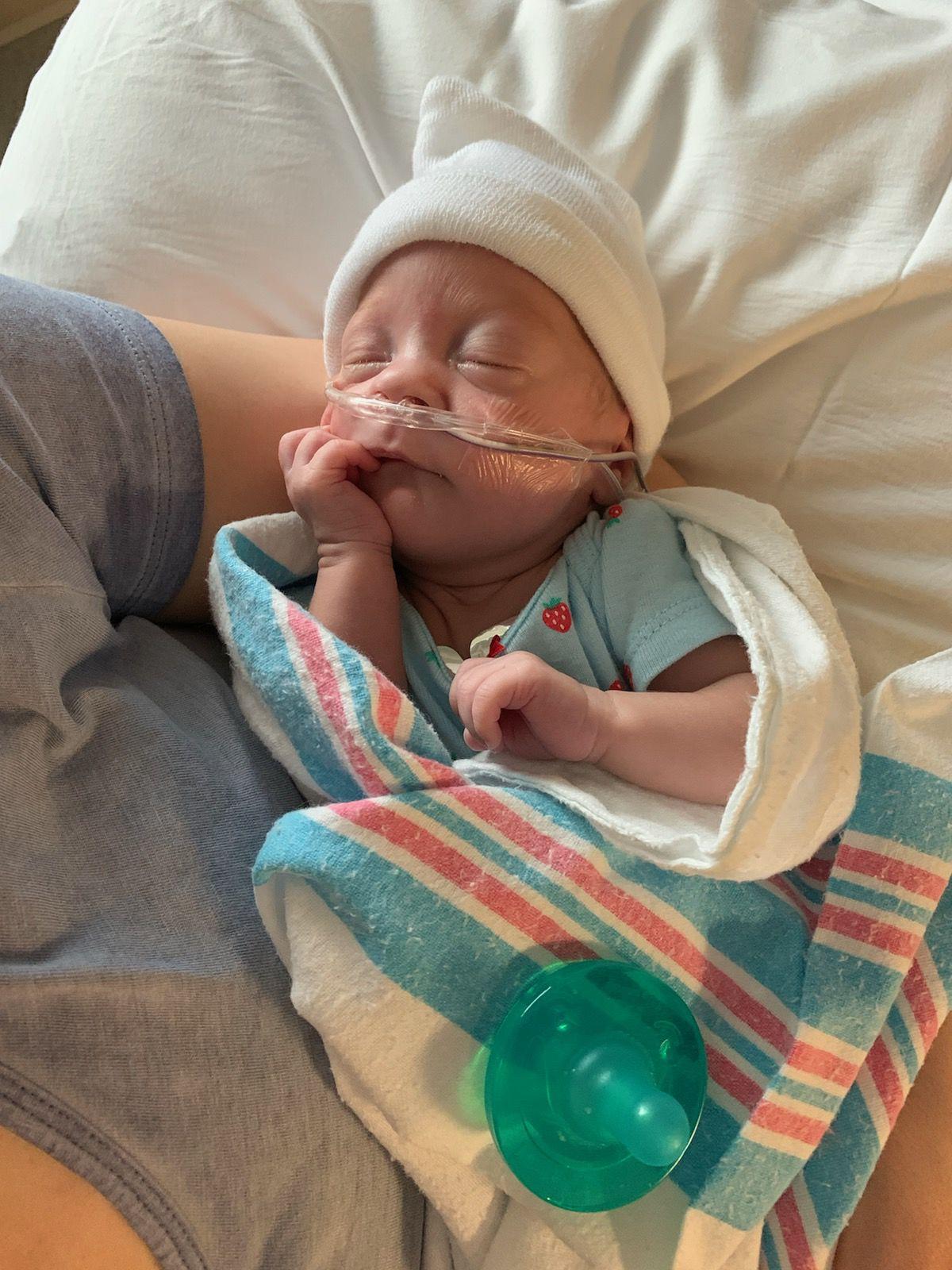 Madicyn Garrett and her newborn, Hadlee.

Nora Louise Wheat, with her parents.

From the left: Ryan McCutcheon, Eli Nash McCutcheon and Meghan McCutcheon. Ryan and Meghan, both EMS paramedics, worry they will expose their seven-month-old to COVID-19 after their long days at work transporting sick people to the hospital.

When 21-year-old Madicyn Garrett went into labor on St. Patrick’s Day in the middle of Airline Highway as she rushed to Woman’s Hospital, she thought the unexpectedly early birth of her daughter would be the most harrowing experience of her month.

But Garrett gave birth just as the coronavirus pandemic arrived.

Nurses stationed at the entrance of the hospital were screening arrivals for COVID-19. They rushed to Garrett’s aid as the car pulled in front of the building and sped her to an operating room.

When Will Tweedy was first diagnosed with throat cancer late last year, his friends and family were eager to check up on him — but the last th…

She gave birth alone. Both Garrett and her daughter, Hadlee Nora Mae Garrett, stopped breathing after the delivery and had to be resuscitated.

“It was very scary, extremely,” Garrett said. “I’ve never done anything like that by myself. With my son, I had everybody with me.”

With the onset of the virus, new mothers are navigating escalated anxiety and concerns surrounding their babies' health and safety.

One of those mothers is 29-year-old Kristen Wheat, who gave birth to her premature daughter, Nora Louise Wheat, in January.

At first, Wheat spent every day with Nora in the Neonatal Intensive Care Unit at Woman's Hospital — known as the NICU. But when Gov. John Bel Edwards announced his stay-at-home directive, Wheat and her husband made the difficult decision to avoid the unit in an effort to protect her.

“It’s a double-edged sword,” Wheat said. “The babies truly seem to do better when they have one-on-one time with Mom. But if we do go, then we run the risk of bringing something up there. So it almost feels like a lose-lose either way.”

Leigh Townsend’s job as NICU family support navigator at Woman's is to guide mothers and loved ones through the uncertainty of the NICU experience, a fragile situation now further jeopardized by the arrival of the lethal virus.

“We’re at crisis management on the best day,” Townsend said. “No one ever wants their baby in the NICU. It’s intimidating."

Already a secure bubble where hand washing and personal protective equipment is the norm, the unit has limited occupants and ramped up screening.

“If something is going to happen to one of these babies, it’s not going to be because we let it happen,” Townsend said.

It's not just parents of newborns who are affected.

The two spend their days responding to sick residents — some of whom may be infected with COVID-19.

“When we signed up for this job, we knew we would have to work through flu season, go to bad wrecks and shootings,” Meghan McCutcheon said. “This is something we never prepared for."

After they return from their shifts, they immediately throw their clothes into the wash and head straight to the shower — avoiding their son until thoroughly disinfected.

“It’s hard to know you can’t go love on him as soon as your shift is over,” she said.

McCutcheon also knows the signs and symptoms of COVID-19; it’s her job. So when she notices Eli has a runny nose and a fever, she gets nervous, even though she knows these are normal indicators of teething infants.

“But then you start to panic and wonder if it’s a symptom of COVID-19,” she said. “He’s building his immune system, so it’s not something he can fight off. You’ve got to talk yourself down.”

Then there are the mothers whose worst fear is realized.

For 34-year-old Leah Couvillion, the past few weeks have been agony. After initially being denied a test for COVID-19, she finally got her positive results after 12 long days of waiting.

Couvillion has two small daughters, one of whom has Down syndrome. At about a year old, baby Macy has been to the hospital roughly 15 times.

“I just feel like if she gets something like this, she has no chance,” Couvillion said. “She can’t even get through a cold on her own.”

As she waited for her results, Couvillion did her best to disinfect the house, wear a mask, stay away from her children and take them outside for fresh air. But in the interim, while Couvillion battled her own illness, Macy started to suffer from respiratory problems.

Macy ultimately tested negative for the virus, but Couvillion said the back-and-forth has been exhausting.

“I’m scared for both of my kids," she said. "But mainly the one who can't fight this on her own."

Down the road from an elementary school that had moved its classes online, across the street from a restaurant restricted to takeout, within a…

Amid the pain of separation, Kristen Wheat has found moments of grace. After she decided to restrict contact with her baby, the NICU team at Woman's rushed to support the family.

Staff set up a Zoom call, so that within hours of their initial separation, Wheat was able to watch her daughter take her first bottle.

"For parents who have been in the NICU, it's a really big deal for your baby to take their first bottle," Wheat said, her voice breaking. "And not being able to be there, I think that was the next best thing they could have offered us."