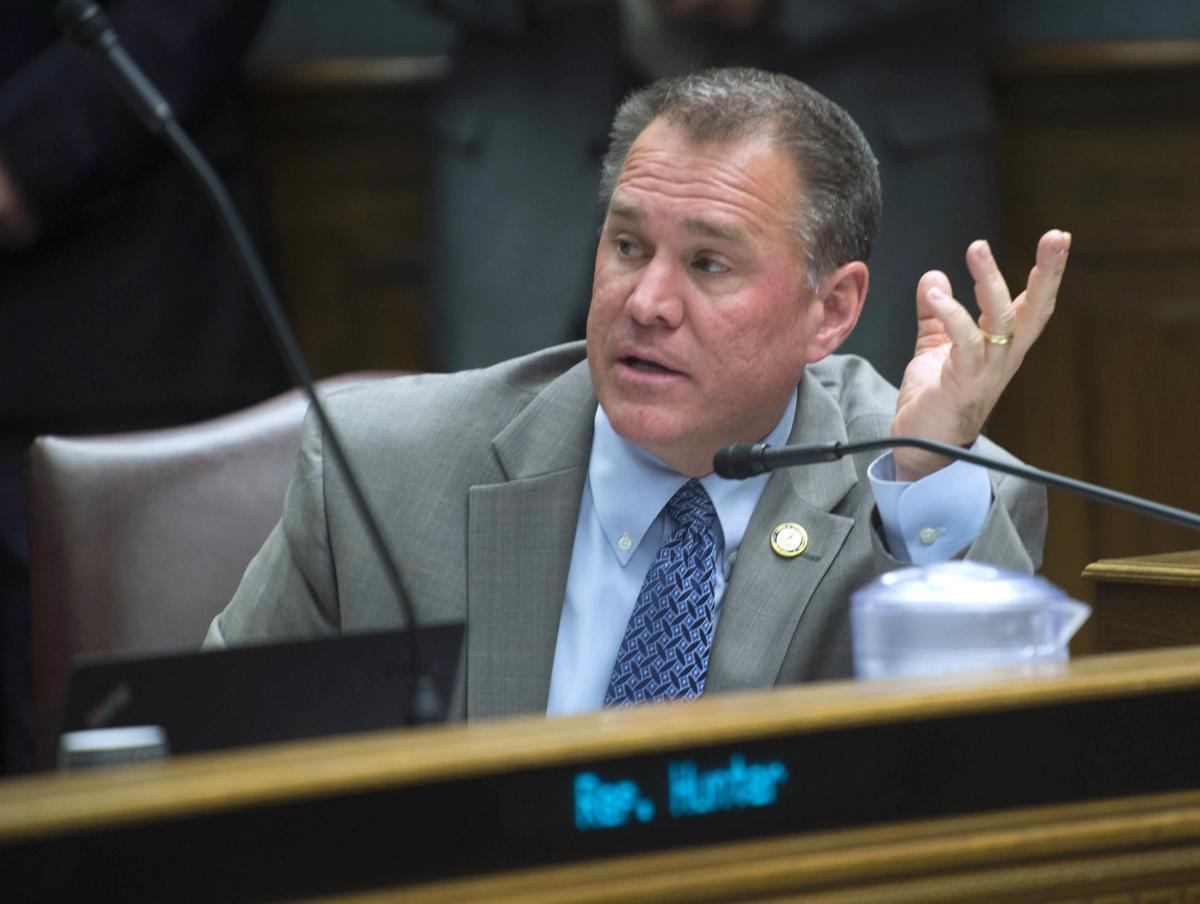 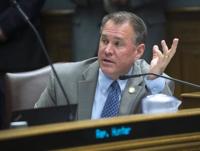 Rep. Alan Seabaugh, R-Shreveport, discusses a proposed sunset amendment to a bill during special session action in the House Ways and Means Committee, Sunday Feb. 25, 2018 at the State Capitol. 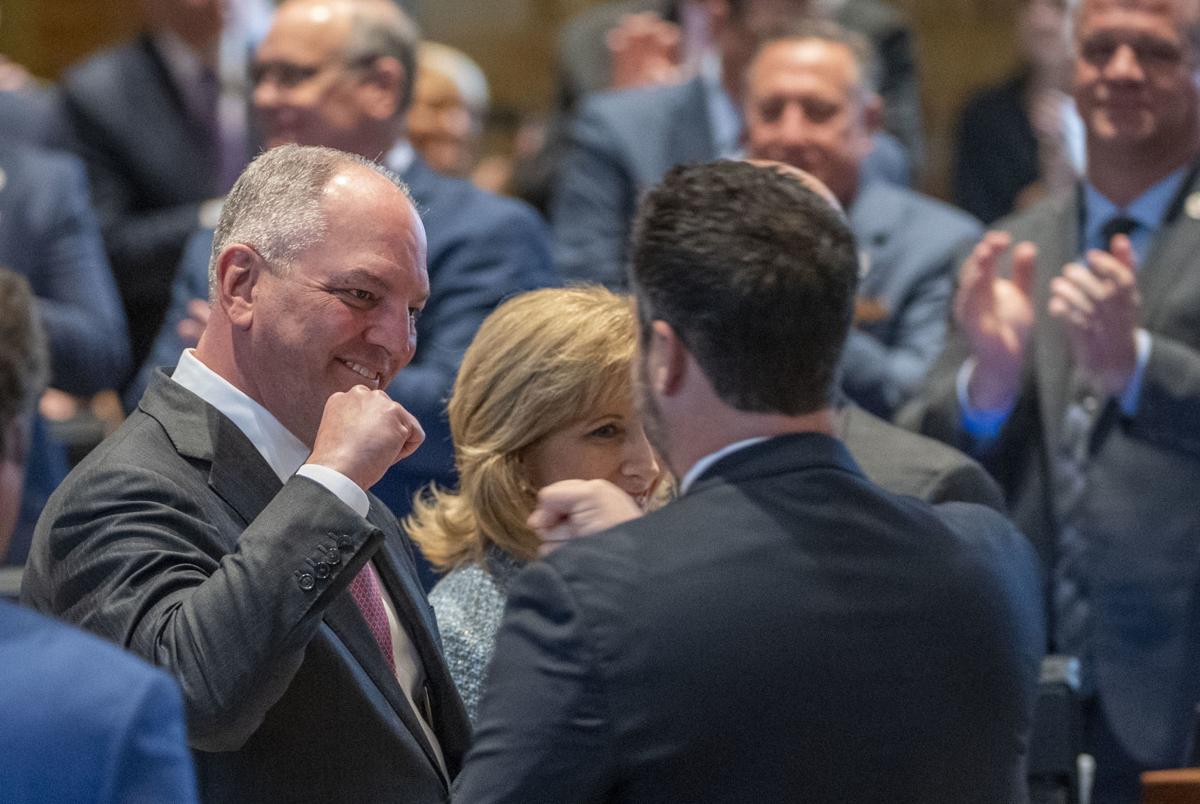 Elbow and fist bumping down the aisle, Gov. John Bel Edwards and wife Donna Edwards enter the House Chamber for the state of the state address to the joint session as the 85 day regular legislative session begins Monday March 9, 2020, in Baton Rouge, La. Edwards fist bumps Rep. Blake Miguez, R-Erath, back to camera.

Rep. Alan Seabaugh, R-Shreveport, discusses a proposed sunset amendment to a bill during special session action in the House Ways and Means Committee, Sunday Feb. 25, 2018 at the State Capitol.

Elbow and fist bumping down the aisle, Gov. John Bel Edwards and wife Donna Edwards enter the House Chamber for the state of the state address to the joint session as the 85 day regular legislative session begins Monday March 9, 2020, in Baton Rouge, La. Edwards fist bumps Rep. Blake Miguez, R-Erath, back to camera.

As Gov. John Bel Edwards traded plaudits with President Donald Trump at the White House over how each has handled the coronavirus, a partisan battle erupted back home with a group of GOP lawmakers working to build support for taking the unprecedented step of repealing the governor’s public health emergency declaration.

Incensed by an extension of the state’s stay-at-home order until May 15, and a perceived lack of communication on Edwards’ behalf, a cadre of Republican legislators have been looking at a little-used law to overturn the public health emergency declaration and proclamations that have wreaked havoc in the state’s economy as businesses have closed and more than 350,000 workers have filed for unemployment.

“Members are weighing the different options that they have and this is one of them,” House Majority Leader Blake Miguez, R-Erath, told The Advocate and Times-Picayune.

State law allows a majority in either legislative chamber to overturn the governor’s order and give that authority to local officials, according to a draft circulated by Rep. Alan Seabaugh, a Shreveport Republican.

While a long shot to pass, the movement exposed cracks in the relationship between the Democratic governor and a new, more conservative Legislature controlled almost entirely by Republicans.

Louisiana Gov. John Bel Edwards will extend the state’s stay-at-home order until May 15th, keeping a wide swath of the state’s economy at a st…

“I know each of you have been consulted about this petition and you each have your own opinions,” Seabaugh said in an email to Republican lawmakers, which was obtained by The Advocate. “This may not be a perfect solution, but it is the only one on the table. Doing nothing is not an option!”

The effort gained attention the same day Edwards and Trump convened in the Oval Office and heaped praise on each other for their pandemic strategies. Months after Trump spent last fall’s campaign season rallying for Edwards’ Republican opponent, the president said it was an “honor” working with the governor, adding that coronavirus testing has helped the governor’s response become successful.

Edwards likewise thanked Trump for delivering field hospitals, Navy personnel and other resources to Louisiana. He said testing kits recently pledged by Trump’s administration will be enough to begin a phased reopening, likely in mid-May, when his stay-at-home order will expire.

“They’ve committed to resourcing Louisiana’s request for 200,000 test kits per month,” Edwards said of the U.S. Department of Health and Human Services. “That gets us to 43 out of every 1,000 tested each month. We believe that’s sufficient for us to move forward as we’re able to reopen our economy.”

If the Republican legislators’ petition is successful, Edwards’ chief lawyer Matthew Block warned legislative leaders Louisiana would become the only state in the nation without an emergency declaration. It would also revoke bans on price gouging, end the suspension of legal deadlines, end the closure of schools and perhaps most importantly, result in a “crushing loss of federal funding.”

Louisiana expects at least 75% – perhaps 90% – of its costs to be covered by the federal government because of the emergency order, said Commissioner of Administration Jay Dardenne. The state has currently spent about $586 million and could hit $662 million, at which point the feds would pick up 90% of the tab, Dardenne said, adding it makes “no sense” to revoke the emergency order.

After Block pointed out lawmakers would need to consult a “public health authority” to move forward with revoking the order, Seabaugh emailed members that the petition had been redrafted to add a consultation with a public health authority and to give local officials the ability to declare disasters or emergencies.

Seabaugh also said the effort will not move forward until he and others get answers about whether the move would risk federal funding.

House Speaker Clay Schexnayder said in a statement people are ready to “re-open the economy,” and that he is “incredibly frustrated with Governor Edwards’ unilateral decision” to extend the order.

Schexnayder, like other Republicans, including Baton Rouge Congressman Garret Graves, said the state should be reopening different regions of the state at different times. While some other states have taken that approach, Edwards has rejected it.

Edwards had in recent weeks expressed optimism that Louisiana could begin a phased reopening of the economy on May 1, if it met criteria for cases, hospitalizations and other metrics laid out by the White House. He shared that goal with Republican lawmakers last week, according to Rep. Valarie Hodges, R-Denham Springs.

“He said, ‘We’re looking good.’ And that’s what I told my constituents.”

She learned that the order would be extended to May 15 about five minutes before Edwards made the announcement on television, Hodges said.

“It’s very discouraging for people in my district. They’re telling me they’re losing their businesses, they can’t make their car notes, they may lose their homes again,” Hodges said. “People are desperate. We’ve got to have that conversation.”

The governor met with state health leaders and several outside experts this week on where Louisiana stood, and the group came to the unanimous conclusion that the state wasn’t ready.

The stay-at-home order has flattened the number of cases in one of the nation’s hardest-hit states. As of Wednesday morning, Louisiana ranked No. 5 in the country in per-capita cases.

Among the top 10 states for per-capita cases, two were set to begin lifting their stay-at-home orders on May 8, and four including Louisiana were slated to lift them on May 15th. Other dates included May 18, May 25, May 30 and one, Connecticut, likely in June, according to an Advocate review of executive orders and news reports.

As of Wednesday, Louisiana’s death toll had climbed above 1,800 and 27,660 had been confirmed to have the virus here, though officials believe the actual number is far greater. The state has experienced one of the most ravaging death tolls of any U.S. state, something officials are investigating.

Dr. Catherine O’Neal, an infectious disease specialist at Our Lady of the Lake Regional Medical Center, was among the experts consulted by Edwards Sunday. She said the health care experts from both within the state and outside the state all agreed the state needed 14-day decreases of cases, hospitalizations and people with COVID-19-like symptoms, along with adequate testing and contact tracing, to reopen. The several dozen health care professionals advising the governor and his staff felt “strongly” at least three regions – around Baton Rouge, Acadiana and northeast Louisiana – were not prepared to reopen, and that the governor should extend the order.

14 days in quarantine: Former Louisiana resident details her isolation after moving to Texas