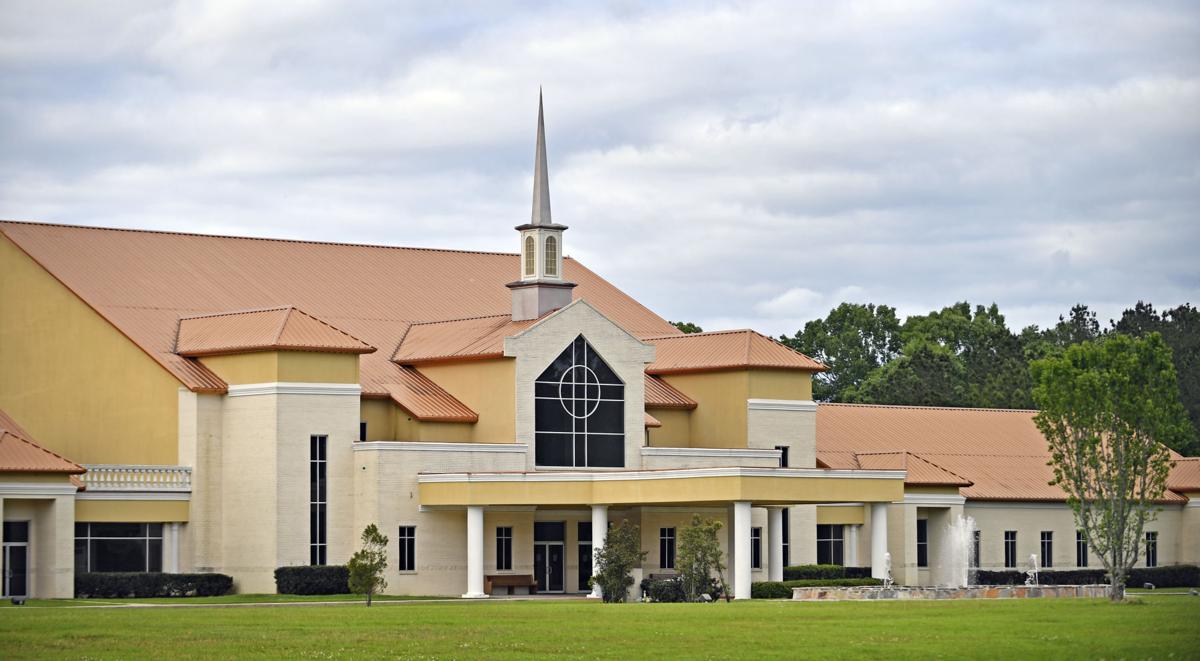 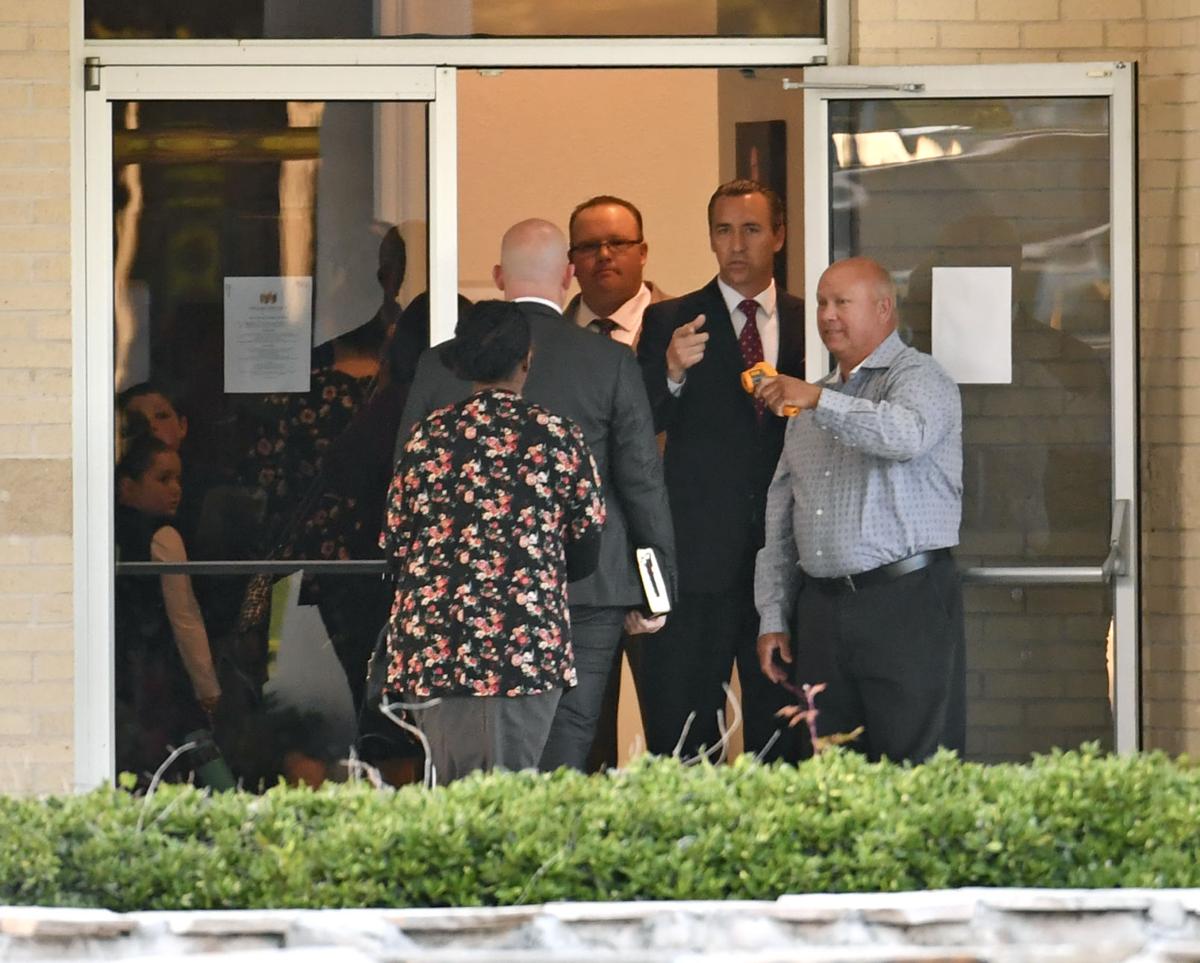 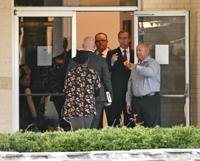 Pastor Tony Spell stands in the doorway as congregants have their temperature taken at the door upon arrival for the 7:30 pm Tuesday service at Life Tabernacle Church on Hooper Road, Tuesday, March 31, 2020, Central, La. 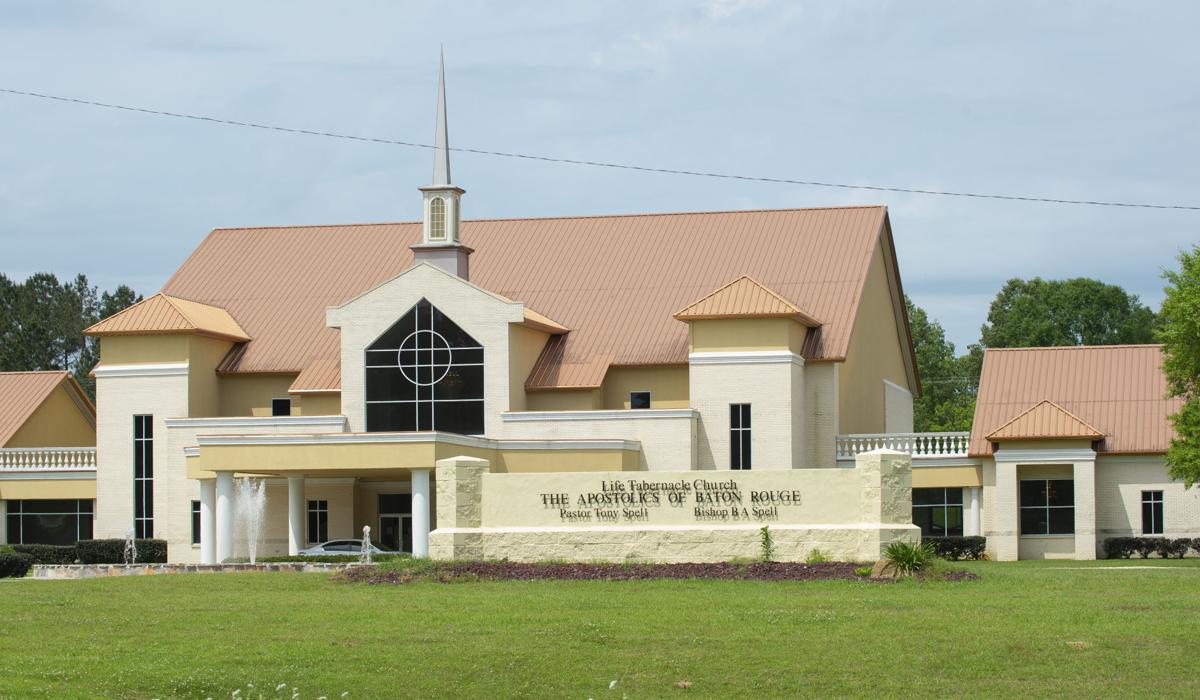 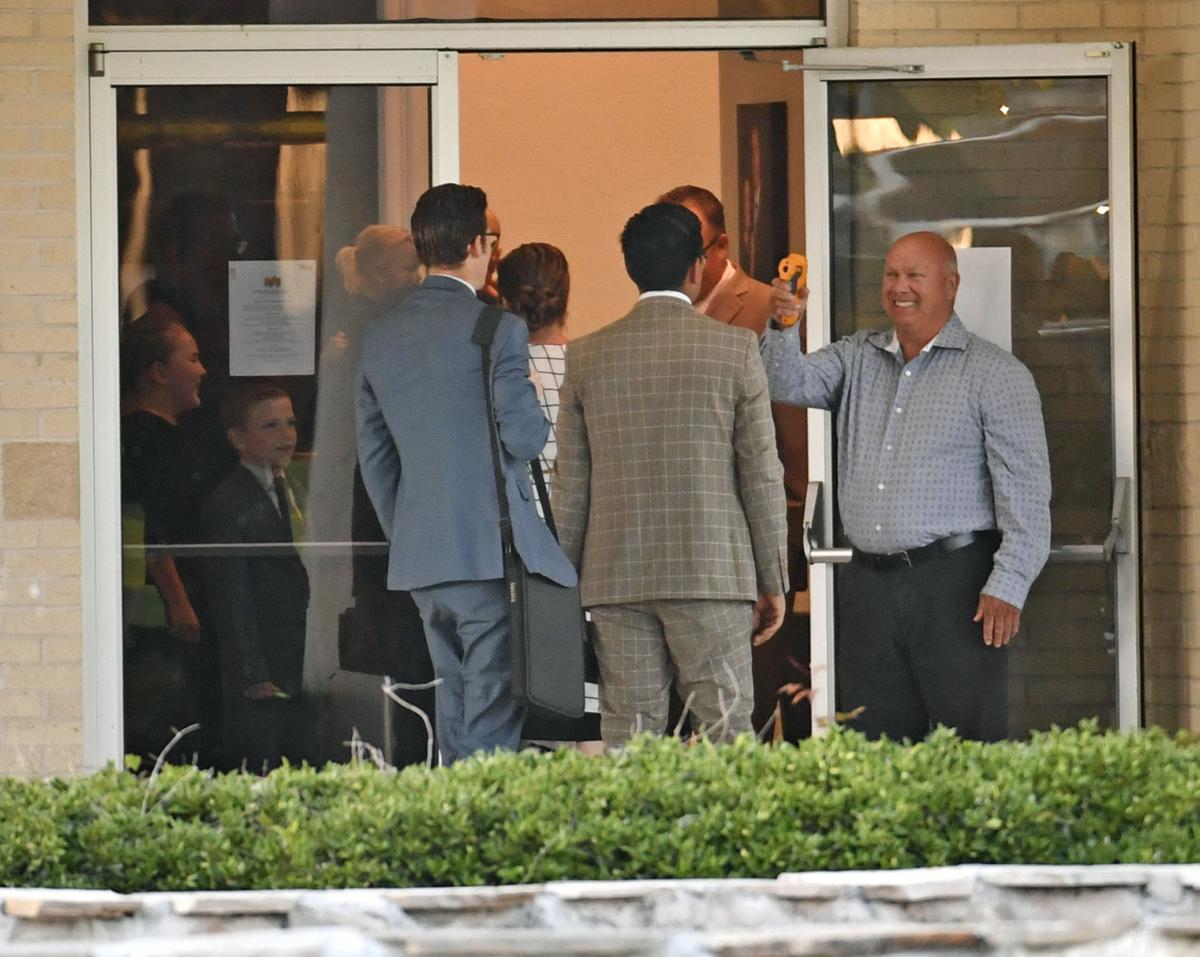 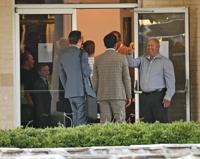 Congregants have their temperature taken at the door upon arrival for the 7:30 pm Tuesday service at Life Tabernacle Church on Hooper Road, Tuesday, March 31, 2020, Central, La. 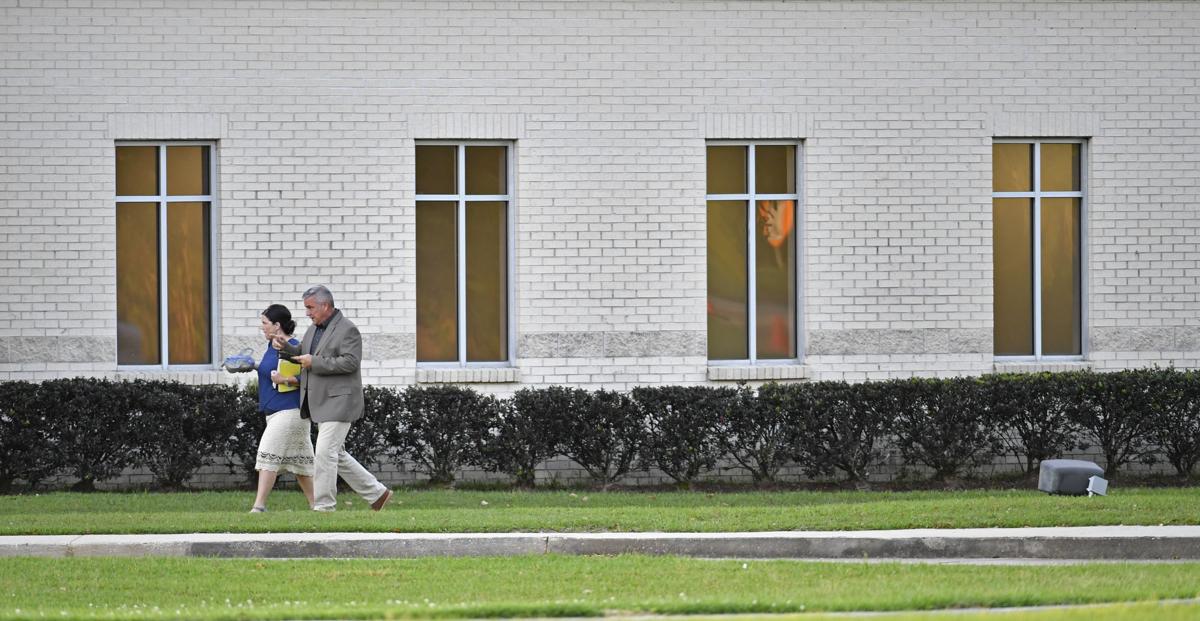 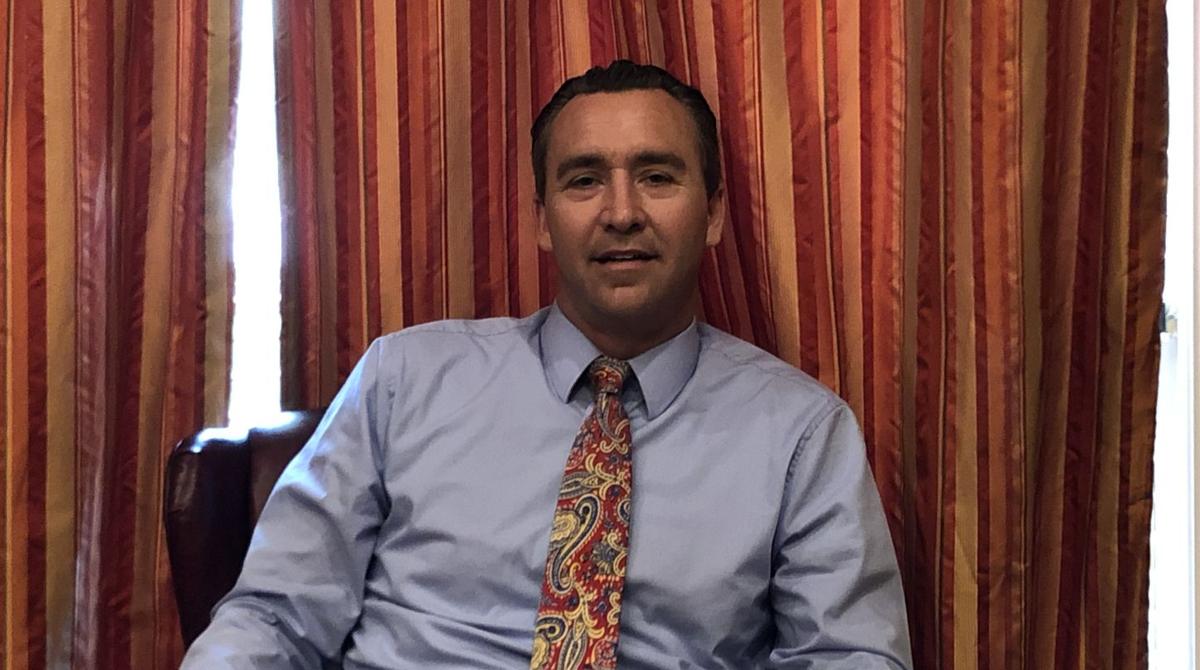 Pastor Tony Spell stands in the doorway as congregants have their temperature taken at the door upon arrival for the 7:30 pm Tuesday service at Life Tabernacle Church on Hooper Road, Tuesday, March 31, 2020, Central, La.

Congregants have their temperature taken at the door upon arrival for the 7:30 pm Tuesday service at Life Tabernacle Church on Hooper Road, Tuesday, March 31, 2020, Central, La.

CENTRAL — A Central pastor accused of violating an order to limit crowd sizes amid an outbreak of the novel coronavirus set up a showdown for Tuesday night by pledging to hold church services just hours after being cited on six misdemeanor counts.

Pastor Tony Spell is accused of violating provisions of Gov. John Bel Edwards' emergency declaration six times over the past two weeks. Spell has ignored requests from city, parish and state leaders to suspend services at Life Tabernacle Church in Central amid a surge in fatal coronavirus cases in Louisiana and the region.

"He will be held responsible for his reckless and irresponsible decisions that endangered the health of his congregation and our community," Central Police Chief Roger Corcoran said shortly after Spell was fingerprinted and read his constitutional rights. "We are facing a public health crisis and expect our community's leaders to set a positive example and follow the law."

Despite being accused of the misdemeanor offenses, which carry a maximum punishment of $500 and up to six months in parish jail, Spell said he plans to continue holding services, including on Tuesday night.

When asked what he would do if Spell held another service, Corcoran said, "We're going to take it as we see it."

While Louisiana has seen more than 5,000 cases of coronavirus, and more than 200 deaths, Spell has ignored the potential danger to his congregation and the community by holding large public religious services. Medical experts have said that, to blunt the sharp increase in coronavirus cases and related COVID-19 illnesses that could strain the medical system, people should avoid large crowds as much as possible.

Among those also counseling Spell has been former state Rep. Tony Perkins, who has allowed Spell to join him on conference calls with the Trump administration and their response to the pandemic.

“If I thought this was an attack on religious freedom, I’d be right there with him,” said Perkins, who serves as president of the Family Research Council. “It’s a directive for the sake of public health not to meet.”

Tony Spell, the pastor of Life Tabernacle Church in Central, plans an outdoor service for his church of nearly 1,200 people Sunday morning aft…

A man who was apparently a member of Spell's congregation appeared at the police station on Hooper Road and attempted to speak to officers, but couldn't get inside. He shouted that the police were "anti-God" and "weasels." The man refused to give his name.

Though legal experts say law enforcement officials have authority to enforce limits on crowd size, sheriff's deputies and Central city police officers hadn't acted to halt Spell's services until Tuesday. But, in the day and a half leading up to Spell's citation Tuesday, the rhetoric from Edwards, Mayor-President Sharon Weston Broome and District Attorney Hillar Moore had notched up noticeably.

“The order is to protect everyone and not infringe on anyone's rights,” Moore said. “This is a serious, deadly emergency.”

Reached after city leaders held a midday news conference about Spell's arrest, the Pentecostal preacher said he understood the potential consequences of continuing to have public religious services but intended to go forward with additional gatherings.

Spell asserted that he is operating under his constitutional rights and under a mandate given to him by Jesus Christ, "who said do not forsake to assemble together."

Spell added that government authorities were throwing away the nation's Constitution under a "COVID hoax" that hasn't had the level of medical toll and death that, he says, experts had initially predicted would happen at this point. He called the fears about the virus a "politically motivated scheme to shut the doors on America's churches and we refuse to shut our doors."

Those comments prompted "Amens" and some applause from a small group of people who were gathered with him in the Life Tabernacle worship area.

At the end of the interview Tuesday, Spell and other members of his church prayed over an Advocate reporter to continue providing fair news coverage of the situation.

In the Tampa Bay area, authorities arrested a pastor who had held large services in violation of the county’s ban on large gatherings.

At least one religious service in Illinois has been linked to an outbreak of coronavirus that infected more than three dozen people, according to The Chicago Tribune. State leaders in Arkansas also reported a similar outbreak that saw dozens sickened at a rural church 70 miles north of Little Rock.

Edwards, after declaring a public emergency, has directed that no one gather in groups larger than 50; the president has suggested groups no larger than 10. The governor has also issued a stay-at-home order for people who do not have essential jobs in businesses such as home construction, groceries and health care.

Most churches have complied with the orders, in Louisiana and elsewhere, accommodating parishioners by moving services and Bible studies online.

Edwards said Tuesday he was disturbed by the church continuing to hold large services.

“It’s unfortunate that a leader … would choose and make the conscious decision to violate what is a legal order which is imperative to public health,” Edwards said.