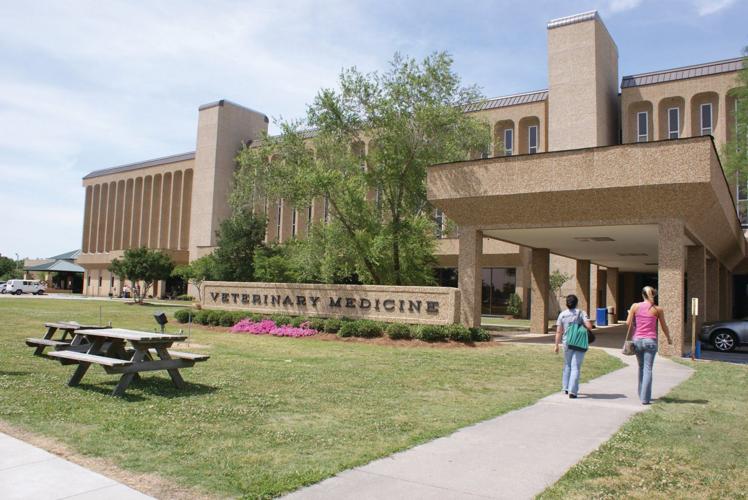 The LSU School of Veterinary Medicine has been awarded an $11 million federal grant to establish a center for pre-clinical cancer research that will work to develop more efficient anti-cancer drugs. 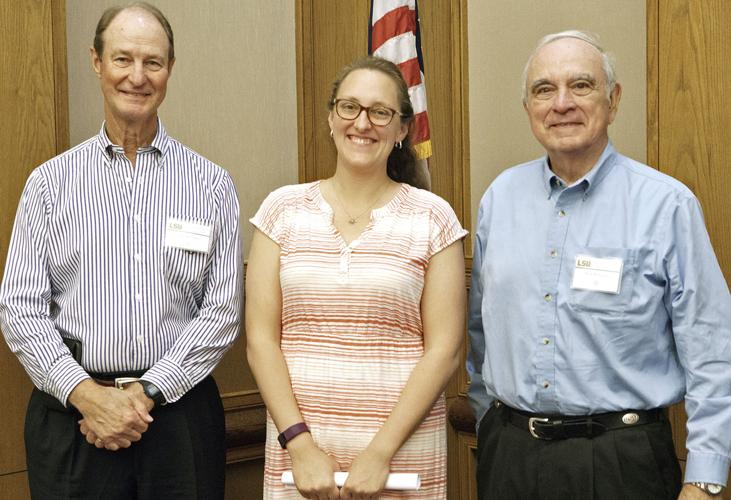 CONTRIBUTED PHOTO -- LSU Retirees -- Rebecca Christofferson, center, a pathobiological scientist at the LSU School of Veterinary Medicine, spoke to the LSU Faculty and Staff Retirees Club on Oct. 10 about arboviruses such as Zika and West Nile, which are transmitted by mosquitoes. With her are Bill Brown, left, and Ken Koonce.

The LSU School of Veterinary Medicine has been awarded an $11 million federal grant to establish a center for pre-clinical cancer research that will work to develop more efficient anti-cancer drugs.

CONTRIBUTED PHOTO -- LSU Retirees -- Rebecca Christofferson, center, a pathobiological scientist at the LSU School of Veterinary Medicine, spoke to the LSU Faculty and Staff Retirees Club on Oct. 10 about arboviruses such as Zika and West Nile, which are transmitted by mosquitoes. With her are Bill Brown, left, and Ken Koonce.

Potential coronavirus patients across Louisiana keep encountering the same problem: They visit a hospital, receive a coronavirus test and then they wait — sometimes for several days — until their results come back.

The delays have been frustrating for both patients and hospital staff, as they burn through already-limited masks, gowns and other protective equipment they may not have needed to use if a patient’s coronavirus results come back negative.

But new lab testing capacity at LSU could give coronavirus test results to the Baton Rouge area’s most critical patients and providers within 24 hours, as LSU researchers and hospital leaders from around the region have recently created, gotten federal approval and started running tests at a newly minted “River Road Testing Lab” at LSU’s School of Veterinary Medicine.

Long before most people recognized the threat the coronavirus would pose to Louisiana, two LSU researchers were far ahead of the curve, according to doctors and hospital leaders who have worked with them on coronavirus testing. Stephania Cormier, a respiratory immunology and toxicology expert, and Rebecca Christofferson, an infectious disease and emerging viruses expert, had the foresight to plan for how seriously the virus could affect Louisiana.

And when LSU Health Sciences professor Dr. Hollis “Bud” O’Neal Jr. was trying to figure out how to alleviate the bottleneck of coronavirus tests waiting for labs to run them, he reached out to the vet school virologists, hoping they might be able to help provide much-needed viral transport medium — the material used to transport samples to the lab. O’Neal, Our Lady of the Lake’s medical director of research and a pulmonary provider for Baton Rouge General, got more than he bargained for.

The number of the coronavirus cases, and deaths, in Baton Rouge and the surrounding areas continued to climb Thursday as leaders in East Baton…

Cormier and Christofferson not only could provide the media, but also had the capability to run PCR-testing for coronavirus in their labs, which is a polymerase chain reaction that detects genetic components of coronavirus. They worked with O’Neal and other hospital officials on a plan to meet the regulatory hurdles, which included bringing on Dr. Beverly Ogden, a pathologist with Pathology Group of Louisiana, as the new lab’s medical director.

“We are home-brewed, happened to be the right people in the right place talking to each other,” Ogden said. “It’s not a production line, it’s a small group of people making it work.”

Over the weekend — just five days ago — the LSU professors and a team of graduate students were working around the clock, trying to prove to federal regulators that they had the ability to run rapid testing for coronavirus samples. They received their federal license Monday, thanks to a fast-tracking process.

By Thursday, the lab was running tests for under 100 patients a day, O’Neal said. As the lab ramps up, it should be able run twice that many — two runs a day for 95 or so patients each.

“Our goal was never to be a massive testing center,” O’Neal said. “Our goal was to decompress the hospitals in the Baton Rouge area as much as we can, to move patients in and out.”

Amid calls for social distancing to slow the spread of the novel coronavirus, Louisiana health care workers are warning that blood for hospita…

Our Lady of the Lake, Baton Rouge General, Woman’s Hospital and other area hospitals are now sending the samples that need the quickest turnaround to the LSU lab. O’Neal also said they hope to make use of the lab’s rapid turnaround time for testing of outbreaks at nursing homes, where state officials have identified six separate outbreak clusters. And they want to use the lab for testing of potential coronavirus samples from first-responders, whose results are especially important.

Edgardo Tenreiro, Baton Rouge General’s CEO, said his hospital has been getting results back from the LSU lab in six to 12 hours, much faster than commercial labs, which often take up to a week. State lab tests generally come back more quickly than commercial lab tests, but still typically take two to three days.

Tenreiro also signed off on the purchase order for a second machine for the lab to do PCR testing, in case the current machine breaks down or in case they need to increase test volume.

“Obviously the machine is not built to be a high production machine, so we’re concerned we need to have redundancy in that process,” Tenreiro said.

Baton Rouge General fronted $66,000 for the second machine, which he said they will figure out how to pay for on the back-end. It should arrive by the end of March.

The LSU researchers demurred from accepting too much credit in a statement that says Baton Rouge Clinic, Baton Rouge General, Our Lady of the Lake and Woman’s Hospital were their partners in collecting lab samples.

“Together, we are easing the burden on the other labs throughout the state,” said Ginger Guttner, the veterinary school’s communications manager, who added that Cormier and Christofferson were putting their sole concentration “on the work right now.”

The Baton Rouge Health District is also supporting the effort, and is donating $30,000 to the LSU Foundation to cover some of Cormier’s upfront costs for testing materials, said John Spain, executive vice president of the Baton Rouge Area Foundation.

Our Lady of the Lake’s CEO Scott Wester made the first public mention of the new lab testing site Thursday during a conference call, when he referred to it as “a remarkable feat.” Hospitals across Louisiana are increasingly turning toward new avenues for testing as coronavirus cases keep growing statewide.

The number of positive coronavirus cases in Louisiana continues to grow throughout the state Thursday, health officials report.

“The state lab is under tremendous pressure, they’re working 24/7. They’re also doing phenomenal work,” Tenreiro said. “I just hope this lab we stood up is, in a small way, helping to alleviate their pressure.”

Ochsner Health System executives announced Wednesday they had added in-house testing in New Orleans and Shreveport. That addition gave Ochsner the ability to ramp up testing from about 400 per day to 700 per day, and they expect to be able to run about 1,000 tests per day by next week — also with rapid turnaround rates.

O’Neal said the creation of the River Road Testing Lab showed that LSU’s virologists are world-class. He said that all too often, Louisiana's lack of investment in higher education causes the state to lose its best researchers like Cormier and Christofferson.

“This is why we need to support higher education in Louisiana,” he said. “You don’t think about it much, but in a crisis, this is who you need.”

Editor's note: This story was updated March 28 to clarify the typical turnaround time for tests done at the state's lab.

A member of the LSU community in Baton Rouge tested positive for the coronavirus Thursday, bringing the total positive case count for the camp…