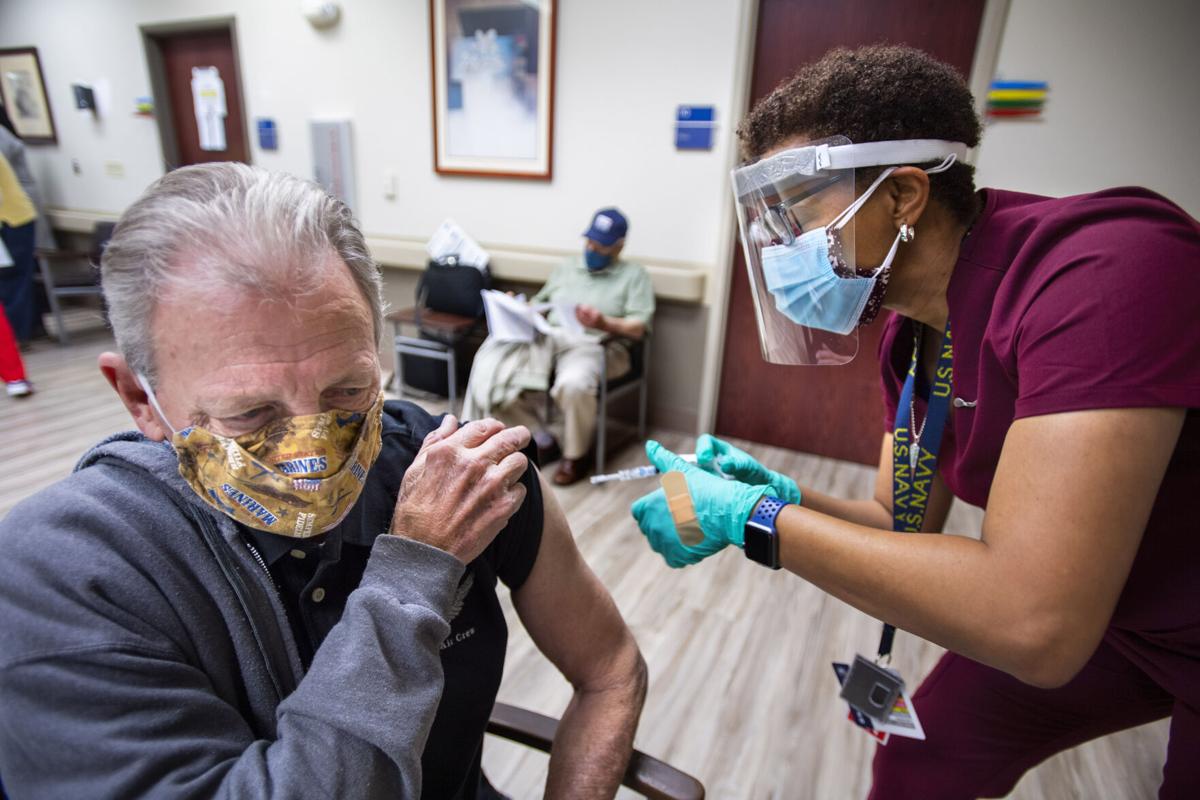 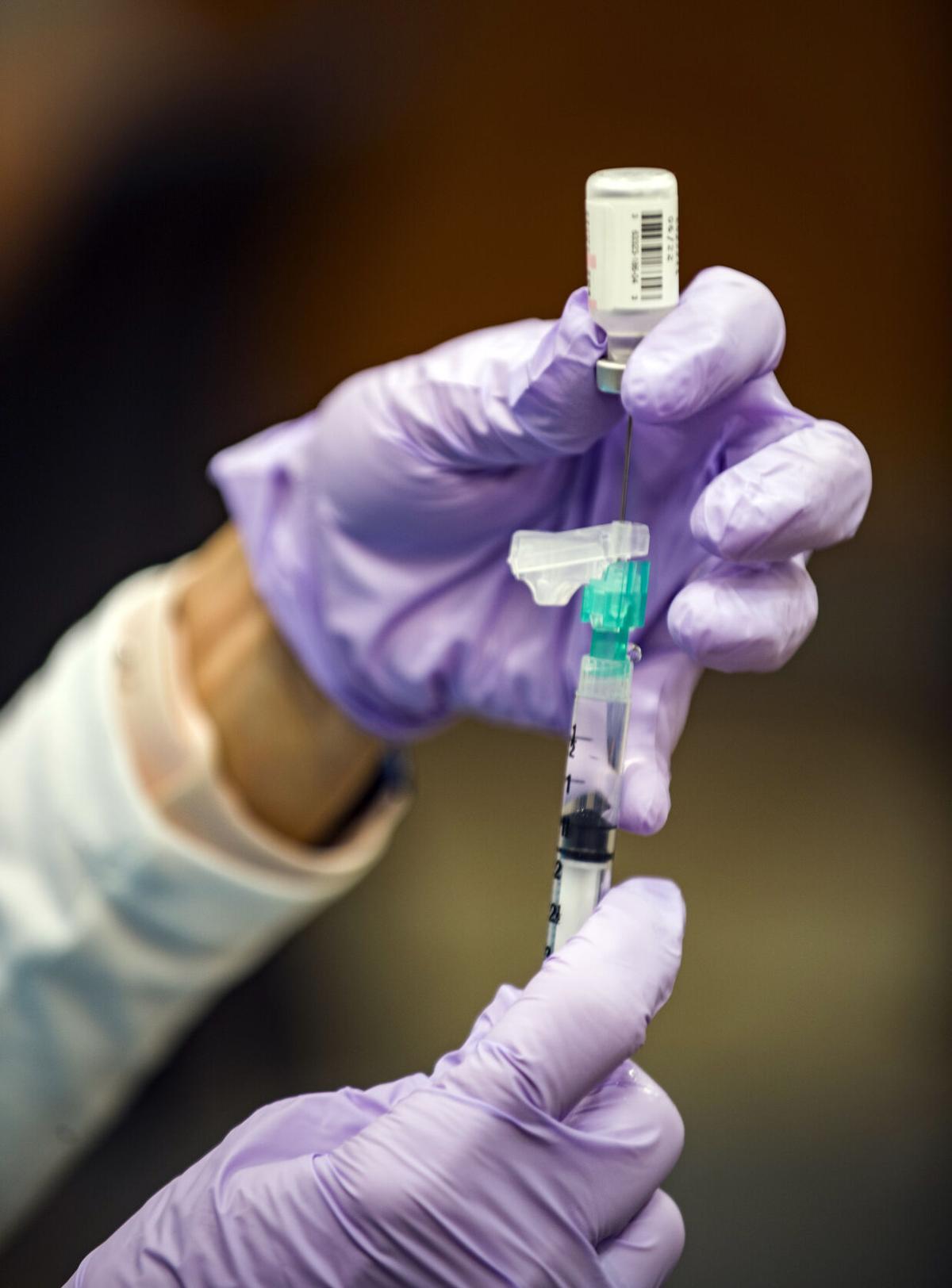 Cyd Begnaud, RN, fills a syringe with the Covid-19 vaccine Thursday, December 17, 2020, at Our Lady of Lourdes Regional Medical Center in Lafayette, La. 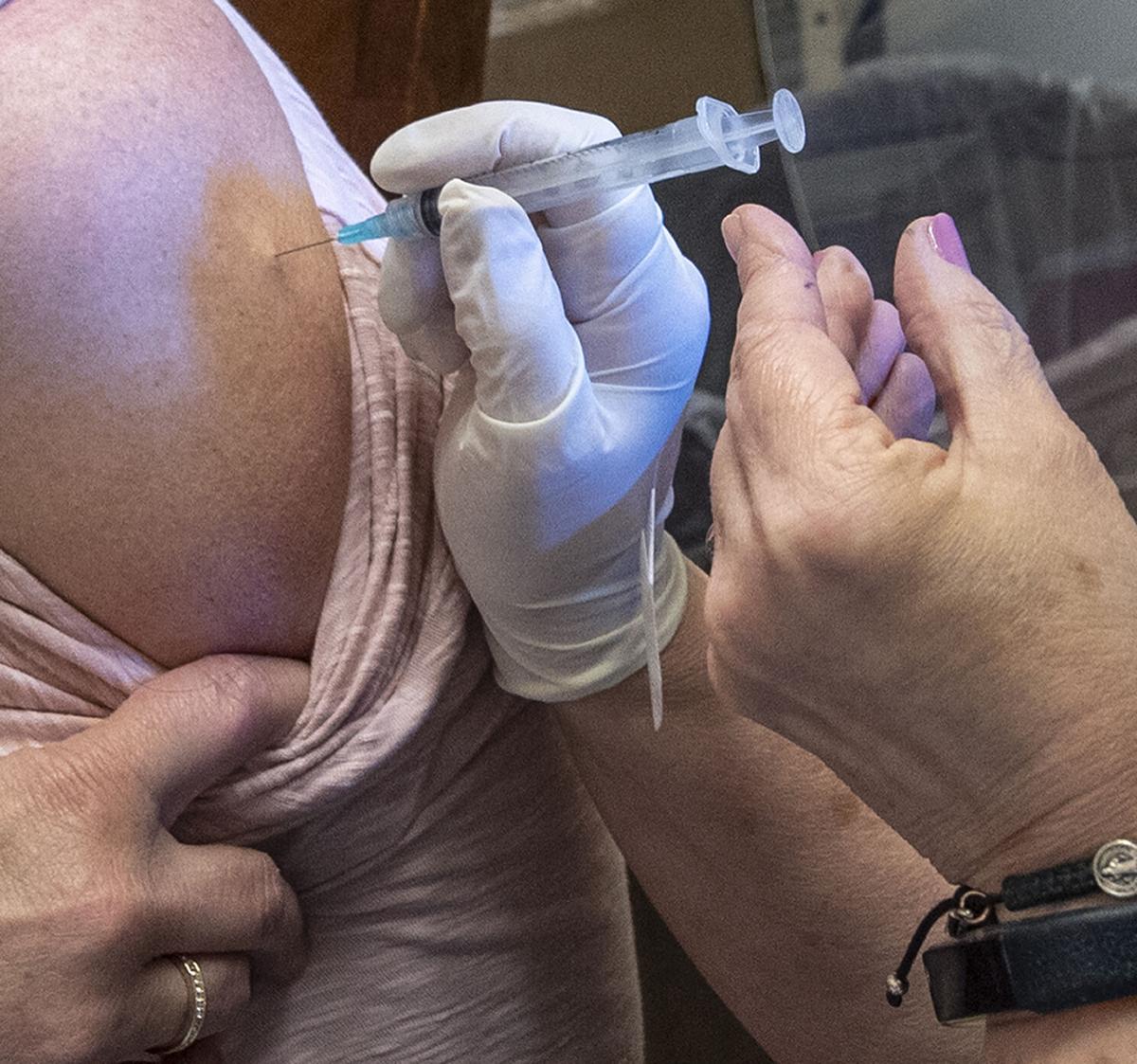 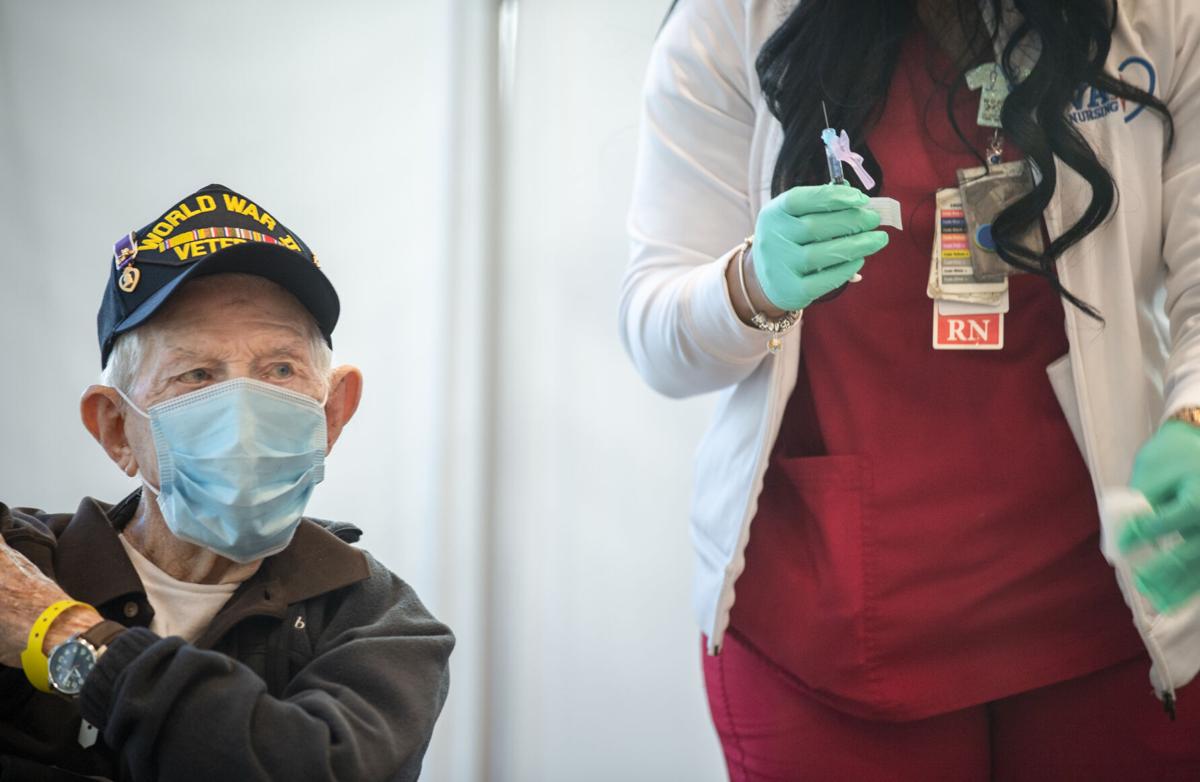 Kelly Bell, CNL, gets ready to give Bob Stanley, a 97-year-old World War II veteran, a COVID-19 vaccination at the Veterans Hospital in New Orleans on Monday, January 4, 2021. (Photo by Chris Granger | The Times-Picayune | The New Orleans Advocate)

Cyd Begnaud, RN, fills a syringe with the Covid-19 vaccine Thursday, December 17, 2020, at Our Lady of Lourdes Regional Medical Center in Lafayette, La.

Kelly Bell, CNL, gets ready to give Bob Stanley, a 97-year-old World War II veteran, a COVID-19 vaccination at the Veterans Hospital in New Orleans on Monday, January 4, 2021. (Photo by Chris Granger | The Times-Picayune | The New Orleans Advocate)

After a slow start, Louisiana’s decision to make vaccines available to people aged 70 and older has kicked the mass COVID-19 vaccination effort into a higher gear, with more than 170,000 people receiving at least one shot.

Louisiana in recent days has climbed the ranks of U.S. states in the share of its population receiving a vaccine. After sitting in the bottom 10 at the start of the effort last month, Louisiana now ranks 17th among states and the District of Columbia, according to data from the U.S. Centers for Disease Control and Prevention.

Several providers say their biggest challenge now is getting enough doses to immunize the thousands of people waiting. That’s a turnaround from the first three weeks, when health workers at hospitals were slow to get vaccinated and demand wasn't meeting supply. Gov. John Bel Edwards’ administration on New Year’s Eve expanded eligibility to include people aged 70 and older and a broader range of health workers, and doses began arriving Jan. 4 to pharmacies around the state. This week, the state also took about 17,410 doses of vaccines that were sitting on shelves to push out to the public, augmenting its weekly shipment from the feds.

At Our Lady of the Lake Regional Medical Center’s network of hospitals, staffers are reaching out to elderly patients who fit the criteria to schedule vaccine appointments, said Dr. Jimmy Craven, president of the system’s employed physician practice.

But until the hospitals can get more certainty they will receive a steady stream of vials, Craven said the system isn’t prepared to open up its digital scheduling process to its roughly 60,000 patients, or to the hundreds of thousands of people who aren’t Our Lady of the Lake Patients.

“Our concern is an inability to access the vaccine,” he said. “How do you schedule someone for something not knowing if you have it to deliver on what you’re scheduled for?”

The Louisiana Department of Health roughly doubled the number of pharmacies and other providers receiving doses for the elderly and other patients in the current eligibility group this week. But this week’s shipment to providers was bolstered by the 17,410 doses that were going unused. Because of that, the state has warned that all providers might not receive shipments again next week.

Louisiana Department of Health spokesperson Aly Neel said the state expects to receive 58,150 doses next week, split roughly equally between Pfizer’s and Moderna’s vaccines. This week, about 56,000 doses were allocated to Louisiana, but 18,700 were diverted to a federal program for nursing homes and other long-term care facilities. It wasn't clear Thursday whether any doses would be diverted to that program next week.

Just as providers are waiting on more certainty about supply, state officials are also hoping the federal government will provide clarity on the state’s allocations. While the federal government said this week it was going to stop holding back second doses to speed up the delivery, Dr. Joe Kanter, head of coronavirus response at the Louisiana Department of Health, said Louisiana will have to hold back many of those doses on its own. Both Pfizer’s and Moderna’s vaccine require second doses to be administered weeks after the first one.

“Until the federal government is able to give us a more predictable cadence of vaccine deliveries, we’re going to have to be thoughtful about those second doses and make sure those second doses are available to patients when their 21 or 28 days are up,” Kanter said earlier this week.

Louisiana added more than 100 pharmacies and other providers administering vaccines to elderly patients across the state on Monday, as officia…

Craven, of the Lake, said the system has received about 20,000 doses and administered 15,000 – roughly 4,000 of which have gone to seniors who are patients of the hospital. The remaining doses are scheduled to be shot into arms next week, he said.

And the hospital is planning to establish a mass vaccination site in the Baton Rouge area soon, Craven said.

Alex Nguyen, a pharmacist at Westbank Pharmacy in Harvey, said there are still a few hundred patients on the pharmacy’s waitlist, after it was inundated with thousands of phone calls in the hours after the state released a list of providers that would be receiving 100 doses last week.

After receiving another 100 doses this week, Nguyen said the pharmacy has administered roughly 150, and will use up the rest of its supply in the coming days.

Thousands more doses of COVID-19 vaccines will be distributed to pharmacies across the state next week, with Gov. John Bel Edwards promising t…

Pharmacist Randy Carr, of Carr Drugs in Algiers, said last week, when pharmacies around the state first received doses, his wife brought in three of her sisters to help answer the phones because the staff was drowning in phone calls from patients, eager to receive the shots.

The pharmacy put patients on a waiting list, and when Carr received the second shipment of doses this week, the staff started scheduling more appointments. Some patients on the waiting list have said they found the vaccine elsewhere – 210 pharmacies and other providers, along with major hospital systems, now have vaccines – and no longer needed them.

Louisiana has shot about 201,000 doses into arms, according to state data updated Thursday, and the CDC says 370,000 doses have been distributed to the state, meaning about 54% of the doses have been used. Roughly 90,000 doses were diverted to a federal partnership with CVS and Walgreens to immunize staff and residents of long-term care facilities like nursing homes.

Compared to other states and Washington, D.C., Louisiana tied four other states at 9th in the percentage of doses distributed that have been used, at 47%. That number is lower because the CDC data only takes into account first doses, excluding the roughly 31,000 second doses Louisiana has reported administering.

West Virginia leads the pack, having used 74% of the doses distributed to it so far, CDC data show.