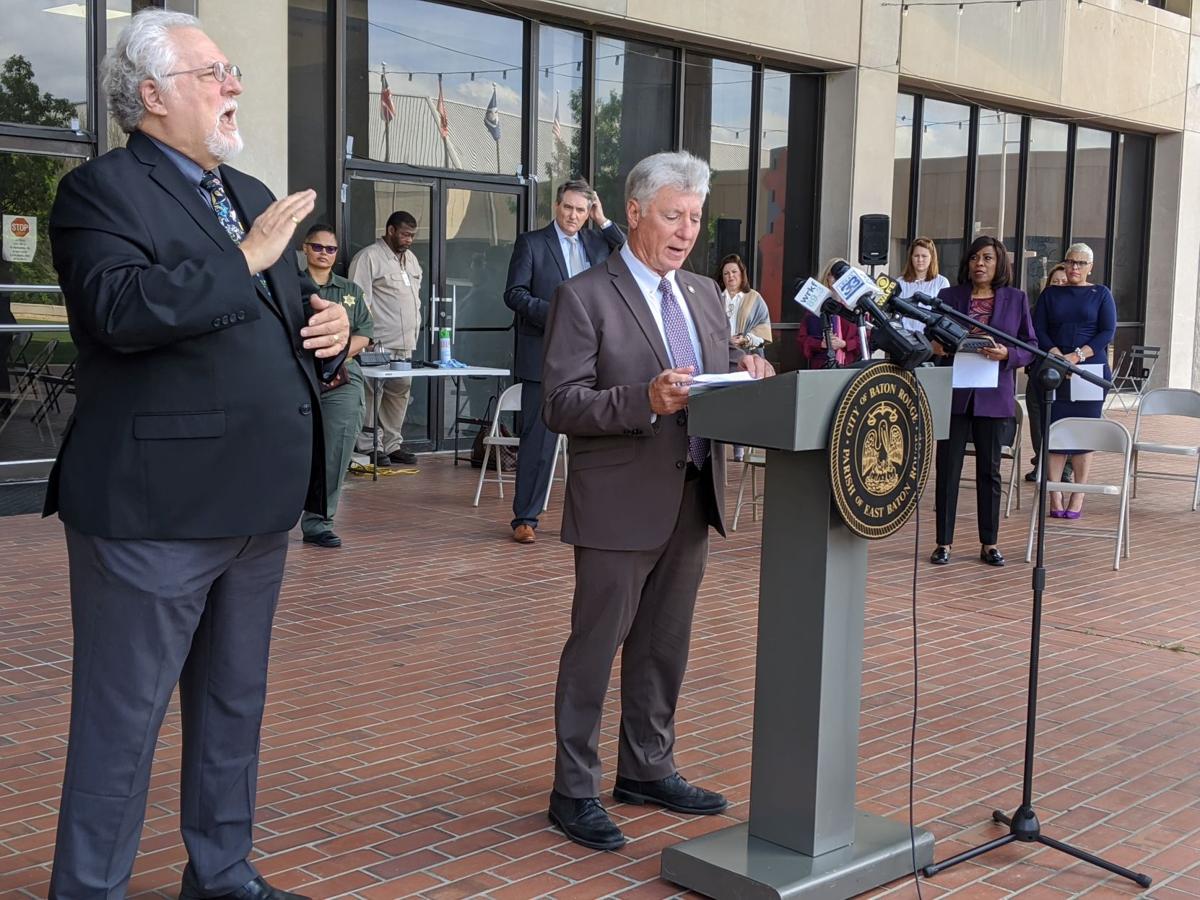 East Baton Rouge District Attorney Hillare Moore III speaks about domestic violence deaths from the previous year at a press conference Friday, March 27, 2020. He was joined by the mayor-president, law enforcement leaders and community advocates to speak about the potential increase in domestic violence as the coronavirus pandemic keeps victims trapped at home with their abusers.

East Baton Rouge District Attorney Hillare Moore III speaks about domestic violence deaths from the previous year at a press conference Friday, March 27, 2020. He was joined by the mayor-president, law enforcement leaders and community advocates to speak about the potential increase in domestic violence as the coronavirus pandemic keeps victims trapped at home with their abusers.

The day after Ronnie Kato allegedly killed his girlfriend's stepfather and Lt. Glenn Hutto in separate shootings April 26, Moore swiftly announced he plans to pursue the death penalty against the 36-year-old man.

Moore acknowledged, however, that the plan could change after he speaks with the victims' families.

The district attorney also noted on April 27 that his office "rarely seeks the death penalty" -- a statement borne out by the facts -- and only does so "in the most serious of cases."

Moore said Friday that deciding whether to pursue the death penalty in a particular case is never a cookie-cutter decision.

"When we determine that a case legally qualifies as a capital case, we weigh many factors to determine whether justice requires that we pursue a capital sentence," he said.

Moore said critical factors are "whether the facts of the murder are heinous, and the proof of guilt is overwhelming."

"The decision to seek the death penalty is never one that is easy to make or one that we are happy to do, but in certain cases it is the only right thing to do, especially with the agreement of the victims' family," he explained.

"The wishes of the victims’ families are always important to us, but ultimately it falls on our office to make the decision to pursue death," he said.

If Kato's case remains a death penalty case, it would mark only the third such prosecution by Moore's office since he took office in January 2009 as East Baton Rouge's chief prosecutor.

In 2010, a St. Louis man, Dacarius Holliday, was convicted of first-degree murder and condemned to die in the 2007 beating death of his Baton Rouge girlfriend's 2-year-old son. The Louisiana Supreme Court reaffirmed his conviction and sentence last month, and he remains on death row at Angola.

A St. Louis man’s conviction and death sentence in the fatal 2007 beating of his Baton Rouge girlfriend’s 2-year-old son have been reaffirmed …

The second death penalty prosecution by Moore's office came five years later in 2015, when Lee Turner Jr. was found guilty on two counts of first-degree murder and sentenced to death in the 2011 slaying of two CarQuest Auto Parts employees at the company's Airline Highway store near Siegen Lane.

The state Supreme Court in late 2018 affirmed Turner's convictions. But it threw out his death sentence because the trial judge issued a ruling during jury selection that prevented the defense from inquiring into prospective jurors' ability to fairly consider voting for a life term in a case involving a double murder committed during an armed robbery.

Turner, who is no longer on death row, has not been resentenced.

In Kato's case, Moore has said seeking the death penalty "is what justice would demand" because of the "egregious" facts of the case.

Hutto was shot and killed, and Cpl. Derrick Maglone was seriously wounded and remains hospitalized.

Since the U.S. Supreme Court reinstated the death penalty in 1976, Louisiana has executed 28 condemned inmates.

But executions in the state have been on hold since 2014 when the late U.S. District Judge James Brady, of Baton Rouge, temporarily stayed them as a result of a lawsuit challenging Louisiana's lethal injection protocols. Chief U.S. District Judge Shelly Dick extended Brady's order indefinitely after his death.

The state's last execution was a decade ago, in January 2010. Gerald Bordelon waived his appeal and was put to death for kidnapping, molesting and strangling his 12-year-old stepdaughter, Courtney LeBlanc, in 2002. He led police to her body in a wooded area by the Amite River in Livingston Parish. Bordelon was a convicted sex offender at the time of the killing.

Prior to Bordelon's execution, the last execution in the state was in 2002 when Leslie Dale Martin was put to death for the 1991 rape and killing of Christine Burgin, a 19-year-old McNeese State University student. Her body was found in a shed near Iowa, in Calcasieu Parish.

It's been two decades since a condemned East Baton Rouge Parish killer was put to death. Feltus Taylor Jr., executed in June 2000, was sentenced to death for fatally shooting a Cajun's Fabulous Fried Chicken cook, Donna Ponsano, at the Florida Boulevard store during a 1991 armed robbery. Taylor was a former employee. He also shot store manager Keith Clark in the head, but he survived.

Moore said he is aware of the time, effort and money that death penalty cases cost his office and the stress it places on his staff.

"Additionally the length of time that it takes, not only to get to a trial date but to exhaust appeals, is around 20 years," he said. "All of these factors are known and considered but do not drive the decision as to whether the facts surrounding the murder justify asking a jury to consider the appropriate punishment, life or death."

Moore said the uncertainty of the future of the death penalty is always discussed with victims' families, as is the duration of appeals in death penalty cases.

"Often time these facts weigh in on their views on how they wish that we proceed. Generally these are not decisions that can be made early on in the process and sometimes views may change," he said.

Moore said it's not uncommon for survivors of murder victims to "never see the end of the quest for justice as the lengthy and cumbersome appeals process outlives them."

Last year, Moore's office announced it would not pursue the death penalty against three Ethel men in their 20s accused in the March 2019 killing of 73-year-old Frances Jane Schultz, who was tied up with duct tape and shot in the head multiple times during a burglary of the Zachary home she and her husband shared.

Death penalty not being pursued against 3 Ethel men in slaying of 73-year-old Zachary woman; widower wants justice before he dies

Art Schultz wants to see his wife's slayers brought to justice before his life ends, and that's the reason prosecutors chose not to pursue a d…

Art Schultz, 77, told prosecutors he wants to see his wife's killers brought to justice before his life ends. So the three men, brothers Adrian and Courtland Curtis, and Donevan Brown, were indicted on second-degree murder and aggravated burglary charges. They had been booked on first-degree murder charges that could have carried a death sentence. Second-degree murder carries a mandatory term of life in prison.

Moore has said he and Art Schultz agree that a death sentence would be an appropriate punishment if a conviction is obtained, but Schultz understands a capital murder prosecution is a very lengthy process.

Moore called Art Schultz’ request merciful and said it was one he chose to honor.