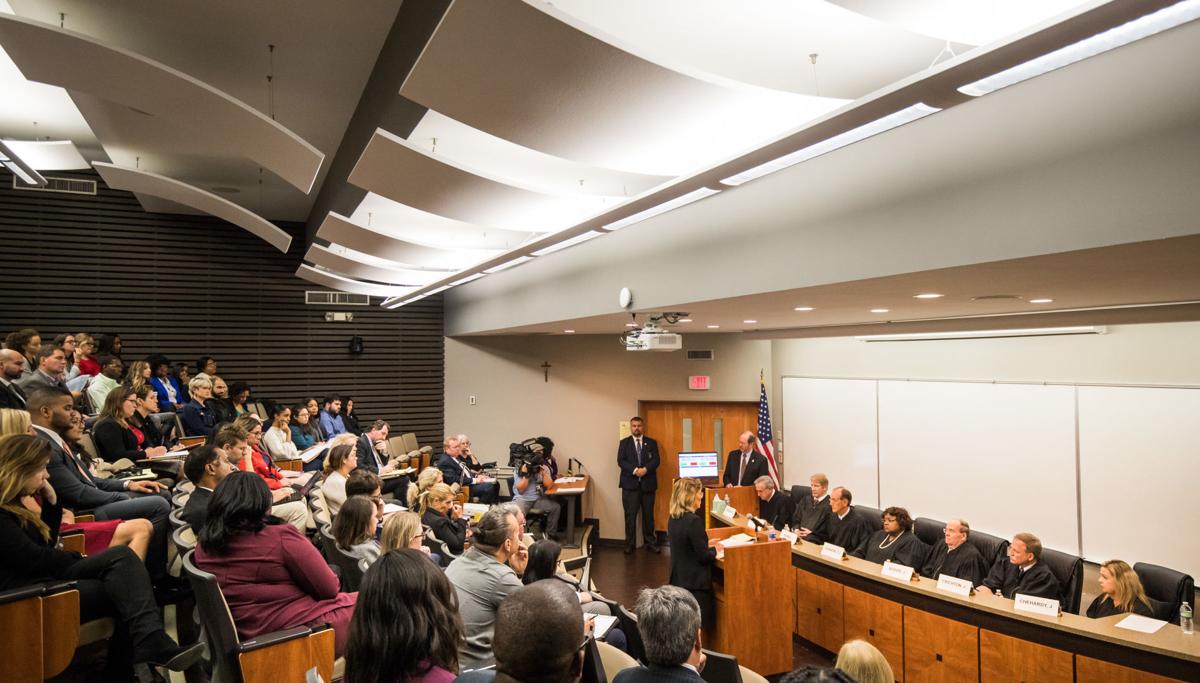 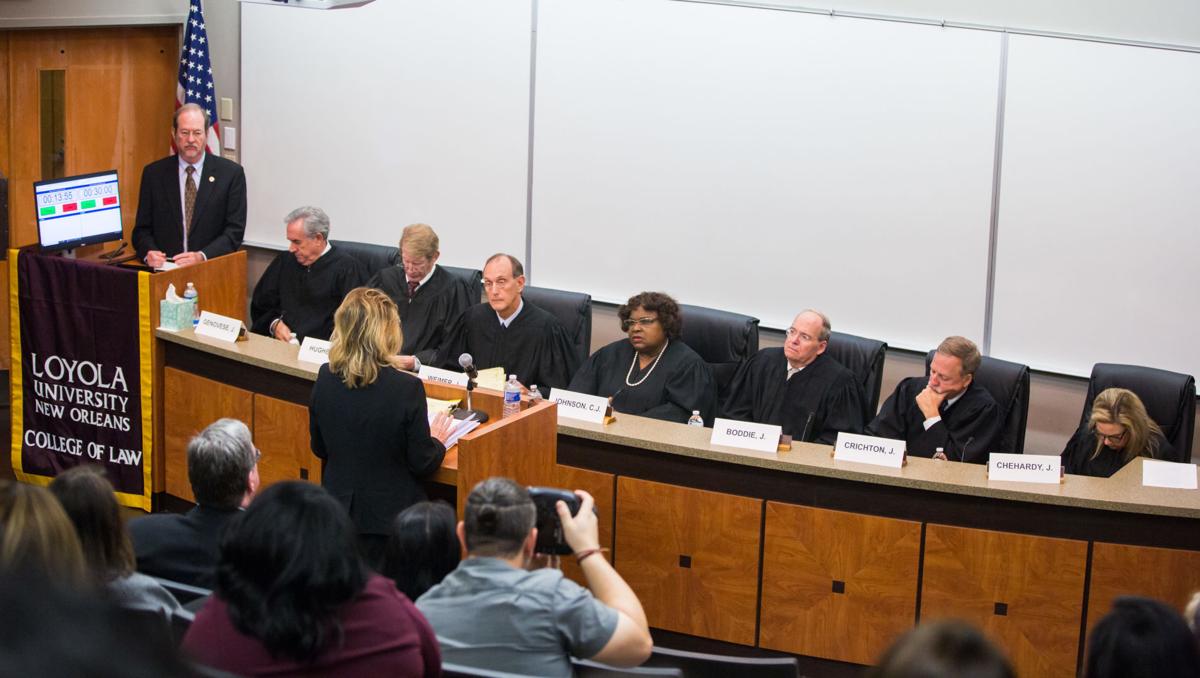 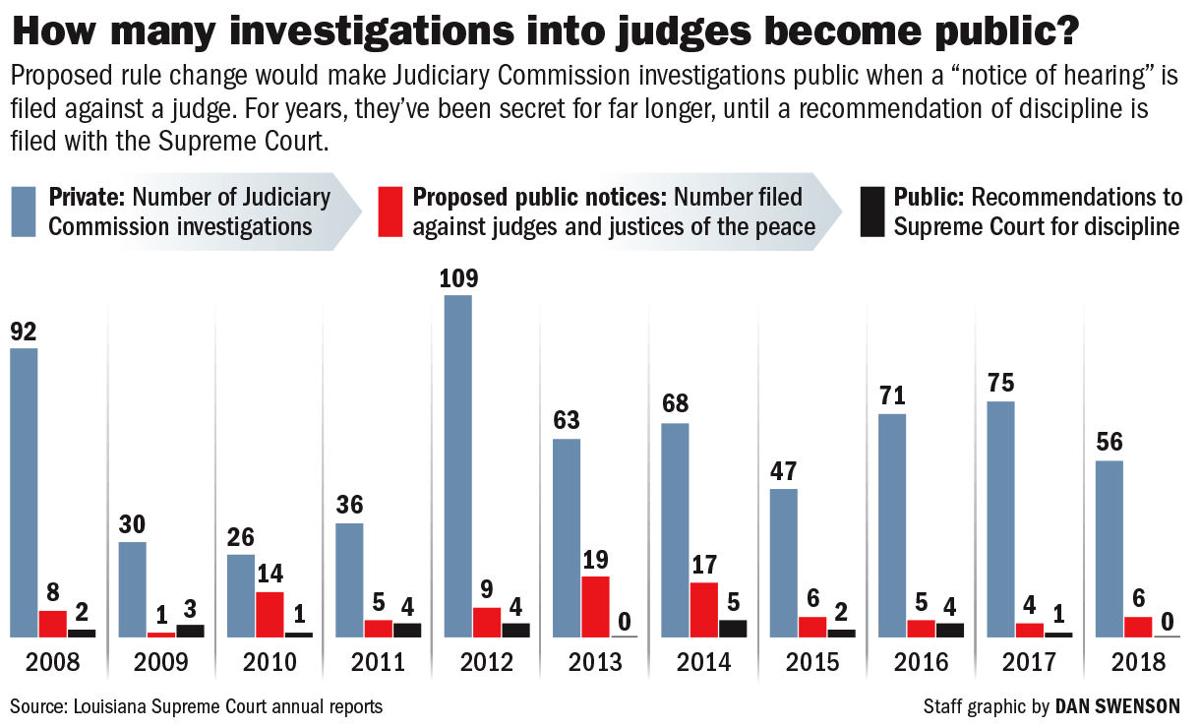 Reforms under consideration by the Louisiana Supreme Court would thrust about six additional judicial misconduct cases into public view in a typical year, using the case volume from the past decade as a benchmark.

The high court is mulling the change in an effort to shine more sunlight into the secretive process under which wayward judges are disciplined in Louisiana. The opacity of the current system has drawn fire since it was revealed last year that Supreme Court Justice Jefferson Hughes managed to win election to the high court despite having been ordered to write at least three secret apology letters to courtroom litigants from his time as a Livingston Parish district judge.

Officials with the Judiciary Commission, which oversees investigations into judicial misconduct, announced late last month that they were deliberating over whether to tinker with their rules, which have largely left the public in the dark. That news came as legislators began to file bills that would force the commission to lift gag orders for those who filed judiciary complaints and to post judges’ financial disclosures online.

The Supreme Court asked judges and attorneys to weigh in by March 6 on proposals that would make misconduct cases public once the Judiciary Commission has filed a “notice of hearing” against a judge, and the judge has had the chance to respond. By that point, the Judiciary Commission has made a determination that there’s enough evidence to start holding adversarial hearings.

Our Views: Ethics enforcement too vital to be left to fumbling Supreme Court system

Louisiana’s Supreme Court contends that it is an independent branch of government, so it can set its own rules for ethics enforcement and disclosure.

But within the same time frame, 14% of cases that the Judiciary Commission deemed worthy of investigation reached the “notice of hearing” stage that the Supreme Court is contemplating as a new threshold for making a case public. The number of cases to trigger a notice of hearing has been as low as 1 and as high as 19.

Using that threshold to make investigations public would shine more light onto judicial misconduct, but it would hardly represent complete transparency, given that only 1 in 50 cases even reach the “notice of hearing” stage.

Even with such low odds of potential misconduct being outed, judges have apparently been resistant, observers say.

“Judges I talk to don’t particularly like it,” said Dane Ciolino, a Loyola Law School professor and legal ethics expert who frequently defends judges against complaints. He cited a fear of complaints providing fodder for attack flyers and TV ads during election season.

“I haven’t heard anyone say anything favorable about it,” he said. “They don’t like anything being public.”

With multiple bills that target their authority looming in the Legislature, Louisiana Judiciary Commission officials announced Saturday that t…

But Ed Walters, the Judiciary Commission’s chairman, and Fifth Circuit of Appeal Judge John Molaison, the commission’s vice chairman, lauded the proposals in a recent letter. They described the proposals as measures that would help “maintain judicial independence, respect the judiciary as a co-equal branch of government, and protect the public who have called for increased transparency.”

The first two bullet points likely reflect the judiciary’s discomfort with the Legislature playing a role in deciding how judges should be investigated and disciplined.

Even if the Supreme Court chooses to adopt the rule changes, it’s likely that most complaints will continue to be resolved outside of the public eye.

The Judiciary Commission’s rules also allow for judges to receive private reminders, cautions and admonishments before a full hearing, and data suggests those are the paths most often taken. Over the past decade, 86% of cases that the Judiciary Commission investigated were resolved before they reached the “notice of hearing” stage.

The commission can also offer a “deferred recommendation of discipline agreement” to judges under investigation, in which a judge agrees to accept a private admonishment and to perform a penance in exchange for keeping the matter under wraps.

If the Supreme Court adopts the proposal, it’s possible the public could learn about reminders, cautions or admonishments on the rare occasion that those dispositions are the outcome of a hearing, rather than a tool that judges accept to avoid hearings to begin with.

The Judiciary Commission’s proposed rule changes could also limit judges to a maximum of one private admonishment within five years, but with a couple of caveats: both the judge on the receiving end and the Supreme Court would have to approve of issuing a public admonishment.

“What is public before the Court approves and what is public if the Court denies the issuance of the public admonishment are details that are still under consideration,” said Supreme Court spokesman Robert Gunn.

If the judge under investigation does not accept a public admonishment, the Judiciary Commission would move to the next phase in its process, potentially by calling for a fuller investigation or releasing a notice of hearing.

Ciolino argued that the 5-year window is arbitrary and if “the conduct is so minor that they gave an admonition,” there shouldn’t be a limit on how many of them stay secret.

Judge resigns after racist texts, affair with top deputy; says she quit to 'stop the madness'

Two-term Judge Jessie LeBlanc, the heir to a family with deep political ties in Ascension Parish, resigned Thursday after facing a chorus of c…

“Everybody makes mistakes,” he said.

While State Rep. Jerome “Zee” Zeringue, R-Houma, has also filed a bill to increase Judiciary Commission transparency, it also would allow the Judiciary Commission to keep its options open for privately scolding judges before filing a “notice of hearing.” His bill would limit judges to a single private admonishment per term — one in 10 years for appeals court judges and Supreme Court justices, one in six years for district and lower court judges.

“The first one is kind of like a mulligan, allowing them the opportunity to address it with a judge,” Zeringue said. “But my intent is, once there is a second one, it becomes public and all aspects of the first one become public … We’re being somewhat generous in allowing the commission or the Supreme Court to address a particular problem with a judge.”

Our Views: Burying the judges' disclosure forms is embarrassment for Supreme Court

In 2008, Gov. Bobby Jindal and the Legislature pledged the state to attain the “gold standard” of ethics in government.

His bill would allow those who have filed complaints to discuss them at any time; the Supreme Court until recently barred people from discussing those complaints forever, unless they resulted in public discipline. Under pressure, the Supreme Court eased those rules last year to allow people to discuss complaints once a file was closed or once a notice of hearing was filed — unless the Judiciary Commission explicitly prohibits them from doing so.

Zeringue’s bill would also make all deferred recommendation of discipline agreements public, regardless of whether such an agreement came before or after a “notice of hearing.” And notices to begin adversarial proceedings would automatically become public. The Judiciary Commission’s proposal would only make those notices public once a judge responds, and the notices would remain private if a judge resigns or retires after receiving one.

Zeringue is also asking the Legislature to consider putting a constitutional amendment on the ballot that would give lawmakers constitutional authority to regulate the Judiciary Commission’s confidentiality rules. The Louisiana Constitution currently leaves that job to the Louisiana Supreme Court, setting up a clash between judges and legislators over separation of powers.