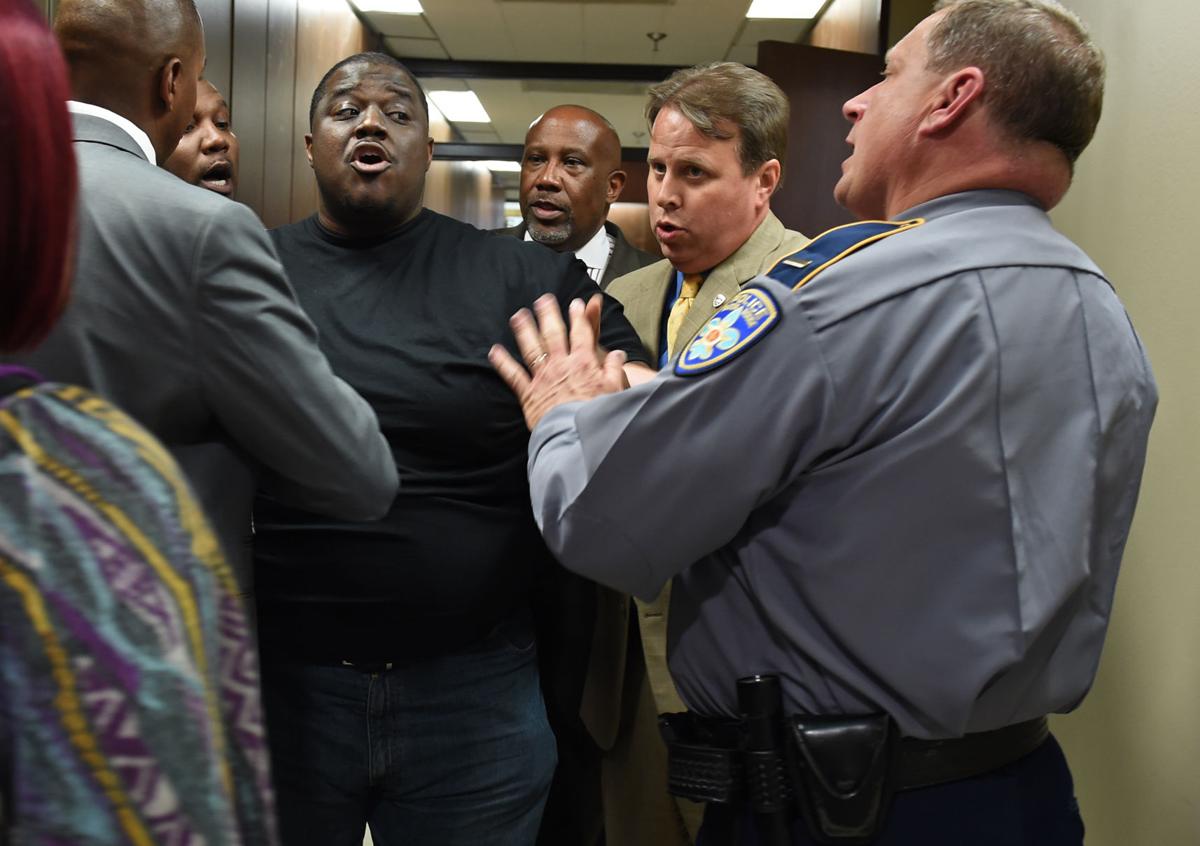 Blogger Gary Chambers is removed from the Metro Council chambers after creating a disturbance. He continued disruptive behavior and resisted police commands and was arrested on charges of disturbing a public meeting and resisting a police officer. 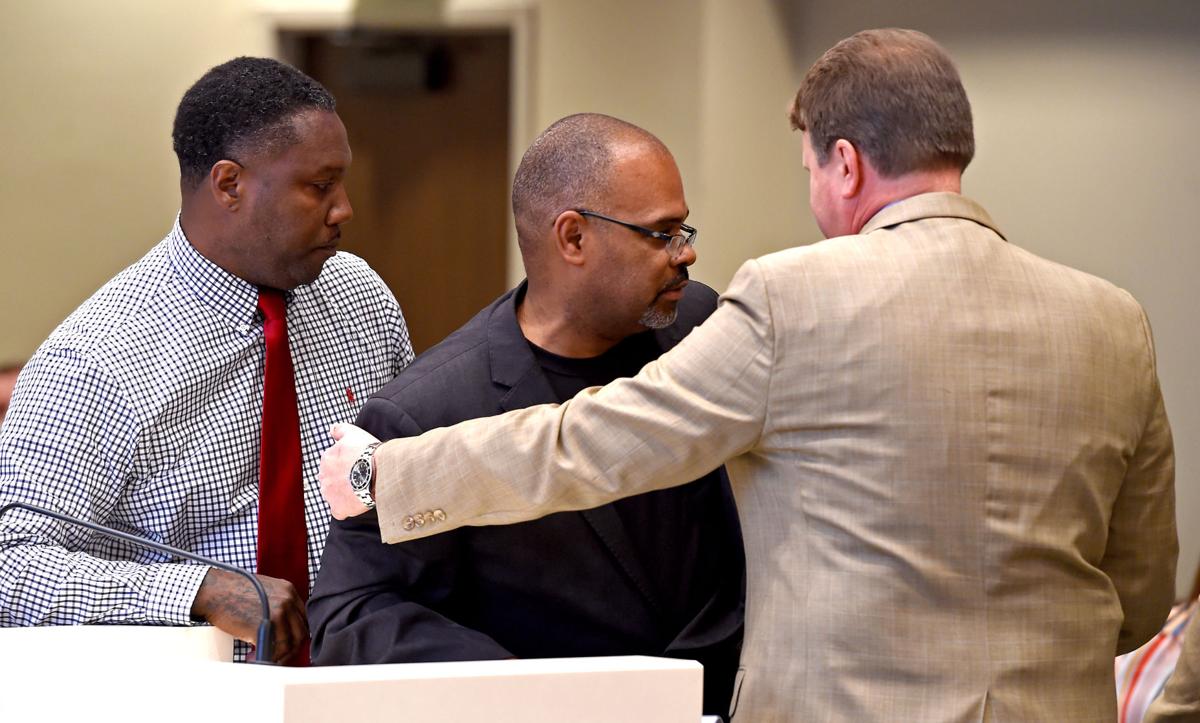 Mike McClanahan, center, president of the Baton Rouge NAACP is removed from the Metro Council chambers after creating a disturbance while protesting the Alton Sterling killing last July. 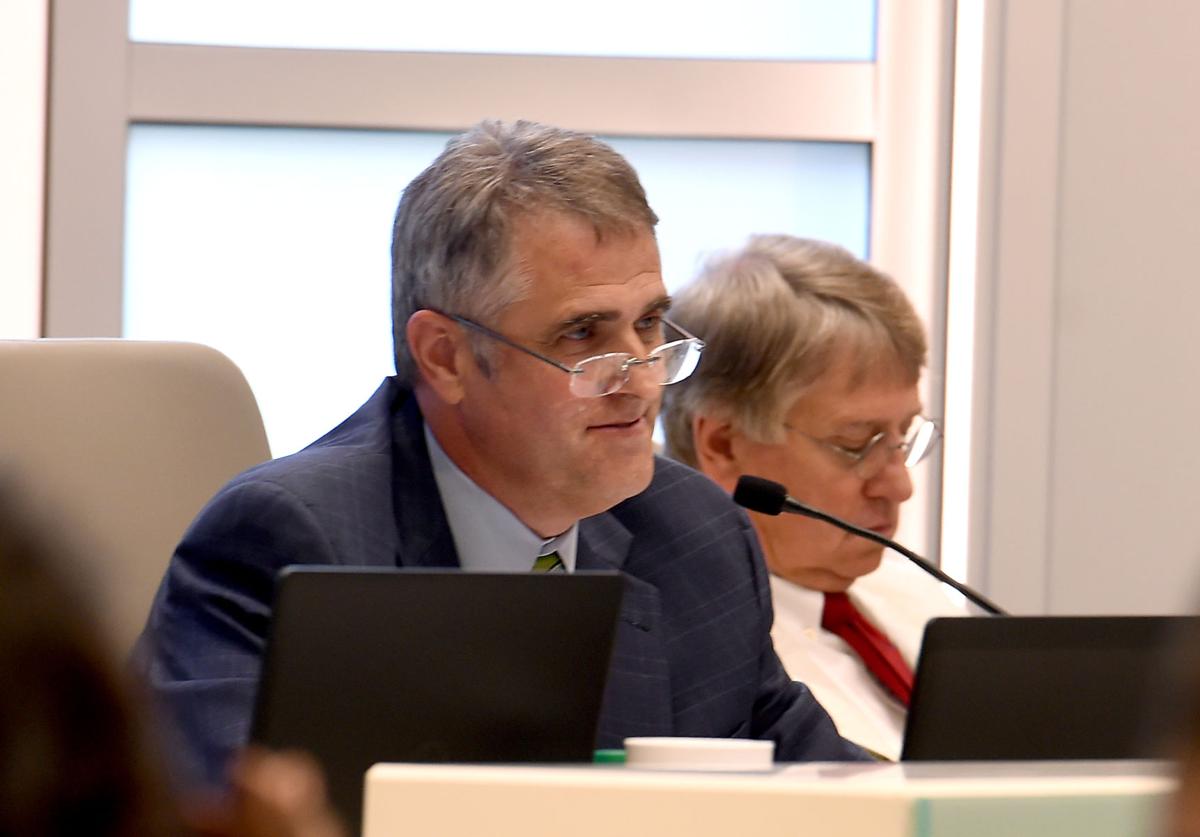 Blogger Gary Chambers is removed from the Metro Council chambers after creating a disturbance. He continued disruptive behavior and resisted police commands and was arrested on charges of disturbing a public meeting and resisting a police officer.

Mike McClanahan, center, president of the Baton Rouge NAACP is removed from the Metro Council chambers after creating a disturbance while protesting the Alton Sterling killing last July.

Blogger and community activist Gary Chambers, who was removed from a 2017 Metro Council meeting and arrested after trying to discuss the Alton Sterling case during a public hearing on another matter, told a federal judge Wednesday he had never seen anyone ejected from the council room for expressing their views.

But during that May 10, 2017, council meeting, Chambers and two other Black men, former NAACP Baton Rouge chapter president Mike McClanahan and current chapter president Eugene Collins, were among six city-parish residents escorted from the council chambers for doing just that.

Chambers, McClanahan and Collins filed a federal lawsuit later that year against then-Mayor Pro Tem Scott Wilson and the city-parish, and on Wednesday the case went before U.S. District Judge John deGravelles for a trial without a jury.

Chambers testified during the trial, held as a Zoom meeting, that he has attended Metro Council meetings since 2015 and had never seen Wilson — who as mayor pro tem ran council meetings — have anyone removed from the council hall for speaking off-topic, until that day, during the 3-minute per person public comment period.

"I've never seen anybody other than Black folks put out of council meetings," Chambers, who is running for Congress in Saturday's election, told deGravelles.

McClanahan, who is now an NAACP national board member, and Collins offered similar testimony.

"I had never seen it happen before," said McClanahan, who noted he has attended hundreds of council meetings.

William Most and Brian Lahti, the attorneys for the three men, told deGravelles that Wilson, who is White, engaged in impermissible "viewpoint discrimination" in violation of their First Amendment rights. The lawyers also alleged that Wilson treated the Black speakers differently because of their race.

The lawsuit, which argues that speakers at other meetings have been afforded the opportunity to wander off-topic without reprisal, claims Wilson wanted to silence Black views.

But Celia Cangelosi, an attorney for Wilson and the city-parish, stated during Chambers' testimony that there was a "concerted effort" to disrupt the May 10, 2017, council meeting. She later told the judge that Wilson followed the council rules and the law.

The meeting occurred one week after federal prosecutors decided not to pursue a civil rights case against White city police officers involved in the fatal shooting of Sterling, a Black man, in 2016. Officers had responded to the Triple S store on North Foster Drive after receiving a complaint that an armed man was selling CDs in the parking lot. Sterling was shot dead during a scuffle with officers.

State law allows the removal of any people who "willfully disrupt a meeting to the extent that orderly conduct of the meeting is seriously compromised."

McClanahan was led out of the council chambers to public chants of "No justice, no peace!"

Chambers, who called Wilson a "coward" before being removed from the council meeting, was handcuffed by police officers and issued a summons for disturbing the peace and resisting an officer.

A "shut down the Metro Council" protest had been publicized ahead of the meeting.

The plaintiffs are not seeking damages other than court costs and attorney fees; rather, they want the court to rule that Wilson behaved illegally.

The judge said he will hear oral arguments from lawyers for both sides after they submit post-trial findings of fact and conclusions of law to him.