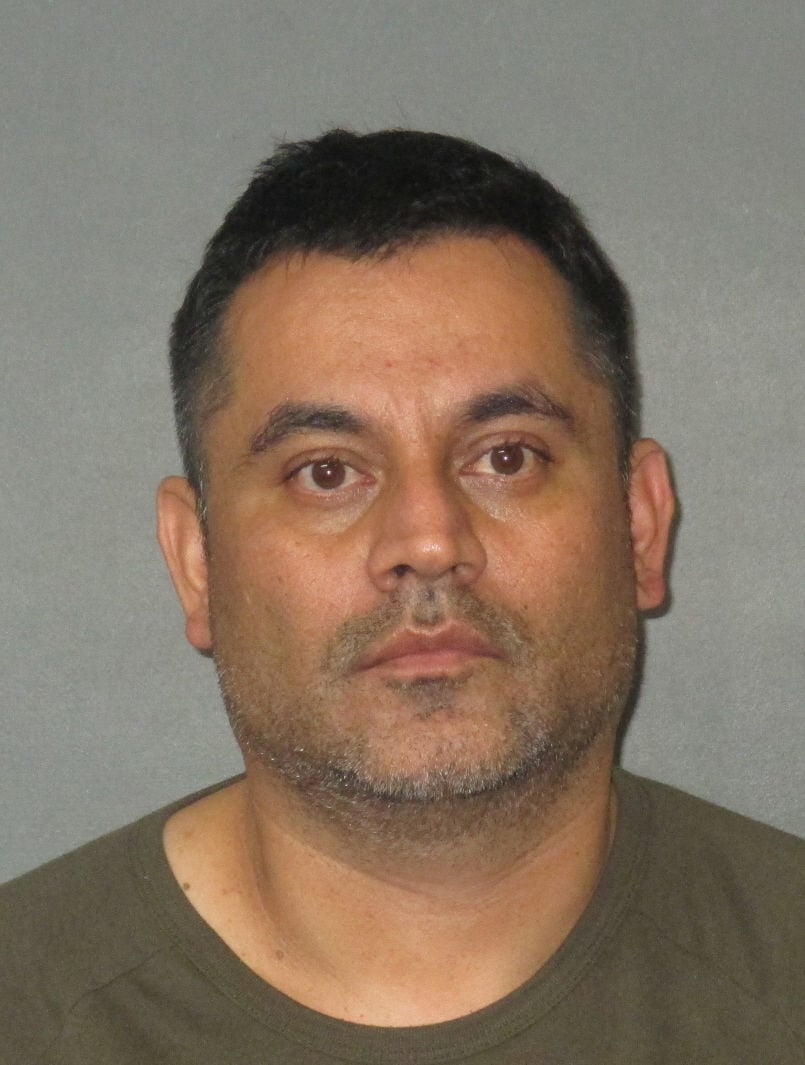 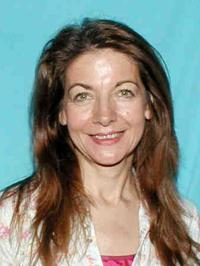 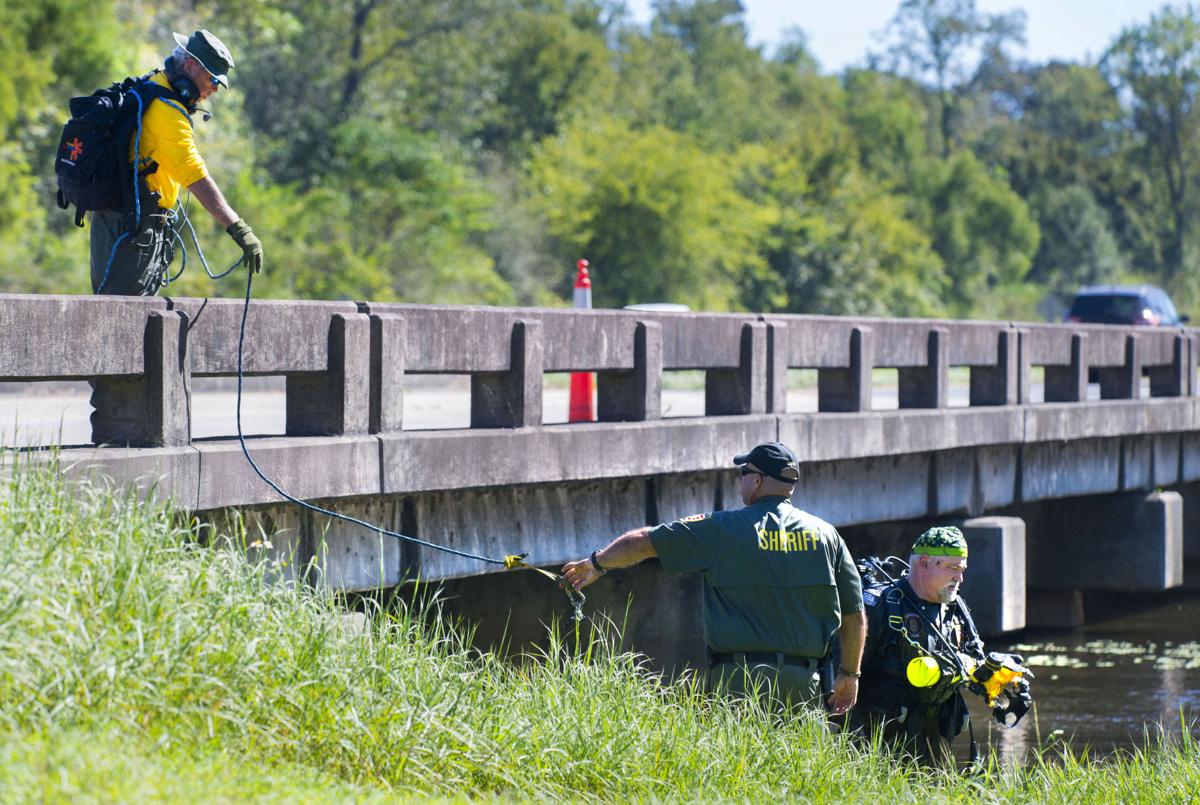 Members of the East Baton Rouge Sheriff's Office Marine Search and Rescue Dive Team work together to search a body of water under a small bridge on I-10 East, at the parish line for St. James and Ascension, as they continue their work searching for the remains of Sylviane Finck Lozada or any evidence relating to her murder, Thursday, Oct. 11, 2018. She disappeared in July 2011, and her husband Oscar Lozada, 43, confessed to the crime during questioning Oct. 5, after being brought back to Baton Rouge following his arrest in Mexico.

Members of the East Baton Rouge Sheriff's Office Marine Search and Rescue Dive Team work together to search a body of water under a small bridge on I-10 East, at the parish line for St. James and Ascension, as they continue their work searching for the remains of Sylviane Finck Lozada or any evidence relating to her murder, Thursday, Oct. 11, 2018. She disappeared in July 2011, and her husband Oscar Lozada, 43, confessed to the crime during questioning Oct. 5, after being brought back to Baton Rouge following his arrest in Mexico.

A state judge ruled Monday that statements Oscar Lozada gave to sheriff’s detectives about the 2011 death of his wife, a Brusly High School teacher whose body was dismembered and disposed of in buckets, can be used against him when he goes to trial on a second-degree murder charge.

Lozada, 43, is accused of killing foreign language teacher Sylviane Finck Lozada. Prosecutors haven't said how she died — her blood was found at the couple's home but her body has never been found — but they revealed in court documents last week what had happened to her remains.

East Baton Rouge Parish deputies arrested Lozada after his extradition from Mexico last year and a grand jury indicted him on a second-degree murder charge in January. In a video of an Oct. 5 interview, a portion of which was played in court Monday, Lozada initially tells Maj. Todd Morris he wanted a lawyer but later said he wished to cooperate.

Lozada, who is due back in court June 12, confessed to the killing, the East Baton Rouge Parish Sheriff's Office has said. He does not have a trial date. The confession portion of his interview with investigators was not played in court.

One of Lozada's attorneys, Quintillis Lawrence, argued at a hearing Monday that Morris should have stopped questioning Lozada when Lozada indicated he wanted a lawyer.

Lozada — before signing a form explaining his rights — stated to Morris on Oct. 5, “but I do want a lawyer,” according to an 8 ½-minute video of his initial interaction with the detective.

“So you and I can’t talk,” Morris told him in reply. The detective went on to say, “If you want to talk, you have the right to start talking or you don’t have to talk.”

Lozada then told Morris, “I do want to cooperate.”

Morris, who testified Monday that he had been in touch with Lozada over the years via telephone and email, said Lozada twice accompanied detectives — first the night of Oct. 5 and then on Oct. 8 — to several locations off Interstate 10.

“We were trying to get the location to recover Miss Finck’s remains,” the detective said.

“He wanted to do the interview more than he wanted an attorney there,” the judge said.

Prosecutor Dana Cummings argued Monday that Lozada’s confession was “not an arm-twisting” but was freely and voluntarily given. The prosecutor said for the first time in documents last Thursday that Sylviane Lozada's body had been dismembered and disposed of in buckets. Responding to a defense motion to suppress the confession, Cummings wrote that Lozada on Oct. 8 "willingly traveled with detectives in an attempt to guide them to the locations where he disposed of the buckets containing the dismembered body of Sylviane Finck."

The Sheriff's Office searched waterways along Interstate 10 between Baton Rouge and New Orleans last fall with the hope of finding her body, but did not report finding anything. Previous court filings had mentioned Lozada had purchased buckets and concrete around the time of her disappearance.

The woman's blood was discovered on the ceiling and walls of the garage at the family's Spring Lake Drive home in Baton Rouge after her July 2011 disappearance.

Her family last heard from her in July 2011, authorities have said.

On July 6, 2011, Oscar Lozada purchased two round trip tickets to Caracas, Venezuela, and also went to a home improvement store with the couple's then-4-year-old daughter and bought 15 bags of concrete mix and nine 5-gallon buckets with lids and luggage locks, his arrest warrant states. He returned to the store the following day and purchased six large plastic bins, the warrant says. The daughter now lives with her mother's family in Belgium, her mother's home country.

Lozada was arrested last fall in Mexico after more than seven years on the lam in his home country of Venezuela, which does not have an extradition agreement with the United States.

Sylviane Lozada’s death followed years of documented domestic abuse at the hands of her husband, authorities have said.