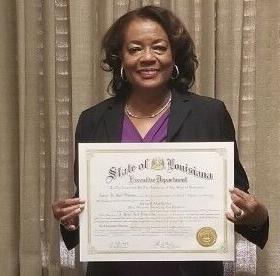 A hearing officer has rejected arguments that a Baton Rouge City Court judge is constitutionally barred from office because she reached the state's mandatory judicial retirement age before her election last year.

The Judiciary Commission, a panel of judges, lawyers and laypersons, could now hold its own hearing before forwarding any recommendation for discipline of Matthews to the Louisiana Supreme Court. The high court is the only body that can remove a sitting judge.

Matthews' attorney, Mary Olive Pierson, on Friday called the charges filed by the commission earlier this year "superfluous" and "unnecessary" and said "Baton Rouge should be proud to have Johnell Matthews as a city court judge."

State law bars people for running for a judgeship once they reach age 70, but sitting judges who turn 70 can serve out the rest of their term. Matthew was 69 when a primary election was scheduled to take place, but the vote was twice delayed because of the coronavirus pandemic — and she turned 70 in the interim.

A Baton Rouge lawyer who lost a recent City Court runoff by a 2-1 margin, then claimed in a lawsuit that the victor was too old to serve, was …

"It is clear that had the election proceeded as planned, Judge Matthews would have assumed judicial office before her seventieth birthday on June 7, 2020 without any issue," Gill-Jefferson, a Judiciary Commission hearing officer, wrote Thursday in her ruling. "But due to the pandemic, and through no fault of her own, she did not take office until September 9, 2020 — after her seventieth birthday."

Gill-Jefferson noted that, in lawsuits filed against Matthews before and after her election, "no decision ordering Judge Matthews to step down due to her age was ever issued."

"Had Judge Matthews been ordered by Judge Morvant, the First Circuit, or the Supreme Court to halt her candidacy before election or to step down from the bench following the election, and she had refused to do so, the allegations of judicial misconduct ... might have merit," Gill-Jefferson stated. "But this never happened, so there was (and is) no reason for Judge Mathews to step down."

State voters reaffirmed their support for the judicial age limit in 2014.

The Judiciary Commission's Office of Special Counsel alleged in February that Matthews' continued service on the City Court bench has "resulted in media reports concerning your actions and brought your court and the judiciary as a whole into disrepute."

Again, Gill-Jefferson disagreed with that contention.

"Apparently, the OSC feels that the media's mere reporting of Judge Matthews' defense of the lawsuits against her is sufficient to show that Judge Matthews has brought her court and the judiciary as a whole into disrepute," she wrote. "The Hearing Office, however, respectfully disagrees, and finds that absent more, the OSC has not provided clear and convincing evidence of any willful misconduct."

The Louisiana Supreme Court previously voted 5-2 not to suspend Matthews while the Judiciary Commission matter is pending.

"This decision also evaporates the myth that lawyers who are not sitting judges cannot run for judge after the age of 70," Pierson said Friday. "If a lawyer over 70 runs and gets elected, he/she can only serve one term which is the only reasonable and correct legal analysis of our constitution."

Morvant had noted the differences in the qualifications needed to run for judge and those needed to serve. It may be a loophole, he found, but it wasn't for him to fix.

Lantz Savage, a special counsel to the Judiciary Commission, had argued to Gill-Jefferson that by the time Matthews won election last summer to fill the City Court vacancy, it was already time for her to retire.

He said Matthews' argument that the constitutional age cap was meant only for retiring judges would lead to "patently absurd consequences." People of any age could run for judge and serve a single term, for instance, while sitting judges over 70 would have to retire.