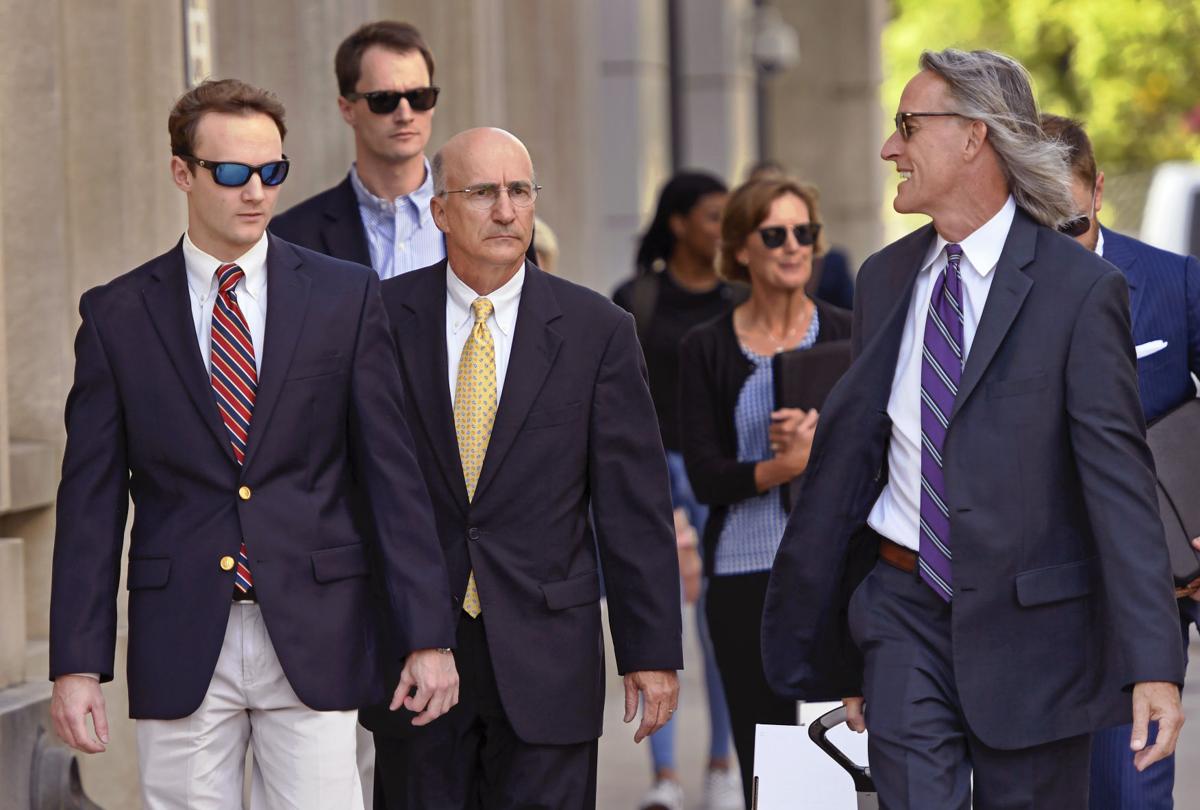 Matthew Naquin targeted Max Gruver the night the Phi Delta Theta pledge died of alcohol poisoning by peppering Gruver with questions during an initiation ritual and ordering him to chug hard liquor every time he gave a wrong answer, two LSU students who pledged the fraternity with Gruver in 2017 told a Baton Rouge jury Wednesday.

"I believe that Max would still be here today if Naquin had not been in that (fraternity) house that night, or if he (Naquin) had acted differently that night," Brayden Rabalais, who is from Seneca, South Carolina, and has been a student at LSU since the fall of 2017, testified at Naquin’s negligent homicide trial.

Christian Taulli, who said he considered Gruver his best friend at LSU, testified Naquin was over-aggressive at the Sept. 13, 2017, “Bible study” hazing ritual at which Gruver died.

Naquin, 21, of Fair Oaks Ranch, Texas, faces up to five years in prison if convicted in the death of Gruver, 18, of Roswell, Georgia. Naquin was a sophomore at LSU in the fall of 2017 and a member of Phi Delta Theta.

His trial began Monday and is expected to last into next week.

The jury heard Wednesday from seven LSU students who pledged Phi Delta Theta with Gruver and took part in the Bible study, during which pledges were asked questions about the fraternity and told to recite the Greek alphabet.

Mason Ray, of Slidell, said Naquin was the most severe hazer among the active Phi Delta Theta members that night, but Ray acknowledged telling the university’s dean of students that those members are good people and that no one was responsible for Gruver’s death.

“Yes, I gave that opinion,” Ray said Wednesday while being questioned by Naquin’s lead attorney, John McLindon. “I didn’t think they wanted that to happen.”

Justin Keller, also of Slidell, said Naquin shoved him against a wall at one point during the initiation ritual, causing Keller to hit his chin on the wall.

“Compared to the other guys, he was being a lot more aggressive, yelling,” Keller testified.

Tyler Falk, of Kenner, said he felt that Naquin was “the main person in charge” of the Bible study hazing.

Falk recalled Naquin telling pledges that night, “If somebody asks you what happened here, what do you say? Absolutely nothing.”

Nick Pastorello, of Mandeville, who said Gruver was a “happy-go-lucky kid” who always had a smile on his face, testified Naquin appeared to have been drinking when he came downstairs that night to start the Bible study initiation. Pastorello described Naquin as belligerent.

“Matthew Naquin was clearly the one leading it, without a doubt,” added Benjamin Ainsworth, also of Mandeville. “He was the one running around yelling at everyone, jumping up and down, pushing people.”

“It was a lot. It was more than five” times, Ainsworth said. “I don’t think he (Naquin) really cared.”

Rabalais testified that Naquin told him during a car ride that he didn't like Gruver and wanted him cut from the fraternity because he was always late to pledge activities.

At the ill-fated September 2017 hazing event, Rabalais said, an angry Naquin told pledges he hoped they were prepared to be quizzed on the fraternity manual "because I'm already f***** up."

Rabalais said he recalled Naquin and fellow Phi Delta Theta member Sean-Paul Gott, of Lafayette, holding bottles of 190-proof alcohol in their hands when he arrived for the Bible study event.

Rabalais said Gruver failed to answer many questions posed to him by Naquin, and could not recite the Greek alphabet.

"Naquin was continually asking him questions over and over," Rabalais said, adding that Naquin ordered Gruver to chug alcohol "at least five to six times if not more."

"I believe Max was targeted by Naquin because he was asked to drink longer than the other pledges," Rabalais added.

Gott, 22, pleaded no contest last fall to misdemeanor hazing in the case and testified Wednesday that he sent fraternity members and pledges a social media message announcing the Bible study. At the conclusion of the event, Gott said, a very intoxicated Gruver passed him and said several times, “If I could only remember Epsilon” — a reference to the letter of the Greek alphabet that Gruver kept forgetting that night.

Gott, who has not been sentenced, said he would have been more concerned about Gruver, but the pledge was able to walk down the stairs on his own.

The next morning, Gruver was found unresponsive on a couch in the fraternity house. Christian Taulli said Gruver looked pale, his lips were purple and his hands were cold and clammy. Taulli said he helped carry Gruver to the car in which he was taken to a hospital. He was pronounced dead there.

Ryan Isto, 20, of Butte, Montana, who was Naquin's roommate at LSU, also pleaded no contest to hazing last year and testified Tuesday. He will be sentenced later.

Gruver's blood-alcohol level was 0.495 percent, which is more than six times the legal limit to drive in Louisiana, an autopsy showed. THC, the chemical found in marijuana, also was detected in Gruver's system.

Taulli told investigators that Gruver was high when he showed up for the Bible study event.

Phi Delta Theta has been banned from LSU's campus until at least 2033 as a result of the probe into Gruver’s death.