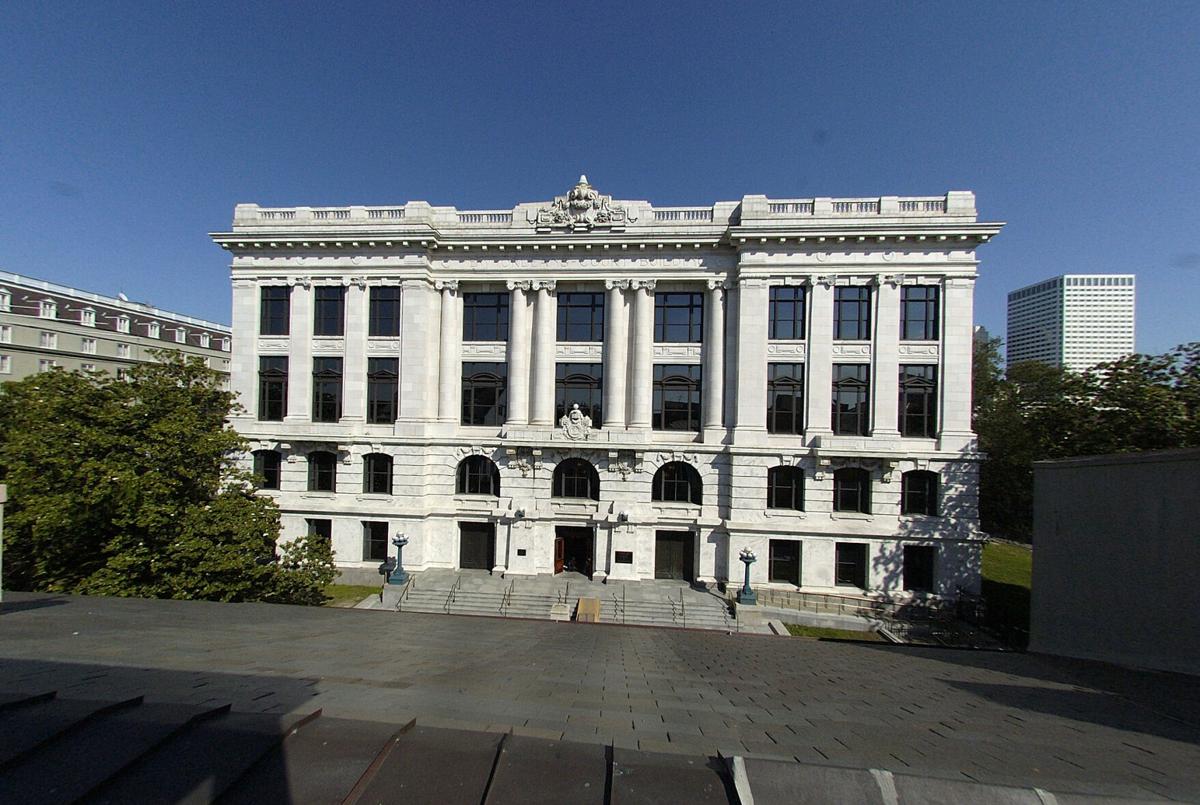 The Louisiana Supreme Court, captured in a 2004 photo, ruled January 7, 2022 that hospitals can mandate vaccinations for employees.

The Edward Douglass White statue pedestal still remains after the statue was relocated to the inside of the Louisiana Supreme Court building in the French Quarter in New Orleans, Wednesday, Dec. 23, 2020. E.D. White was a known white supremacist and the first U.S. Supreme Court Justice who came from Louisiana. (Photo by Sophia Germer, NOLA.com, The Times-Picayune | The New Orleans Advocate)

The Louisiana Supreme Court, captured in a 2004 photo, ruled January 7, 2022 that hospitals can mandate vaccinations for employees.

The Edward Douglass White statue pedestal still remains after the statue was relocated to the inside of the Louisiana Supreme Court building in the French Quarter in New Orleans, Wednesday, Dec. 23, 2020. E.D. White was a known white supremacist and the first U.S. Supreme Court Justice who came from Louisiana. (Photo by Sophia Germer, NOLA.com, The Times-Picayune | The New Orleans Advocate)

The Louisiana Supreme Court ruled Friday that hospitals can mandate coronavirus vaccines for employees, dealing a blow to hospital staffers who challenged those requirements and opening the door for similar edicts by private employers across the state.

State laws, in fact, allow private employers to fire workers who refuse to get vaccinated, justices ruled. The court also ruled that hospitals and other private employers are not bound by a constitutional provision meant to protect personal privacy.

"This court finds (the) Employer is entitled to terminate Employees for failure to comply with the vaccine mandate," stated the unanimous court decision, written by Chief Justice John Weimer.

The ruling comes as the coronavirus is again surging locally and across the country, and as federal vaccine-or-test mandates for large employers and certain hospitals are being taken up by the U.S. Supreme Court.

Louisiana has repeatedly broken its record this week for numbers of coronavirus infections reported in a single day, and has tallied 95,905 new cases since the highly contagious omicron variant was identified in the state, data show.

When announcing its mandate for employees last year, Ochsner cited a surge in hospitalizations and deaths from the earlier delta variant of the disease, and said it was trying to protect staffers and patients.

But the roughly 75 staffers who filed suit after that announcement argued that the state's medical consent law, which allows adults to refuse medical treatment, meant that their employers could not mandate they get vaccinated.

The workers, who took aim at Ochsner LSU Health Shreveport and Ochsner-Lafayette General, also invoked their constitutional right to privacy, which they likened to the right "to be free from discrimination based on race, sex, and religious beliefs in the workforce."

They will also review a separate vaccine mandate for most health care workers.

But the Supreme Court held that the medical consent law only applies to the relationship between a health care provider and a patient — not between a private employer and employee.

The court also agreed that the constitutional protections employees cited only potentially apply to public institutions, not private ones, such as Ochsner.

Ochsner President and Chief Executive Officer Warner Thomas said in a statement after the ruling that they were pleased with the decision.

"Ochsner Health remains committed to protecting the health and safety of our patients, team members and everyone across the communities we serve, and this decision supports our right to enact policies that protect patients and staff at our facilities across Louisiana," Thomas said.

An Ochsner spokesperson did not respond to questions Friday about when the vaccine requirement will go back into effect, after Ochsner paused its implementation while the courts took up the issue. Similarly, the Franciscan Missionaries of Our Lady Health System also adopted a vaccine mandate for workers last year that they put on hold during the litigation. A spokesperson for Our Lady of the Lake Regional Medical Center did not respond to messages Friday about how the Ochsner ruling will affect their vaccine mandate.

Jimmy Faircloth, the attorney who represented the health care workers refusing the vaccine, said in a statement that he and his clients will push for the Louisiana Legislature to change state law. Faircloth, who was once executive counsel to former Gov. Bobby Jindal, is well-known at the state Capitol and said there's a strong appetite for an "Individual Medical Rights Act" in the future.

"Some fights are worth it," Faircloth said. "Though our clients are disappointed in the decision, they have always understood that the issue was bound for the legislature."

He said that the state court "has granted authority for private employers to place medical treatment restrictions on employees for any reason, without explanation or rationale."

"This is uncharted territory for personal autonomy," he added.

The ruling came on the same day that the U.S. Supreme Court is hearing oral arguments on vaccine mandates at the federal level. Those cases involve whether to allow U.S. President Joe Biden to implement a requirement that large employers either force employees to receive vaccines or submit to COVID testing. The U.S. Supreme Court is also expected to rule on a separate vaccinate mandate for most health care workers.

Public health officials across the state and the nation have urged as many people to get vaccinated as possible, saying it's the best protection against the coronavirus and significantly reduces the chance of being hospitalized or dying from the virus.