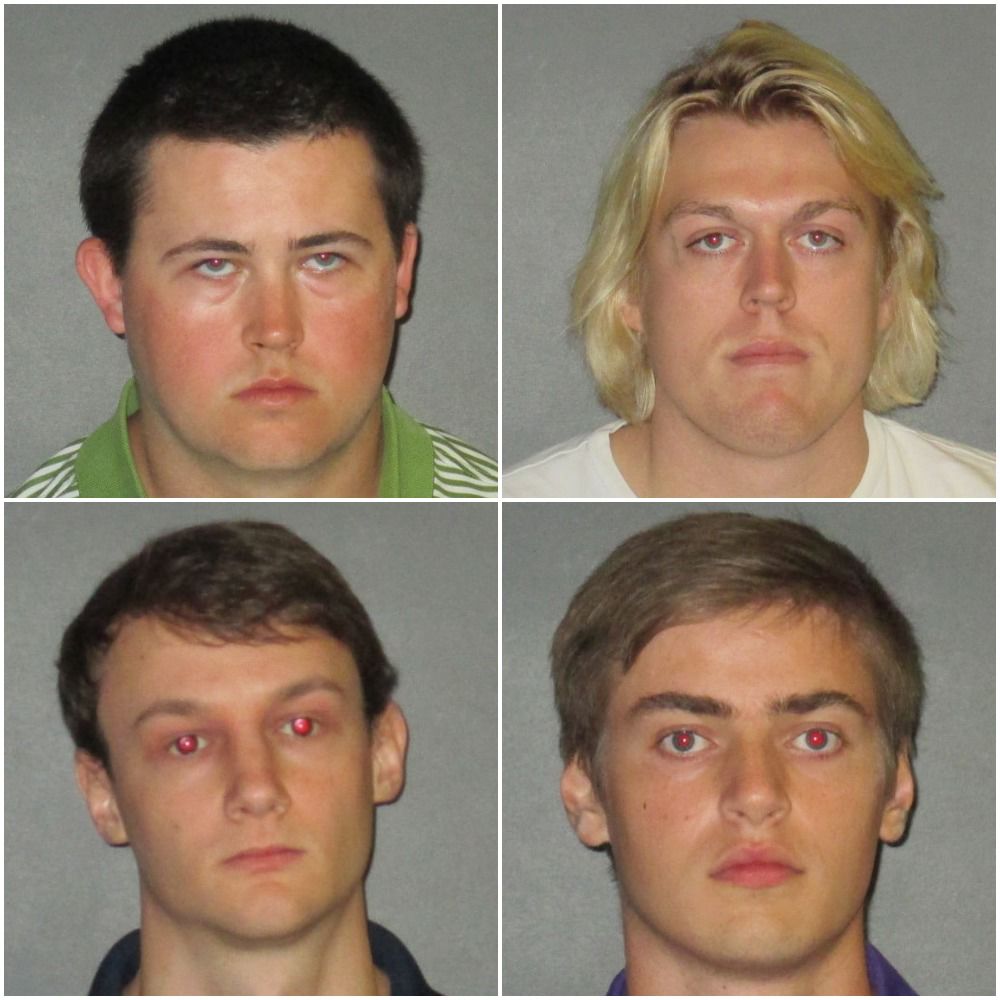 Six months after his death rocked the LSU campus and spurred some state lawmakers to action, an East Baton Rouge Parish grand jury that investigated the alleged hazing of 18-year-old fraternity pledge Maxwell Gruver on Thursday indicted a former student with negligent homicide and three others with hazing.

Matthew Alexander Naquin, 20, is accused of negligent homicide, a felony that carries up to five years in prison, while Sean-Paul Gott, 21, Ryan Matthew Isto, 19, and Patrick Andrew Forde, 21, were charged on a misdemeanor hazing count, punishable by up to 30 days in jail.

Police had said Gruver, of Roswell, Georgia, was targeted by senior members of Phi Delta Theta in a hazing ritual they dubbed "Bible study" that required pledges to chug 190-proof liquor when they incorrectly answered questions about the fraternity.

Max Gruver's parents, Rae Ann and Stephen Gruver, traveled to Baton Rouge to attend the grand jury announcement — the first time they had been back since their son died Sept. 14.

"To me, the charges just don't fit the crime," Stephen Gruver said. "The punishment is practically nothing and our whole family has changed for the rest of our lives. … That's not a deterrent. The law needs to be substantive enough to make somebody think twice."

He said the family is advocating a change to state law that would make hazing a felony. They're also reaching out to other families affected by hazing and looking to spread the word about what happened to their son in hopes of "changing the culture" that led to his death.

East Baton Rouge District Attorney Hillar Moore III, whose prosecutors presented the case to the grand jury, agreed with the family that the hazing law needs to be strengthened.

"Our hazing statute is inadequate to cover the death of their son," Moore said. "It's not an appropriate penalty."

A lawyer representing Naquin, of Fair Oaks Ranch, Texas, said his client is innocent. Police reports said witnesses accused Naquin of being the most aggressive hazer during the party last September.

“We are prepared to go to trial and show that Matthew did not commit negligent homicide,” said John McLindon, his attorney.

The 11 grand jurors pretermitted — meaning they heard evidence but were unable to reach a consensus — on charges involving the three men charged with hazing, as well as others arrested in October by LSU Police in the incident.

A lawyer representing Isto, of Canada, said he and his client were disappointed, but not surprised, by the hazing indictment.

“The hazing statute is vague and confusing, and the grand jury, unfortunately, doesn't get to hear all the facts as would a jury or judge at trial,” Michael Fiser wrote in an email. “We never felt negligent homicide was remotely applicable to Isto under all the facts, and we look forward to moving ahead in this process to find closure for everyone involved in this tragic incident.”

Kris Perret, who represents Patrick Forde, of Westwood, Massachusetts, said his client was not an LSU student and was no longer an active member of the fraternity at the time of Gruver’s death.

“We’ll discuss it with the District Attorney’s Office at the appropriate time,” he said of the hazing indictment against Forde.

Gott, of Lafayette, could not be reached for comment. Prosecutors said they have had no contact with an attorney for him.

The grand jury, which began its work in December, issued a no true bill for Nicholas Michael Taulli, 20, of Cypress, Texas, clearing him on a hazing charge. The grand jury did not consider charges against one man who was arrested last year: Sean Andrew Pennison, 21, of Mandeville. His attorney said prosecutors informed him Thursday that they would not seek to prosecute Pennison.

The jurors also pretermitted after considering whether to render hazing charges against Hudson Brandt Kirkpatrick, 19, Zachary Tower Hall, 21, and Elliott Eaton, 20. They pretermitted as well on obstruction of justice and hazing charges considered against Zachary Antonio Castillo, 19.

Prosecutors also asked the grand jury to consider a misdemeanor charge of hazing against the LSU chapter of Phi Delta Theta, but the jurors pretermitted.

An autopsy revealed Gruver's blood-alcohol content was 0.495 percent — more than six times the legal limit to drive. The parish coroner said his Sept. 14 death was an accident but could be attributed to alcohol poisoning and aspiration, meaning he suffocated on his own vomit.

Gruver’s parents have said they don't believe their son would have voluntarily consumed that amount of alcohol.

LSU President F. King Alexander said in a written statement that the grand jury’s decision “furthers the fact that behaviors that threaten the safety of our students will not be tolerated.”

“Hazing is dangerous and unacceptable. We are taking necessary steps to change the culture on campus related to hazing and are currently in the implementation phase of our Task Force on Greek Life’s recommendations,” he said.

In a recent policy change that Alexander said will be enforced with no exceptions, LSU students caught hazing will be expelled and the involved fraternities or other student organizations will be kicked off campus.

Aidan Reynolds, who represents Taulli, said the grand jury made the right call in clearing his client, who merely shuttled pledges to and from the fraternity house that night.

“He is a great kid. I had no great concerns about him being formally charged with anything. He had no involvement whatsoever,” Reynolds said.

Franz Borghardt, the attorney for Sean Pennison, said his client is relieved that prosecutors decided not to prosecute him. “Ultimately we trusted the District Attorney’s Office and the system and it worked,” he said.

An attorney for Castillo, of Terrytown, said his client is thankful for the consideration and effort that the District Attorney’s Office and grand jury put into the matter.

“I agree with the grand jurors’ decision not to charge my client,” Brian Capitelli said in an email. “Zac and his family will continue to keep the Gruver family in their thoughts and prayers.”

Rodney Messina, who represents Eaton, of New Orleans, said he was pleased with the grand jury’s decision to pretermit on the hazing count they considered.

“We don’t know what the evidence is out there,” he said. “Unless there’s some new evidence coming back, we’ll just wait and see.”

David Bourland, who represents Zachary Hall, of Charlotte, North Carolina, said he respects the grand jury’s decision to pretermit on the hazing count against him.

“Mr. Hall was always innocent. The indicting of (him) … would have made this more tragic,” he said. “Zachary was not involved and did not participate in any form or fashion. His heart goes out to Maxwell.”

Mary Olive Pierson, one of the lawyers for Kirkpatrick, of Baton Rouge, said her client cooperated with authorities and was not involved in Gruver’s death.

“We’re glad to get this behind him so he can continue with his studies,” she said.

Naquin, Gott and Isto are no longer students at LSU.

Proposed bills calling for stiffer hazing penalties and protections for students who report dangerous behavior such as hazing are expected to be taken up during the three-month regular legislative session that began Monday.

After Gruver died, Phi Delta Theta's national headquarters pulled the fraternity from LSU's campus. Less than a year before his death, the fraternity had been temporarily suspended for complaints about hazing and drinking.

From now on, LSU students who are caught hazing will be expelled and the involved fraternities or other student organizations will be kicked o…