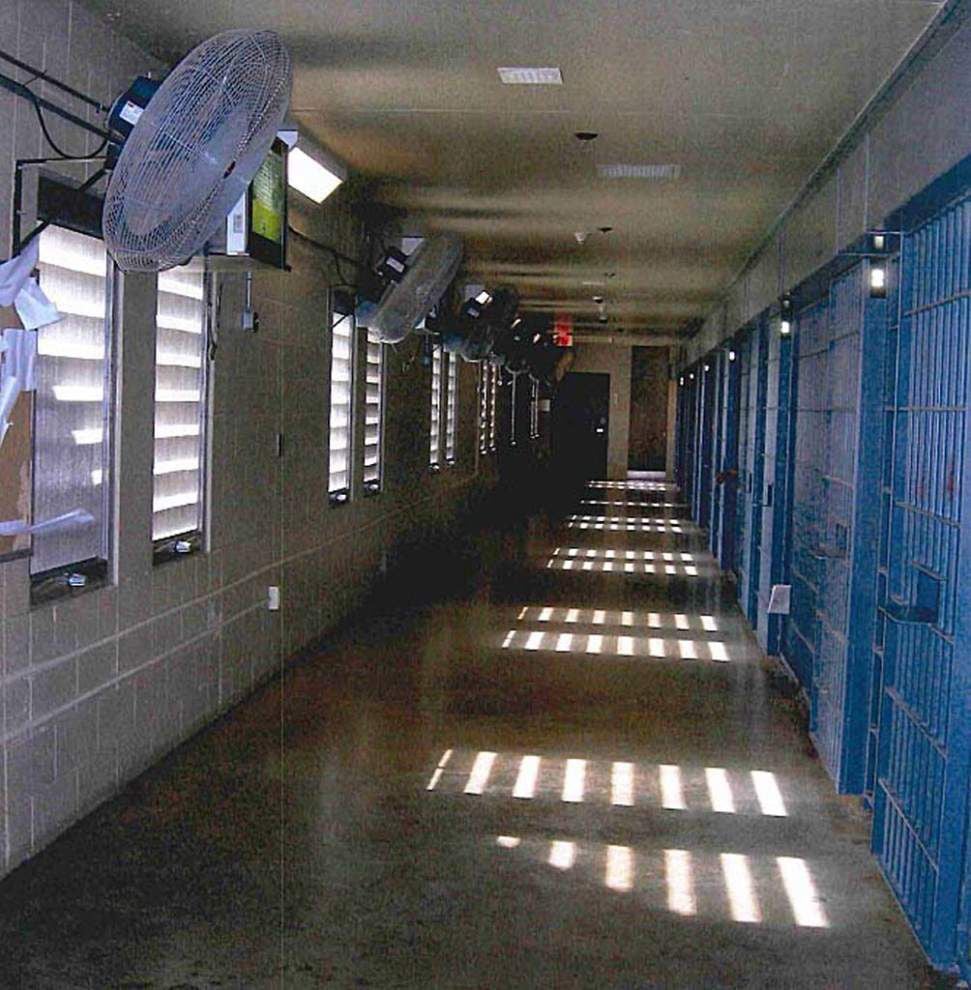 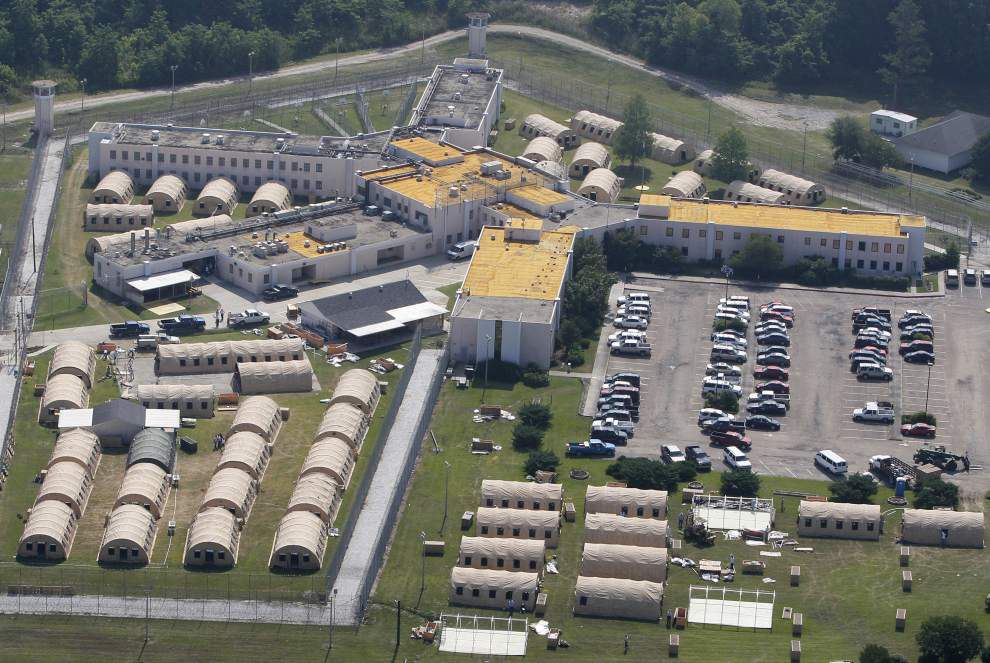 FILE - In this May 9, 2011 file photo, the Louisiana State Penitentiary at Angola is seen in West Feliciana Parish, La. U.S. District Judge Brian Jackson expressed frustration as he questioned why prison officials won't spend roughly $1 million to install air conditioning on death row, since the state has already spent much more to fight this in court. (AP Photo/Patrick Semansky, File)

FILE - In this May 9, 2011 file photo, the Louisiana State Penitentiary at Angola is seen in West Feliciana Parish, La. U.S. District Judge Brian Jackson expressed frustration as he questioned why prison officials won't spend roughly $1 million to install air conditioning on death row, since the state has already spent much more to fight this in court. (AP Photo/Patrick Semansky, File)

Three ailing Louisiana death row inmates will still have to be protected from excessive heat during the sweltering summer months, but a federal appeals court has given state corrections officials more latitude to decide how to keep them cool.

A three-judge panel of the 5th U.S. Circuit Court of Appeals in New Orleans said the state does not have to prevent heat indexes at the Angola prison from topping 88 degrees as a Baton Rouge federal judge previously ordered.

The appellate court ruled that Chief U.S. District Judge Brian Jackson erred by setting the 88-degree threshold and sent the civil rights case, filed by the three prisoners in 2013, back to him for further review.

The panel left open the possibility that Jackson may require what it called "temperature triggers" that would initiate the use of specific heat-relief measures. But where Jackson "went astray," the appellate court judges said, was when he effectively required a "temperature ceiling" that could not be breached.

"Although well-intentioned, the district court ... both considered and accepted the need for a maximum heat index," Circuit Judge Jerry Smith wrote Wednesday for the panel, noting that a previous 5th Circuit panel "plainly foreclosed any consideration of a maximum heat index."

In his response to the appeals court ruling, Louisiana Attorney General Jeff Landry said the Constitution "does not require prisons to be comfortable; it requires them to be humane."

The state has argued it should have to provide only cold showers, an individual fan and unlimited access to ice and water to the three inmates.

The 5th Circuit has made it clear over the past few years and again on Wednesday that condemned killers Elzie Ball, Nathaniel Code and James Magee are not entitled to air conditioning on Angola's death row. The inmates' attorneys have argued that air conditioning is the only way to adequately lower heat indexes on death row, and at the same time reduce the prisoners' risks of heat-related illness or even death.

With south Louisiana's summer heat and humidity kicking into high gear, the legal battle rages on over how to best protect three ailing condem…

Ball was condemned to die for fatally shooting beer deliveryman Ben Scorsone during a 1996 armed robbery of a Gretna lounge. Magee received the death penalty for the 2007 shotgun killing of his estranged wife, Adrienne Magee, and their 5-year-old son, Zach, in a subdivision near Mandeville. Code is on death row for the slaying of four people at a house in Shreveport in 1985.

Jackson and the 5th Circuit both have found that subjecting the ailing Angola death row inmates to excessive heat constitutes cruel and unusual punishment, and that some remedies are necessary to protect their health and safety.

Circuit Judge Stephen Higginson agreed with Smith and fellow 5th Circuit Judge Rhesa Barksdale that ordering the state to maintain the heat index below 88 degrees was wrong. But in a partial dissent, he said that to forbid Jackson from considering a maximum safe heat index "is to require that court to remedy the constitutional violation that we have found exists … without considering its cause."

"But, in a facility where the heat index frequently exceeds 100 degrees and has risen as high as 110.3 degrees, requiring the state to lower the heat indices to which these medically compromised plaintiffs are exposed is not the same as mandating that the heat index remain below 88 degrees," Higginson wrote.

The heat index is a measure of temperature and humidity.

The state is currently providing the three inmates with cold showers, individual fans, unlimited access to ice and water, and "IcyBreeze" units. IcyBreeze is a brand name, but in court documents the modified ice chests also have been referred to as "Cajun coolers," which are equipped with fans and ducting to blow cool air.

The state has been using the IcyBreeze units under protest, saying they are essentially air conditioning, but the 5th Circuit panel disagreed with that characterization in its Wednesday decision.

"As the district court rightly explained, the IcyBreeze units are basically ice chests with fans attached," Smith wrote, adding that they also are inexpensive, costing about $500 apiece.

The inmates' civil rights case has bounced back and forth between Baton Rouge federal court and the New Orleans-based appellate court.

Jackson's 2013 order mandating the state to keep heat indexes from topping 88 degrees was struck down by the 5th Circuit because it effectively required the state to install air conditioning throughout the death row housing, the appeals court said.

The state's second court-mandated plan provided the three inmates with daily, 15-minute cold showers; ice containers regularly replenished from newly purchased ice machines; and a personal fan. The inmates' objected to that plan, and Jackson concluded it was inadequate because it exposed the prisoners to heat indexes above 88 degrees. The judge also found that the plan did not reduce the substantial risk of serious harm to the inmates because they continued to experience heat-related symptoms during the plan's implementation.

The state, in connection with settlement discussions, then implemented under protest several experimental relief measures. These included relocating the three men to another tier close to the air-conditioned guards' pod, installing an air vent in that pod to divert cool air to the inmates' cells, setting up a plastic curtain around their cells to trap the cool air, providing each man with an IcyBreeze unit and regularly replenishing the units with ice. Those measures would only kick in when the heat index topped 88 degrees.

The state appealed Jackson's imposition of that third plan to the 5th Circuit, which led to Wednesday's ruling.

In sending the case back to Jackson in that ruling, the appeals court said the judge "cannot decree whether any given plan is necessary to lower the heat index to below a maximum, nor can it require the state to provide an undetermined number of IcyBreeze units or other measures to keep the heat index below a certain point."

The panel, however, said it "may well be that parts of the Third Plan are still necessary to redress the constitutional violation: i.e., `housing these prisoners in very hot cells without sufficient access to heat-relief measures.'"

The five members of the Bamburg family sat on black plastic chairs, waiting patiently for the hearing to begin on Thursday in Baton Rouge.