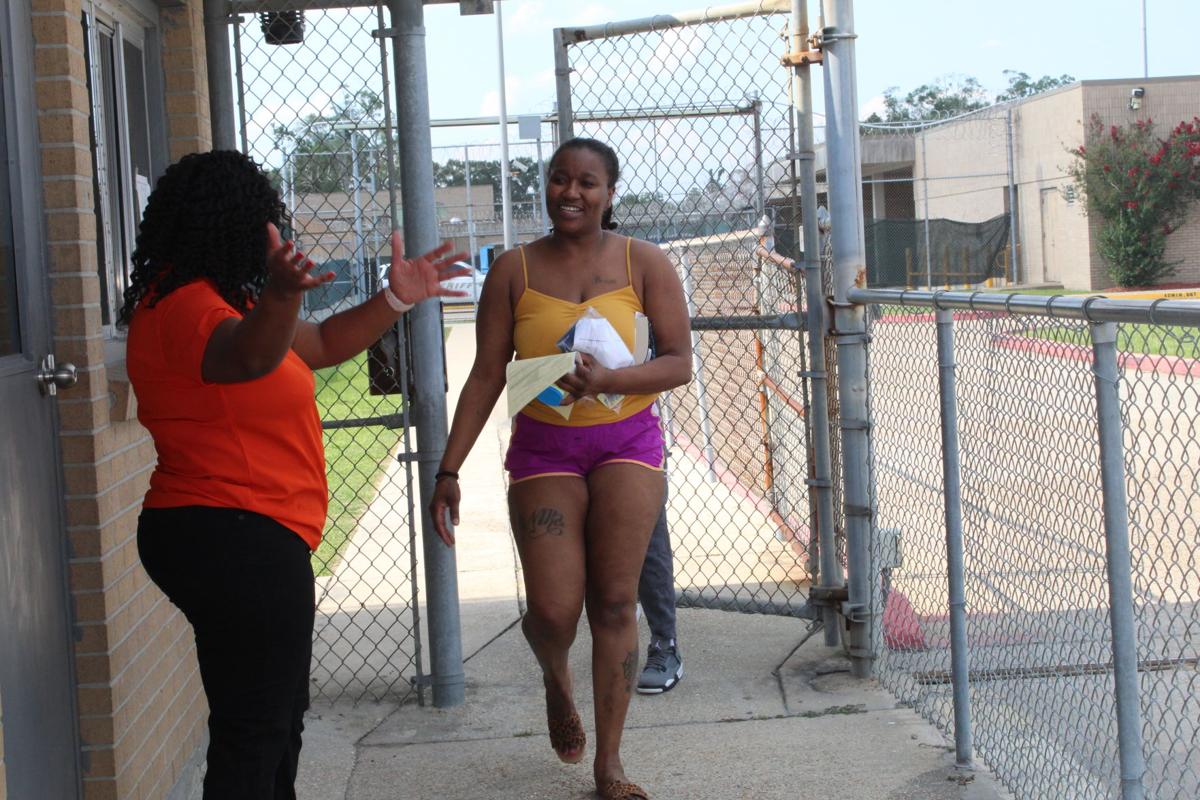 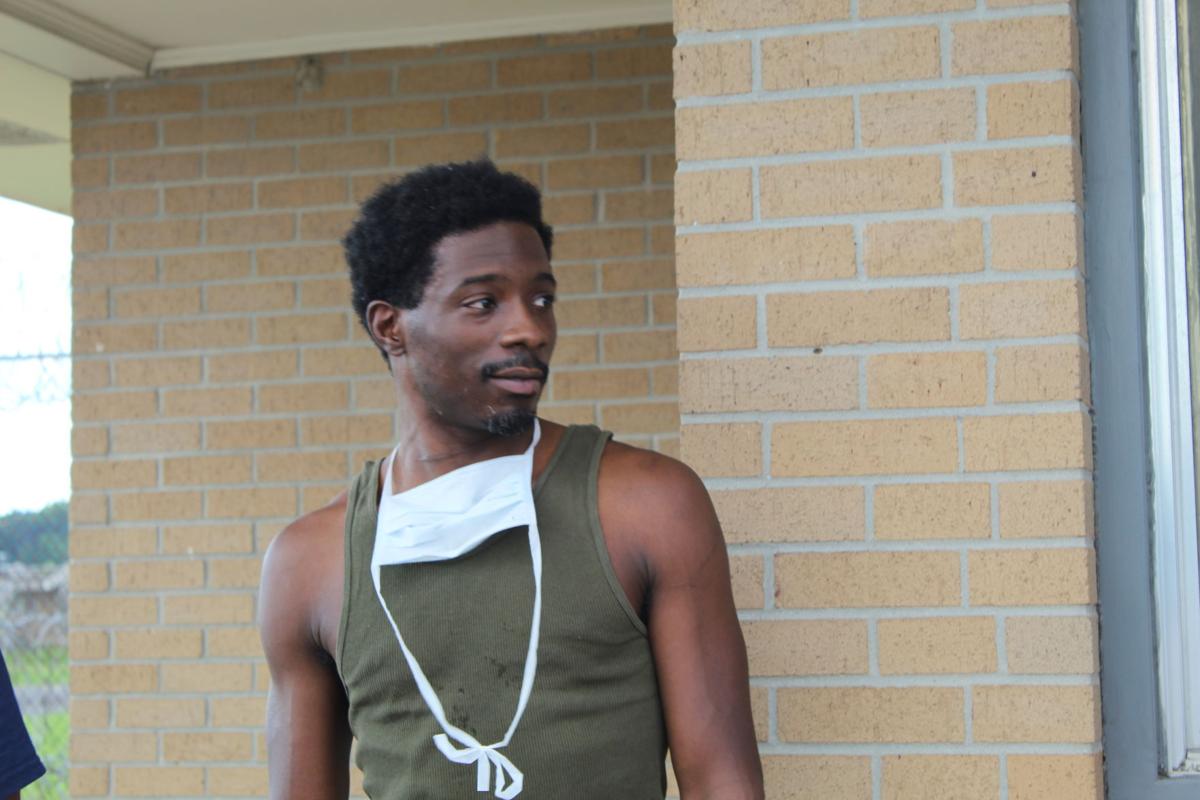 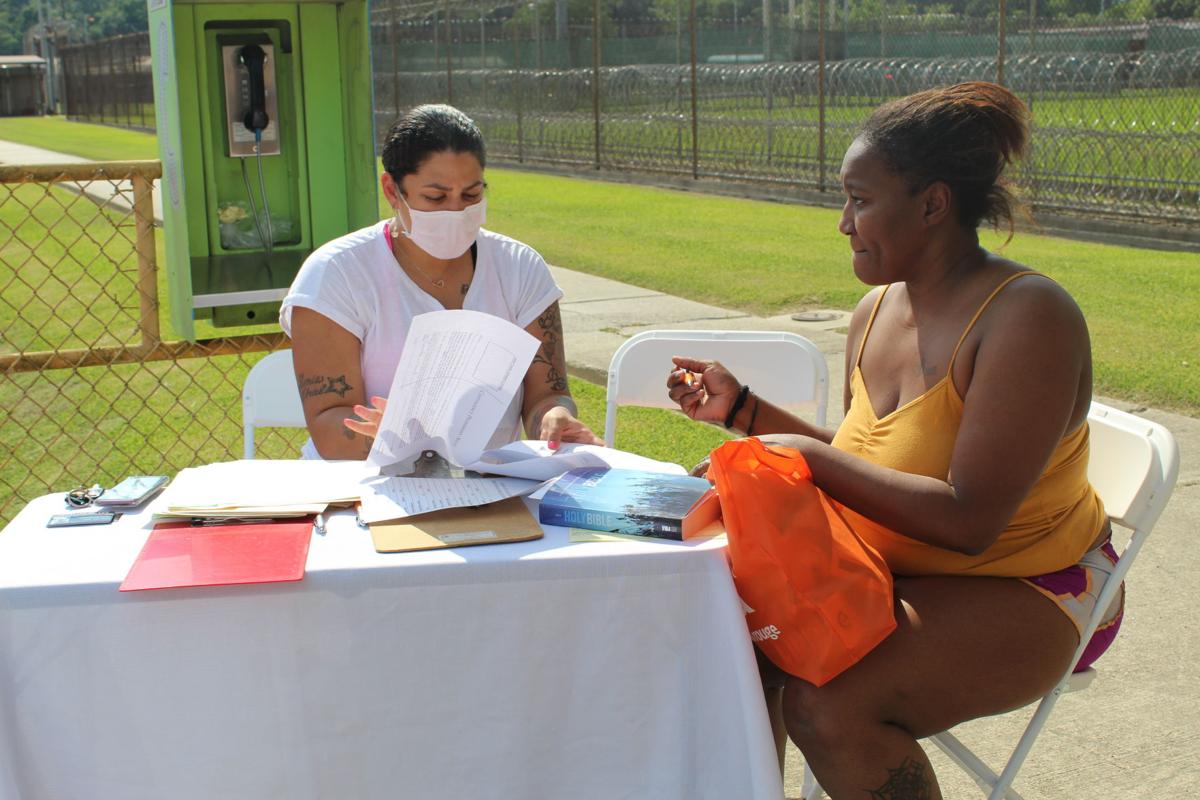 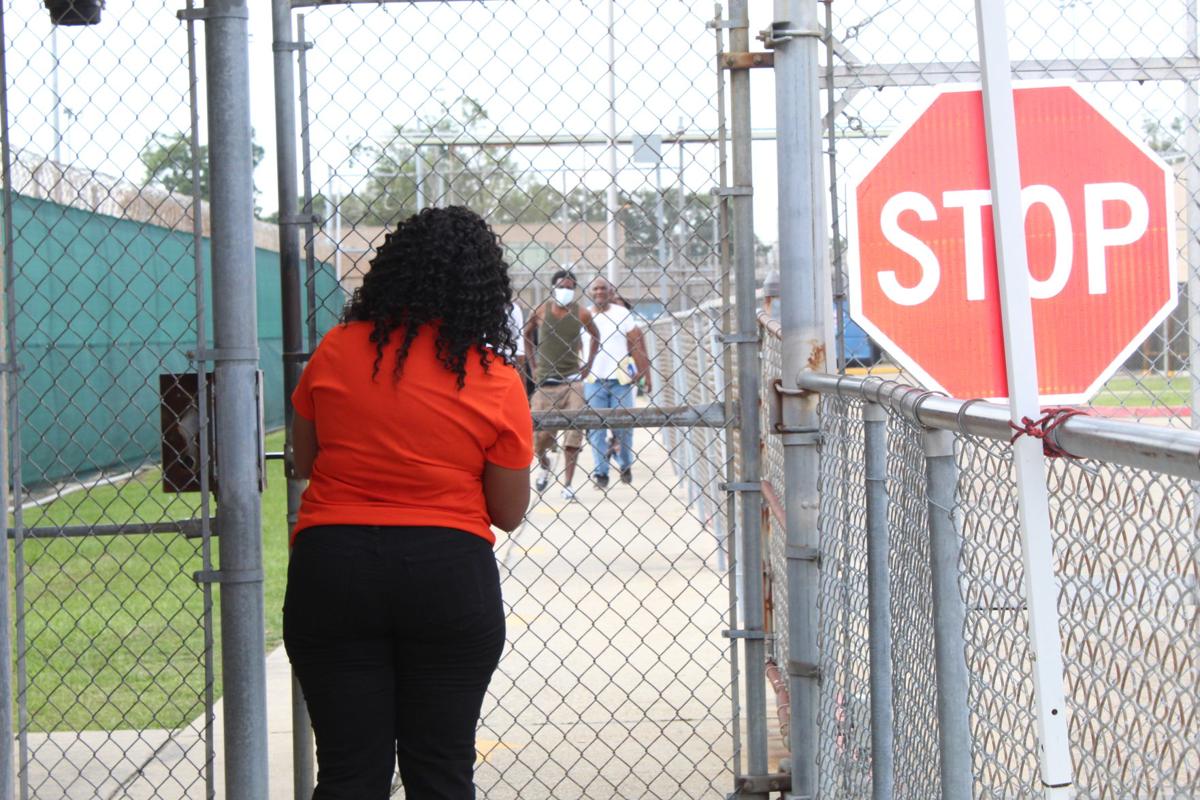 Dianna Payton, CEO of the YWCA of Greater Baton Rouge, waits for the crowd of defendants to exit East Baton Rouge Parish Prison. 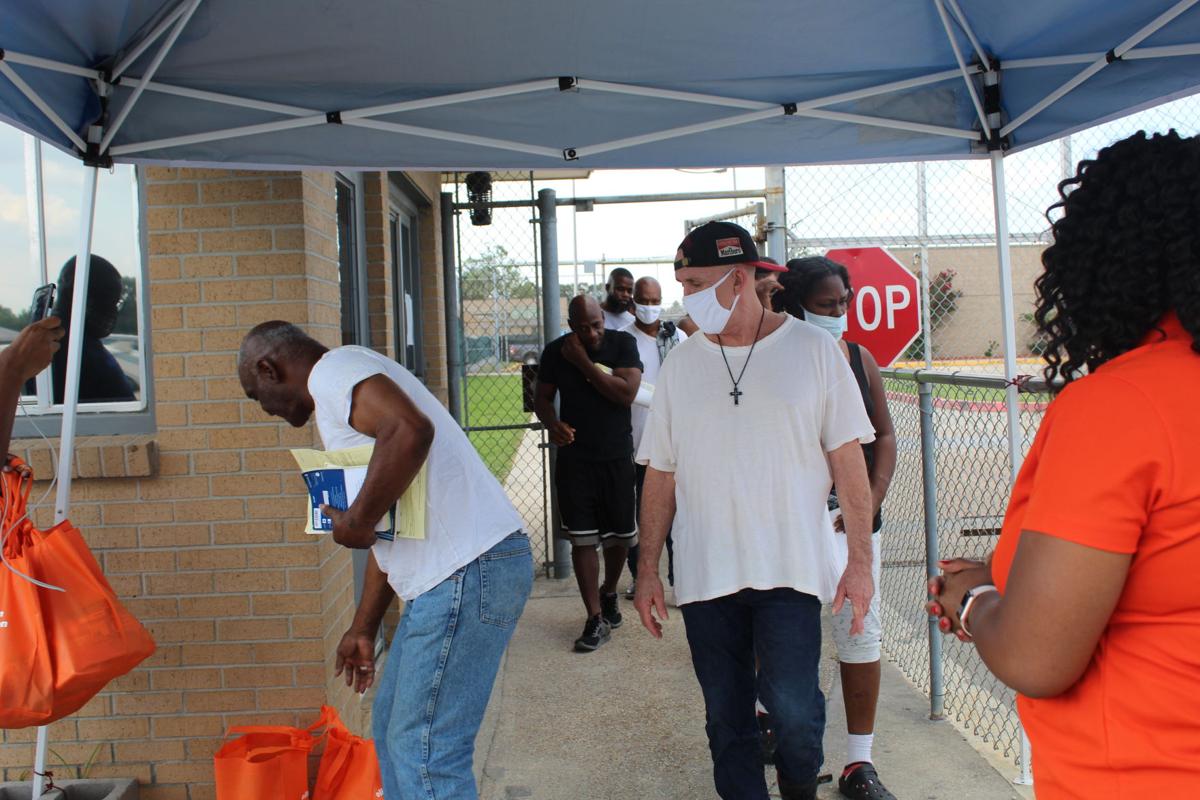 Defendants exit the jail and volunteers with YWCA hand out bags of food and hygiene products. 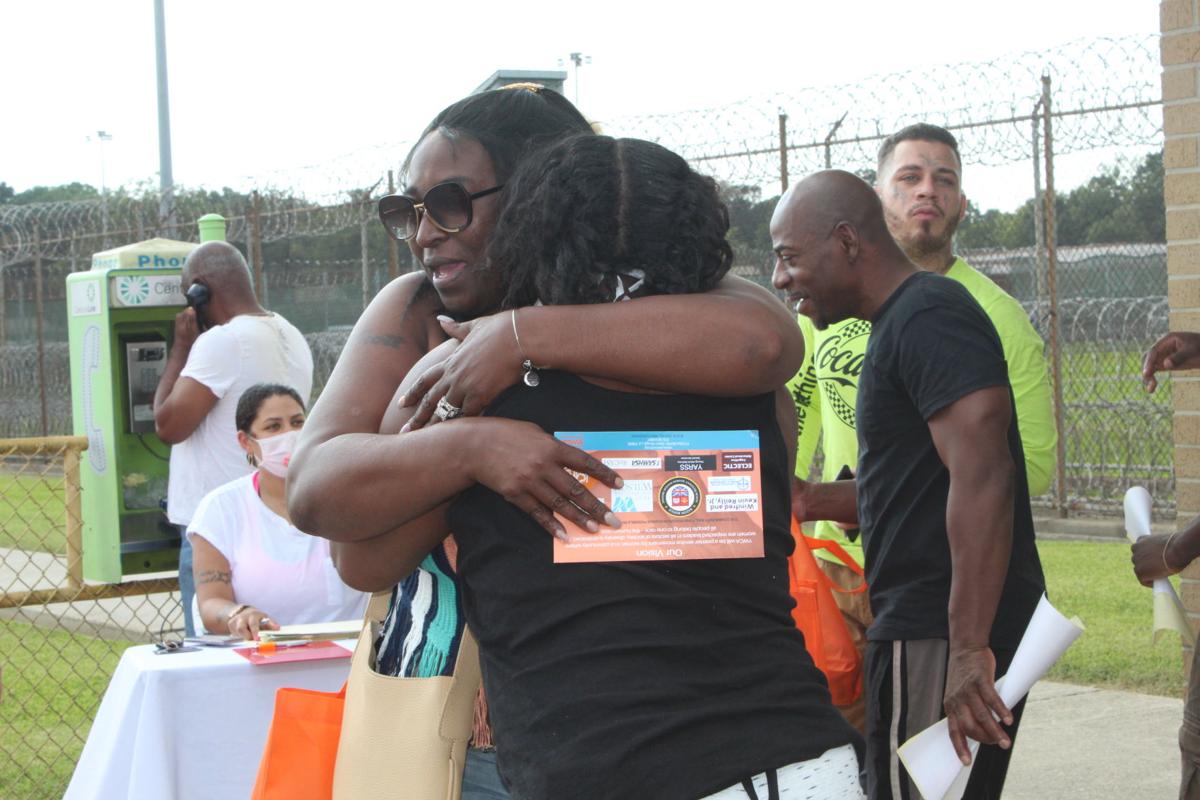 A woman and her sister embrace after her release.

Dianna Payton, CEO of the YWCA of Greater Baton Rouge, waits for the crowd of defendants to exit East Baton Rouge Parish Prison.

Defendants exit the jail and volunteers with YWCA hand out bags of food and hygiene products.

A woman and her sister embrace after her release.

When Kenneth Parker was arrested in late May on drug and theft-related counts, his biggest worry was that he would miss Father's Day with his six children.

His bond had been set at $6,500, according to booking documents — an amount he could not easily pay.

"That was like the biggest stress," Parker said. "It wasn't sitting well with me because my kids are small. That was the biggest thing I was thinking of — like letting my kids down."

To his relief, Parker — along with around 15 other men and women — were released from East Baton Rouge Parish Prison after bonding out through a community bail fund on Friday afternoon. Organized by YWCA of Greater Baton Rouge, the bailout was scheduled in honor of Juneteenth, a holiday that celebrates emancipation for African Americans from slavery.

"Juneteenth is basically about liberation, freedom," said Erika L. Green, a member of the East Baton Rouge Metro Council and member of the YWCA board. "It's a special day because we're providing individuals who may not have had the opportunity to pay the cost that they need on minor offenses to get out of jail."

Dianna Payton, CEO of the organization, said the bail fund was created to provide people in pre-trial detention with the chance to continue their lives before being proven guilty or innocent in court.

The District Attorney's Office and the Office of the Public Defender provide a list of those eligible to bond out who can't have their amount reduced. Payton's team then goes through the list and considers the backgrounds and criminal records of each person. They do not provide bond for violent offenders, she said.

Since the death of George Floyd, a Black man who died after a White Minneapolis police officer knelt on his neck for a number of minutes, Payton said the community bail fund has received donations from across the world, including places like the United Kingdom and California.

"After the George Floyd incident we decided to do something to commemorate Juneteenth, the celebration of the end of slavery," Payton said. "It's also a moment to appreciate him and his life."

YWCA members greeted the men and women leaving the prison with bags of food and personal hygiene items. One woman embraced her sister, who had come to pick her up. Another man, Cyrus Chaney, kept shouting out happily, "Hello, world!"

"Juneteenth — that's my independence. That's our Declaration of Independence," he said. "The area that I grew up in, Old South Baton Rouge, they had a program where we were taught a lot of the history."

Chernika Mack, who has been at the jail since early May, was most looking forward to a home-cooked meal with her family. One man, Andrew Baker, said he was caught by surprise by the bailout and is looking forward to rebuilding his life.

"Don't give up hope," he said. "I didn't see this coming from a mile away. I've been on the phone every day trying to bond out. It caught me out of the blue. I look at it as a blessing, so I'm going to take advantage of it."

Ashley Shelton, executive director of The Power Coalition for Equity and Justice, said that there is still more work to be done in the criminal justice system beyond bailout events. Her organization sponsored the initiative.

"Freedom should be free, but we're not free," she said. "We need systemic and structural change to get people their lives back."

As for Parker, he plans to arrive home and surprise his family with his release. He is elated to spend the holiday with them.

"My youngest little girl, it's going to be my first father's day," Parker said, his voice rough with emotion. "I'm just glad."