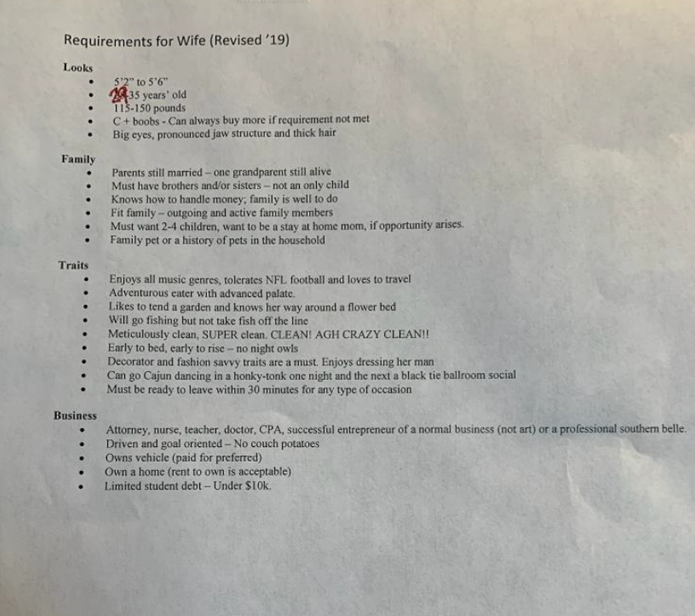 A woman's lawsuit against a company that owns the Alexandria restaurant where she trained to be a manager alleges one executive tricked her into going to his house alone, claimed to others that if he could not have sex with her, he would fire her, and sexually harassed her to the point that she eventually quit.

Samantha Williams' lawsuit, filed in federal court Wednesday, says D'Argent Companies, D'Argent Construction and D'Argent Franchising, are rife with sexual misconduct and that women either put up with the harassment, quit, or are fired if they complain.

According to the lawsuit, one executive required that female employees help him find a potential wife in a certain weight range and with a minimum breast size, and other male executives walked around their offices in boxer shorts while female employees were still on the clock, among other allegations.

The complaint says that, once company officials learned a lawsuit was being planned, they intimidated a witness and tampered with evidence they had been ordered to preserve, including deleting a Twitter account run by one of the executives filled with questionable material.

A lawyer for one of the company executives, Matthew Popp, said the allegations, along with a news release and this article about it, are "nothing more than a smear job against parties, persons, and worksites wholly unrelated to the litigation" and that Williams was seeking to try the case in public.

"This clearly reflects her attorney’s lack of confidence in their case-in-chief. In point of fact, Ms. Williams’s two main witnesses are her live-in boyfriend and a convicted felon," he said. "We very much look forward to litigating this case in a court of law."

'I can do whatever I want to'

Williams began work at the Huddle House restaurant owned by D'Argent Franchises in April 2019 as a server in training for a management position, according to the lawsuit.

Early on, Giallonardo expressed his sexual interest in Williams to her manager, who pointed out that it’s inappropriate for the president of business development and head of human resources for a company to have an intimate relationship with an employee.

“I can do whatever I want to,” Giallonardo said, according to the lawsuit.

The lawsuit spells out a dedicated campaign to coerce Williams into dating him: Giallonardo dropped by the restaurant and tried to hug her, called her pet names and sent her flirtatious text messages she felt uncomfortable fully rejecting because of his position of power at the company.

At one point, the manager said Giallonardo told him: “If I can’t f*** that girl, I’m going to fire her,” the lawsuit says.

Williams’ harassment culminated in an invitation to a barbecue at Giallonardo’s house, where she was allegedly supposed to be reviewed as a prospective manager, the lawsuit says. However, when Williams arrived, she was the only one there and realized the gathering was a setup to get her alone at his residence.

Giallonardo then “pressured her to engage in physical contact,” to the point where Williams left, upset and distressed, the lawsuit says.

"Shaking," she told her manager what happened, according to the lawsuit.

“If you had seen her face when she got back [from being at Giallonardo’s house], you’d think she’d been raped,” her manager was quoted as saying in the lawsuit.

After the incident, Williams texted Giallonardo to make it clear “she was not open to a relationship,” the lawsuit says, which primed Giallonardo to begin to critique her work performance and eventually tell her manager to fire her.

In August, the manager told Williams that Giallonardo planned to fire her within the next week, so she resigned before she could be terminated, the suit says. When Giallonardo discovered Williams quit before he could fire her, he retaliated by drafting a new separation notice that claimed she was fired, then backdated it to the day before her official resignation.

The separation report claims she was terminated for “threatening, abusive, or vulgar language” and “insubordination,” according to documents attached to the lawsuit.

According to the lawsuit, additional, anonymous female employees allege a culture of rampant sexual harassment.

Several former female employees recalled running commentary about women's bodies (including their own), their sexuality or the sexuality of their male bosses.

One administrative assistant said she often heard Justin Giallonardo disparage his girlfriend and discuss other women he had “lined up to date,” the lawsuit says. A former marketing employee said Giallonardo described things done with his girlfriend in a hotel room during a conference.

The allegations also say he wanted female employees to help find him someone to marry, distributing a “Requirements for Wife” document. Criteria included women of a certain weight, “C+ boobs,” “enjoys all music genres, tolerates NFL football and loves to travel,” and “must want 2-4 children, want to be a stay at home mom, if opportunity arises.”

The men in the office did not receive this memo. He did, however, pass the list on to a male manager's fiancée, the lawsuit alleges.

CEO Thomas Giallonardo III, Justin’s father, also created a hostile work environment, according to the lawsuit. An administrative assistant who worked as the senior Giallonardo’s personal assistant for six months witnessed him boasting about a sexual encounter with an underage girl while abroad and was asked to find her boss sexual partners on a site for “women who would have sex for compensation,” billed as “The Official Sugar Daddy Site.”

Other Giallonardo relatives were also implicated in the filing. One woman described how she witnessed Roland Giallonardo, Justin’s uncle, rubbing the shoulders of female employees when visiting the office. A former coordinator at the company said the other Giallonardo brother, “Tommy,” also made comments about her physical appearance.

Another assistant recalls multiple male executives, including Justin Giallonardo, urinating on a specific plant in the courtyard. At one point, the plant was brought inside “leaking with urine” and a different assistant “was told to clean it up.”

Other allegations among former employees include both the senior Giallonardo and Justin watching pornography on their work computers, the two walking around the office in their boxers with female employees present and Justin spying on female employees using the company security cameras while making inappropriate comments.

One of the women told Justin that he would one day get sued for his behavior, but “he would laugh or tell her, ‘what happened at D’Argent stays at D’Argent,’” the lawsuit says.

The lawsuit also claims the defendants destroyed evidence, after being told to preserve material, by deleting a Twitter account that included tweets by the senior Giallonardo complaining about Black people, transgender people and Dr. Martin Luther King Jr.

The lawsuit also alleges D’Argent filed a felony theft complaint against a former manager who purportedly witnessed some of the events.

Minia Bremenstul, an attorney for D'Argent Companies and D'Argent Construction, said those two companies should not have been sued because Williams did not work for them. "They otherwise have no comment on the allegations at this time," she said.