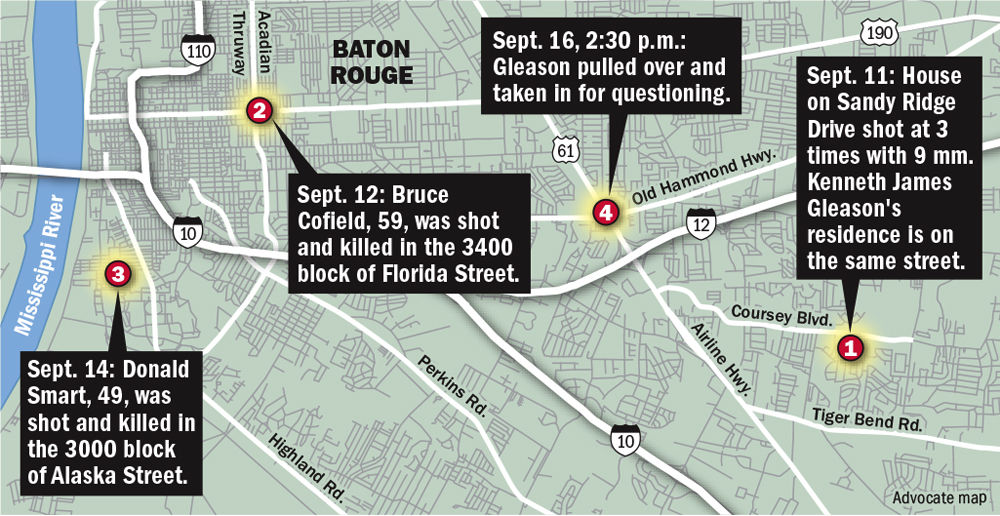 Nine hours after three shots were fired into a black family's Sandy Ridge Drive home just after midnight on Sept. 11, 2017, a worker at a Coursey Boulevard Jiffy Lube a half-mile away saw a white man in a red car remove a gun from a mulched area at the store, a sheriff's detective testified Wednesday in the case of alleged serial killer Kenneth Gleason.

The worker later identified the man as Gleason, who lives on Sandy Ridge.

Then on Sept. 12, 2017, nine hours before Bruce Cofield, a black man, was shot to death while sitting at a bus stop, employees of a surveillance firm spotted a white man with a gun in a parking lot removing the license plate from a red car and putting duct tape over the car's identifying markings, a police detective also testified.

Over the objection of Gleason’s attorney, state District Judge Beau Higginbotham ruled Wednesday that the Jiffy Lube and Custom Security incidents — described by an East Baton Rouge Parish prosecutor as "integral acts" in the murder cases — can be used as evidence at Gleason's trial in March.

In Kenneth Gleason murder case, other alleged racially-charged shootings could be used as evidence

Gleason, 24, of Baton Rouge, is accused of fatally shooting Cofield, 59, and another black man, Donald Smart, 49, two days later. Gleason is also charged with firing into the home of the black family who lived three doors down from him on Sandy Ridge, a day before Cofield was killed.

Gleason will be tried March 11 in Smart's slaying, but the jury also will hear evidence about the Cofield killing and the Sandy Ridge incident.

Chris Alexander, who represents Gleason, told Higginbotham he had no objection to prosecutor Dana Cummings bringing up the Sandy Ridge shooting at Gleason’s trial.

Prosecutors chose not to seek the death penalty against Gleason if he's found guilty of first-degree murder. A conviction on that charge would carry a mandatory sentence of life in prison.

Alexander argued there’s no proof Gleason was involved in the Jiffy Lube or Custom Security incidents, and mentioning those matters in front of a jury would prejudice him.

East Baton Rouge Parish sheriff’s Lt. Scott Henning testified that a Jiffy Lube employee did positively identify Gleason, after his arrest, as the man she saw remove a black handgun from landscaping on the store’s grounds.

Cummings suggested Gleason “dumped” the gun at the Jiffy Lube after the Sandy Ridge shooting and then returned to the store to retrieve it. Alexander scoffed at her suggestion.

Henning said a neighbor called 911 after hearing the shots on Sandy Ridge and then went outside, where he saw Gleason standing near Gleason’s home. The man asked Gleason if he heard gunshots, and Gleason replied he heard nothing, the detective testified.

Saundra Watts, a Baton Rouge police detective, said the Custom Security incident happened at 1:30 p.m. on Sept. 12, 2017, and Cofield was fatally shot later that day at 10:30 p.m. The report police received from Custom Security was of a “nervous” white male removing the license plate from his red car and covering the car’s identifying markings with duct tape. No one immediately responded to that call.

“He was covering up the identifying features on his car to go and commit a cold-blooded murder,” Cummings told Higginbotham.

Several days later, after seeing an article in The Advocate, the company manager called police and video footage of the incident was turned over to them, Watts said. The video shows a gun in the man’s hand at one point, she said.

“That video was very instrumental. It was crystal clear. You could see the car perfectly,” Watts testified.

When Gleason was taken into custody, the red car he was driving had the same dent in the back bumper and an American flag sticker shown on the video, East Baton Rouge Parish District Attorney Hillar Moore III has said.

Watts said Cofield was shot as he sat at a bus stop on Florida Street near South Acadian Thruway. A witness told police a white male got out of his car and shot Cofield, who then rolled into the street. The shooter then stood over Cofield and fired more shots. Watts said 10 bullets were recovered from the victim’s body. Thirteen shell casings were recovered from the scene, she said.

Smart, who was killed before he could work his overnight shift at Louie’s Café, was shot shortly after 11 p.m. on Sept. 14, 2017, at the Alaska Street BREC park on the back side of the LSU campus, Watts said. Two LSU students in the park at the time told police a man drove up in a red car and shot Smart. The shooter then got out of his car, walked over to the victim and continued shooting. The detective said four bullets were taken from Smart’s body. Ten shell casings were discovered at the scene, she said.

‘This is wrong': Popular Louie's Cafe worker remembered as hard-working, 'whistle as you work' guy

Watts acknowledged that some descriptions of Cofield’s and Smart’s killer included that he was bald, which Gleason is not, and that he could have been a white male or light-skinned black male. No one has identified Gleason as the killer of Cofield or Smart, she said.

Watts noted, however, that DNA from casings at the Cofield crime scene matched Gleason’s DNA.

The State Police Crime Lab has determined that the casings recovered from all three shooting scenes were fired from the same 9 mm gun. The gun used in the shootings has not been found.

Gleason did buy a 9 mm handgun in November 2016, Watts said. Also, Gleason bought a suppressor in July 2017, but she said there is no evidence a suppressor was used in any of the shootings.

Kenneth James Gleason, a white man accused in the shooting deaths of two black men and of firing a gun into the home of a black family in thre…